Home » World News » Pushing back against China will take global effort ‘not seen for many decades’: Morrison

Paris: Overcoming the challenge of China and pushing back against anti-market forces will require a global effort “not seen for many decades,” Prime Minister Scott Morrison has predicted on the final day of a whirlwind international trip.

In an address to the Organisation for Economic Co-operation and Development, Morrison warned rising tensions in the Indo-Pacific were a threat to the financial prosperity of other nations and called on leaders to “defend a world order that supports freedom”. 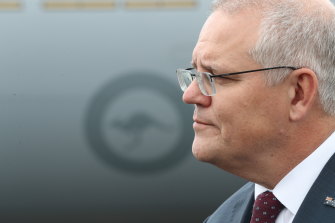 “The global trading system and rules-based order is under serious strain and threat,” he said.

“Meeting these challenges will require a degree of active cooperation not seen for many decades.”

Morrison spoke about climate change and the coronavirus pandemic at the Paris-based body but said the defining issue for global and regional stability, security and prosperity was the escalating great power strategic competition, including in the Indo-Pacific.

“Rapid military modernisation, tension over territorial claims, heightened economic coercion, undermining of international law – including the law of the sea – through to enhanced disinformation, foreign interference and cyber threats, enabled by new and emerging technologies,” he said. 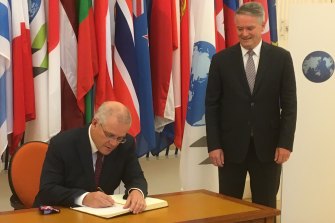 “At this moment in history, international institutions like the OECD – institutions founded, I stress, on our shared liberal democratic, market-based values – they’re more important than ever for stability in the world and various regions from which we come.

“Australia’s prosperity rests squarely on maintaining our position as an outward-looking, open trading economy. We will never overcome our present challenges by relinquishing the hard-won lessons of the past.”

The visit was a reunion for Morrison and his former finance minister Mathias Cormann, who now runs the organisation after winning a six-month leadership contest which pitted him against nine other candidates from around the world.

The Belgian-born ex-senator is the first person from the Asia-Pacific region to hold the top international post.

The OECD emerged from the post-war Marshall Plan and plays a key role in shaping the international economic agenda. 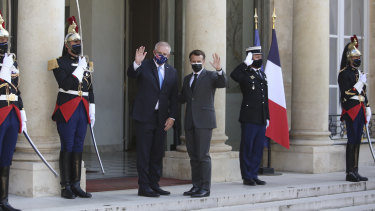 “I would like to reiterate how committed France remains to defending the balance in the Indo-Pacific region and how much we consider the partnership we have with Australia to be at the heart of this Indo-Pacific strategy.

“As a token of friendship and solidarity, and as we discussed together during the G7, we firmly reject any coercive economic measures taken against Australia in flagrant violation of international law.“

Macron did not name any country specifically but his unusually strong language and repeated mentions of the Indo-Pacific were obvious references to China.

His comments represent of the strongest public backing of any world leader since the disintegration of the relationship between Canberra and the rising superpower.