Keeping COOL Britannia! From plunging into fountains to stripping down to their unmentionables… how Britons weathered the punishing heatwaves of old

The hot weather this summer that is reaching its peak today and tomorrow has prompted warnings that the UK could see its hottest day in history.

Temperatures could rise as high as 43C (109F), according to the Met Office’s chief executive.

But this year’s hot weather is not the first time that Britain has been subjected to fierce heat in the summer months.

Stunning images from previous heatwaves in the 20th century show how Londoners and Britons elsewhere around the country coped with the hot weather.

One, taken during the heatwave in England in 1952, shows a 20-year-old usherette shocking commuters in London’s Piccadilly as she walked to work in just her underwear.

Another, taken when temperatures soared during the summer of 1935, shows a flustered bus conductor wiping the sweat from his forehead – as his driver colleague downed water from a bucket.

A third reveals the tactics people used to cool off in the famous ten-week heatwave of 1976, with a young man seen diving into the fountains of Trafalgar Square. 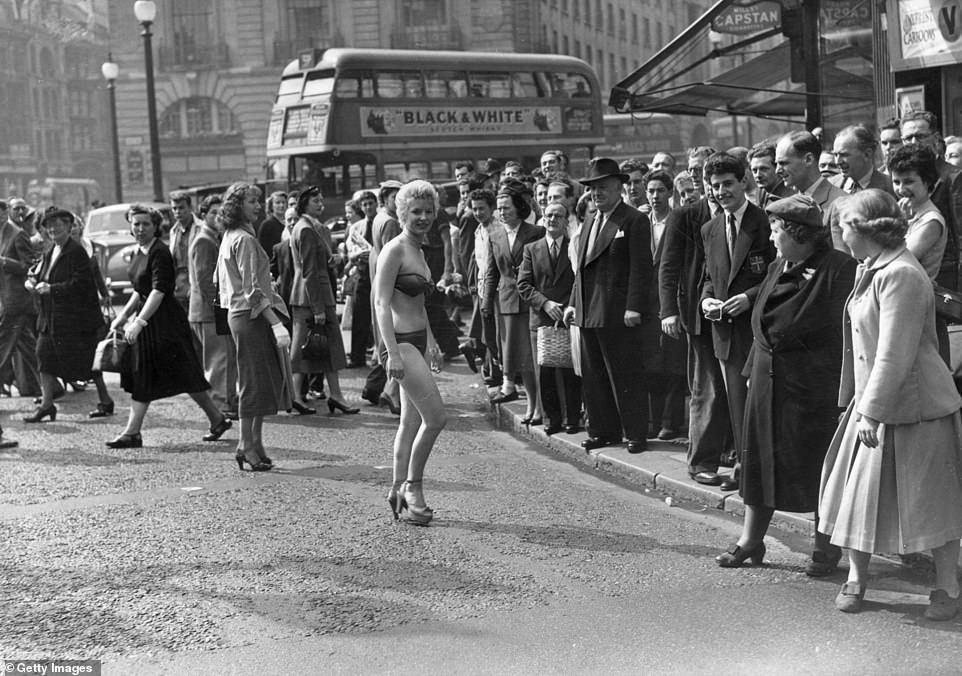 Stunning images from previous heatwaves in the 20th century show how Britons coped with the hot weather. One, taken during the heatwave in England in 1952, shows a 20-year-old usherette shocking commuters in London’s Piccadilly as she walked to work in just her underwear 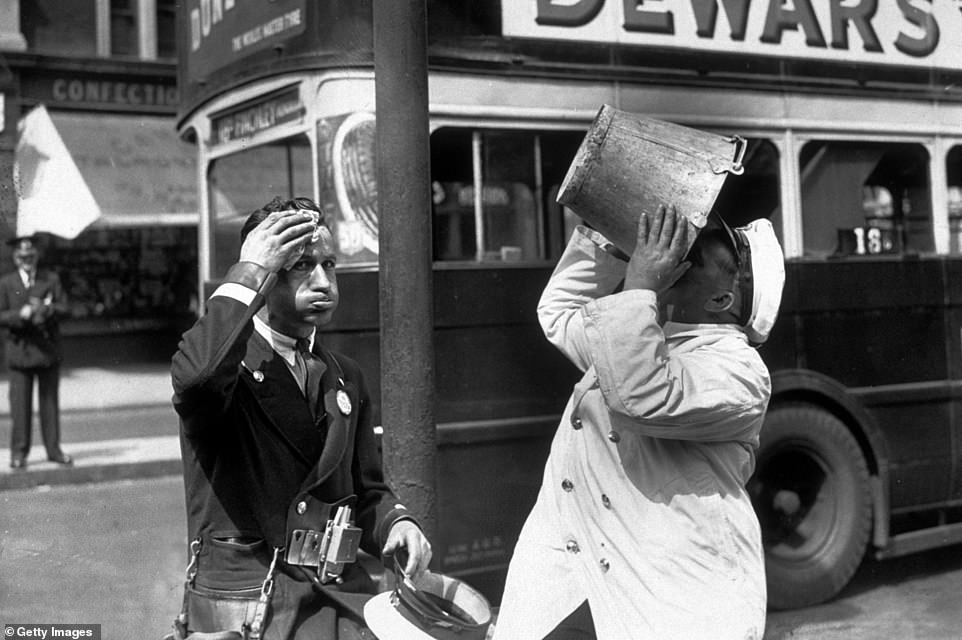 1935: A flustered bus conductor wiping the sweat from his forehead – as his driver colleague downs water from a bucket 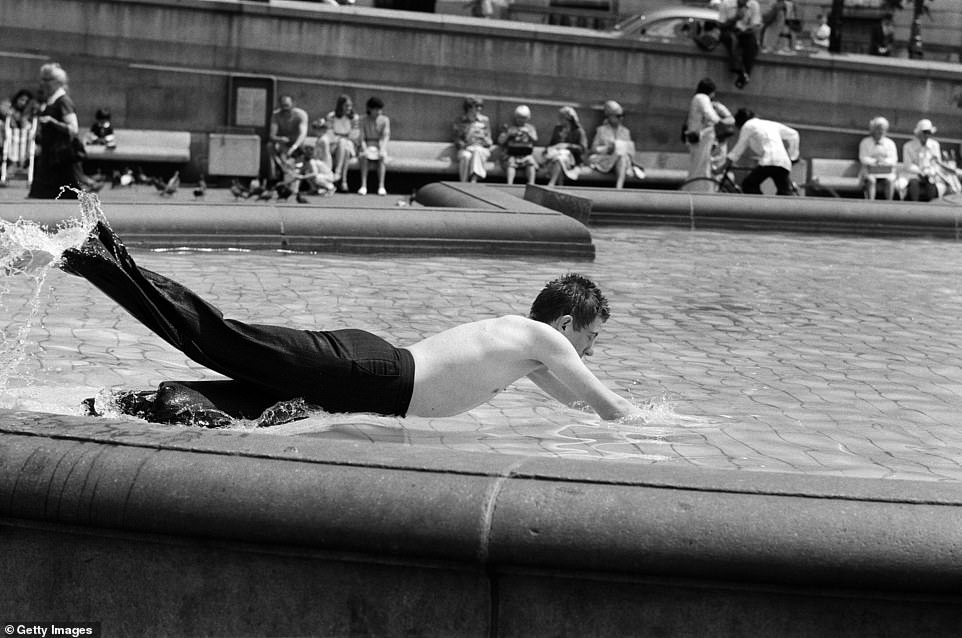 1976: A young man dives into the fountain at Trafalgar Square in Central London in an attempt to cool off. During the heatwave of 1976, there were 15 consecutive days that saw temperatures of 89.6F (32C) somewhere in the UK. Overall, there were ten weeks of blazing heat before temperatures finally abated 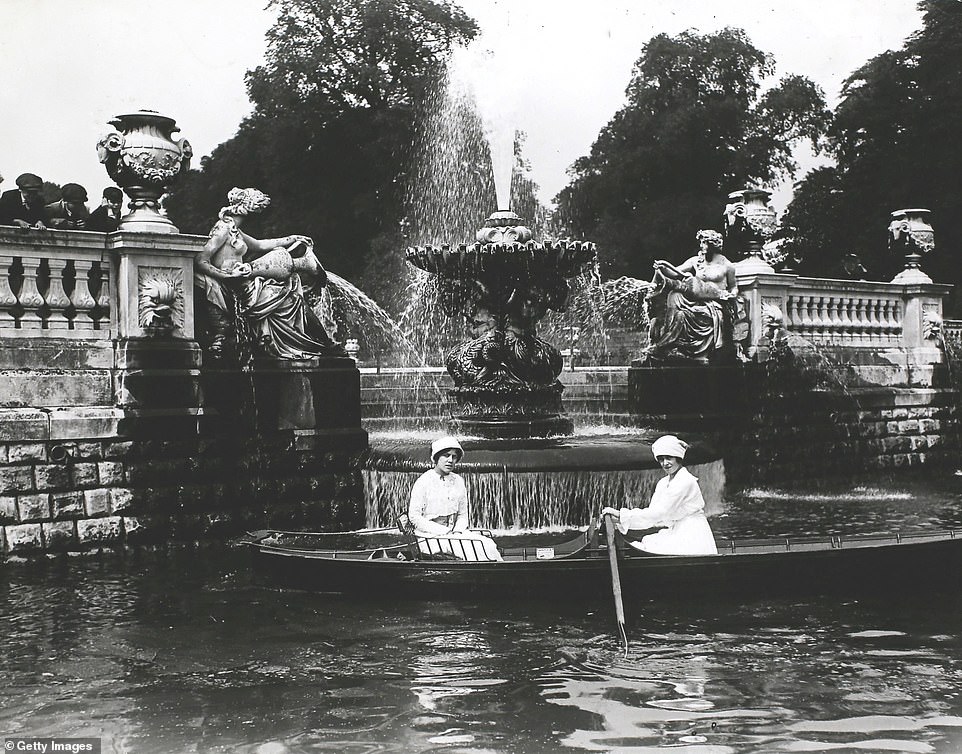 1914: Two young women, helped by their white summer dresses and hats, try to cool off with a boat ride on the Serpentine in London’s Hyde Park 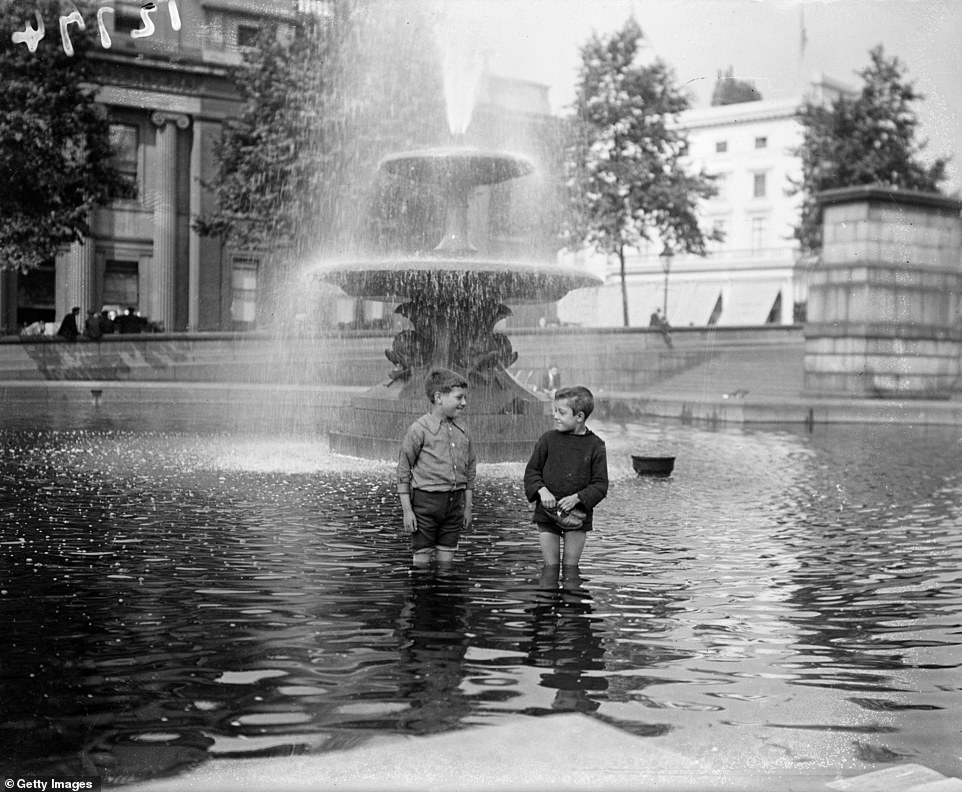 1919: London schoolboys dressed helpfully in shorts bathe in the fountain at Trafalgar Square during hot weather in 1919 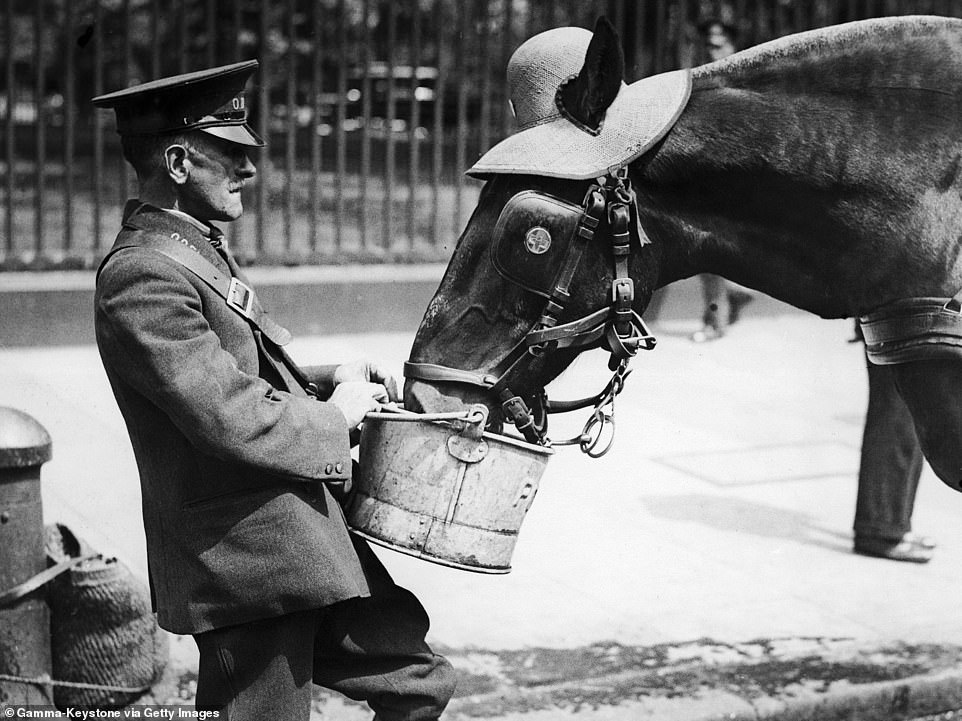 1930: This horse, seen being given a drink of water, has its own custom-made sun hat to help it cope with the heat during the summer of 1930 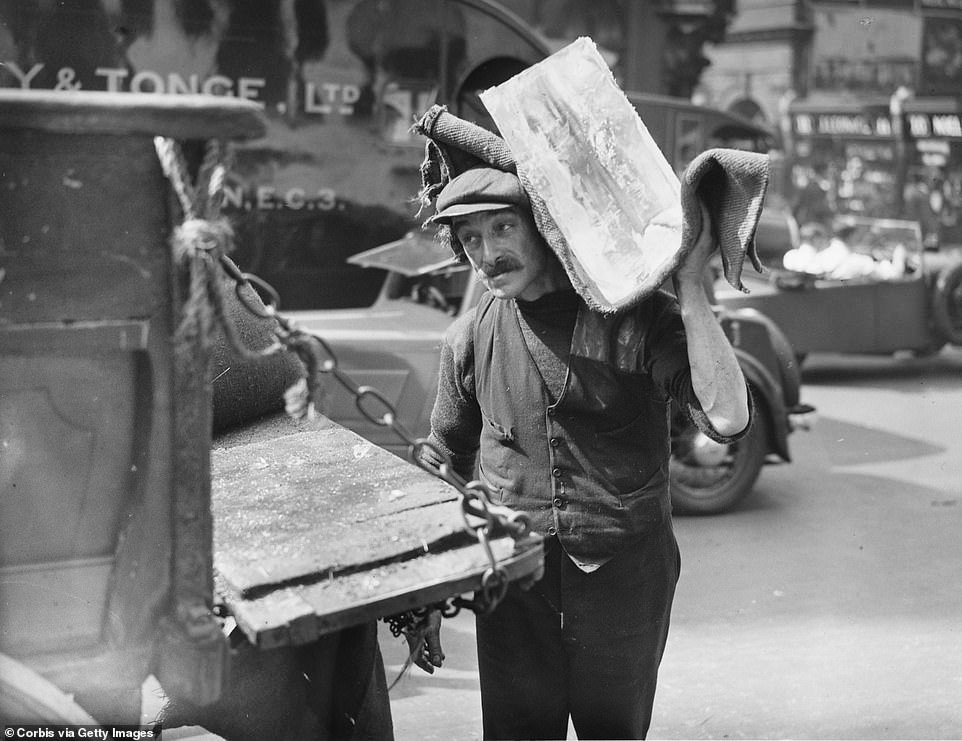 1932: As Britons took innovative measures to cool down, this  man delivering ice during the hot weather looked as though he was struggling 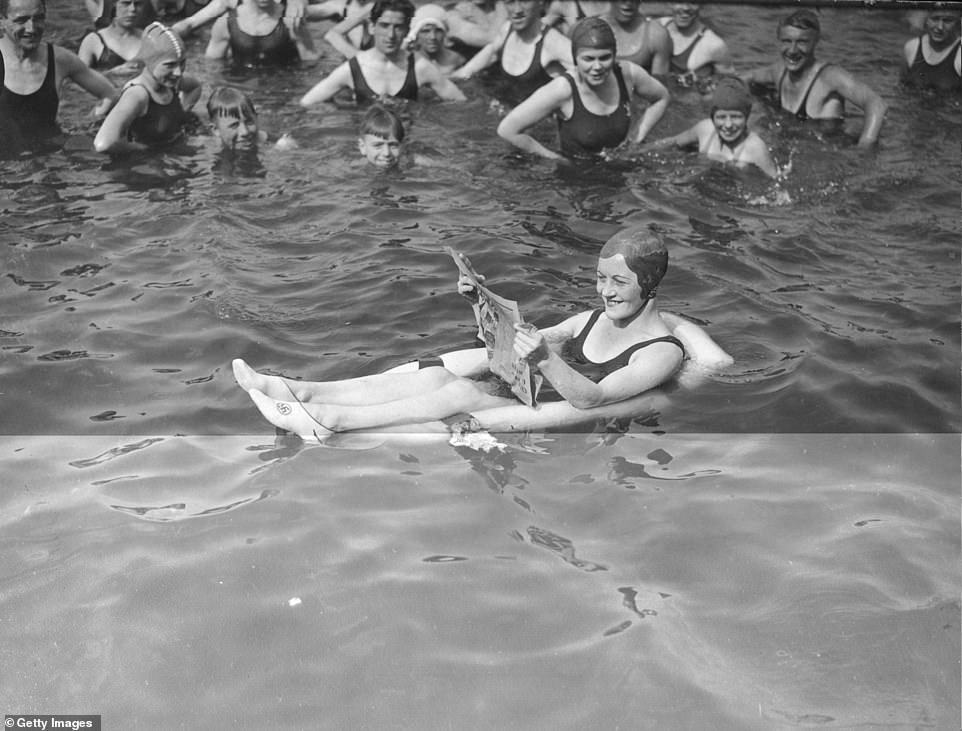 1932: A swimmer in Hyde Park reads the newspaper whilst resting on a lilo, as others behind her look delighted to be caught in the camera’s view 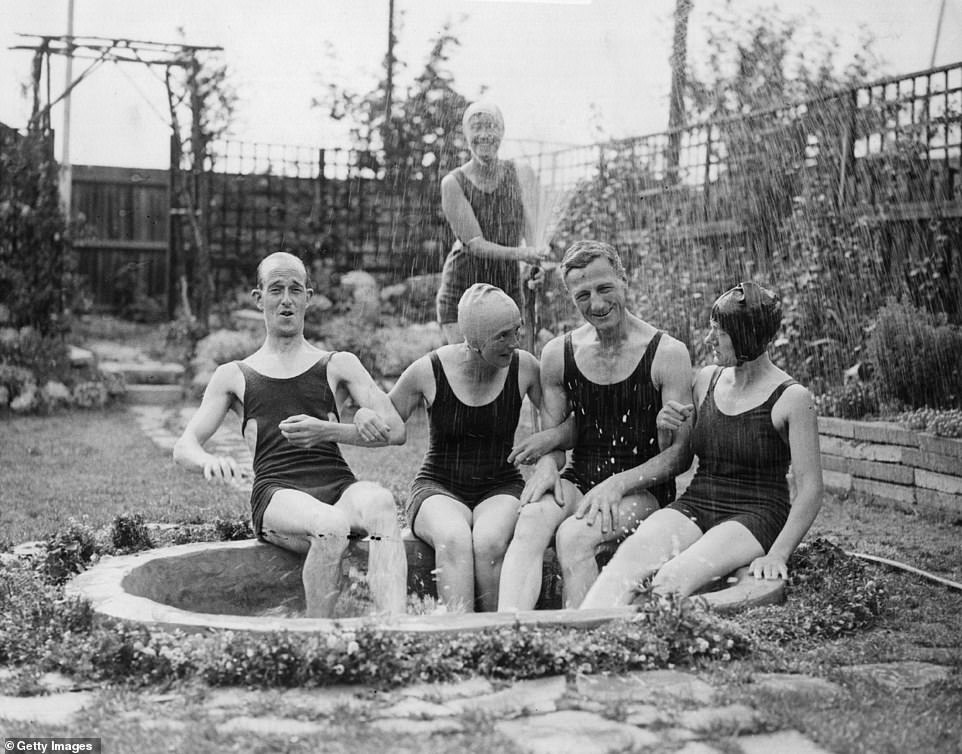 1933: Men and women are seen cooling off in a garden pond whilst wearing their swimwear, as they get added relief from water sprayed from a hosepipe. The image was taken in a garden in Streatham, south London 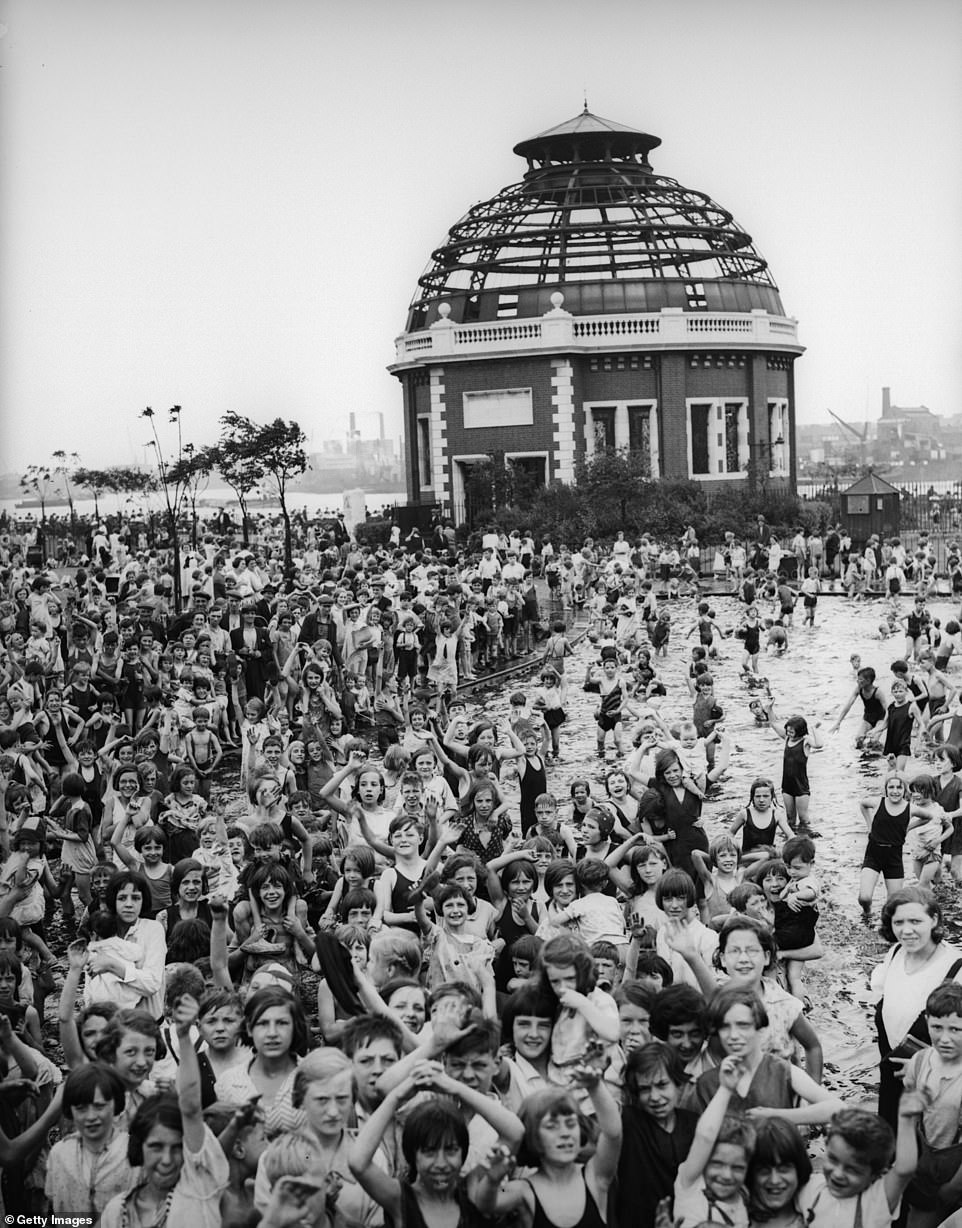 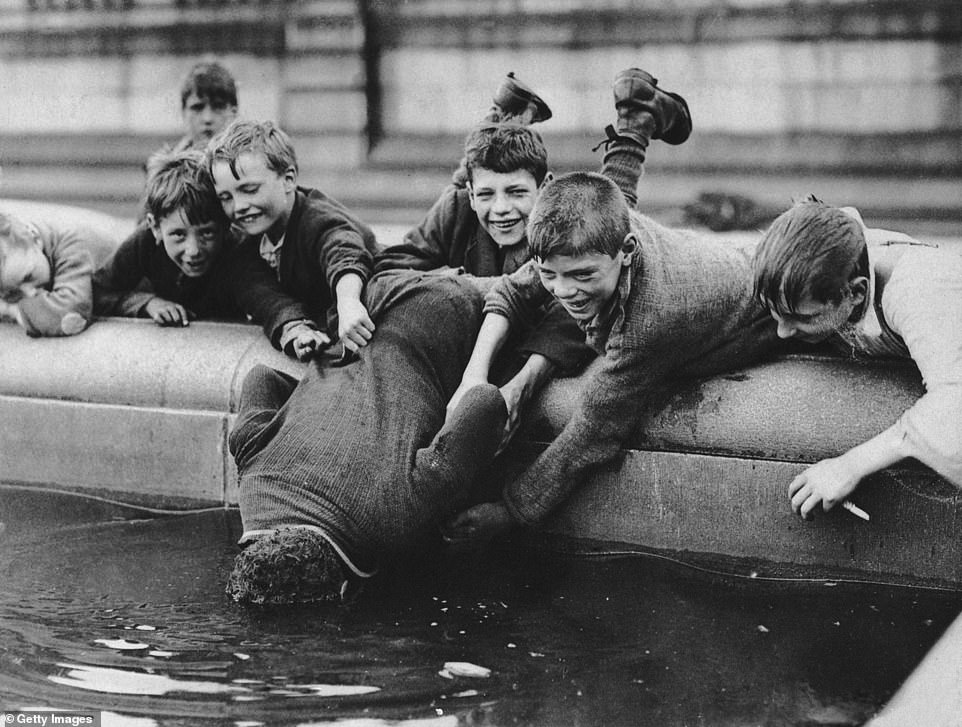 1935: Mischievous young boys are seen holding onto their friend as he dunks his head into one of the fountains in Trafalgar Square 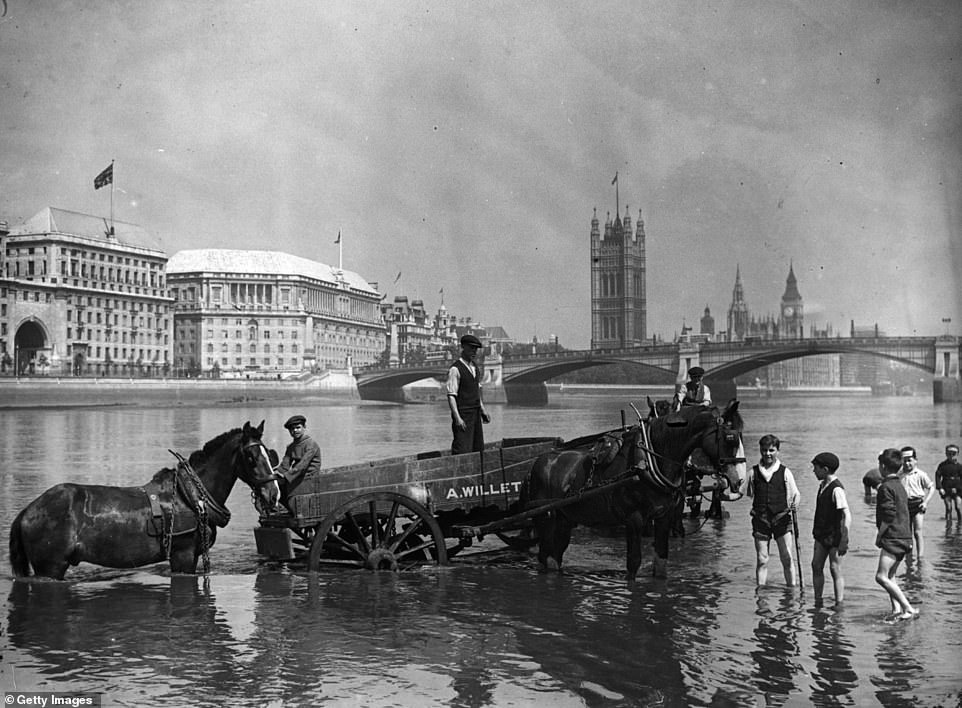 1935: These Londoners are seen making use of shallow waters on the edge of the Thames to cool off during the hot weather 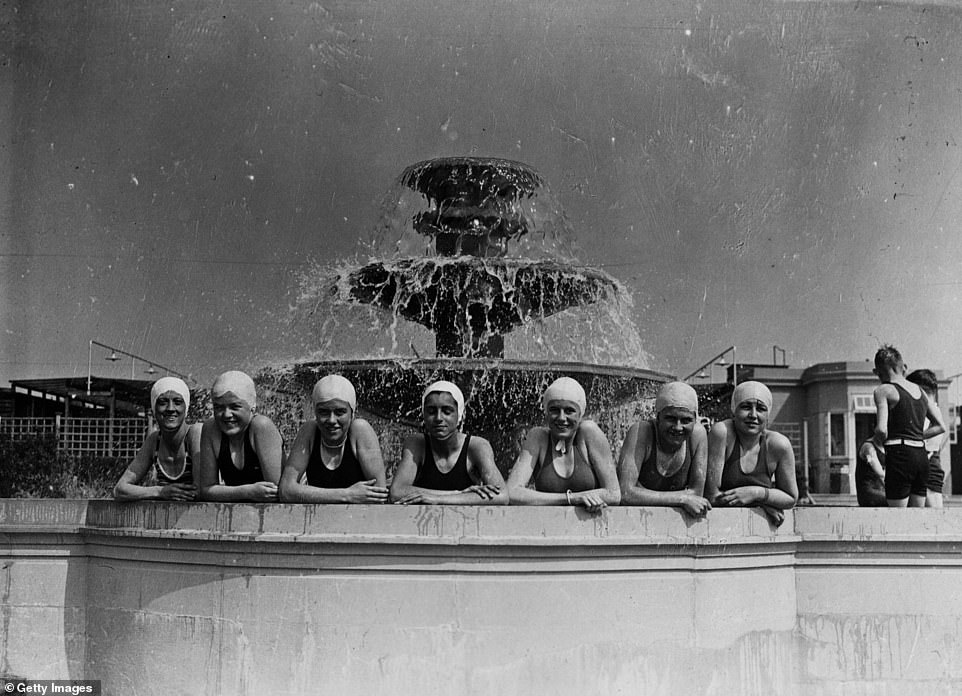 1935: The summer heatwave prompts bathers to crowd into the outdoor swimming pool at Finchley, London 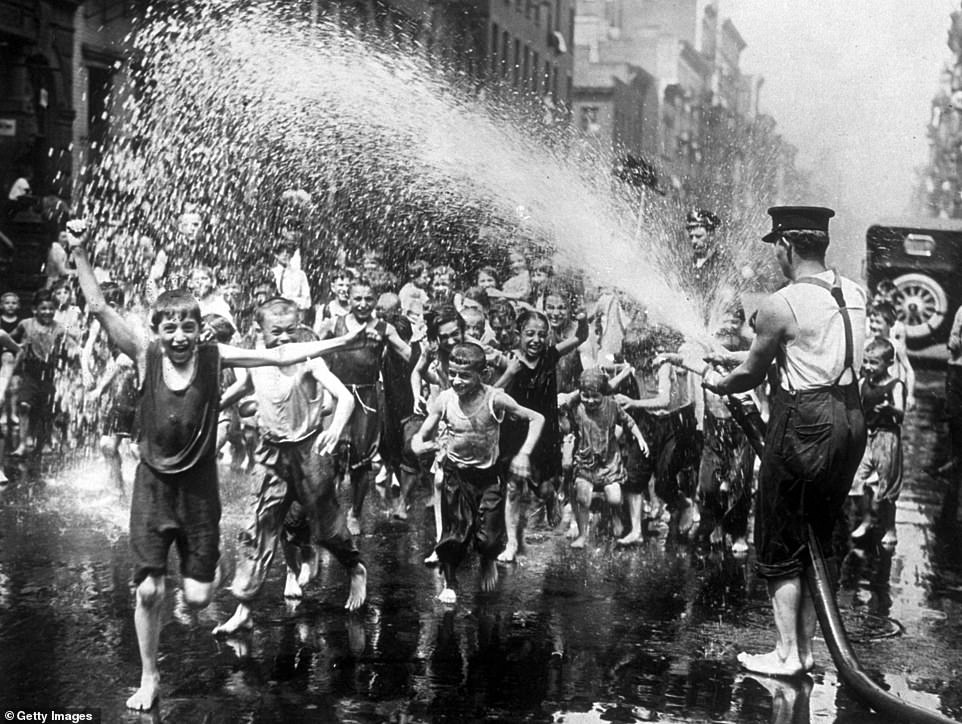 1935: A group of children enjoy getting a hose down from a fireman in London during the hot summer in 1935 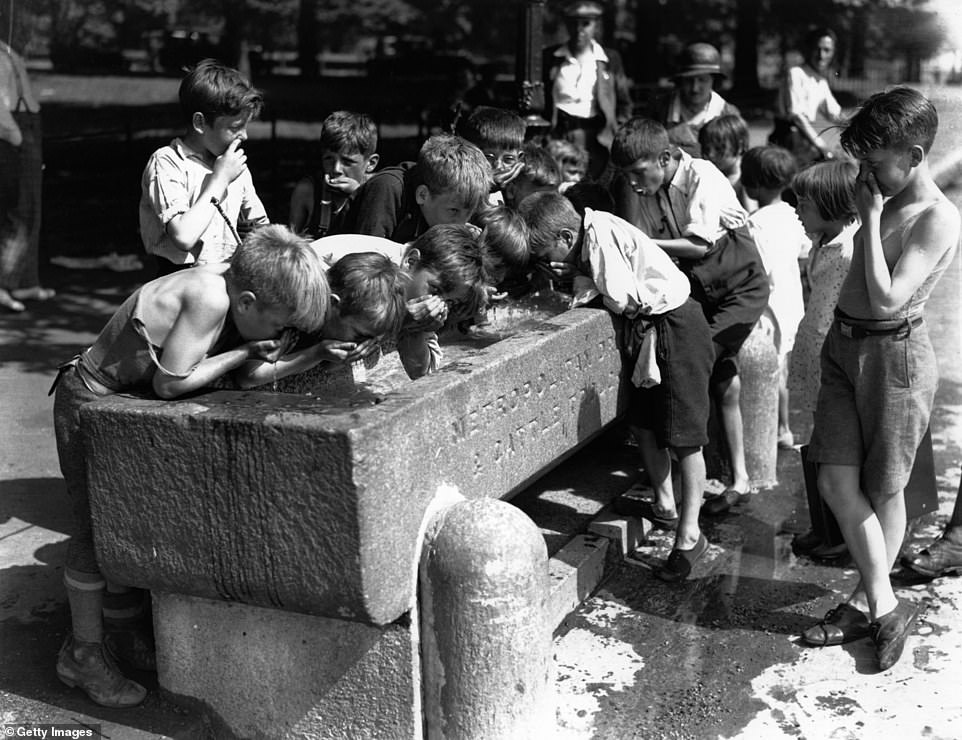 1935: Children cooling off in a horse trough in Hyde Park during the heatwave that year. Unlike today, there were no warnings from health officials to stay inside 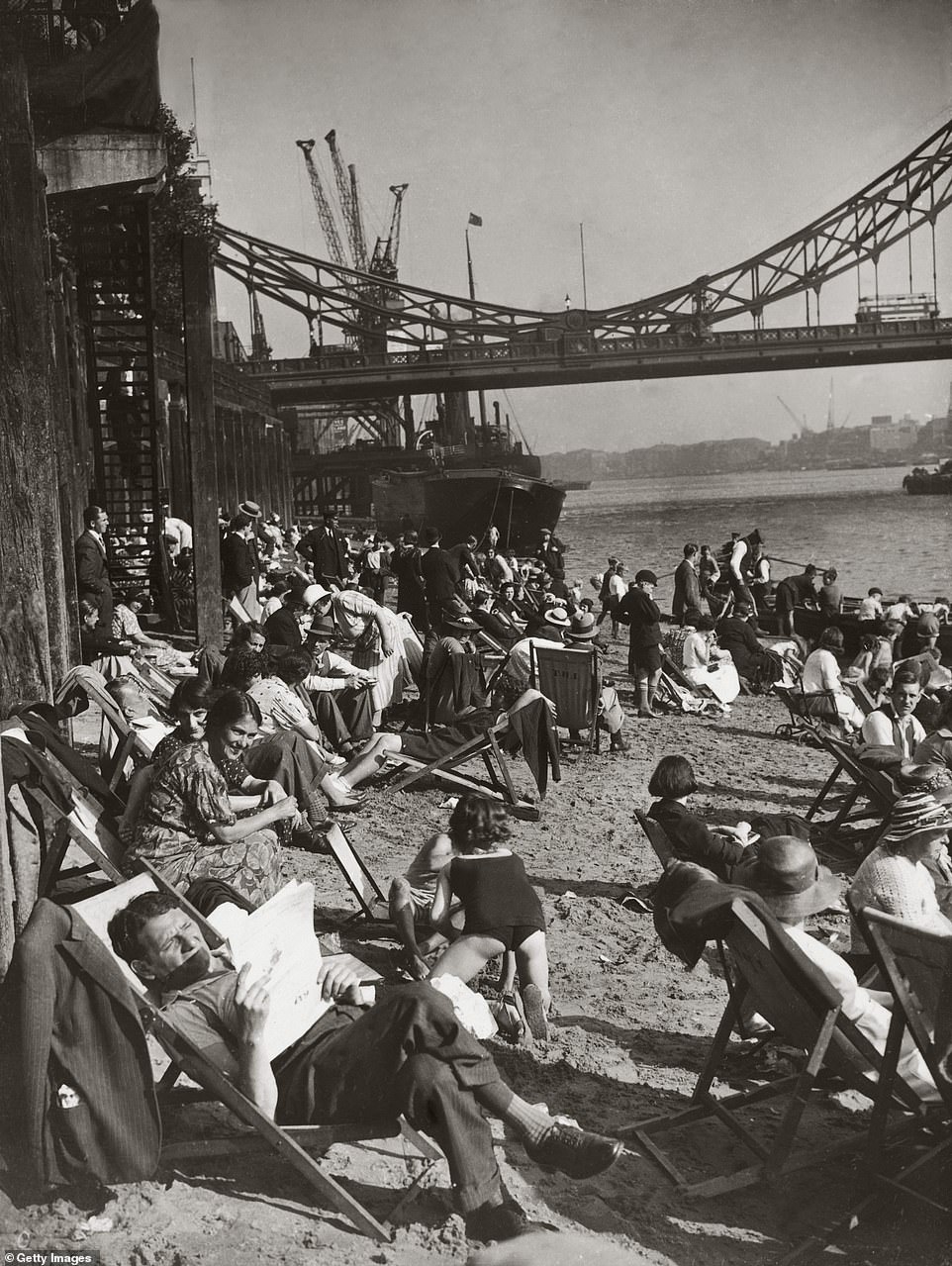 1936: Holidaymakers enjoying the sun on Tower Beach near the Tower of London, when the sandy areas on the Thames were popular as beaches 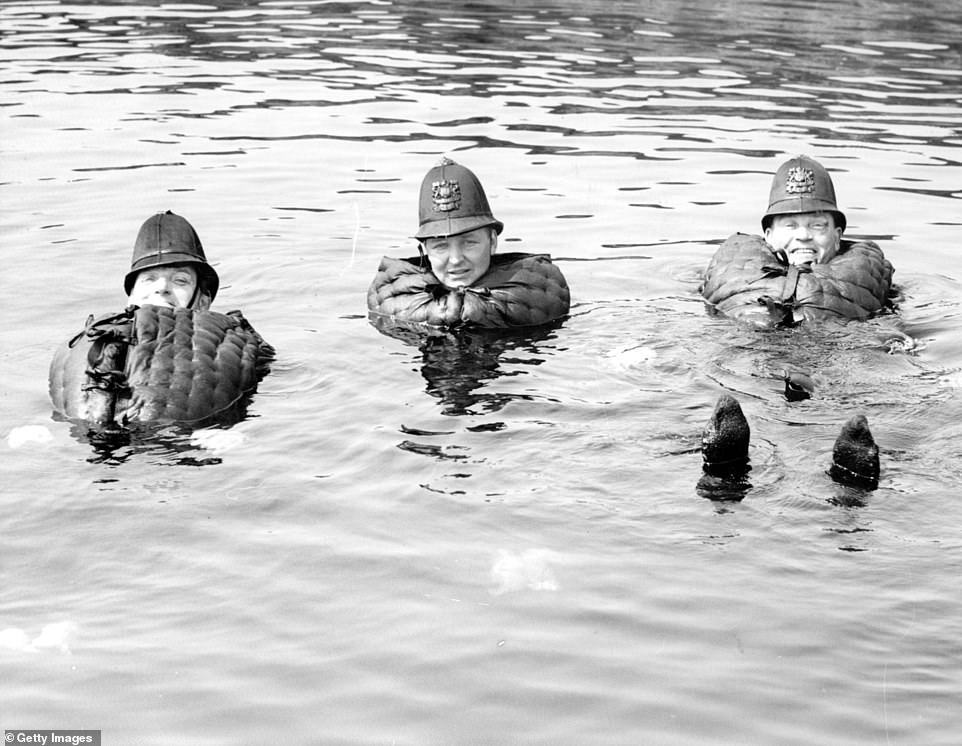 1937: Three Port of London Authority policemen enjoying their duty of testing life saving jackets on a hot summer’s day in the West India Dock in the East End 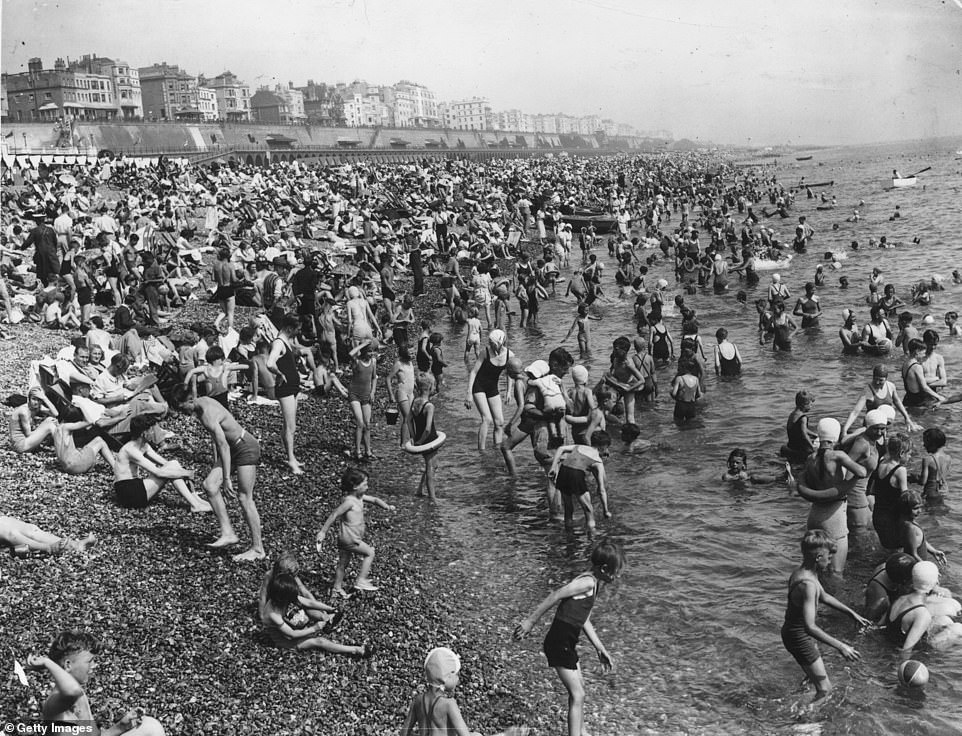 1937: The water’s edge crowded with bathers young and old on Brighton’s stony beach in East Sussex during hot weather 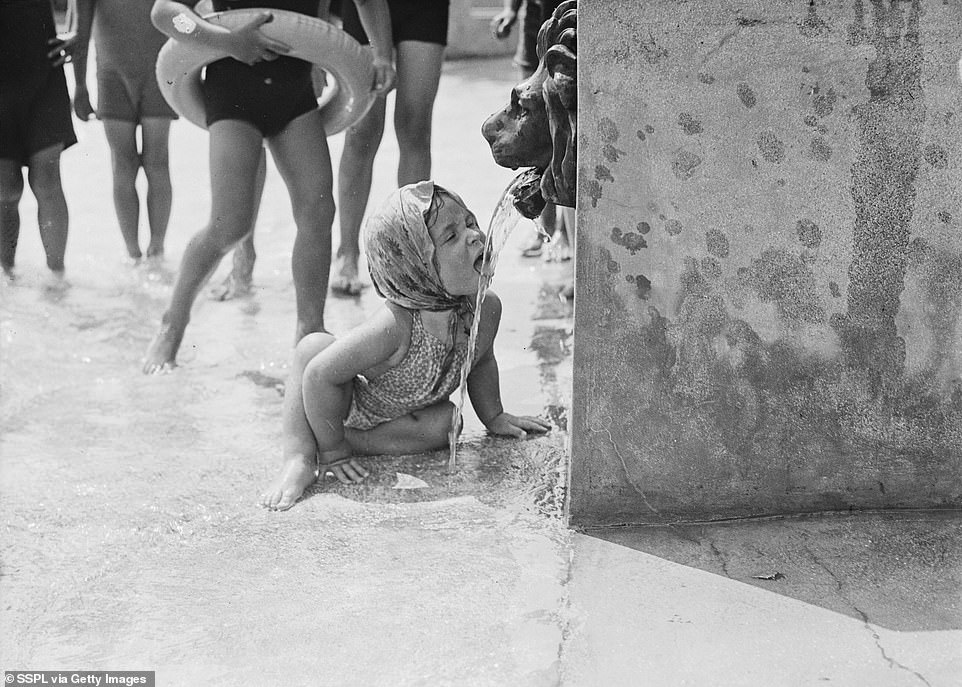 1937: A little girl drinks from a fountain at the outdoor swimming pool in Finchley, north London. The image was taken for the Daily Herald newspaper 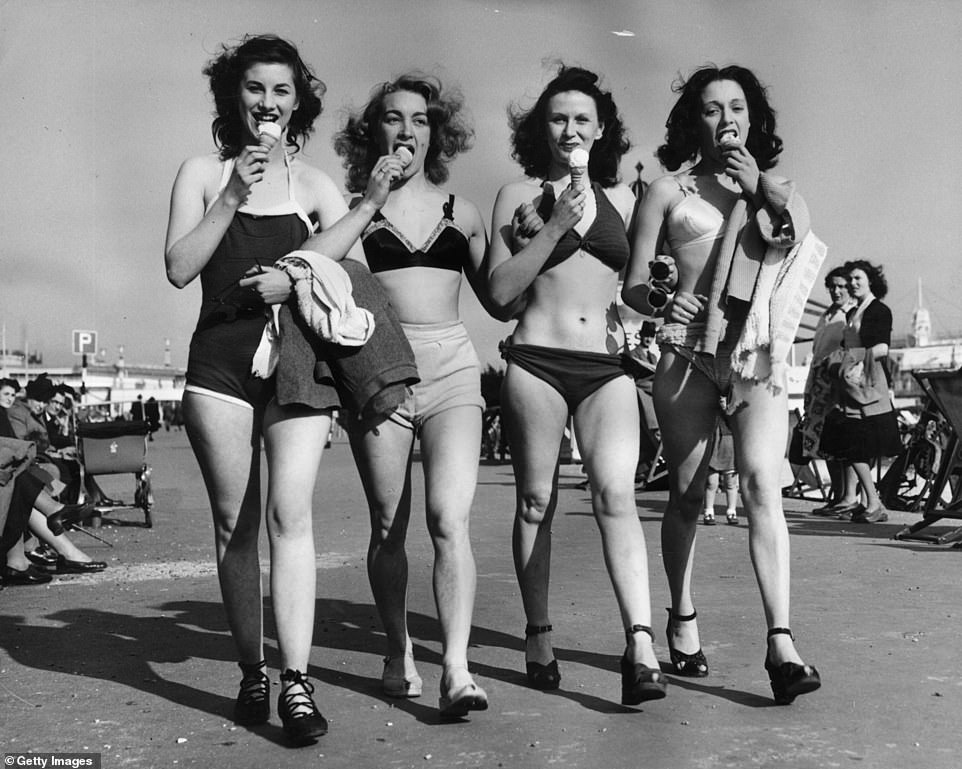 1951: Four revue dancers strolling along the front at Southend on Sea in Essex dressed for the hot weather and ejoying an ice cream 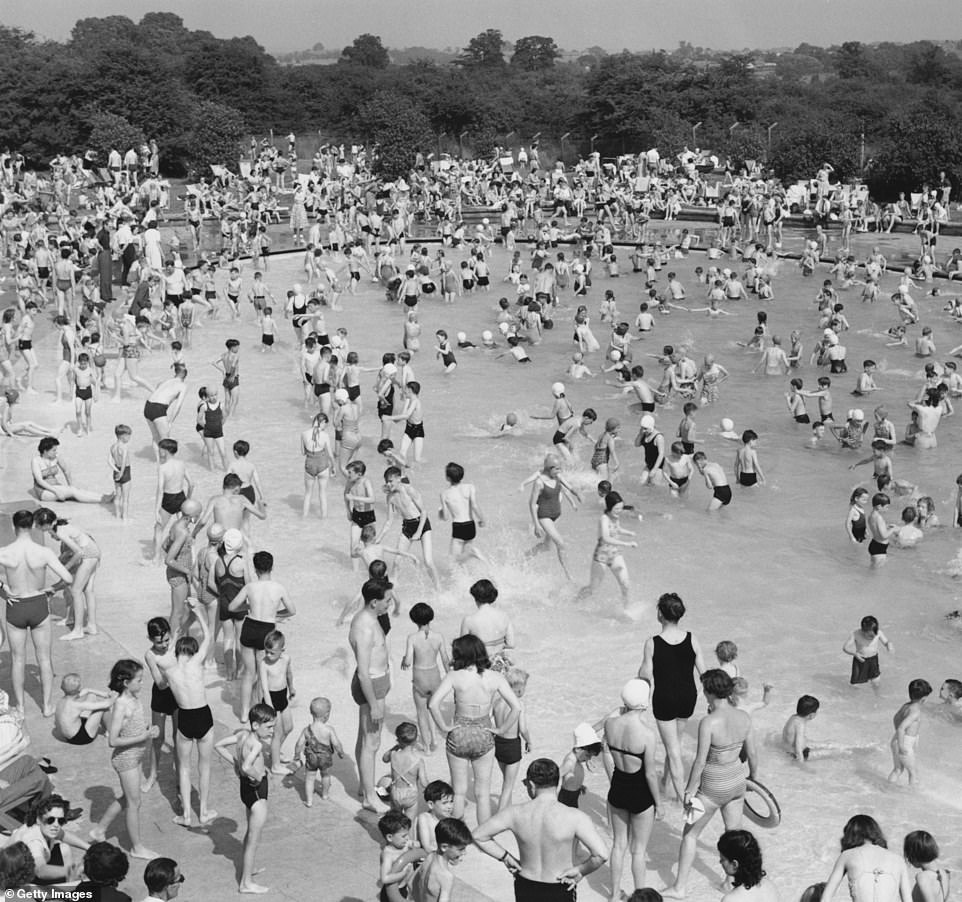 1952: Crowds at the open-air children’s pool at Finchley Lido in North London, during the summer heatwave 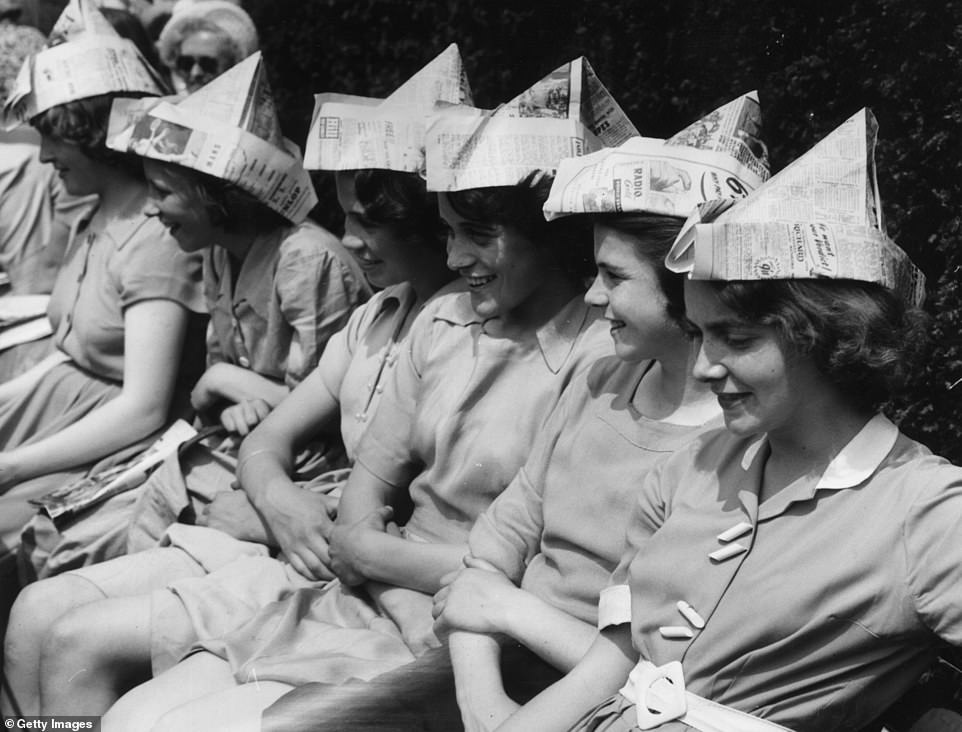 1953: Schoolgirls from Gravesend Grammar School wear newspaper hats to protect them from the sun while they are watching Wimbledon during a heatwave 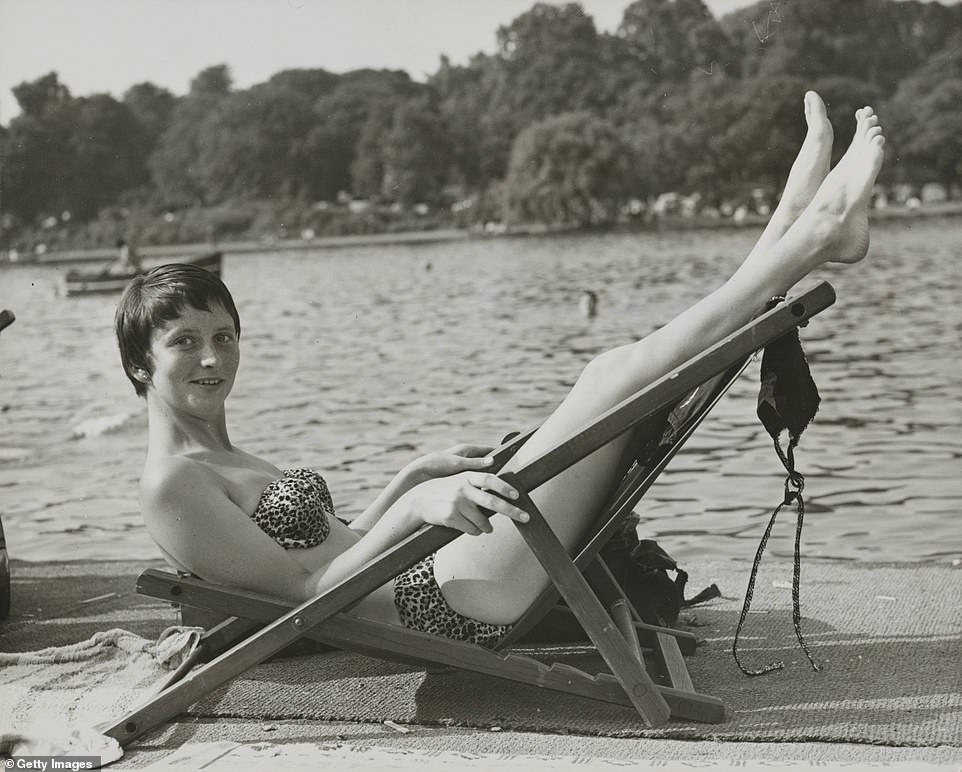 1958: Despite weeks of rain during the summer of 1958, the sun did eventually come out, prompting this bather to use a deck chair in an innovative way as she relaxed next to the Serpentine in Hyde Park 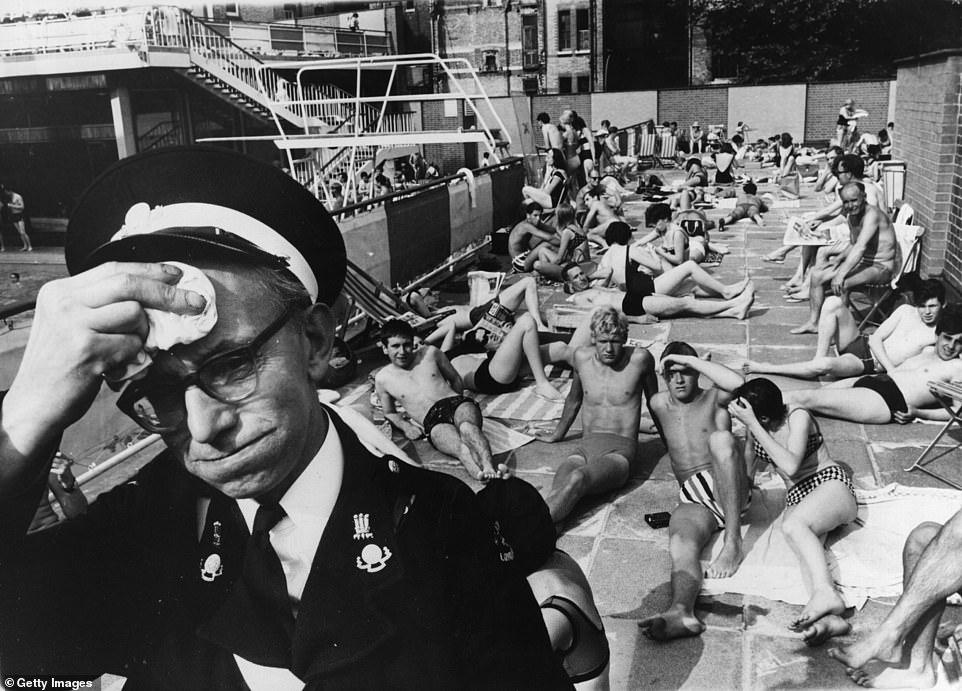 1964: A paramedic on duty at the Oasis outdoor swimming pool in Holborn, Central London, is seen wiping his brow as he attempts to cope with the heat. Meanwhile, tanned Londoners lie in their swimming trunks as they soak up the rays 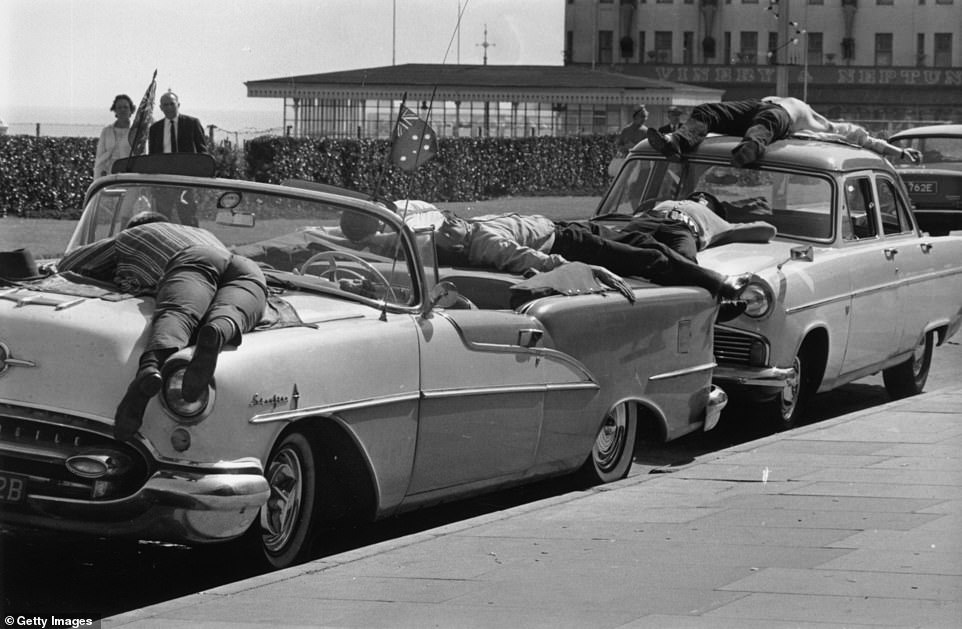 1967: Holiday makers in Clacton-on-Sea, Essex, relax in the heat by lying on top of their parked cars, as a bemused couple looked on 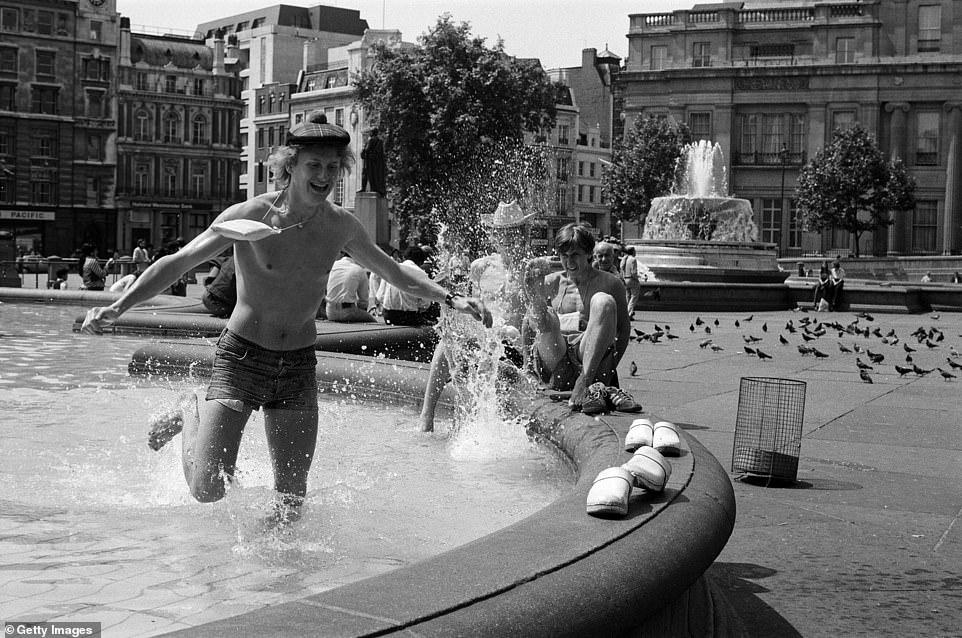 1976: Despite it being illegal to bathe in the fountains of Trafalgar Square, that did not stop this man, who was seen splashing about in the shallow waters during that year’s ten-week heatwave 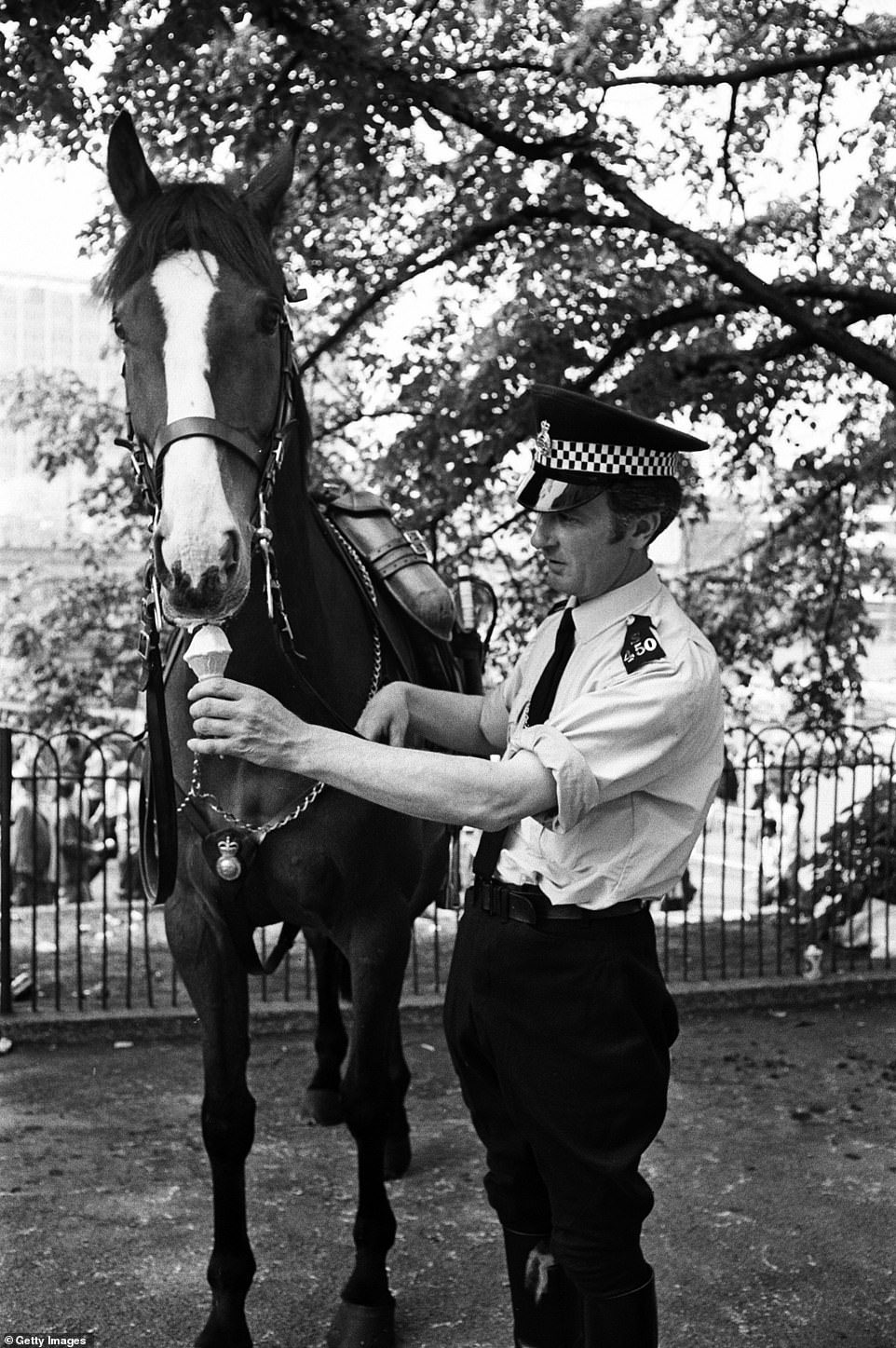 1976: This policeman helped his appreciative horse to cool off during the heatwave of 1976 – by giving it a lick of his ice cream 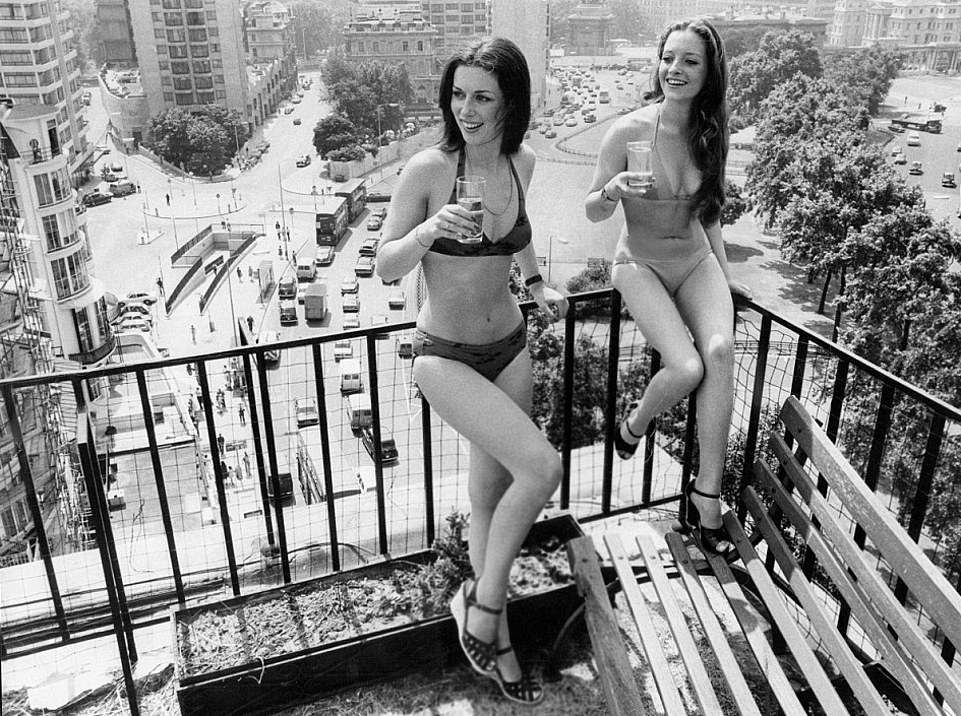 1976: Bikini-clad women are seen enjoying the hot weather in 1976. That year, there were 15 consecutive days that saw temperatures of 89.6F (32C) somewhere in the UK