Bedlam at UK Borders: Passengers are left ‘terrified of catching Covid’ while crammed into Heathrow immigration queue for more than three hours next to hundreds just landed from India

Passengers flying into the UK today faced ‘bedlam’ at the borders with some facing a three hour wait – with some left standing next to Red List arrivals.

Heathrow travelers have told MailOnline how they were ‘terrified of catching Covid’ while being crammed into the airport’s border hall this morning.

Some even claim they were left standing next to arrivals from Covid-ravaged India while in the three hour long queues.

It comes as thousands of Britons today rushed to the airport to leave the country after the international travel ban was lifted this morning.

But as thousands jetting off to the likes of Portugal joined orderly queues in the departures area today, those in arrivals faced chaos at the border.

One of those stuck in the queue told MailOnline: ‘I arrived back in the country from South Africa today – one of the Red Listed countries.

‘I was more terrified catching Covid while going through boarder control than walking around South Africa. 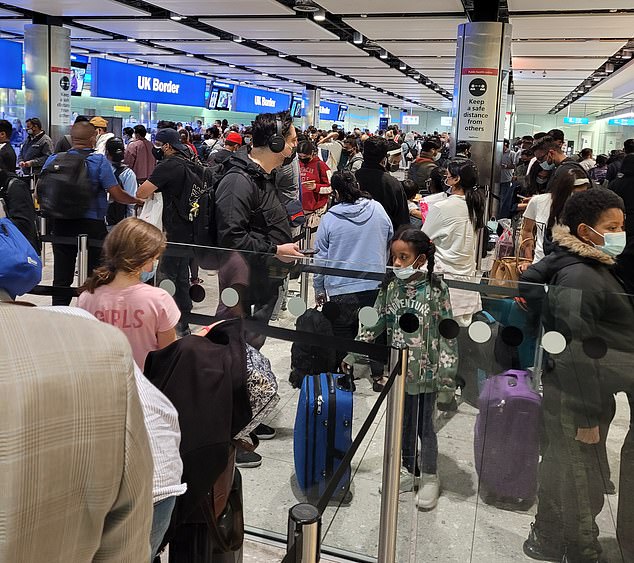 Passengers flying into the UK today faced ‘bedlam’ at the borders with some facing a three hour wait. Pictured: One arrival sent this picture in of the queues at Heathrow today 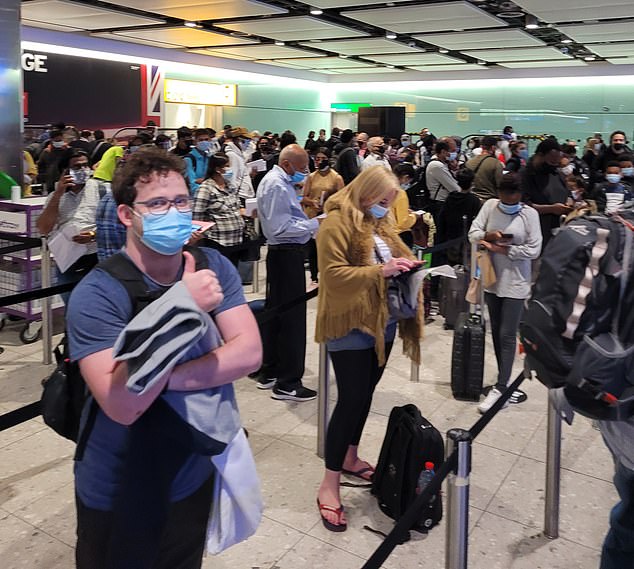 Heathrow travelers have told MailOnline how they were ‘terrified of catching Covid’ while being crammed into the airport’s border hall this morning. Pictured: Passengers queue at the Heathrow border hall today

‘While queuing there was no social distancing we had an plane from India arrive straight after ours and we queued for over three hours and when their plane arrived it was out the door.’

New York-based journalist Steve Myall was one of those caught up in the Heathrow arrivals chaos this morning.

The reporter, who flew in from ‘amber listed’ America, documented his experience on Twitter – saying in one post how he had been forced to sit next to a family from a red list country.

He said: ‘Have arrived in Heathrow. Been told to join the one hour plus queue and also that the fast tracking of families with young children is on hold.

‘Asked to go and sit somewhere while one parent queues up we’ve been directed to sit with a family who have just arrived from a Red List country.’

He later claimed that just 10 of the 35 Border Force desks were being staffed when he went through around 6am today. 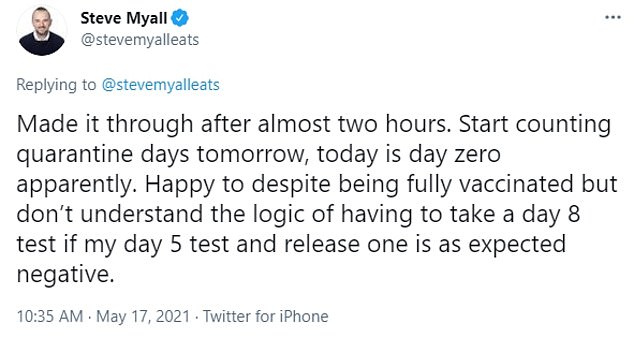 British tourists were handed face masks, sanitiser and asked to provide full details about their stay in Portugal as they touched down in the country for the start of long-awaited sunshine breaks.

All Brits arriving the country were also warned by officials at Faro airport of the strict rules for wearing face masks in public places, which includes keeping them on while on the beach or they could be hit with hefty £100 fines.

Passengers arriving were asked by immigration officials to produce proof of a negative PCR test and show that they had completed a locator form, with details of where they are staying before being allowed to proceed to the baggage hall.

It comes as the Portuguese tourism minister announced at the weekend that ‘everything is open’ for British tourists when borders open.

Restaurants, coffee shops and bars have been opened up in time for an expected influx of holidaymakers next week, Rita Marques revealed.

She told the BBC : ‘We have been working hard to tackle the pandemic, as I said, so restaurants and coffee shops and shops and everything is open as from May 1.’

Amongst the first Brits to arrive in Faro today was honeymoon couple Siddhant Majithia, 26, and his wife Hemisha, 24.

The young couple only married two weeks ago and admitted that they were not looking forward to the prospect of honeymooning in Britain and were relieved when the Government placed Portugal on the green list.

Siddhant, an optician from Leicester revealed that they only booked their Portugal honey last Thursday. He said: ‘It’s great to get away and we’re very lucky to have got on this plane. We had to cancel three other honeymoons before this one because of the travel restrictions.

‘It was very frustrating and getting us down because the thought of a honeymoon in England with unpredictable wedding wasn’t very exciting.’

Hemisha, a physiotherapist added: ‘We were thinking of doing a road trip to the Lake District, which isn’t exactly a memorable honeymoon given the unpredictable British weather.

‘Now we’ve got the chance for a great break in the sun and I’m really looking forward to it.’

Romina Depino, 28 and her sister Teresa, 43, said that Portugal was their first break in over a year.

Teresa, from Surrey said: ‘It feels great to be here. The sun is shining, it’s warm and I just want to lie by the pool and chill. I’m a care worker for elderly people and it’s been a really difficult year and I really need this holiday.

‘We were meant to be going to Turkey but then it was placed on the red list, so we’ve ended up in Portugal, which isn’t bad really.’

Onel Hernandez, 28 arrived in Faro with his fiancé Kirsha, 27, her sister Hazel, 18, and their daughter Dreamy, two.

The family revealed that they were staying for two weeks and had been saving up all year for the break.

Onel, who lives in Norwich said: ‘It’s great to be back on holiday and something we’ve really missed. The one good thing about the lockdown is that it gave me a chance to save some money for a decent family holiday.

‘We only booked the holiday two weeks, and it was quite expensive because there is a lot of demand for Portugal. But it’s worth it because given what the whole world has gone through over the past year, we all need a holiday.’

Mr Myall later said: ‘Made it through after almost two hours.’

He added that he and his family had chosen to arrive in the UK today as he had not seen family members since August and that it was the first day when households were allowed to mix.

Because he is arriving from an amber list country he will have to quarantine for at least 10 days, with two tests needed.

MailOnline has contacted the Home Office, who run the UK Border at Heathrow, for a comment.

Heathrow, who are not responsible for staffing, said in response to Mr Myall’s tweet that the delay was down to delays in checking Covid entry requirements for passengers.

‘We have raised your concern with our colleagues at Border Force whose responsibility it is to ensure that passengers within the red listed queue remain separate from other passengers.’

It comes as the UK’s border rules were branded a ‘joke’ today as Brits ignored Matt Hancock’s pleas to board hundreds of flights bound for ‘amber list’ countries.

Passengers have been taking advantage of at least 340 flights from Heathrow and Gatwick that MailOnline has identified to destinations in the medium-risk category.

They included nine flights to Rome, 21 to Paris and 26 to New York – on what is expected to be one of the busiest days of the year for British airports.

Brits catching flights at Gatwick admitted the Health Secretary’s entreaties only to visit a small set of of ‘green’ rated destinations had not swayed them – and nor had the requirement to isolate at home for 10 days on return.

In another confusing signal, the government has dropped the threat of £5,000 fines for non-essential travel.

Former No10 chief Dominic Cummings complained that the policies were not tough enough to protect public health and the economy this afternoon, while British Airways chief Sean Doyle said the rules on when people are permitted to visit amber countries are ‘not clear’.

Nathan Priestly, 31, from Wokingham in Berkshire, said he was heading to Corfu with five friends. Asked if he minded having to quarantine after returning to England from the Greek island, he said: ‘For me, I work from home at the moment so it’s neither here nor there. I’m still fairly young and fairly active. I haven’t had anything wrong with me, nothing underlying, so for me, a negative test and away you go.’

Other tourists were seen landing in the Algarve in southern Portugal, a green list country, and smiling for the cameras as they stepped into Mediterranean sunshine for the first time since the end of last year.

However, Ryanair passengers flying to Portugal from Birmingham were told to wear their masks or face spending the start of their holiday in a police station.

According to LBC, the pilot threatened: ‘This isn’t a kindergarten, this is a two hour flight. If you can’t wear your masks you will be starting your holiday in Portugal in a police station.’

Just 12 countries including Portugal, Gibraltar and Israel are green list countries on the UK traffic light scheme, meaning British holidaymakers are allowed to travel there without quarantining on their return to Britain.

However, they are required to take a covid test on or before day two of their arriving back in the UK.

The Government has said that people travelling to amber list countries such as France, Spain, Italy, Germany, the US and Canada must quarantine at home and take two tests upon returning.

All travellers to green, amber and red list destinations must also follow the entry requirements of the countries they are heading to. This means while Britons can fly to countries like Portugal, Greece and Italy with proof of negative test, they can only enter countries like Spain if they are citizens and legal residents of the EU, Schengen states, Andorra, Monaco, The Vatican, and San Marino, or can demonstrate essential need to enter.

Under the UK’s traffic light scheme, people travelling to red list countries such as India and Pakistan are required to quarantine in a hotel for 10 days at a cost of £1,750 upon returning in Britain. Again, government guidance says they will need to follow the local entry requirements and restrictions.

British holidaymakers returning to the UK from amber and red list countries have to complete a passenger locator form providing the results of their covid tests and where they will be quarantining for 10 days.