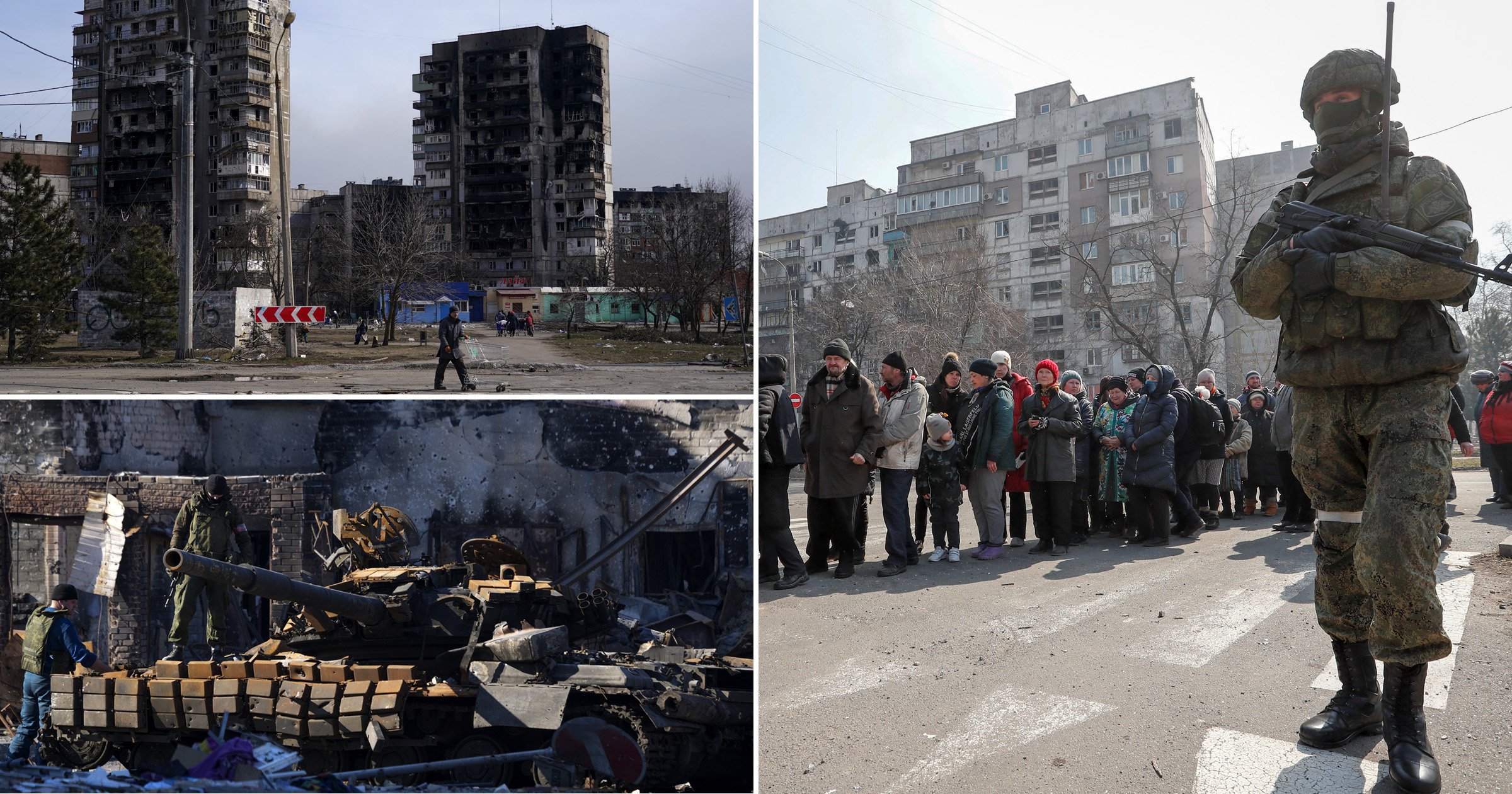 Ukraine claims thousands of civilians have been taken from the shattered port city of Mariupol to Russia so they can be used as ‘hostages’ to force it to give up.

Ukraine’s Foreign Ministry said that Putin’s troops have taken 6,000 residents to camps in remote parts of Russia against their will.

The ministry also said Moscow has confiscated identity documents from 15,000 people in a section of the port city under its control.

The chilling allegation comes after the UN confirmed Ukrainians are being arbitrarily detained and kidnapped in Russian-controlled areas.

The organisation has verified 36 cases of civilians being abducted, with families often denied information about the fate of those captured.

Ukrainian military intelligence said civilians in Mariupol are being sent through a camp in Russian-controlled territory, then onward through southern regions of Russia to economically depressed parts of the country.

Some could be sent as far as the Pacific Ocean island of Sakhalin and are being offered jobs on the condition they do not leave for two years, it is alleged.

Foreign ministry spokesman, Oleg Nikolenko, who made the claims on Thursday called for Russia’s ‘barbarity’ to end.

Writing on social media, Mr Nikolenko said: ‘By forcibly deporting Mariupol citizens to its territory, Russia moves to the next level of terror.

‘6,000 Ukrainians already now in Russian camps where they may be used as hostages. Humanitarian convoys fleeing to non-occupied parts of Ukraine still being shelled.’

Russia has said it is evacuating thousands of civilians of their own free will.

But Mariupol City Council claims that in total, about 15,000 residents have been subjected to illegal deportation since the invasion began.

‘Residents of the Left Bank district are beginning to be deported en masse to Russia,’ a statement on Telegram said on Thursday.

Authorities have also claimed that some citizens sent to ‘distant parts of Russia’ are being forced to work without payment, sparking comparisons with the conduct of the Nazis during World War Two.

Ukrainian MP Inna Sovsun said on Sunday that, according to information being shared by the city’s authorities, her countrymen and women were effectively being forced into slave labour.

She told Times Radio: ‘The very logic of Russia right now is the logic of the Soviet Union and the logic of Nazi Germany.’

Meanwhile, 100,000 residents are still stranded in desperate conditions with no food supply, water, power or medicine amid indiscriminate Russian shelling.

Ukraine said its attempts to evacuate citizens have been repeatedly blocked by Russian forces who were said to have stopped 40 buses reaching those in need last night.

Mariupol has become the most heavily bombed and damaged city during the month-long war, having suffered the brunt of sustained attacks.

It is considered a key strategic target for Putin because it would create a land corridor between Crimea-  which Russia annexed by force in 2014 — and areas of eastern Ukraine held by Moscow-backed separatists.

One Ukrainian man who managed to escape has described life in the city as ‘real hell’ after he witnessed blood and body parts covering its streets and Russian bombs destroying his neighbourhood.

Victor Mayevsky, 62, who is now safe in Poland , said: ‘All these days the shelling did not stop, sometimes there were breaks from 23.00 to 04.00 (and) during this period of time we tried to sleep, but sleep did not come easily.

‘The night was moonless, there was no street lighting, but the sky was red due to the burning boathouse… it was real hell.’

Victor said he escaped with his family after weeks of ‘constant’ shelling, freezing temperatures and severe food and water shortages.

‘Every day it became more and more difficult: the food was running out, and humanitarian aid could not reach our city due to the constant shelling of the green corridor,’ he said.

‘It seems that the Russian occupiers wanted to increase the death rate among civilians in Mariupol… it is terrible to realise that all these terrible things are happening in the 21st century, in Europe, in a country with 42 million citizens, in a city with a population of 500,000 people.’

Elsewhere, Ukrainians have described living in fear of an escalating campaign of kidnappings and intimidation in areas captured by Russia.

The UN has said it has evidence of civilians being abducted in towns where Putin’s troops are struggling to assert control.

One of those was journalist Viktoriia Roshchyna, who was working in occupied areas in the east of the country when she was taken by unidentified men on March 15.

Our journalist Victoria Roshchyna was released from Russian captivity. Now she is on her way to her hometown, Zaporizhzhia. She was captured on March 15 in the occupied Berdyansk pic.twitter.com/cwSt0A38sx

In Melitopol aged father of journalist Svetlana Zalizetska was taken hostage by probably FSB people. They say they will release him only if Svetlana gives herself up. She is not in Melitopol anymore. pic.twitter.com/9MDLdKTial

Her employer, Hromadske media, said she ‘was probably detained by the FSB’, Russia’s internal intelligence service, based on witness accounts of her being taken in the city of Berdyansk.

Svetlana Zalizetskaya, a journalist in the occupied city of Melitopol, accused Russian forces of taking her 75-year old father hostage and holding him in a basement as punishment for her refusal to co-operate.

A spokesperson for the UN told the BBC that those being targeted ‘are mostly representatives of local communities, journalists and people who were vocal about their pro-Ukrainian positions’.

However, they said they were not able to assess whether those being detained form part of ‘targeted lists reportedly drawn up by Russian security officials’.

The head of the Ukrainian NUJ, Sergiy Tomilenko, said the abductions were part of ‘a wave of information cleansing’ which is aimed at intimidating people into silence.