Home » World News » One eel of a story: the slippery truth of a fishy underground migration

In the winter of 2018, University of Melbourne students on assignment outside the institution’s Redmond Barry building peered into the courtyard pond at something stirring in the reeds.

A “long, brown, slippery thing”, one of them messaged their teacher, landscape architect Mark Gillingham, who had earlier dispatched the students to study the pond’s environmental design.

The message came with a photo because a German student, brave or naive, plunged her arm into the water and briefly caught hold of the mystery creature before it squirmed away. 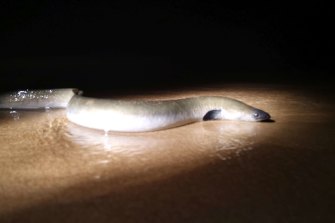 “I knew immediately it was an eel,” Mr Gillingham said. Most likely a short-finned eel, common in southern Victoria’s fresh and salt water. But it “defied logic” to be lurching in a body of water barely larger than a backyard children’s pool and, seemingly, isolated from any watercourse by which a wayward eel could stray.

“What was a decent-sized eel doing in that pond?” he asked.

The question led Mr Gillingham down an eel hole of research and discovery from which he admits he may never emerge – but he is in good company.

Swedish writer Patrik Svensson documents in Gospel of the Eels literally thousands of years of confusion, wonder and guesswork at the species’ origin story beginning with Greek philosopher Aristotle, who concluded there was no other explanation for an eel than spontaneous generation from mud. How else to explain why dry and isolated ponds miraculously refill with eels the moment water returns?

Taking a more scientific approach to how this eel came to live on-campus, Mr Gillingham turned to old topographical maps and Aboriginal knowledge. He learned billabongs and freshwater streams used by migrating eels once existed at what became Melbourne University. The old stream flowed toward the Yarra River via what we now know as Bouverie Street, in Carlton, and Elizabeth Street in the CBD, which became a notorious bog in early Melbourne.

The streams were moved underground long ago and contained in stormwater drains, but the water still flows.

Was the Redmond Barry eel released into the pond by an anonymous prankster, or had it instinctively travelled ancestral routes before popping out of a drain during rain and slithering overland to its new home?

Indeed, could thousands of Melburnians shopping and working on Elizabeth Street each day be unwittingly treading just metres above mass eel migrations through ancient streams?

“Whether there’s any eels still doing it, I don’t know, but it would be amazing just to put that question out there,” says Judith Alcorn, Melbourne University’s former biodiversity co-ordinator.

She believes the theory of eels travelling the storm drains began in the mid-20th century as a means to explain a peculiar phenomenon on university grounds.

“The classic story from grounds-keepers is that when the vice-chancellor used to live on campus there was a tennis court out the back,” Ms Alcorn says. “When it was awash with water during storms, and during the right season, it would sometimes have eels moving across it. People have seen them.”

Before retiring in March last year, Ms Alcorn was canvassing colleagues about testing the drains for traces of eel DNA.

She hopes an enterprising PhD student may one day pick up the question and provide a definitive answer.

While Aristotle would have us believe eels spontaneously grow from mud, our knowledge of the fish, and yes it is a fish, has come far enough to know they do, in fact, hatch from eggs.

In the case of Victoria’s short-finned eel, that hatching location is believed to be somewhere in the Coral Sea between Australia and island chains like Vanuatu.

But there is still so much elementary knowledge missing, says Wayne Koster, senior scientist with the Department of Environment, Land, Water and Planning. 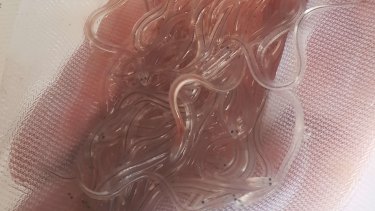 This includes the precise location of the breeding grounds, if one exists at all, and even how the eggs are fertilised.

“It’s a possibility that it’s in big schools or aggregations, but no one’s ever observed spawning of eels in the wild,” he says. “That’s not only in Australia, but globally.”

The life-cycle of the eel is complex and involves multiple rounds of internal and external upheaval.

We know that hatched larvae, a couple of centimetres in length drift south on ocean currents. Somewhere along the journey, they morph into larger glass eels and then into pigmented form, called elvers, as they approach the fresh water of Victoria’s coast.

An eel will remain inland for “many years” until maturity and then, one autumn day, having had enough of Victoria’s rivers and ponds, it will return to the ocean to begin its voyage thousands of kilometres to the Coral Sea.

Indigenous architect Jefa Greenaway is collaborating with Aboriginal elders and Mr Gillingham to weave the story of the eels, Wurundjeri knowledge, and the old creek system into a new multimillion-dollar on-campus student precinct.

It will include an “eel pond” in a parcel of land where the Bouverie Street creek once flowed freely. 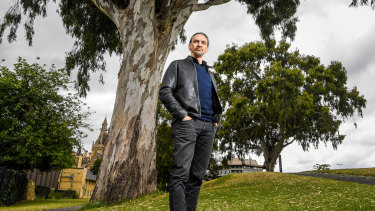 Indigenous architect Jefa Greenaway by the ancient river red gums at the University of Melbourne. Before European contact, it was a place of streams and billabongs. Credit:Justin McManus

If eels are moving about the stormwater system, it is hoped the pond will attract them to the surface. Mr Greenaway says there have been “conversations” about building a passage and pump from the drains to the new iteration of the Bouverie Street creek.

“There’s always these snippets and anecdotes about the eels: Someone knows somebody who saw something,” he says.

“The beauty is, [the eel migration and water courses] have been validated through the oral history and conversations directly with the Kulin Nation elders and traditional owner groups.

“What we haven’t been able to ascertain is if these eels can travel further north into some of the tributaries of the Yarra like Darebin Creek, Moonee Ponds Creek or Maribyrnong Creek.”

Wurundjeri elder Dave Wandin reckons eels moving through Melbourne drains is an urban legend, but he’s not about to rule it out completely.

“I’ve heard the stories, how we’ve dug tunnels and people come into work in the morning and there’s an eel slithering around,” he says.

“I personally haven’t seen them, but I don’t have the opportunity to go down into the tunnels where the maintenance workers might be seeing the eels. 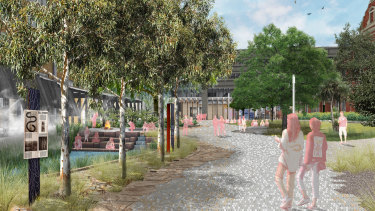 An artist’s impression of the entrance to the University of Melbourne’s new student precinct. The “eel pond” is on the left and where the Bouverie Street creek once flowed. Credit:GLAS landscape architecture/Mark Gillingham

“But the story remains the same: they are migratory and they will, to their best of their ability, follow the path that is available to them, remembering Melbourne University was a built on a swamp, as was most of Melbourne.”

Whatever the truth about modern-day eel migration, they have formed an important part of Aboriginal life for millennia as both a source of food and for bringing family groups and tribes together for ceremony and harvests, Uncle Dave says.

He says a pre-contact Wurundjeri eel trap, a small version of Victoria’s heritage-listed Budj Bim Cultural Landscape, was rediscovered in the Yarra River in the late 2000s.

“I’m not allowed to tell you [where],” he says. “The reason why is it’s still there is that nobody knows it’s there.”

Uncle Dave still catches eels and prepares them his favourite way – fried in flour and butter. His family and ancestors would also smoke them by hanging them in the hollow of a tree and burning leaves in the base.

It was his father who taught him where and how to find eels, including those in the dry lakes and ponds that so confounded Aristotle.

“They drill themselves down in the mud. Dad would go out with a shovel and dig the buggers out,” he says.