The state government and NSW Health are considering stricter COVID-19 testing protocols for returned travellers and airline crew in a bid to keep the state safe.

NSW Health Minister Brad Hazzard told The Sydney Morning Herald that he and senior NSW Health officials have begun discussions with representatives from international airlines. "We're exploring whether airlines are able to test passengers and airline staff before they board an international flight as well as whether it's viable to then test them again upon arrival in Australia," he said. 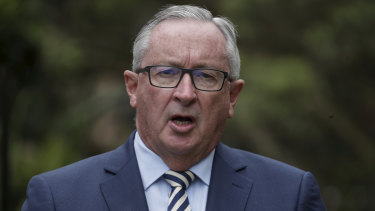 "We need international freight and passenger flights to continue to come to NSW. We all know the challenges we face, the question is how to make it safer."

On Sunday, NSW reported no locally acquired cases of COVID-19 for the 11th consecutive day since a housekeeper employed by the Ibis and Novotel hotels tested positive on December 2. Monday will mark 14 days since she last used public transport, on which she wore a mask.

A spokesperson for NSW Health said investigations into the source of the infection are ongoing and close contacts of the hotel worker continued to be tested. So far, “no further positive results have been identified”.

Three cases of COVID-19 were reported in returned travellers on Sunday, bringing the total number of cases in NSW to 4453 since the pandemic began.

Mr Hazzard said COVID-19 testing standards varied from country to country and that discussions about pre-flight testing have only just begun.

"We might have to look at determining the most high-risk countries and which countries have tests we can rely on by developing a system that recognises the relative risk on a number of criteria," he said.

"Whatever we come up with in NSW by working with international airlines, we then need to see if it can be adopted in other states and territories so there's consistency across Australia."

Mr Hazzard is concerned the NSW community has become too relaxed about social distancing. "Until there is a vaccine we can't run the risk of complacency, we still need people to be on high alert and get tested," he said. "We're seeing fairly low numbers for testing. This is inconsistent with the time of year given we're in the middle of the hayfever season."

In the past week, NSW has had no cases of community transmission and 34 cases of COVID-19 in hotel quarantine.

"Thirty-four is a big number but almost half those cases are people wanting to get to other states, we're looking after them because they flew here," Mr Hazzard said. "That shows the value not only of hotel quarantine but NSW's role in the program. We're pulling our weight big time for the rest of Australia."

NSW takes 3000 returned overseas travellers a week into its hotel quarantine program, 45 per cent of whom are residents of other states.

"We have a high level of concern to get this system as safe as it can be because we have so many more people flying in than every other state," Mr Hazzard said.