Home » World News » Now schools are closed, be a craft wizard and make your own Hogwarts

Now schools are closed, be a craft wizard and make your own Hogwarts (with six toilet roll tubes, if you can find any!)

We have pulled up the drawbridge and are preparing for battle, enemy lines detected from imposing turrets.

But given two of our favourite cuddly toys are on the lookout, we doubt any foe would dare to advance.

With schools closed, imagination is now imperative to keep kids and parents sane. Which is why I’m building a Hogwarts-style castle with my children, Rosie, nine, and Felix, seven.

However, my craft skills are a little rusty. Luckily, there are myriad websites and YouTube videos explaining how to build cardboard castles.

For instructions to build a toy castle I use the craft website A Beautiful Mess (abeautifulmess.com), but for older kids you can find inspiration on a crafting YouTube channel called Show Maker.

Design finalised, I rope in Rosie and Felix to help. Without blowing my own bugle, I think we do well. And if I can build a castle that entertains little minds for longer than it takes me to sip a glass of sauvignon blanc, anyone can. 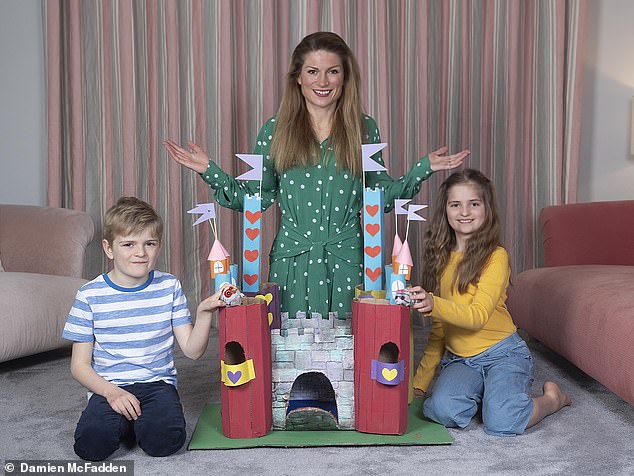 With schools closed, imagination is now imperative to keep kids and parents sane. Which is why I’m building a Hogwarts-style castle with my children, Rosie, nine, and Felix, seven

STEP ONE Flatten one of your boxes and cut out one of the biggest sides. This will serve as the base of your castle. Ours is 30in by 23in. Paint it — we choose green — and leave to dry.

Take a second box and draw a line 3 in inwards from one corner, running parallel to the corner.

Do the same on the other corner, and cut down each line, so you have effectively cut the corner out of your box. Repeat on the three other corners. 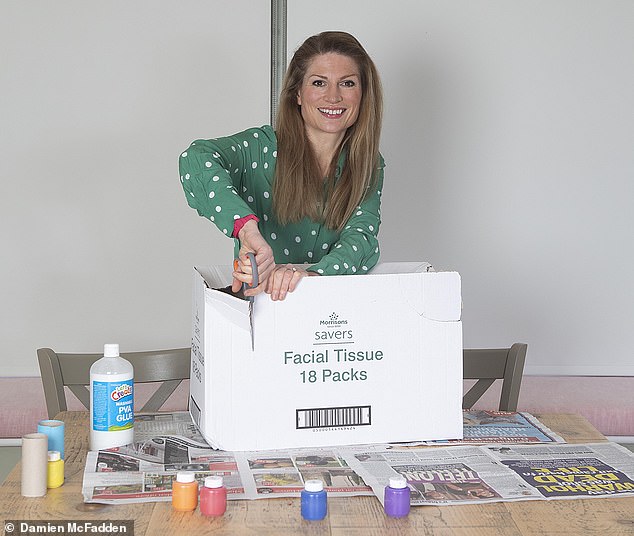 Luckily, there are myriad websites and YouTube videos explaining how to build cardboard castles

STEP TWO Use your third box to cut three oblong sized pieces of card, from which to make your three biggest turrets. They should be taller in width than the height of the box you’ve cut the corners out of. My oblongs are 20in by 16in.

Use the left­over cardboard from the first box to cut out another same sized oblong for your fourth turret. With a craft cutter, scour vertical lines, 1 cm apart, along the length of one of your oblong pieces of card.

This should make the card malleable enough to roll it lengthways into a large cylinder. Tape the ends together with masking tape, and repeat with the three other oblong cards. You should now have four large turrets. Mine are 16in tall.

Don’t despair if you have nobody to play board games with. You can play all these games online:

You can choose to play a friend — they get sent an invitation to join the game — or a stranger. Click start for an empty scrabble board. Drag and drop the tiles on the board to create your words.

Just click to start a game and choose to play against a random opponent, a friend (you can invite them to join) or against a coaching computer and get analysis feedback after your game.

The website gives you the option to ‘get started with bridge’ (beginner information), ‘play my first deal’ (player instructions), or ‘challenge a player’ (finds you an opponent, or searches through your existing online ‘friends’).

STEP THREE With your hot glue gun, squirt glue down each cut side of card you cut in Step Two. Working one corner at a time, quickly attach one turret in between each piece of glued card — so the turrets stand in the place where the corners were, half inside the cut out corners, so they’re supported.

STEP FOUR Print five sheets of A4 pattern of a medieval stone wall online — I use 14textures.com. If you don’t have a printer, then paint the card yourself. Using PVA glue, stick the sheets of the pattern to the flat outside walls of your castle.

Get your children to paint the four turrets — mine choose red at the front and purple and yellow at the rear. Leave to dry.

Cut the other two toilet roll tubes in half, to make four smaller tubes, and repeat the steps covering them in contrasting paper — I use blue and orange.

Make two slits 90 degrees apart at the bottom of the smaller tubes and attach one to the top of each larger tube.

Cut four strips of a different coloured card to make roofs for your toilet roll turrets. I use pink. Roll each strip into a cone and secure with glue, then cut off the bottom of the cone so it is level. Use your glue gun to stick one cone on top of each toilet roll turret.

STEP SIX Your large turrets and stone walls should now be dry.

Use scissors to crenellate the top of your stone patterned walls and use your craft cutter to scour out a large arched opening on the front wall (leave the bottom attached so it can open and close).

Then glue on two small lengths of wool so it falls halfway down. Cut two arches out of the two large turrets for windows. Glue a strip of card across the bottom to make a balcony. 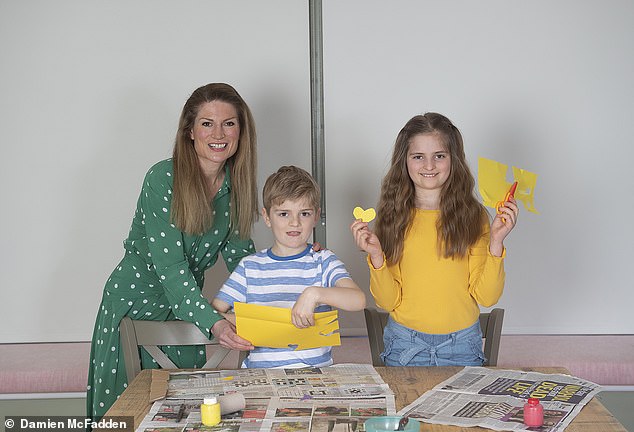 STEP SEVEN For your final two turrets, cover the largest tubes in coloured paper. Crenellate the top of each with scissors.

Cut two slits 90 degrees apart at the bottom of each toilet roll turret, and slide one onto the top of each turret.

Cut two slits at the bottom of each larger tube turret and push one down at the back of each of the two main turrets at the rear.

STEP EIGHT Make six flags by cutting each kebab stick in half, and glue on a triangle of card.

Cut eight arches out of white card for two windows on each of the four toilet roll tube turrets, and make frames by drawing on black crosses. Lift your finished castle onto the painted green base — and voila!

The new ways to keep in touch

Staying home needn’t be quite as isolating as it sounds. It’s never been easier to stay in face-to-face contact via video call. It’s easy and free to set up and there are options for laptops, smartphones or tablets…

Available to download on smartphones, tablets, PCs and laptops, WhatsApp enables group text chats, video calls and audio calls — all completely free. Search for WhatsApp Messenger in the app store. The app will text you an access code. Enter it, then type in your name and, when prompted, add contacts.

If you don’t have a smartphone this will work directly from a laptop. You’ll need to create a Facebook account (go to facebook.com and follow instructions). To place a call, open Facebook Messenger on your PC or phone, and you’ll see your contact list. Tap the phone or video camera icon to make a video or audio call.

This video call app works on smartphones, laptops and tablets and is free to use. After downloading Zoom, try starting a video chat by choosing ‘new meeting’, then invite contacts from your phone who have also downloaded Zoom.

Works easily across both PCs and smartphones. Download the app and enter your email address. Open the confirmation email, then tap ‘create a new workspace’ and choose a name such as ‘Family Chat’. You can then invite family members, via email, to chat.

If you own a smart speaker, you can place calls by command: ‘OK Google, call [person’s name]’. You’ll need a Google account and save your contacts there (go to google.co.uk to set up) and then download the Google Home app to connect to the speaker.