NHS hospitals could run out of oxygen within hours if hit by a wave of coronavirus patients, experts have warned as the UK’s crisis rapidly worsens.

Gas suppliers have been told to quadruple production to help hospitals prepare and military drivers may be requisitioned to do the deliveries.

The coronavirus can, in severe cases, lead to pneumonia and leave patients in need of life support machines which breathe for them – those need oxygen tanks to function.

The oxygen warning comes after Health Secretary Matt Hancock called on manufacturers around the UK to start making ventilation machines.

Thousands of people in Britain are expected to become so ill with the coronavirus that they will rely on these machines to keep them alive.

But hospitals don’t have enough of the vital pieces of equipment, which are used to get oxygen into the blood when the lungs don’t work, and people could die without them.

Mr Hancock also said that doctors from other specialties could be trained how to use ventilators to help cope with soaring numbers of patients.

Nearly 1,400 cases and 35 deaths have been officially recorded in Britain but thousands more may unknowingly already be carrying the virus, senior officials fear. 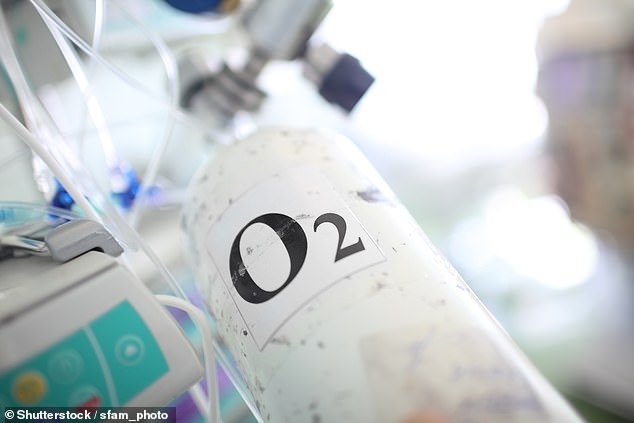 Hospitals could run out of oxygen in hours rather than days, experts have warned. The gas is vital for the life support machines which replace people’s lung function in deadly cases of coronavirus (stock image) 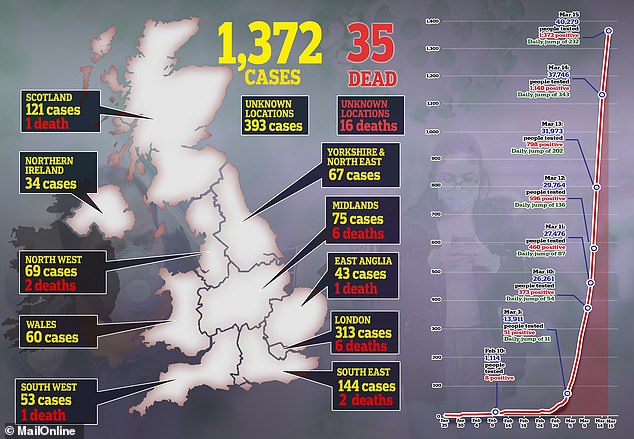 Almost 1,400 people have been officially confirmed to have the coronavirus in the UK – authorities are no longer testing all suspected cases and are focusing on hospital patients

Experts made the warning after an Association of Anaesthetists online conference at the weekend, which was watched by around 1,000 members, The Telegraph reports.

They said that, as well as oxygen, critical care units also face running out of sedatives, anaesthetic drugs and painkillers.

A hospital treating just 10 patients with the coronavirus would likely run out of the anaesthetics propofol and alfentanil in less than two weeks – alfentanil in just 24 hours and propoful within 11 days.

Painkiller fentanyl is also in short supply, they said, as are intensive care machines and isolation rooms.

A consultant at the Royal United Hospital in Bath said: ‘These are scary times.

‘We have yet to reach the point of acceleration in the UK and when that hits us that will be fairly horrific, the NHS will be overwhelmed.’

Dr Jay Suntharalingam, a lung specialist at a private hospital in the city, added: ‘There needs to be a greater heightened sense of urgency about this.

‘Oxygen supply is not something we’re used to thinking about. But there is no guarantee that won’t run out in a matter of hours rather than days.’

One doctor said worrying about equipment shortages was keeping him up at night.

Meanwhile, the government has issued a call to arms to non-healthcare manufacturers in the UK, such as JCB, Rolls Royce, Honda and Dyson, to ask them to step in and build vital ventilators for the NHS.

Mr Hancock said the health service currently has an estimated 5,000 of the machines but it will need ‘many times more than that’. 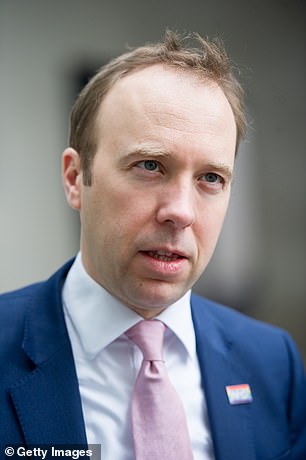 The Health Secretary promised the government will buy all those which are made, and that no amount would be too many.

The government’s attempts to make the NHS battle-ready will also include turning operating theatres which are usually used for routine knee and hip replacement operations into coronavirus wards because they have built-in oxygen supplies.

It is not clear whether engineering plans will be made freely available for companies to make ventilators to help out in what is now a national emergency.

They will also need to source the correct parts – potentially import them – and make sure machines go through the same rigorous quality checks as those made by the specialist manufacturers.

How these challenges will be overcome, and how quickly firms will be able to work through them, is not immediately clear.

One expert said it might not be as straightforward as the Government made out, with modern machines very complex and reliant on supply chains.

Professor David Delpy, of the Royal Academy of Engineering, said: ‘This proposal assumes that the NHS wants more of the latest spec ventilators with all the usual manufacturers’ guarantees and liability cover.

‘Since modern ventilators are usually electronically controlled with a variety of built-in sensors, there may be supply chain limitations on how rapidly one can ramp up production.

‘However, the previous generation of mechanical ventilators were relatively simpler, and components could be manufactured by many engineering companies with fairly standard machine tools.

‘These are certainly adequate for all but the most complex ventilation support cases, but I suspect there are currently no UK manufacturers of these (since there is no NHS market for them). They are still used by the military or in emergency situations since they need no electrical power, only a compressed air/gas supply.’ 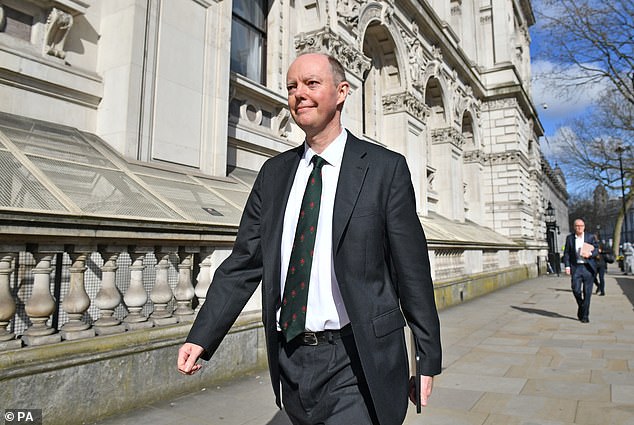 Chief medical officer for England, Professor Chris Whitty, is pictured walking along Whitehall ahead of one of the Government’s many crisis meetings

Healthcare data analysts, Edge Health, predicted in a model that the number of coronavirus patients needing ventilation could have hit 93,000 by May in a worst case scenario.

Mr Hancock said on Sky News yesterday: ‘We start with around 5,000 ventilators, we think we need many times more than that and we are saying if you produce a ventilator then we will buy it. No number is too high.

‘They are relatively complicated pieces of kit, I couldn’t make one, but they’re not so complicated that the advanced manufacturing that this country is so good at now can’t be able to turn its production lines over to.

‘We’ve been talking to a whole host of companies about it and the Prime Minister is hosting a conference call today with them to say very clearly to the nation’s manufacturers ventilators are the thing that we are going to need and frankly right across the world, the demand for them is incredibly high so it is not possible to produce too many.

‘So anybody who can should turn production and their engineering minds over to the production of ventilators.’

As well as a shortage of the machines, the NHS faces a possible shortage of people who know how to use them.

Speaking on the BBC’s Andrew Marr Show on Sunday, Mr Hancock said doctors would be drafted in from other areas of hospitals and taught how to operate the life-saving equipment.

He said: ‘We want to bring people who are recently retired back into service and for instance release doctors from some other duties and get them back into the health service, but also the clinical need that people have when they’re suffering from coronavirus are very specific.

‘It’s about ventilation, because it’s a respiratory disease.

‘So we will be stopping some other activity and asking doctors who normally do other things to retrain, to be able to, for instance, use the ventilator.’ 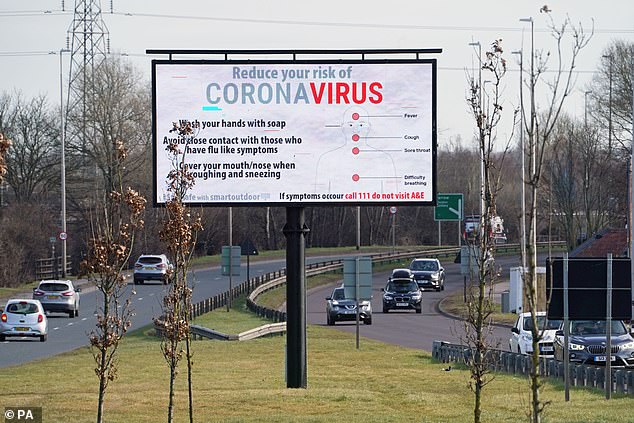 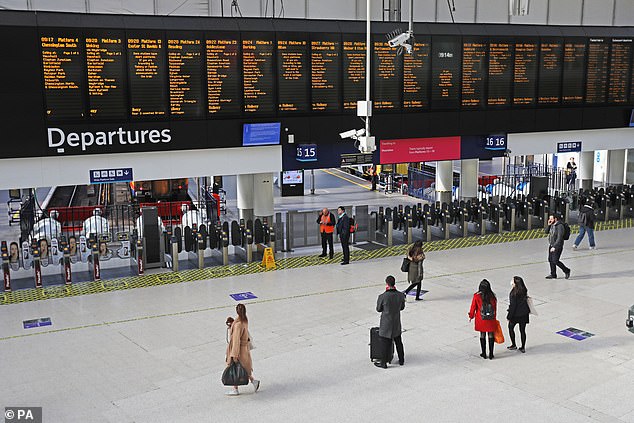 London Waterloo station, pictured on a Monday morning, looks deserted as many people work from home amid a worsening coronavirus crisis 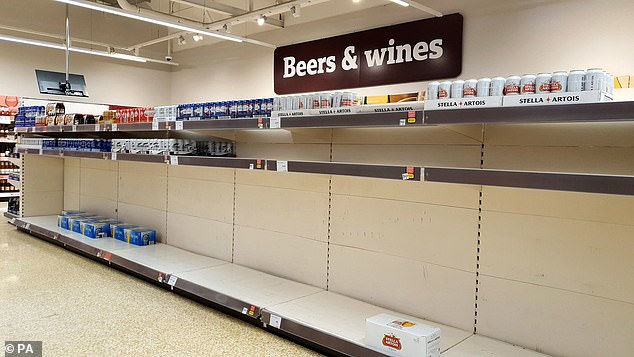 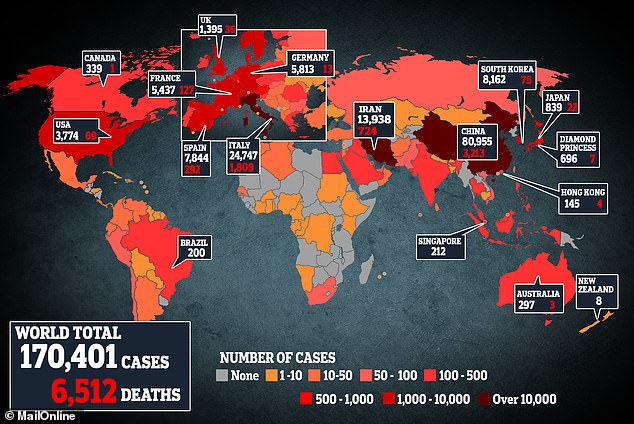 There have been more than 170,000 cases of the coronavirus worldwide and at least 6,512 people have died

A Rolls Royce spokesperson said: ‘We understand that the government is exploring ways in which businesses can help deal with the outbreak of COVID-19.

‘We are keen to do whatever we can to help the government and the country at this time and will look to provide any practical help we can.’

A spokesperson for Prime Minister Boris Johnson said he would phone major companies today to recruit them to help out.

The company that owns French designer brand, Louis Vuitton – LWMH – has said it will make hand gel in its factories to help with a national shortage in France.

The sanitisers will be given free of charge to hospitals in France, where there have been more than 5,000 confirmed cases of the coronavirus.

In a statement the company said: ‘LVMH will use the production lines of its perfume and cosmetic brands … to produce large quantities of hydroalcoholic gels from Monday.

‘These gels will be delivered free of charge to the health authorities.’

The sanitisers are based on the same ingredients as perfumes – pure alcohol and water.

France has also requisitioned all face masks being produced in the country so they can be given to hospitals and health workers instead of the public buying them.

Panic buying has made items like these hard to come buy in countries around the world.

Number 10 said: ‘He will stress the vital role of Britain’s manufacturers in preparing the country for a significant spread of coronavirus and call on them to step up and support the nationwide effort to fight the virus.’

Despite a drive to ramp up ventilator capacity, Health Secretary Mr Hancock refused to guarantee that everyone who needs a ventilator will have access to one.

And he said ‘we don’t make guarantees in healthcare’ but vowed to do ‘everything we possibly can to protect life’.

His comments came after the Government this weekend rushed to reassure people that it was not pursuing a policy of allowing the virus to spread to try and build up herd immunity.

Suggestions that officials were hoping 40million healthy people would catch the virus so they could stop it from spreading in the future sparked outrage last week.

A row blew up after chief scientific adviser Sir Patrick Vallance said public gatherings such as football matches were not being abandoned as quickly as those in other countries because it would be beneficial if a proportion of the population could be exposed to the new virus – and build up a ‘herd immunity’ to it – otherwise Britain would be vulnerable to future epidemics.

But Mr Hancock has since insisted the government’s overriding objective is to save lives amid the coronavirus outbreak.

‘We have a plan, based on the expertise of world-leading scientists,’ he wrote in the Telegraph. ‘Herd immunity is not a part of it.’

The Government is this week poised to ban mass gatherings, after sports events across the country were axed and summer festivals face uncertainty.

The move would bring Britain into line with other European countries, most recently France, Spain and Austria, which have banned large groups of people from forming.

Europe has now been declared the coronavirus centre of the world, by the World Health Organization, which admitted the situation is out of control on the continent.

There are now more cases of COVID-19 outside of China than within it and more than 57,000 of them have been confirmed in Europe.