A road worker in Nevada was wounded Wednesday and the suspected gunman was killed after a police chase and shootout on a remote stretch of highway, authorities said.

The incident unfolded around 10 a.m. when a passing motorist opened fire on a Nevada Department of Transportation (NDOT) maintenance worker who was resurfacing State Route 278 near Eureka, officials with NDOT and the Nevada Highway Patrol said in separate statements.

The worker was shot multiple times and airlifted to a hospital, where officials said he remains in stable condition. 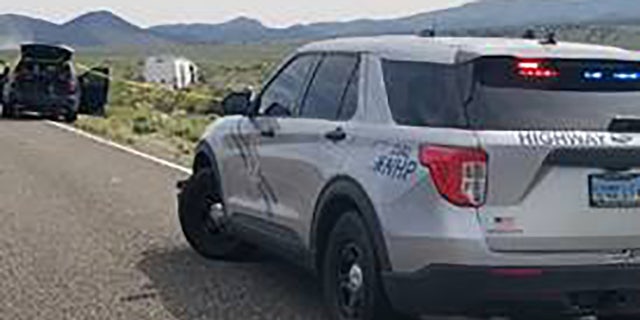 An NDOT maintenance worker was shot multiple times Wednesday morning by a passing motorist, who was later killed during a standoff with authorities.
(Nevada Department of Transportation)

Authorities chased after the suspect, who was driving a Ram cargo van, for about 25 miles, and were eventually able to disable it after deploying spike strips, FOX5 Vegas reported.

During an hours-long standoff, a gunfight broke out between officers and the suspect, who was later found near the van with a gunshot wound, officials said. The suspect died in an ambulance while en route to a hospital.

It was not immediately clear whether the gunshot wound was from officers or was self-inflicted.

“All of us at NDOT were heartbroken to learn about the tragic shooting of one of our valued team members,” said NDOT Director Kristina Swallow. “I want to wish our team member a speedy recovery, and I want to thank the law enforcement agencies and medical professionals for responding quickly to the scene and providing first aid.”

The highway remained closed Wednesday as authorities investigated the shooting.