Nearly 60% of female students say they have been sexually assaulted at university, survey reveals

Nearly 60 per cent of female students say they have been sexually assaulted at university, a shocking new survey has found.

Student news site The Tab asked 4,000 students about their experiences of sexual assault on campus for its 2021 Sexual Assault Survey.

It found widespread problems – with 59 per cent of female students who responded saying they’d been sexually assaulted at uni.

But just seven per cent of students reported their sexual assault to their uni, the figures show.

It found two thirds were unhappy with how their uni handled their case and half of were say they were told nothing about the outcome of their complaint.

It comes just weeks after reports of sexual harassment, abuse, misogyny and assault, published by the Everyone’s Invited website – an anti-rape movement recently set up in the UK – included the names of a host of elite universities. 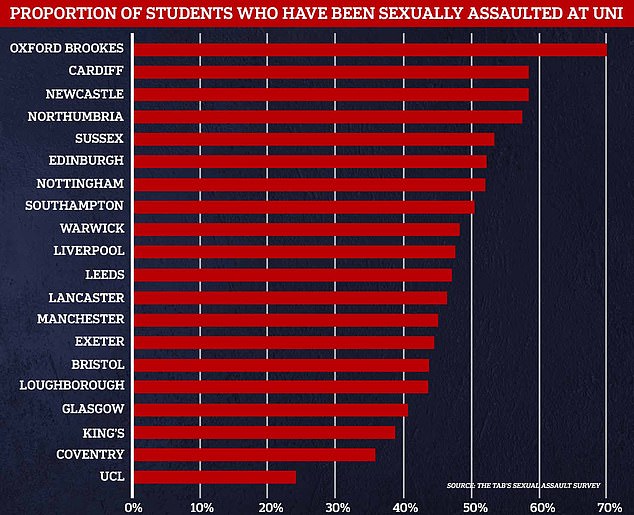 ‘I’m not aware of any universities that have put in place good, fair and functioning processes,’ Olivarius told The Tab.

‘When we sue universities, there is often an intellectual hubris. They don’t think they should be held accountable.’

She added: ‘They’re guilty, they’re embarrassed, and they’re not doing their jobs’.

There are stark differences between universities – 70 per cent of respondents from Oxford Brookes who filled out the survey said they’d been sexually assaulted during their time at uni.

Oxford Brookes told The Tab it was ‘extremely concerned’ to hear students had experienced sexual assault, and said it had no place at the university.

Students said the incident was most likely to have happened in a pub or club.

But for those who reported the incident, it was most likely to have happened in halls.

It comes after it emerged last month that Exeter University – where JK Rowling and Zara Tindall studied – tops the list of 108 universities where sex assault allegations have been made by people on the Everyone’s Invited website.

The forum, set up last year by former student Soma Sara for people to share their stories of sexual abuse and ‘rape culture’, has shaken Britain’s educational establishments.

Along with top schools, the UK’s most prestigious universities were named in the 1,000 plus testimonials and red-brick Exeter appeared most, coming up in 65 anonymous testimonials on the website. 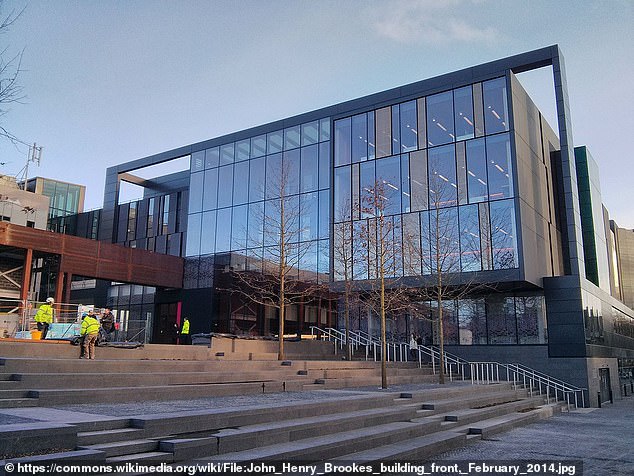 Everyone’s Invited’s founder Miss Sara, who set it up while living with her grandmother’s Paris home during lockdown after graduating from UCL, has said they were overwhelmed with new testimonials from universities.

The number of universities named emerged days after Education Secretary Gavin Williamson ordered a crackdown on student rape culture and called for universities to follow a new emergency code.

A University of Exeter spokesman told MailOnline at the time: ‘The safety, security and wellbeing of our students is, and always will be, our primary concern.

‘We have put in place a wide range of safety and support measures in recent years, improved our policies and reporting system and continue to work with students, colleagues and community partners to tackle misogyny and violence against women – this includes a special session of the Provost Commission in April on our collective role as a community and institution.’

‘We have made it clear to all members of our community that we have zero tolerance for sexual harassment, abuse or assault, and that criminal or disciplinary proceedings will be brought against those who commit these offences.

‘We will continue to support each other and work together to keep all members of our community safe and feeling safe. We encourage all students to report and get the support they need.’

The universities named in testimonies on Everyone’s Invited

The top ten spots for claims of sexual assault are:

The universities named in testimonials are:

* University of the West of England

* University of the Arts London