Nazanin Zaghari-Ratcliffe’s husband is planning to stage a protest outside the Iranian embassy with their six-year-old daughter as his wife faces new charges after five-year jail sentence.

Nazanin Zaghari-Ratcliffe, 42, has completed a sentence in the Islamic Republic over widely refuted allegations of plotting to overthrow its government. She strongly denies the charges.

The mother-of-one finished the latter part of her sentence under house arrest due to Covid-19 and had her ankle tag removed on Sunday. 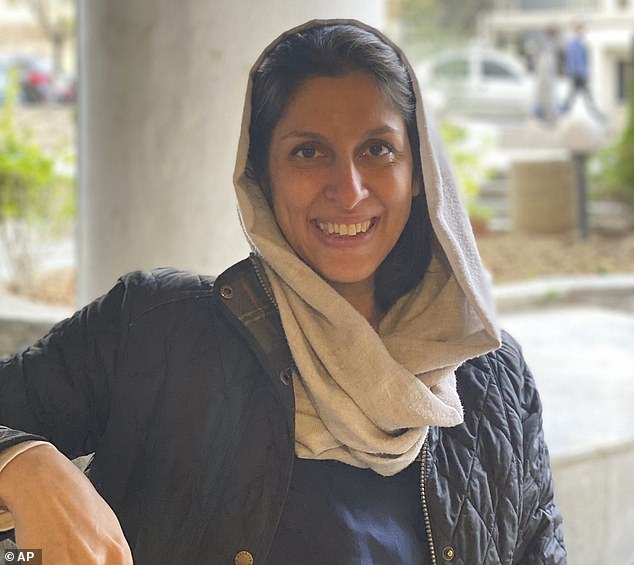 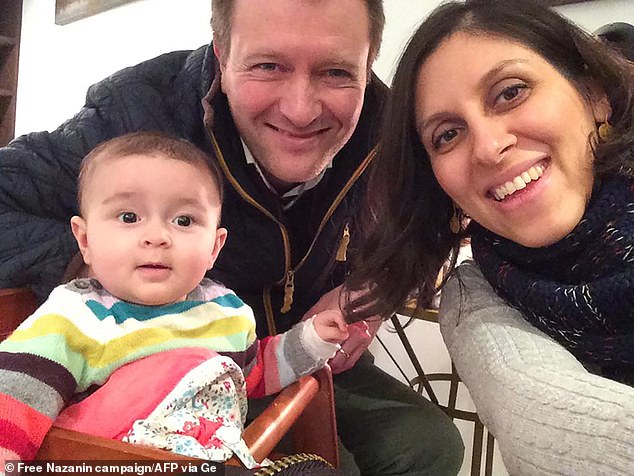 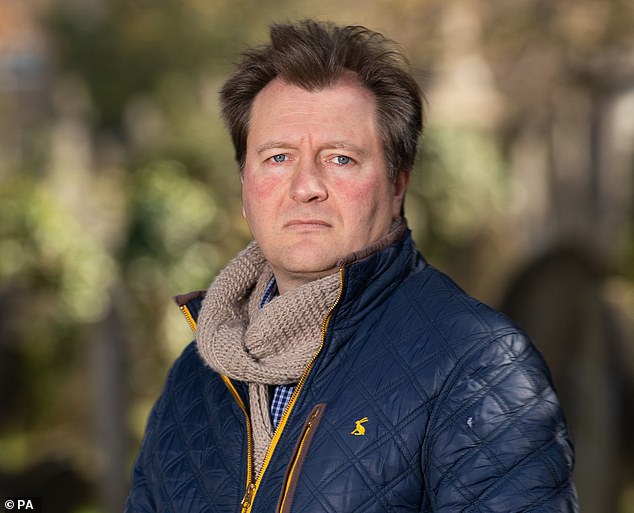 But she must still appear before an Iranian court in a week’s time to face new charges.

The Guardian reports the new allegations – long threatened by Iranian authorities – concern Mrs Zaghari-Ratcliffe’s involvement in propaganda activity against Iran, including attending a 2009 demonstration outside its embassy in London, and speaking to BBC Persian.

Her husband Richard Ratcliffe – who has long campaigned for her freedom – will demonstrate with the couple’s daughter Gabriella and his wife’s brother Mohamed outside the Iranian embassy in Knightsbridge from around midday on Monday.

He will deliver a 60,000-signature Amnesty International petition to the embassy calling for his wife’s immediate release.

Mr Ratcliffe called it a ‘watershed’ moment, saying: ‘If you’d asked me when we first started campaigning with Amnesty to bring Nazanin home that five years later we’d still be knocking on the door of the Iranian embassy, still waiting for them to ever open it and explain what’s going on, then I would have been horrified.’

He earlier said he was ‘grateful’ for the ‘strong words’ of Foreign Secretary Dominic Raab, who condemned the ‘cruel and intolerable’ treatment of Mrs Zaghari-Ratcliffe and called for her swift return to the UK. 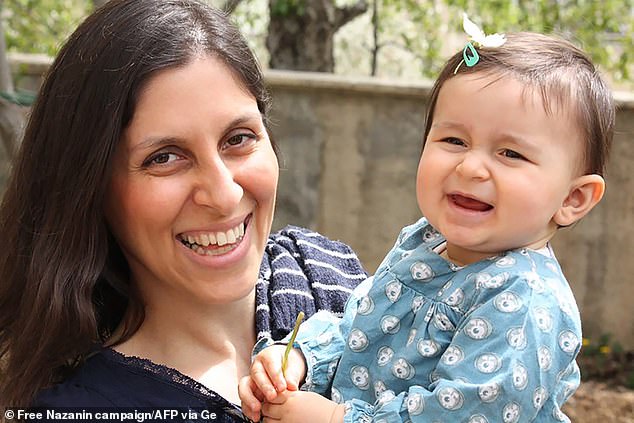 Nazanin Zaghari-Ratcliffe posing for a photograph with her daughter Gabriella 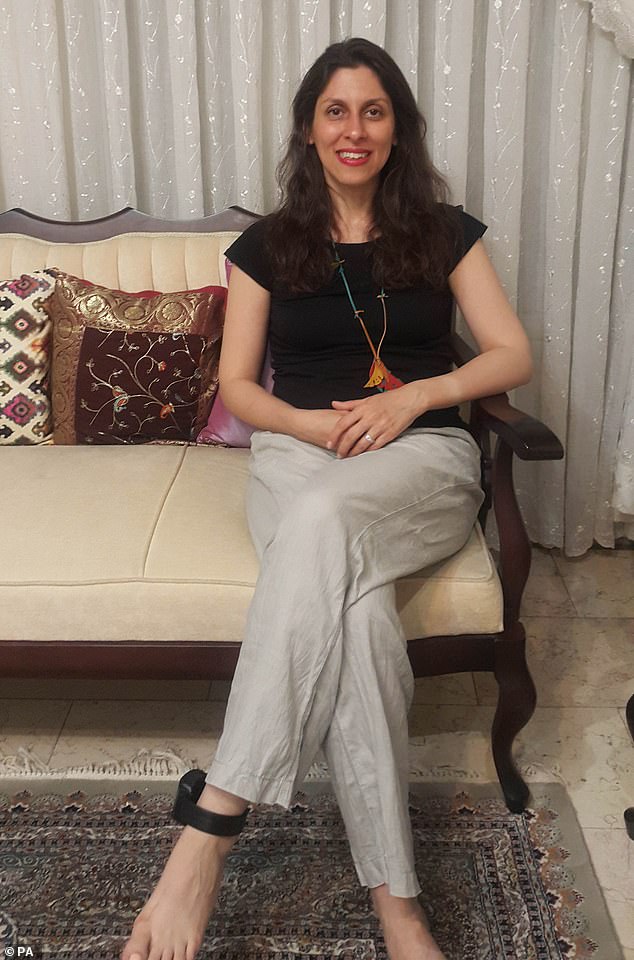 Zaghari-Ratcliffe (pictured wearing an ankle monitor) has been out of prison since last spring due to the coronavirus crisis, but has been held under house arrest at her parents’ house in Tehran

Mrs Zaghari-Ratcliffe, of north London, was arrested at Tehran’s Imam Khomeini Airport while taking Gabriella to see her parents in April 2016.

The charity worker, who was employed by the Thomson Reuters Foundation at the time of her arrest, strongly denies the charges and civil rights groups say she was jailed with no evidence and her trial was unfair.

The UK has been locked in a high-profile diplomatic tussle over Mrs Zaghari-Ratcliffe’s detention, which has seen her held in solitary confinement and undergo hunger strikes.

Rupert Skilbeck, director of the Redress legal campaigning group,said the ‘cumulative effect’ of her confinement over the past half decade ‘crosses that threshold into torture’ and warned of long-term psychological effects.

The UK Government has afforded her diplomatic protection, arguing she is innocent and that her treatment by Iran failed to meet obligations under international law. 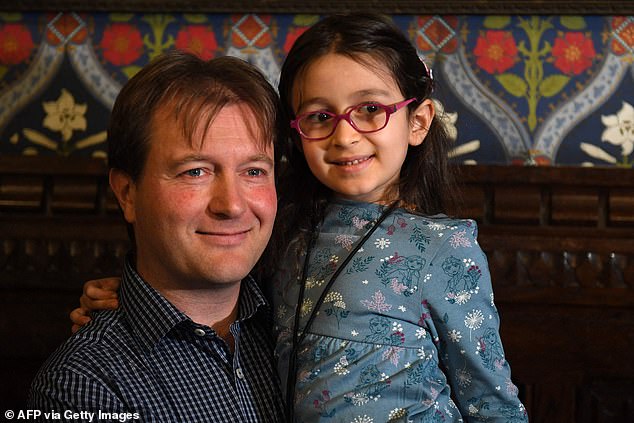 In this file photo taken on October 11, 2019 Richard Ratcliffe, husband of British-Iranian aid worker Nazanin Zaghari-Ratcliffe jailed in Tehran since 2016, holds his daughter Gabriella during a news conference in London

Mrs Zaghari-Ratcliffe has been used as a political pawn, according to Nobel Laureate and Iranian human rights lawyer Shirin Ebadi.

Commentators have linked a long-standing debt running into hundreds of millions of pounds as central to the case, which has been dubbed ‘hostage diplomacy’ by former foreign secretary Jeremy Hunt.

The UK is thought to owe Iran as much as £400 million over the non-delivery of tanks in 1979, with the shipment stopped because of the Islamic revolution.

Mrs Zaghari-Ratcliffe’s constituency MP Tulip Siddiq has connected the debt with the case.

She said last month: ‘My constituent’s life is basically a bargaining chip because she’s not being set free because we haven’t fulfilled our responsibility of paying the debt.

‘If there’s some movement on that I reckon Nazanin’s chances are increased.’

Hopes have been raised that Iran has entered the ‘endgame’ over Nazanin Zaghari-Ratcliffe’s ordeal.

Former Foreign Office permanent secretary Lord McDonald told BBC Radio 4’s Today programme: ‘We’re in the endgame, the Iranian system is behaving in a typical way, Nazanin has completed her sentence, something good yesterday happened with the removal of the ankle tag but the final moves have still to take place – this case has not yet ended.’

Her husband, Richard Ratcliffe, said: ‘I spoke last week to the Foreign Secretary who said, “Listen, I can’t promise you it’s going to be this weekend but it feels like we’re close”.

‘I’ve spoken to other former hostages and they say yes at the end it gets quite bumpy and this to them feels like the endgame. So fingers crossed it is but also we might have many more months to go.’

Lord McDonald added: ‘I hope she is (coming home soon) and yesterday was a very good day but as Richard has explained this is not over until Nazanin is back in the UK.’

April 3 2016: The mother-of-one is detained by the Iranian Revolutionary Guard at Imam Khomeini airport after a holiday visit to Iran where she showed her daughter Gabriella to her parents.

July 12 2016: Richard Ratcliffe, her husband, delivers letters to Downing Street for outgoing prime minister David Cameron and his replacement Theresa May on his wife’s 100th day in custody. He says it is ‘astonishing’ no British minister has publicly criticised Tehran for arresting Mrs Zaghari-Ratcliffe.

September 9 2016: Mr Ratcliffe says his wife has been jailed for five years following a conviction on unspecified ‘national security-related’ offences – a sentence he describes as ‘a punishment without a crime’.

November 13 2016: Mrs Zaghari-Ratcliffe begins a hunger strike, which she ends after five days amid her family’s fears for her health.

January 2 2017: Mr Ratcliffe says Mrs May and her ministers could have ‘publicly stood up for Nazanin more’ and should have called for her release. Mr Ratcliffe said: ‘She raised those concerns in September. What happened after September? Nothing much, really.’

April 24 2017: The family of Mrs Zaghari-Ratcliffe say she has lost the final stage of her appeal against the sentence.

November 6 2017: It is feared Mrs Zaghari-Ratcliffe may face a further period of imprisonment because of remarks made by then-foreign secretary Boris Johnson. Mr Johnson told a parliamentary committee the previous week that Mrs Zaghari-Ratcliffe was working in Tehran training journalists at the time of her arrest in 2016. Four days later, she was summoned before an unscheduled court hearing, where the foreign secretary’s comments were cited as proof that she was engaged in ‘propaganda against the regime’.

November 7 2017: It is announced that Mr Johnson told his Iranian counterpart in a phone call that his comments to a Commons committee provide ‘no justifiable basis’ for further legal action against Mrs Zaghari-Ratcliffe. A Foreign Office spokesman says Mr Johnson now accepts that he ‘could have been clearer’ when he told the Foreign Affairs Committee that the British woman had been training journalists in Iran at the time of her arrest.

November 12 2017: Mr Ratcliffe says his wife has seen a medical specialist after finding lumps on her breasts and is ‘on the verge of a nervous breakdown’.

December 12 2017: Mr Johnson said he and his Iranian counterpart spoke ‘frankly’ regarding the case of Mrs Zaghari-Ratcliffe, during talks in Tehran.

Later in December 2017: Mr Ratcliffe said he believes there is ‘still a chance’ his wife may be released in time for a dream Christmas together.

December 28 2017: Mr Ratcliffe says he is in limbo waiting for news of his wife’s release but has not given up hope, and describes the situation as ‘a lot more positive’ than last year.

April 14 2018: Iranian ambassador to the UK, Hamid Baeidinejad, says the Iranian government is doing its best to secure Mrs Zaghari-Ratcliffe’s release, saying the judicial process was ‘complicated’ but insisted ‘we are trying our best’.

May 21 2018: Mr Ratcliffe says his wife has been told to expect another conviction after appearing in court over a new ‘invented’ charge.

August 21 2018: Mr Hunt says he is considering a request by Mrs Zaghari-Ratcliffe’s husband to grant her diplomatic protection.

August 23 2018: Mrs Zaghari-Ratcliffe is given temporary release from prison for three days and her husband says it feels like ‘home is one step closer’. She returns to prison three days later.

September 26 2018: Mrs May and Mr Hunt ramp up pressure on Iran to release the charity worker during talks in New York. The PM tells Iranian president Hassan Rouhani she has ‘serious concerns’ about the jailing of Mrs Zaghari-Ratcliffe.

January 14 2019: She begins a hunger strike in protest over her treatment in jail. The action ends after three days.

January 24 2019: Iranian foreign minister Javad Zarif raises hope of Mrs Zaghari-Ratcliffe’s return to the UK by suggesting she could be freed in exchange for an Iranian woman held in Australia on a US extradition request. The minister subsequently backs away from his comments.

June 15 2019: Mrs Zaghari-Ratcliffe begins another hunger strike, this time lasting 15 days. She is joined, in a show of solidarity, by her husband, who strikes outside the Iranian Embassy in London.

September 23 2019: Mr Ratcliffe says Mr Johnson can make amends for his failings in his incarcerated wife’s case by telling Iran’s president ‘enough is enough’ and securing her release.

October 10 2019: The couple’s daughter, Gabriella, returns to the UK after more than three years living in the Middle East. The child, who is now five years old, had been living with her grandparents in Tehran since her mother was arrested. Her father says: ‘It has been a long journey to have her home, with bumps right until the end.’

December 18 2019: Mr Ratcliffe is joined by Gabriella singing Christmas carols outside Downing Street, and he called on the Prime Minister to ‘please take responsibility for Nazanin’s case and do what you can to get her and others home’.

January 10 2020: Mrs Zaghari-Ratcliffe spends one night in a clinic after suffering ‘palpitations and panic attacks’ due to the tensions in Tehran, sparked by the death of Gen Soleimani, Mr Ratcliffe says.

January 23 2020: Richard Ratcliffe and their five-year-old daughter Gabriella meet the Prime Minister in Downing Street, but Mr Ratcliffe says there was ‘no breakthrough’.

He tells reporters: ‘I don’t think I have come away thinking Nazanin is coming out tomorrow or even next week, and I will think carefully about what I tell her on the phone on Saturday about where the hope is to come.’

February 23 2020: Commons Leader Jacob Rees-Mogg tells the House: ‘It is a particular concern that the coronavirus has been rumoured – but I emphasise rumoured and not confirmed – to be in the prison in Evin where Mrs Zaghari-Ratcliffe is.’

February 29 2020: Mr Ratcliffe says he believes his wife has contracted coronavirus in prison as he expresses concern at the jail’s ‘refusal to test her’.

March 3 2020: The couple’s Labour MP, Tulip Siddiq, says she believes Mrs Zaghari-Ratcliffe may be temporarily released from jail due to the Covid-19 outbreak in Iran.

She tweets: ‘News from Iranian Ambassador that my constituent Nazanin Zaghari-Ratcliffe may be released on furlough today or tomorrow from prison in Iran.

‘If this is true, Nazanin would welcome leaving Evin jail, but we’ve been here before.’

March 17 2020: Mrs Zaghari-Ratcliffe is temporarily freed from jail. She says she is ‘happy to be out, even with the ankle tag’ and can only go within 300 metres of her parents’ home.

March 28 2020: Mrs Zaghari-Ratcliffe’s temporary prison release is extended to April 18 and Mr Ratcliffe says his wife’s file has been put forward to the Iranian prosecutor general to be considered for clemency.

April 21 2020: After a delay, Mrs Zaghari-Ratcliffe’s prison release is extended again for around one month. Mr Ratcliffe, speaking on BBC Radio 5 Live, reveals that the family are able to talk via video calls for about four to five hours a day.

May 26 2020: Mr Ratcliffe says the family are on the ‘cusp of potentially good news’ and thinks the family could find out about a decision on her clemency the following day.

August 24 2020: Lawyers for Mrs Zaghari-Ratcliffe ask Defence Secretary Ben Wallace for a meeting and call on the British Government to stand up to Iran over its ‘abusive treatment’.

September 8 2020: Mrs Zaghari-Ratcliffe appears before a branch of Iran’s Revolutionary Court in Tehran, where she faces a new charge.

March 7 2021: Mrs Zaghari-Ratcliffe’s sentence is due to come to an end.