Jailed opposition activist Alexei Navalny says he has been designated an ‘extremist and terrorist’ by a prison commission, but jokes that ‘he doesn’t have to kiss a portrait of Putin’

Jailed Kremlin critic Alexei Navalny said on Monday that prison commissioners have designated him an extremist and a terrorist.

Navalny published a lengthy Instagram post in which he described the proceedings of the commission and their unanimous vote to designate him as a terrorist, but also said the commission no longer considered him a flight risk.

The decision represents yet another escalation of official pressure against Navalny, one of President Vladimir Putin’s most prominent domestic critics, who is already serving a two-and-half-year sentence for parole violations.

Navalny, who claims his charges have been trumped up to hamstring his burgeoning political career, said he welcomed the fact he was no longer designated an escape risk as he would be less-frequently disturbed by prison guards.

‘It’s just that there is now a sign over my bunk that I am a terrorist,’ said Navalny in the post, which was published with the help of his lawyers.

‘I was worried they would order me to kiss a portrait of Putin and learn quotes from Medvedev by heart.’

Neither Russian authorities, nor the Federal Penitentiary Service (FSIN) have officially confirmed Navalny’s status change and have not replied to a request for comment. 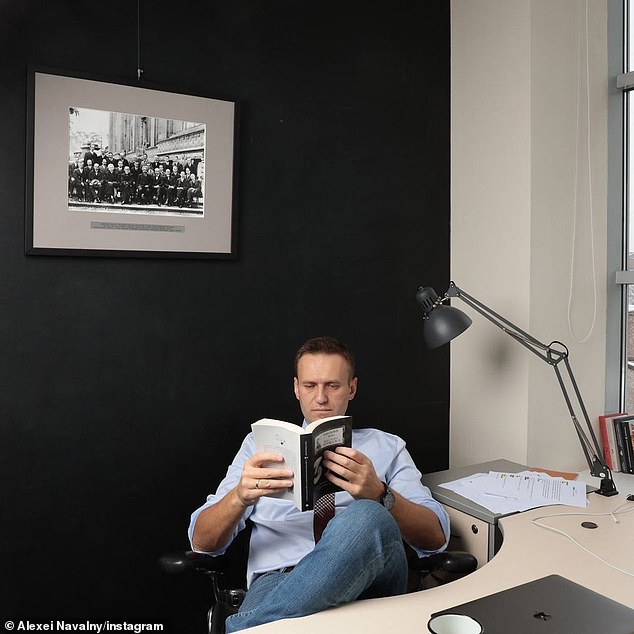 Navalny published a lengthy Instagram post on Monday in which he declared the prison commission labelled him a terrorist, but joked that he was just happy they didn’t order him to kiss a portrait of Putin 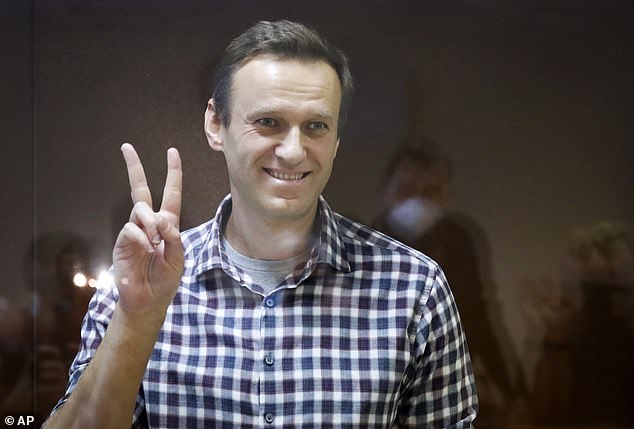 Navalny, 45, was jailed after returning to Russia at the start of this year from Germany, where he had spent months recovering from being poisoned with the nerve agent Novichok in August 2020 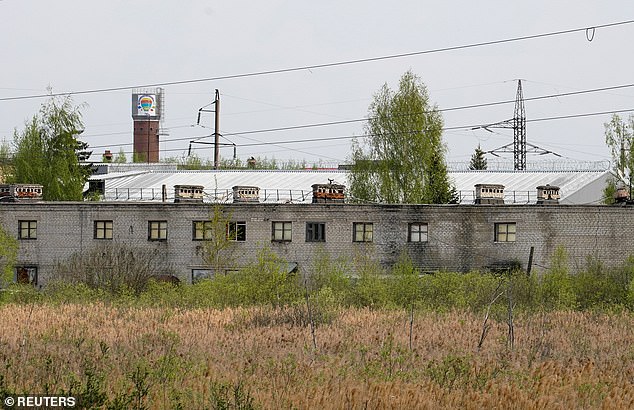 This image shows the IK-2 male correctional facility, where Navalny is serving a two and a half year sentence for charges widely thought to be false, in the town of Pokrov, Russia

Navalny, 45, was jailed after returning to Russia at the start of this year from Germany, where he underwent months of treatment to recover from being poisoned with a rare nerve agent in Siberia in August 2020.

The Kremlin denied any involvement in poisoning him and has repeatedly said that his treatment is a matter for the prison service, while Putin has been reluctant to mention his political opponent’s name in any speeches or press events.

Navalny rose to prominence in 2011, after he delivered an interview in which he described Vladimir Putin’s United Russia party a bunch of ‘crooks and thieves’ and set about exposing instances of corruption in the party via his non-profit ‘Anti-Corruption Foundation’ (FBK).

He launched a political career and mounted a considerable challenge against Putin and United Russia, before he was found guilty of embezzlement of funds – charges which are widely thought to be false and invented to stifle opposition to United Russia.

Navalny’s movement suffered a new blow in June, when the Moscow City Court ruled the FBK, whose investigations into corruption among dozens of high-ranking Russian politicians had alleged that billions of dollars had been embezzled and sparked mass riots, as an extremist organisation and liquidated the organisation.

Meanwhile, many of Navalny’s allies have had their homes raided or their freedom of movement restricted, forcing some to flee abroad to escape persecution.

Navalny was tipped by many to win this year’s Nobel Peace Price for spending well over a decade of his life fighting corruption in Russia and being persecuted for it.

But the prize was instead awarded last week to journalists Dmitry Muratov of Russia and Maria Ressa of the Philippines, and Navalny took to social media to congratulate his countryman.

‘Russia and the Philippines are such different countries, but the leaderships are similar, especially in their endless lies and hatred of those who expose the lies,’ Navalny said in a Monday post on Facebook.

‘With all my heart, I congratulate Dmitry Muratov and Novaya Gazeta on the Nobel Peace Prize.’

Muratov, editor of the independent newspaper Novaya Gazeta, said after the prize announcement that if he had been on the prize committee he would have voted for Navalny.

He also said that the peace prize was awarded to honour his newspaper, not him.