Leaders of a minority Muslim group accused ‘fanatics’ of digging up a baby girl’s body from her grave and dumping it by a roadside.

The three-day-old girl was an Ahmadi Muslim and had only been buried for a few hours in a cemetery in Ghatura in the eastern district of Brahmanbaria in Bangladesh before being dug up.

Many mainstream Muslims consider Ahmadi Muslims to be ‘infidels’ because they believe their founder was a prophet.

‘Her crime is she was born to an Ahmadi Muslim family,’ said Selim.

A photograph of her body laid on a straw mat on a road was widely shared on social media. 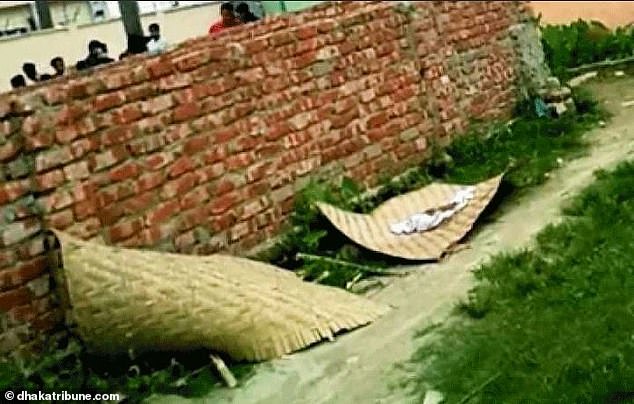 A photograph of her body laid on a straw mat on a road was widely shared on social media. ‘Her crime is she was born to an Ahmadi Muslim family,’ said Selim 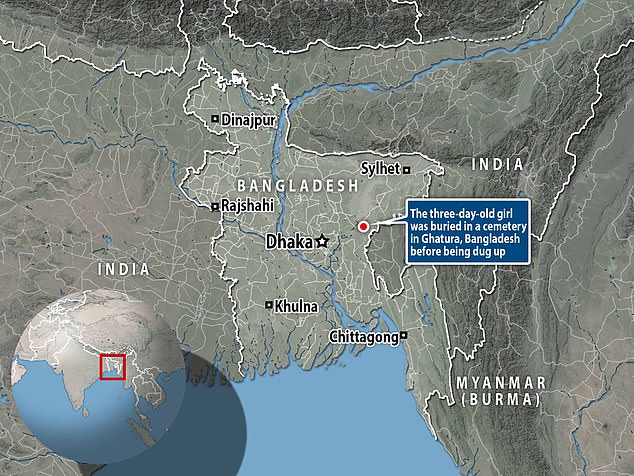 Police in the district said no complaint had been made however and one officer said the incident had been resolved ‘peacefully’.

A local councillor, Azad Hazari, said he had intervened with police and the child was finally buried another graveyard some 10 miles (16 kilometres) away.

A local cleric Munir Hossain denied the body had been exhumed but said local Muslims prevented the parents from burying the baby at the cemetery.

‘It is against the Sharia to let an infidel be buried in a Muslim graveyard,’ he told AFP. ‘The pious Muslims of the village would never let it happen.’

The child’s father told the Dhaka Tribune he saw some ‘anti-Ahmadiyya men’ gather after the burial and exhume the body.

Ahmadis have faced attacks and had religious rights taken away in some Muslim majority countries, including Pakistan.

The 100,000 Ahmadis in Bangladesh have come under regular attack.

In recent months, hardline Muslims have threatened to hold protests demanding that the sect be declared ‘non-Muslims’ by the authorities.

The Persecution of Ahmadis organisation has written reports on the issues Ahmadis face when they try to bury loved one in Muslim graveyards.

They wrote on their website: ‘Usually, authorities, even though unwilling, give in to pressure from the [religious leader] and join him in compelling Ahmadis to undertake the greatly painful and tormenting exercise of disinterment.

‘Often the issue may be raised prior to the burial, and it becomes doubly distressing for the near and dear ones to find a new burial ground for the dead whose departure has already afflicted them.’

In 1999, a bomb at an Ahmadi mosque in the southern city of Khulna, killed at least eight worshippers.

A 2015 suicide blast at an Ahmadi mosque in the northwestern town of Bagmara injured three people.