‘I begged him not to kill me and told him I was pregnant. He sneered then shot me in the head’: Mother describes the night her neighbour sneaked into her home, murdered her partner with a crossbow – then pointed it at her

Laura Sugden immediately knew she was in danger when she noticed dirt marks on her usually spotless cream carpet. Call it a sixth sense, she says today, as she recalls the terrible night in January 2018 that upended her life.

She had gone upstairs to switch on an electric blanket. First the mark, then, with growing dread, she saw that her three-year-old daughter Isabelle’s bedroom door, always left ajar, was closed.

Easing it open, inch by inch, a terrified Laura was confronted by a demonic figure standing in the half-light. It was her next-door neighbour, Tony Lawrence, wearing a head torch and holding a crossbow. It was pointing at her. 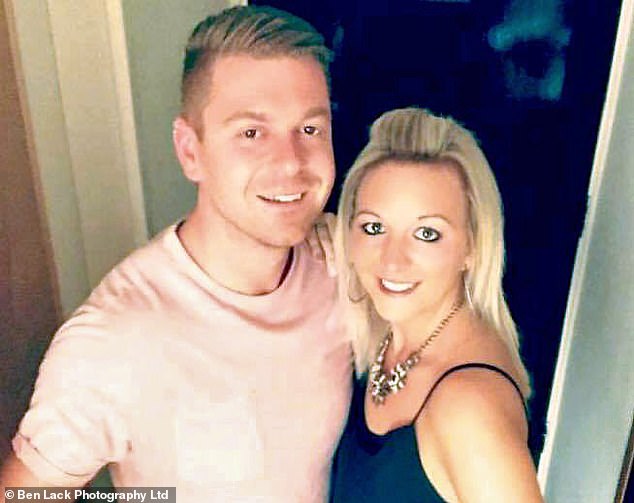 Laura Sugden (right) and her partner Shane Gilmer (left) were attacked by their neighbour Tony Lawrence in January 2018, who was wielding a crossbow. He killed Mr Glimer and shot Ms Sugden in the head. Miraculously, Ms Sugden – who was pregnant at the time – survived the attack, along with her unborn daughter

Instinctively, Laura covered her stomach with her hands. She was four months pregnant. Mercifully, Isabelle was away with her father – Laura’s previous partner.

Tensions between Laura and her 55-year-old neighbour in the remote hamlet of Southburn, East Yorkshire, were high. Weary of Lawrence’s deafening music and the stench of cannabis – the cause of a year-long feud – Laura and her partner Shane Gilmer, 30, had secretly complained to his landlord.

Lawrence found out because he monitored the couple’s conversations using a listening device held against the party wall. In fact he knew many of their intimate secrets, including details of Laura’s pregnancy scan.

If that wasn’t sinister enough, it would later transpire that he was able to slip undetected in and out of Laura’s house, which adjoined his own, after removing bricks from the partition wall in the loft.

Earlier on the night of the horrific attack, Laura and Shane had enjoyed dinner at an Italian restaurant. As they discussed wedding plans over pasta, Lawrence, a troubled loner hellbent on revenge, was already waiting for them inside their home.

Laura recalls everything clearly, as though they were scenes in a horror film. With the crossbow still aimed at her, she slowly edged backwards on to the landing and into her own bedroom. Lawrence followed and pushed her on to the double bed as Shane, hearing the commotion, bounded up the stairs.

Spinning round to confront Shane, Lawrence fired his crossbow, the metal bolt ripping through Shane’s right arm and lodging deep in his chest. Laura says: ‘I heard Shane say, “What the f*** is that?” Then I heard his moan from the hall.’

Somehow Laura managed to dial 999 on her mobile. She let the call connect and then hid the phone in the pocket of her dress, hoping the operator would send help.

Meanwhile, Lawrence dragged Shane by the neck into the bedroom. ‘There was blood everywhere,’ says Laura. ‘Shane slumped down over the edge of the bed.

‘I didn’t know what to do. The arrow had gone into his right arm and it was pinned to his torso. I said to Tony, “What on earth are you doing?” But he had no emotion. His eyes looked black and he had no expression on his face. He told me, “I don’t give a f*** what you are saying.” I said to Tony, “Is that going to kill him?” and he smirked and said, “Yes and I’m going to kill you too.” Stupidly, I thought I could talk him round. I said, ‘Why are you in my house?” He said, “You’ve had me evicted.” ’

Laura denied involvement, but Lawrence replied: ‘You’re a lying bitch. I’ve been listening to you both for the last year.’

Now Laura began pleading for mercy. She says: ‘I said I would ring the letting agent and say we made it all up but he said, “No chance.” I said we would move out. I said we had looked at a house and he said, “Yeah, I know you did but you didn’t f****** move did you?” I told him I was pregnant and he said, “I know.”’

Laura then asked Lawrence to consider her children: ‘I said, “I’m having a baby and we’ve both got children.” Tony replied, “Blah, blah, f****** blah,” and then he shot me in the head.’ 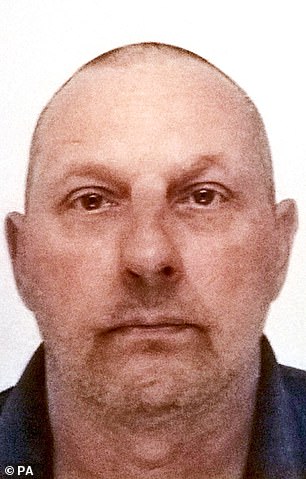 Laura was confronted by a demonic figure standing in the half-light. It was her next-door neighbour, Tony Lawrence holding a crossbow. It was pointing at her

Laura ducked as Lawrence fired and the 15in aluminium bolt embedded into the top of her skull. ‘Blood was gushing down my face and I felt dizzy,’ she says. ‘I heard Shane scream and start crying.’

Lawrence scrambled for another bolt, allowing Laura a vital moment to get off the bed and wrench out the one in her head. Lawrence then wrestled her to the ground and used the bolt as a knife, frantically slashing at her throat. Medics later said the wounds were so deep that they could see her voice box.

Despite being only 5ft 2in and soaked in blood, Laura managed to roll on top of Lawrence. ‘I was gasping for breath and I was pushing the bolt back away from me but I could feel it cutting me,’ she says.

‘I can’t work out how I managed to overpower him, but I remember looking him in the eye and for the first time he looked scared – scared but angry at the same time.

‘I said to Shane, “I’ve got him, can you help me?” But he looked at me with tears running down his face and said, “I can’t.” He was beside himself. It was absolutely awful.’

A panicked Lawrence prised himself free and ran from the room. Laura crawled to comfort Shane. ‘He squeezed my hand and said I needed to go and get help. I didn’t want to leave him, but he said, “If you don’t go and keep you and the baby safe I will never forgive you.” He squeezed my hand again and said, “Be strong. I love you.” Those were the last words he said to me.’

Reluctantly agreeing to seek help, Laura ran downstairs. As she fumbled with her keys to open the back door, she heard Lawrence take a few steps behind her, then stop and turn back. In the cold night, Laura staggered more than 300 yards down the driveway, pleading with the 999 operator on her mobile to send an ambulance.

Losing blood and barely able to stand, she knocked on the door of neighbours Zoe and Tim Rymer. Her injuries were so horrific that they assumed she had been thrown through a car windscreen. They probably saved her life by putting pressure on her head and neck wounds to stem the blood. 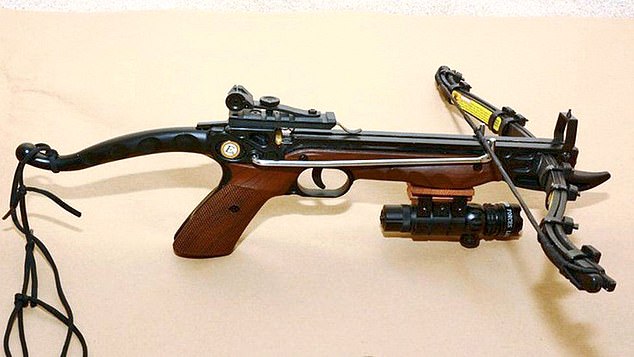 Laura is speaking now as she launches a campaign for tighter controls on crossbows. Currently anyone over 18 can buy one without any background checks. Weapons like the one used by Lawrence are available online for only £150. Police found three in his home

Lawrence, meanwhile, had sped off in his car. Shane – fearing that Laura had been abducted by their deranged neighbour – dragged himself downstairs to call for help.

‘Oh God. I think I am going to die. I need to say something. I love my children,’ he told the 999 operator. ‘My stomach is killing me. Oh my God, I really, really wanted this baby, I really wanted it. I feel like I’m fading. I’ve lost so much blood.’

A paramedic and three police officers smashed into the house at 9.40pm – just 30 minutes after the attack began.

But confusion at the scene meant the first ambulance to arrive was turned away by armed officers who had not been given clearance to enter the house. It meant the couple did not get to Hull Royal Infirmary until 11.30pm.

Despite the frantic efforts of surgeons, Shane died soon after.

Laura disagrees with the coroner who, at an inquest held earlier this month, found the delays were ‘inevitable’ given the remote location of their home.

She also disagrees with the results of investigation by the Independent Police Complaints Commission, which cleared Humberside Police of any failings.

Laura says that over the months before the murder, the couple had called police five times about Lawrence, including about an incident a year earlier when he threatened Shane with an axe.

‘I believe if there hadn’t been delays in the ambulance, Shane wouldn’t have died,’ she says. ‘He was strong and he was shot at 9.10pm. He lost so much blood.

‘If he’d had a blood transfusion at 10.30pm I think he would still be alive.’

As Laura was prepared for surgery, she begged for news of Shane and was told he had died from his injuries.

On the day of her scan – which revealed that her baby had survived the ordeal – Lawrence was found dead by police in a camper van in a remote area of North Yorkshire having taken an overdose.

Laura’s baby, Ella-Faith, is now three, and the image of her father. As she bounces her on her knee, Laura fondly recalls how she and Shane met while working in the housing department of East Riding of Yorkshire Council. Within months, he had moved into her home. 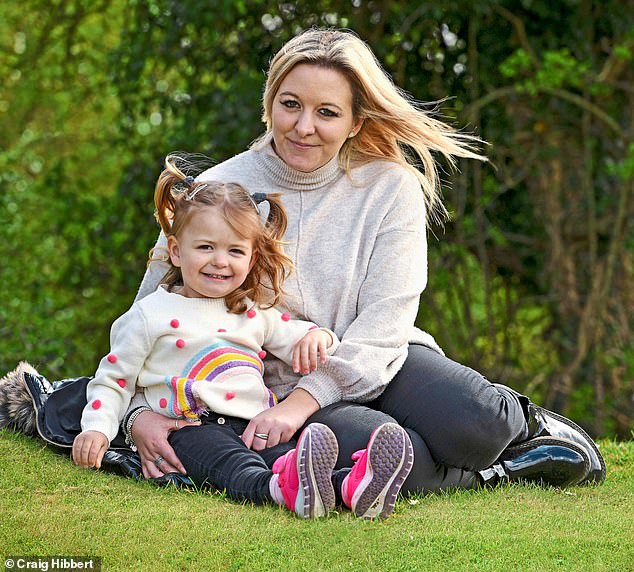 Laura’s baby, Ella-Faith (left), is now three, and the image of her father. As she bounces her on her knee, Laura fondly recalls how she and Shane met while working in the housing department of East Riding of Yorkshire Council. Within months, he had moved into her home

Colleagues teased them, she says, for acting like love-struck teenagers. Shane, who has two daughters from a previous marriage, was thrilled at the prospect of becoming a father again.

Her composure cracks only when she reflects on the impact of Shane’s death. She and Isabelle have had bereavement counselling and Laura has removed all of the doors from the upstairs rooms of her new house ‘so that I can see inside’.

The remaining months of her pregnancy with Ella-Faith were complicated and her daughter was born a week early by caesarean section in June 2018, weighing 5lb 9oz.

‘I didn’t know how I was going to manage on my own, but the minute that Ella was born and I saw her, something in my heart healed,’ Laura says. ‘Just seeing her changed me. She just looks exactly like her dad. Ella was the name that Shane chose. She talks about him, she does understand. I’ve said to her that Daddy is in heaven and that he is a star. She will say to me, “Daddy loved me, didn’t he?” I tell her that he did – very much.’

Laura is speaking now as she launches a campaign for tighter controls on crossbows. Currently anyone over 18 can buy one without any background checks. Weapons like the one used by Lawrence are available online for only £150. Police found three in his home.

Laura wants them to be reclassified as firearms, which would require people to undergo police checks similar to shotgun owners.

At Shane’s inquest, coroner Professor Paul Marks criticised the ‘completely unregulated’ market for the ‘deadly and vicious’ weapons and said he would share his concerns with the Government.

Laura now plans to lobby MPs and start a petition to regulate crossbows, adding: ‘I’m determined to stop another potential lunatic from buying one. I don’t want any other family to go through what we have.’