Mugger faces jail after his attempt to rob retired bus driver, 77, at cashpoint ended in failure when grandfather squared up to him shouting ‘Do you want some of this pal?’

A blundering mugger is facing jail for trying to rob Britain’s ‘hardest grandad’ at a cashpoint – only to be fought off by the brave pensioner.

But the flat-capped shopper put up his fists to say: ‘Do you want some of this pal?’ 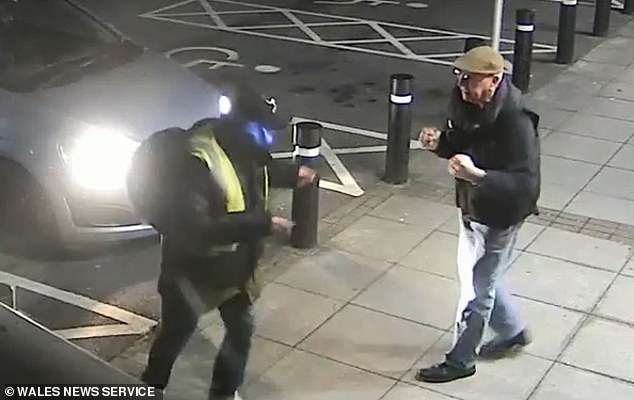 Trevor was using a cash machine at Sainsbury’s in Roath, Cardiff, at 6am when he was approached by the crook who demanded ‘give me your money or I’ll stab you’.

CCTV shows instead of handing over the cash, Trevor put up his fists and saw his attacker off.

Trevor, of Tremorfa, Cardiff said: ‘I got out my £20 and had just put my wallet back in my pocket when this bloke came from nowhere.

‘When he demanded I hand over my money, I replied: “You what? Do you want some of this, pal?” And I put up my guard.’

Trevor said he could only punch left handed after previously suffering a broken shoulder in a fall at home but said he managed to catch Collins on the jaw. 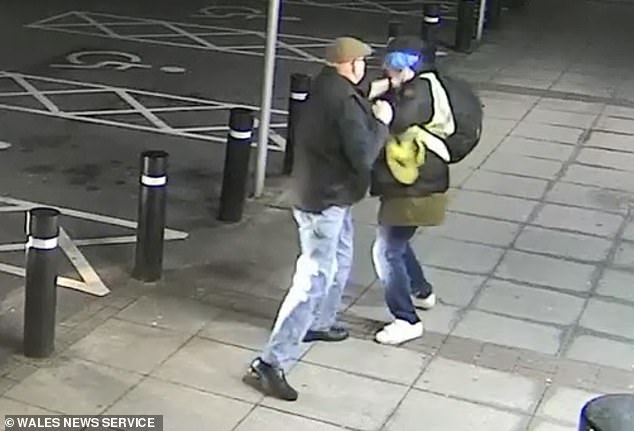 However, the retired bus driver fought off the blundering mugger, who is now facing jail 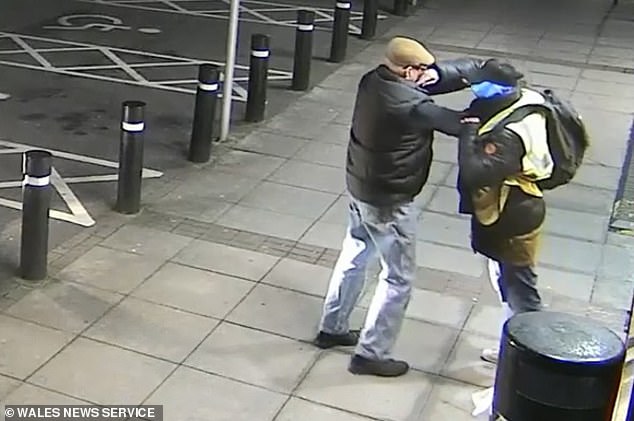 Instead of handing over the cash, the 77-year-old put up his fists and saw his attacker off

Trevor said: ‘I cracked him a couple of times and he looked stunned, like he couldn’t believe what I was doing. And, to be honest, neither could I.’

Former bus driver Trevor, who was allegedly told the mugger had been holding a pencil instead of a knife, said he had never been a fighter before the attempted robbery.

‘I’ve never had a fight in my life, even when I was dealing with troublemakers on the buses years ago,’ he said.

‘If anyone got on who was drunk, aggressive and refusing to pay, I’d go, “just go and sit down, mate” – it wasn’t worth the hassle.’

‘I’m surprised how calm I’ve been about it all. I’ve been expecting the adrenaline to kick in at some stage and for my hands to start shaking, but no, nothing. 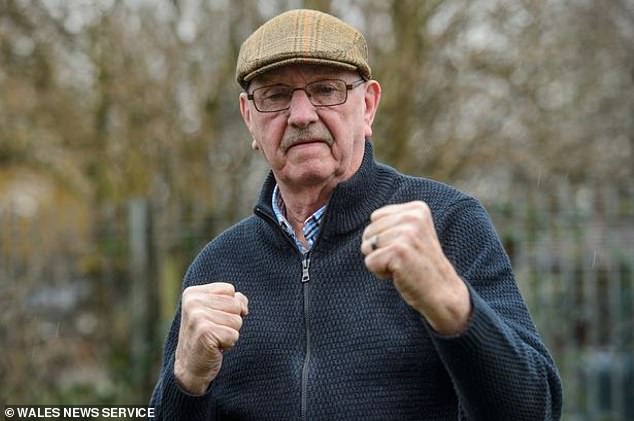 After being approached by the mugger, Trevor (pictured) shouted to his attacker: ‘Do you want some of this, pal?

‘After he’d gone I just drove home and gave my son a lift to work. It wasn’t until about 10am that I called the police.

‘The officers who came to my house afterwards said he still could have done some damage with it though. They said at one point in the video he had it held against my neck.

‘I’ve been getting lots of texts, as well as mentions on Twitter and Facebook apparently, but I leave all that internet stuff to my granddaughter.’

Detective Constable Stephen Mayne added: ‘The victim in this case showed great bravery, however he has been left shaken.’

Collins, of Tremorfa, Cardiff, admitted attempted robbery. He was remanded in custody and will be sentenced at Cardiff Crown Court on Thursday.