A Pascoe Vale mother who fatally shot her daughter before turning the gun on herself during a psychotic episode had been telling doctors and those closest to her of her plan for more than a year.

Deputy State Coroner Caitlin English said investigations into the death of three-year-old Aziza Beck found there was confusion between her mother’s GP and psychiatrist as to who was in charge of the woman’s psychiatric management after she began exhibiting symptoms in 2015. 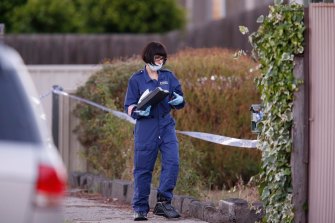 Police and forensic experts investigate after a woman and child were found dead in a house in Pascoe Vale.Credit:Darrian Traynor

In January 2017, Mohamed Beck returned home from work to find his wife, Aisha, and daughter dead in a fatal act of family violence.

“Whilst filicides are rare, they have significant and far-reaching impacts on those involved and the broader community,” Ms English said.

“I am satisfied Mrs Beck killed Aziza and took her own life whilst in the midst of a psychotic episode.”

Mrs Beck met her husband Mohammed Beck in 2005 while she lived in Myanmar and he travelled there from Singapore, before they both moved to Australia to start a family.

They married the following year and, following IVF treatment, gave birth to baby Aziza in April 2013.

The coroner found that in September 2015, police were called to Mrs Beck’s home after she began approaching neighbours and asking to speak with former prime minister Tony Abbott.

When officers arrived, Mrs Beck told them she was “the mother Mary” and had “just given birth to Jesus”.

She was taken to the Northern Hospital where she was placed on a temporary treatment order. 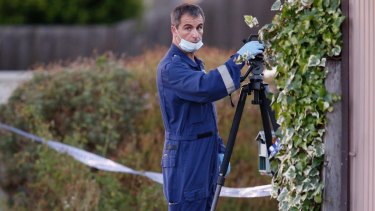 Police on the scene in Pascoe Vale in January 2017.Credit:Darrian Traynor

There, her doctor noted she was experiencing periods of distress and felt that God was “ready to take her”.

The following year Mrs Beck told her husband she’d had thoughts of killing herself and her family, fearing no one would be able to care for their child if she was no longer there.

In February 2016 the mother was referred to a psychiatrist after also revealing her suicidal ideation to her doctor. A report from the psychiatrist showed the mother had also openly disclosed homicidal and suicidal thoughts.

Ms English said a coronial investigation had found Mrs Beck was sent back to her doctor after seeing the psychiatrist with a basic management plan that did not address social or psychological aspects of her mental health.

Her doctor was also provided with no advice on what to do if his patient stopped taking her medication, the warning signs of her deteriorating mental state or a crisis plan.

The coroner found the psychiatrist also took no further role in her care after issuing her with a prescription for medication with five repeats.

As a child, Mrs Beck had also witnessed her own mother’s suicide which had led to significant ongoing trauma, the coroner said.

“The evidence is unclear as to which doctor was responsible for Mrs Beck’s continued psychiatric management,” Ms English said.

On January 23, 2017, Mr Beck returned to work after taking a seven-month break to take care of his wife.

Six days later, Mr Beck returned home to work to find his wife had shot their daughter before turning the gun on herself. 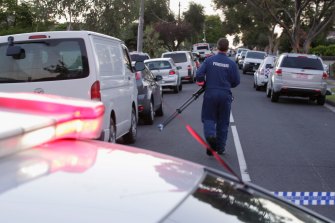 The firearm used belonged to Mr Beck and had been stored in his gun safe.

The coroner found research showed 67 per cent of mothers who committed filicide were psychotic.

And younger children, particularly those aged below six, were the most likely to be killed by a parent.

“Filicide research indicates that mothers are most commonly motivated to kill their child out of a misguided belief that they are preventing or ending suffering,” Ms English said.

“The available evidence suggests that Mrs Beck strongly believed Aziza would not be cared for if she was no longer alive.”

As part of her findings, the coroner recommended the Royal Australian College of General Practitioners implement a system for more assertive follow-ups and issue alerts for those mental health patients identified as being at high risk of harm to themselves or others.

“However, the Medicare system does not support mental health consultations lasting more than 40 minutes.”