I finally got justice for my daughter: Anguished mother of a 23-year-old student who was gang raped and murdered by four men on a Delhi bus in 2012 speaks out as the killers are executed

The mother of Jyoti Singh, who was gang-raped and murdered on a New Dehli bus in 2012, has spoken out over the executions of her daughter’s killers today, seven years after their crime.

Outside the capital’s Tihar prison where the rapists were executed Asha Devi, 51, declared ‘the beasts have been hanged’ as she made a V-for-victory-sign and said: ‘Finally my daughter got justice after seven years.’

Jyoti Singh, 23, a physiotherapist student was gang raped by six men on a bus in Delhi, India’s capital, as she was returning home with a young male friend from the cinema in December 2012. 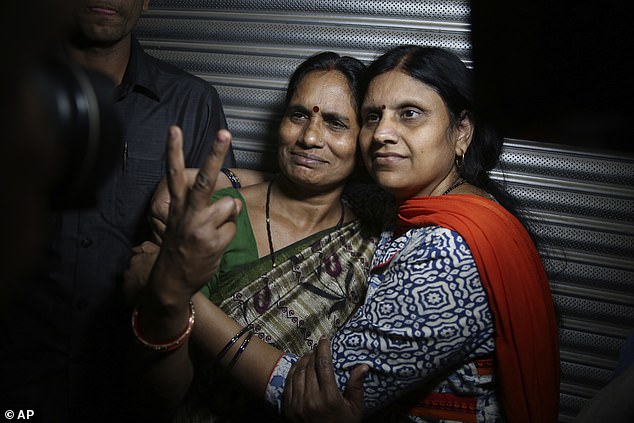 Asha Devi (left), the mother of the 23-year-old student who was raped and murdered in 2012, makes a V-for-victory sign and celebrates with her sister today as her daughter’s killers were executed more than seven years later

The two were attacked with a metal bar which was used to cause Jyoti horrific internal injuries. The couple were dumped naked by the side of the road. While the friend survived, Jyoti died in hospital 12 days later after identifying her attackers.

Ms Devi admits she believes it was better that her daughter Jyoti died after the brutal attack instead of being subjected to the crime ‘over and over again in her fight for justice’.

Following Jyoti’s identification of the men there was an immediate arrest of all six criminals.

However one of them was a juvenile at the time of the incident and was released from prison three years later, and another of the convicts allegedly committed suicide in jail. 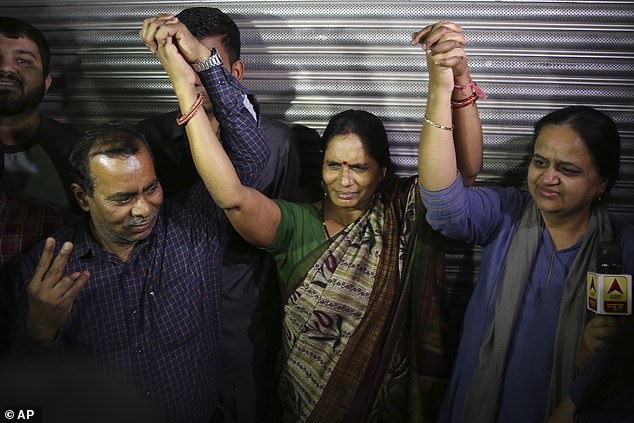 The remaining four – Akshay Kumar Singh, 31, Pawan Gupta, 25, Vinay Sharma, 26, and Mukesh Singh 32 – remained on death row until they were hanged at 5.30am this morning in high security Tihar prison in Delhi.

Speaking just minutes after the executions, the victim’s mother added: ‘I hugged my daughter’s photograph and told her we finally got justice.’

Her father added that his ‘faith in the judiciary had been restored’.

Last month Ms Devi said: ‘There have been many times I have felt it is good that my daughter is not present to witness this. Someone else did the crime but she would have been made to feel like a criminal during this fight for justice.’ 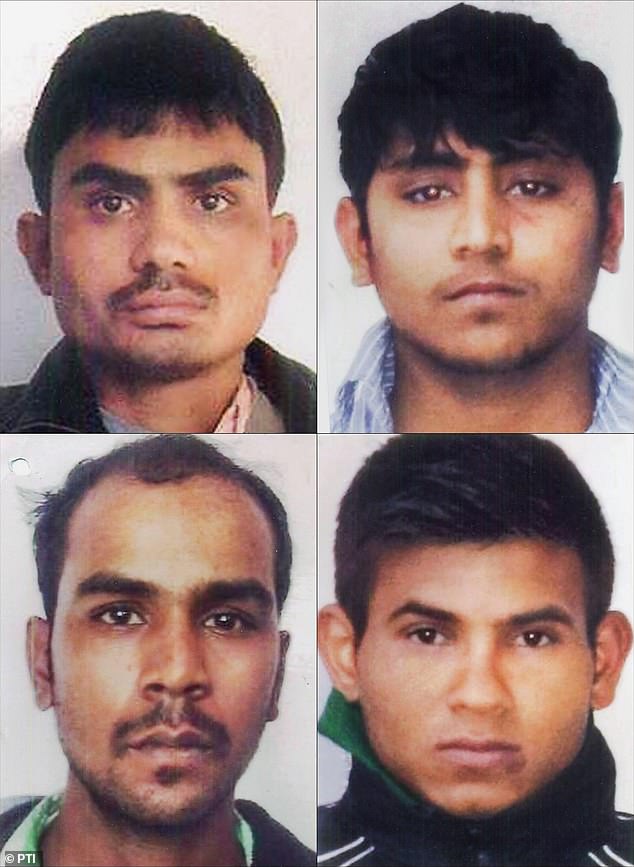 ‘If she were here, she would want to fight, but she would have been tortured. She had already experienced trauma. What pain she must have suffered is something that we can never imagine but if she had survived, how would she have faced all of this over and over again?’

The case caused an explosion of anger over the scale of sexual violence in India and eventually led to tougher laws.

The execution was India’s first since 2015, but it sparked celebrations outside the prison this morning as the hangings were carried out around 5.30am. 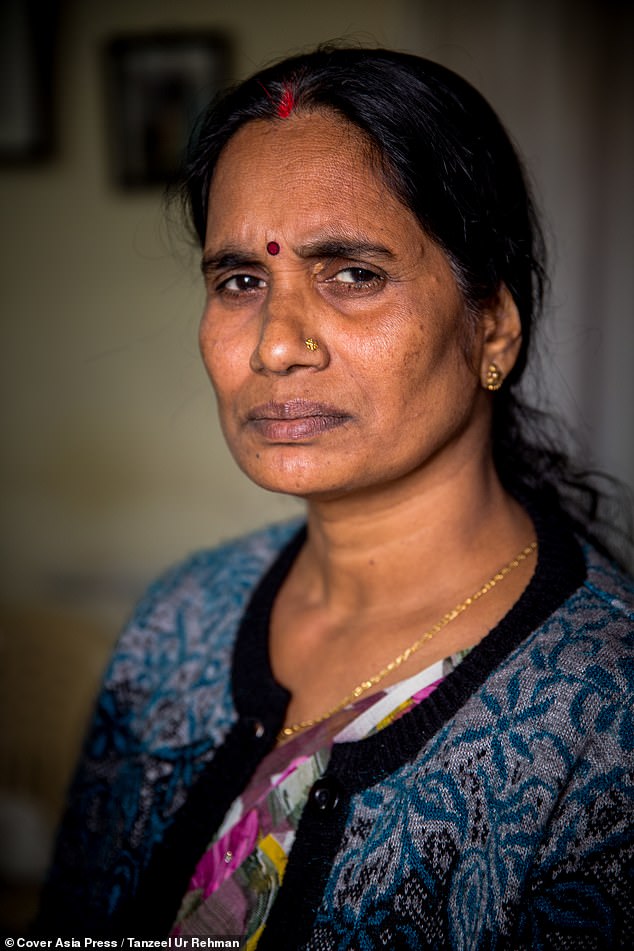 Ms Devi and her husband Badri Singh, 60, added that they feel women have no future in India

Police and paramilitary personnel were deployed to maintain security outside the prison while the executions took place as groups with placards gathered by the gates.

Ms Devi and her husband Badri Singh, 60, added that they feel women have no future in India.

Speaking before the hangings the mother said: ‘There can be no worse case than my daughter’s. I had faith the criminals will definitely be hanged. I had faith in that. Our daughter WILL get justice. And all those women in similar cases will renew their hope in justice. The whole country will get justice. I am not afraid. I will feel comfort that those men – the way they brutally destroyed my daughter’s life – will be dead.’ 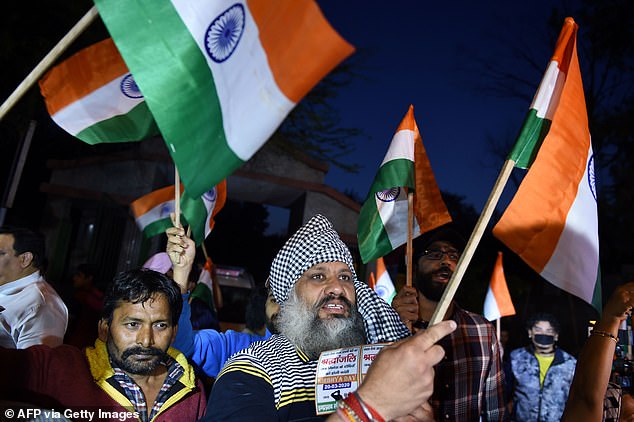 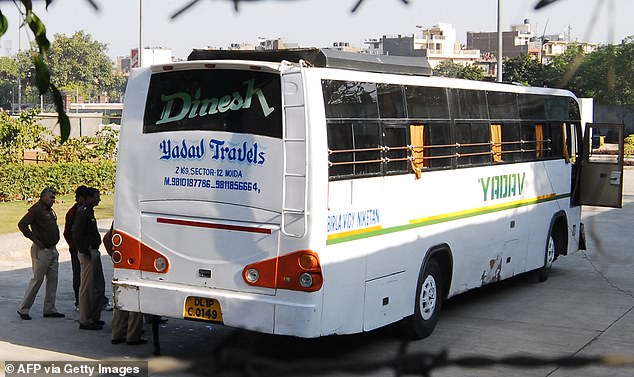 The four were originally sentenced to death by a trial court in 2013 after a 23-year-old physiotherapy student was raped by six men on a moving bus. Pictured: Police investigating the bus suspected to be the location of the crime in 2012

Adding: ‘The perverts in our country just need a female, whether a baby, a young girl or an old lady. They don’t care and considering the loopholes in our judicial system, there is no hope either.

‘If people keep helping the criminals under the umbrella of human rights, I’m afraid of the future for girls in our country. I support capital punishment. It is needed. There have been many cases reported after 2012 but none got justice. We are in an urgent need of improving our judicial system. A death sentence is announced but for years nothing is done.’

The victim could not be named in India under Indian law but was dubbed Nirbhaya – the fearless one – by the press until her mother said she wanted Jyoti Singh’s real name to be remembered. 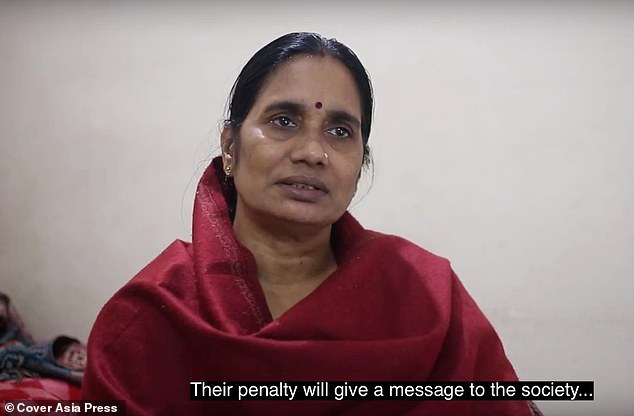 Asha Devi talks about the imminent execution of her daughter’s killers. January 30

All four of those who were executed today had recently filed petitions appealing for their sentences to be reduced to life imprisonment.

India is among dwindling countries with death penalty

India is among the minority of countries to retain the death penalty.

Nearly three-quarters of world’s 195 states have either abolished the punishment or not carried it out over the past decade, according to rights group Amnesty International.

By the end of 2018, 106 countries had completely abolished the death penalty for all crimes, according to Amnesty.

Close to half of them were in Europe and Central Asia.

Another 36 countries retained the death penalty in law but had not carried out executions for at least 10 years.

At least 690 executions were known to have taken place globally in 2018, a decrease of 31 percent compared to 2017, Amnesty says.

The figure, the lowest it had recorded in the past decade, did not however include the ‘thousands’ of executions believed to have been carried out in China, which keeps such data secret.

Last year’s known executions were in 20 countries, with at least 253 recorded in Iran alone.

While this was the most in any another country, it was half the number of 2017 following amendments to Iran’s narcotics law, Amnesty’s report says.

Iran nonetheless accounted for more than one-third of the executions recorded in 2018.

Botswana, Sudan, Taiwan and Thailand all resumed executions, but only accounted for six of the global total.

Among the countries that increased their yearly executions were Belarus (4), Japan (15), Singapore (13) and South Sudan (7).

For the 10th consecutive year, the United States was the only country on the American continent to execute prisoners, putting to death 25 – two more than in 2017.

Almost 400 people are on death row in India.

Its last execution was in 2015 when Yakub Memon, convicted for the 1993 Mumbai bomb attacks that killed 257 people, was hanged in jail.

But these were rejected by the Supreme Court.

The four had stood trial relatively quickly in India’s slow-moving justice system, their convictions and sentences handed down less than a year after the crime.

India’s top court upheld the guilty verdicts in 2017, finding the men’s crimes had created a ‘tsunami of shock’ among Indians.

‘The four convicts were hanged together at 5.30 am,’ said Sandeep Goel, head of the Tihar Jail in New Delhi.

Before the attack Jyoti was studying physiotherapy and worked at a call centre. Her family had moved from a rural area and her father earned around $100 a month as an airport baggage handler.

The men on the bus – Ram Singh, Mukesh Singh, Vinay Sharma, Akshay Thakur and Pawan Gupta – did menial jobs and lived in a slum in south Delhi.

Nearly 34,000 rapes were reported in India in 2018, according to official data. This is considered the tip of the iceberg, with many more too scared to come forward.

But the woman’s ordeal, and the fact that she was part of a generation of young women trying to break out of a still very traditional society, struck a chord.

Women’s activist, Kavita Krishnan, who took part in the huge protests said: ‘It was like the bursting of a dam.

‘It was not restricted to seeking revenge. Women said they do not want to trade their freedom for safety… There was a social awakening of society.’

It led to tougher punishments for rapists including the death penalty for repeat rape offenders.

The executions may spark further celebrations on Friday despite government advice to avoid crowds because of coronavirus, while politicians will likely rush to express their satisfaction.

But for Krishnan, this masks the government’s continued failure to provide justice and improve safety for women.

The government is ‘trying to fix the public gaze on the gallows to divert attention away from what it has failed to do,’ Krishnan said.