Almost 10,000 people including academics, actors and lawyers are urging Prime Minister Scott Morrison to help Afghan nationals, saying Australia has a moral obligation as the humanitarian crisis in Kabul continues.

In an open letter published on Wednesday, signatories called on the federal government to increase Australia’s humanitarian intake by at least 20,000 people, prioritising vulnerable and persecuted Afghans, and expedite the resettlement of interpreters, guides and other personnel involved in Australia’s mission in Afghanistan. 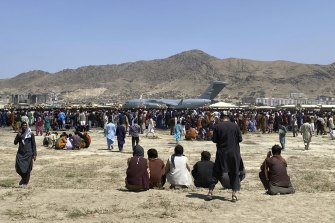 Hundreds of people gather near a US Air Force transport plane at the international airport in Kabul, Afghanistan on Monday.Credit:AP

The letter, which has been collecting signatures for 24 hours, is also calling on the Prime Minister to grant permanent protection to more than 5100 Afghan refugees who are in Australia on temporary visas and to lift the ban on resettlement of refugees to Australia.

“We don’t know how to process this or react. We feel hopeless,” said Zaki Haidari, a refugee who is in Australia on a temporary protection visa. “Many of us have loved ones in Kabul and we desperately need to get our families out. This has proven once again that it is not safe for us to go back and not safe for our families.”

Mr Haidari is a member of the Hazara people, who primarily live in the mountainous region of central Afghanistan and who have been persecuted in the country over multiple generations.

“What will it take for the Australian government to give us permanent protection? To enable us to bring our families here for safety once and for all?”

Two decades after it was ousted from power by the US, the Taliban seized control of Afghanistan this week. Hundreds of thousands of civilians are fleeing, setting off a humanitarian crisis.

Those who have stayed are reckoning with the return of extremist rule under the Taliban’s interpretation of Islam. Militants have shuttered girls’ schools, banned smartphones in some places and forced young men to join their ranks.

On Tuesday Mr Morrison said Australia would not be able to rescue many of the Afghan personnel who assisted with the Australian mission. 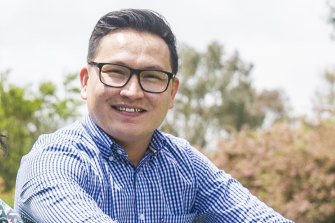 Zaki Haidari wants the federal government to “enable us to bring our families here for safety once and for all”.Credit:Dion Georgopoulos

“I want you to know that we will continue to do everything we can for those who have stood with us, as we have to this day,” he said. “Despite our best efforts, I know that support won’t reach all that it should. On-the-ground events have overtaken many efforts. We wish it were different.”

The open letter asks the Prime Minister “to take urgent concrete steps to support the Afghan people who, having faced suffering, war, injustice and ongoing trauma, are now facing an imminent humanitarian crisis with the violent Taliban takeover of Afghanistan.

“After almost two decades of intervention and promises to the Afghan people, promises of protection for persecuted groups, women, democratic freedoms and rule of law, Prime Minister Scott Morrison has a moral obligation to act in response to the humanitarian crisis in Afghanistan.”

The open letter also asks the government to grant amnesty to all Afghan nationals in Australia who fear returning to Afghanistan.

Another signatory, University of Queensland mental health researcher Sanam Ahmadzada, said members of the Afghan community in Australia feel a sense of “survivor’s guilt” as they “watch the chaos from afar”.

“We can’t forget the mental health implications this has and will continue to have on the entire Afghan-Australian community and the urgent need for culturally safe mental health services.”