This is the moment a brazen migrant’s suspected attempt to sneak into Britain backfired as he realised the lorry he’d hid in was actually heading to Germany.

HGV driver Pete White says the migrant, who managed to smuggle himself into his vehicle, was forced to jump out and hike 40 miles back to Calais.

‘He looked angry at me for what I’d done to him, which I thought was quite ironic. I was just getting on with my job,’ he said.

Pete was driving to Munich to pick up cargo last Thursday when he heard banging on the side of his cab.

The 42-year-old says he was shocked to realise it was a migrant who he believes was  trying to reach the UK – but soon realised he was heading towards mainland Europe instead.

Footage shot through a wing mirror shows the disoriented man slapping the side of the lorry as it hurtles down a motorway.

A second clip shows Pete bluntly shouting ‘You need to jump, or I speed up’ before the man leaps from his van onto a grass verge on the A26 near Aire de Rely, France. 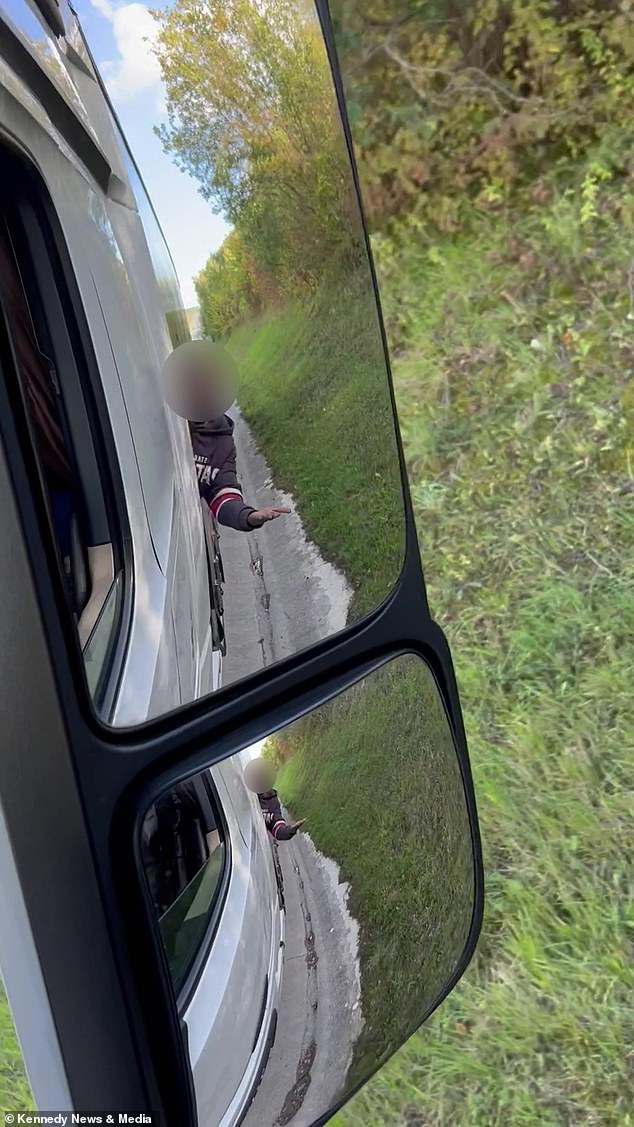 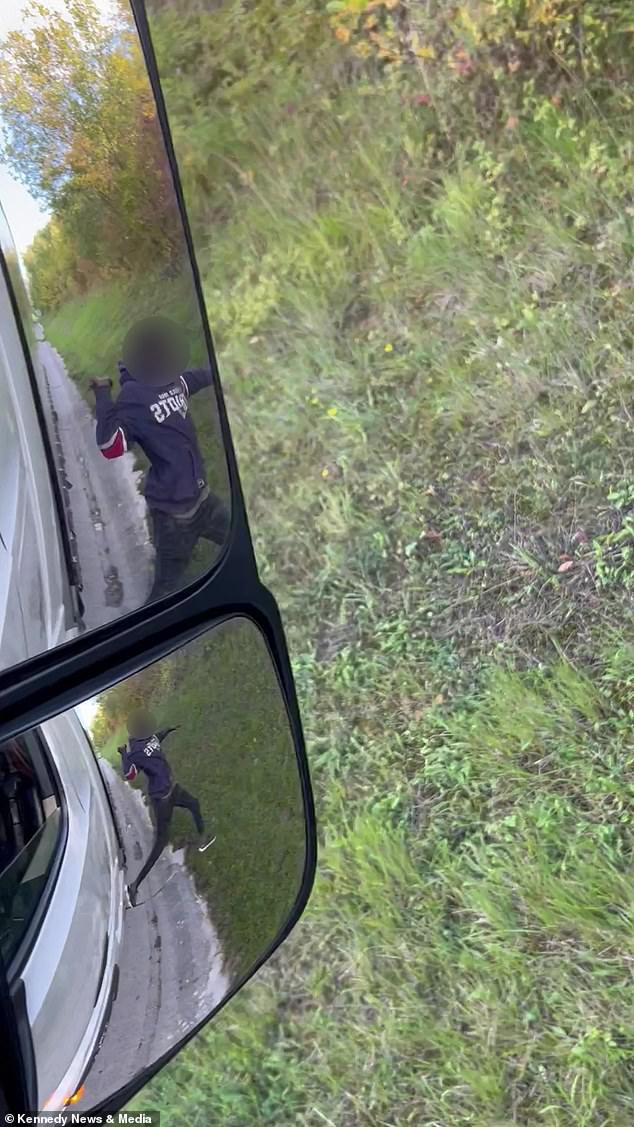 ‘I didn’t want to stop so I just slowed down. He wanted me to stop but I just told him to jump,’ the lorry driver said 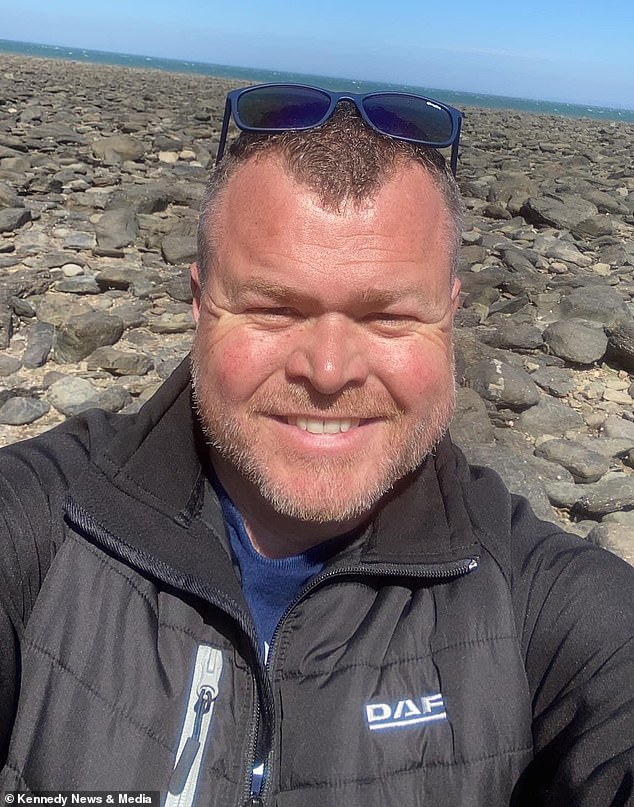 Pete White, a freelance HGV driver, spotted a migrant in his vehicle as he drove down a French motorway

Dad-of-three Pete says he has no sympathy for the man who he believes to be an ‘economic migrant’ rather than a refugee and who left him with £200 worth of damage to his vehicle.

Pete had tried to top up his fuel at a service station in Calais after taking a ferry from Dover and that’s where he believes the man cut through the side of his van to climb in.

Pete, from Weston-super-Mare, Somerset, said: ‘It all backfired and that made me smile afterwards.’

‘I knew the guy needed to get off because that’s the best thing for everyone,’ he continued.

‘Some drivers would have got out and had a fight but I’ve got a family at home.

‘I didn’t want to stop so I just slowed down. He wanted me to stop but I just told him to jump. 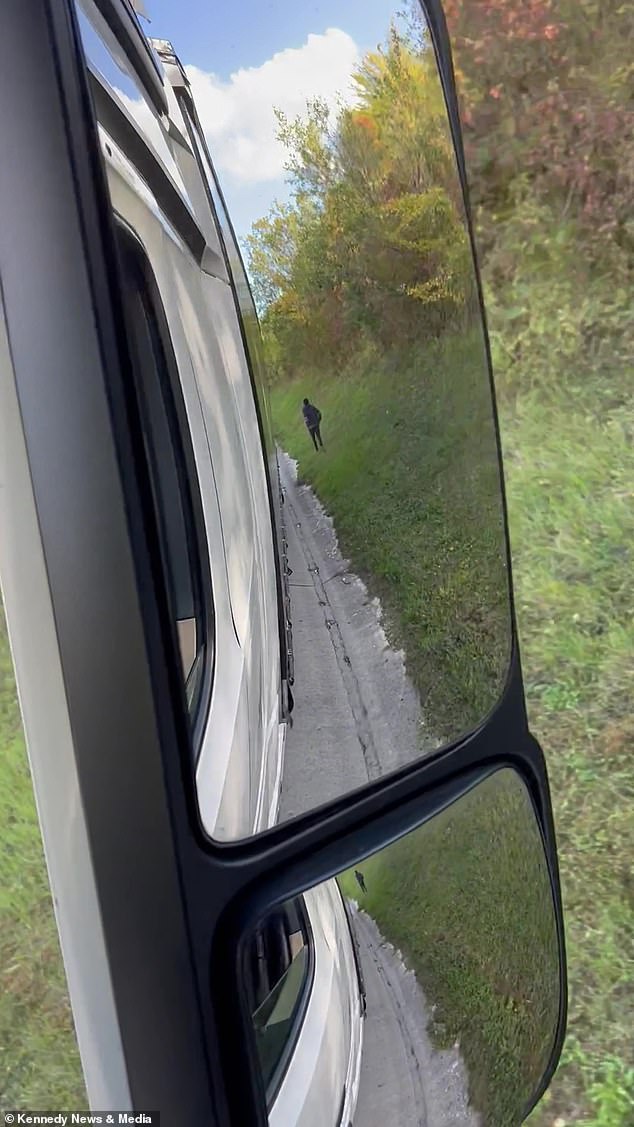 Pete told the man ‘You need to jump, or I speed up’ before the man leapt from his van onto a grass verge on the A26 near Aire de Rely, France 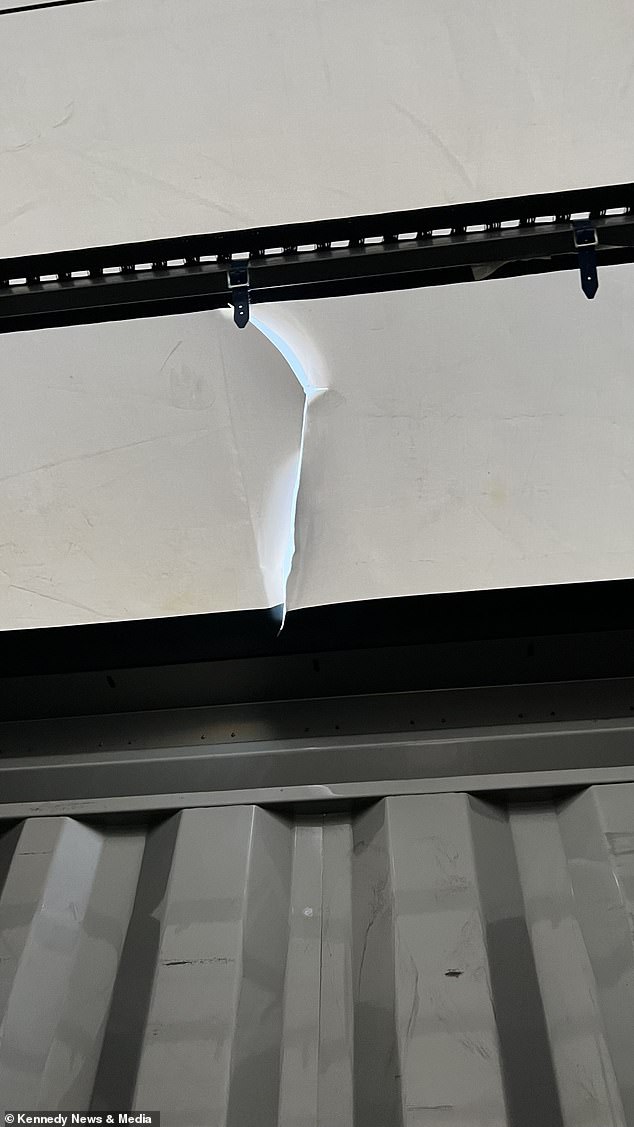 ‘Once he got off, I realised I’d been driving for about 50 minutes and that’s a good 60km away from Calais.

‘I thought he’d been hiding behind the truck and then I remembered I had a curtain-side trailer on and there’s a possibility he cut himself out of the roof.

‘Then I just got angry because I knew I’d have to ring the person I was working for and tell him that his equipment had been damaged.

‘It was a huge shock. I’ve spent 20 years educating drivers how to avoid those situations but someone who is as switched on and experienced as I am, they still managed to get past me.’

Pete is astounded at how the man apparently managed to cut himself out of the trailer, climb onto the roof and get to the side of the van at 55 miles per hour on a French motorway.

He says he continued to drive slowly in case there were any other migrants left in the vehicle and stopped shortly after to check for damage.

The stunned driver believes the man must have climbed in during a 30-second window between him checking the van and pulling away from the service station, which had run out of fuel.

He insists he’s filled up there hundreds of times before but hasn’t had a problem despite regularly seeing migrants try to hitch a ride inside UK lorries.

Pete said: ‘Refugee families need to be helped and welcomed, but economic migrants who are young men should not be making their way to the UK the way they are.

‘I have seen and spent thousands of pounds on repairs. We’ve had insurance claims of up to £100,000 for damage to goods and trailers. I have zero empathy for these guys.

‘If it was a woman and a child in there I would have reacted differently and been sympathetic, but young men who cause damage when the industry is hard enough as it is, I have no sympathy.

‘There was a French police van, but there were at least six of them in a minibus scrolling on their phones. They don’t care anymore. They’re just as fed up as lorry drivers are.’

Freelance driver Pete says he spent around £200 fixing the lorry after returning it to the UK.