A mother-of-four who dumped her husband for her ‘virtual husband’ who she met and married in an online video game – before saying their ‘I do’s’ in real life.

Three years ago, Kelly Sexton, 41, of Kent, England, told her husband of nine years that she wanted a divorce within days of meeting Nick Von Asten, 30, of Wisconsin, in Second Life –  an online simulator game where players can choose an avatar and live out their fantasies.

After years of playing at being a married couple and even having a baby in the virtual world, Sexton and Von Asten married in real life in December 2019. 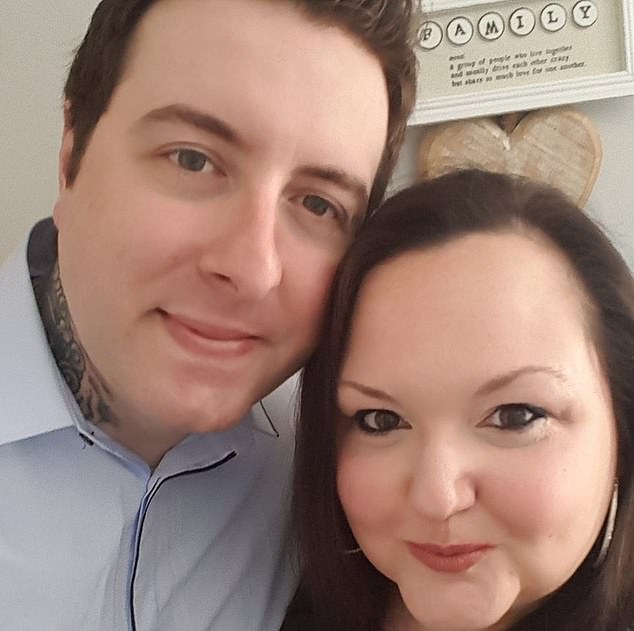 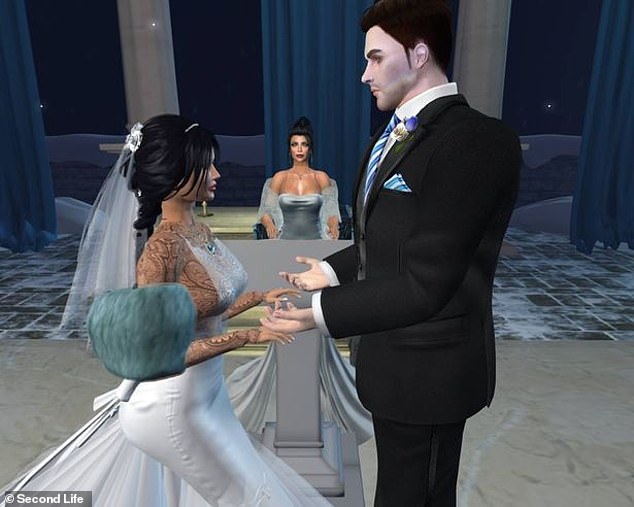 Sexton’s avatar, Selena (left), and Von Asten’s Staticmuse (right) are shown on their virtual wedding day. They married in the game and had a baby before they met in real life 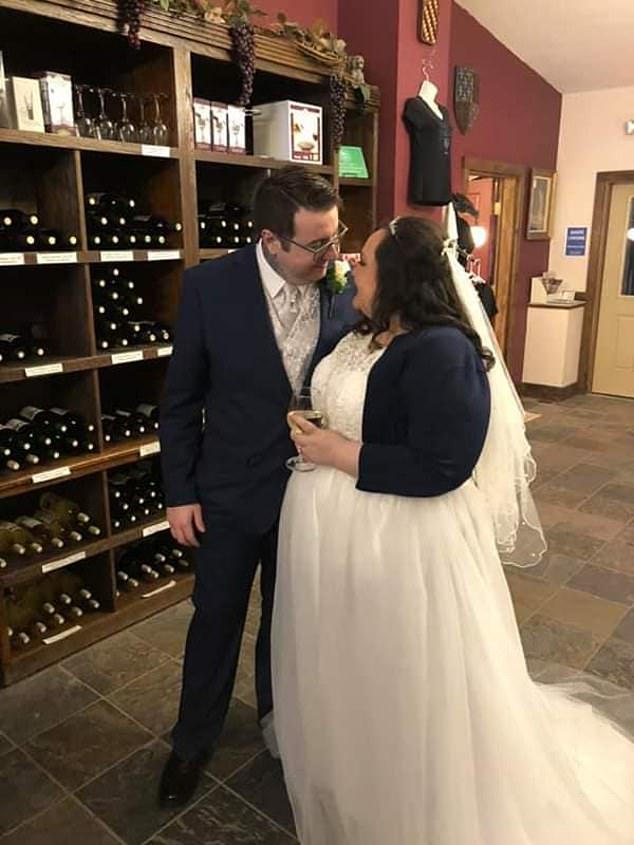 Sexton and Von Asten ‘met’ in Second Life on New Year’s Eve 2016, while she was using her avatar, Selena – a slim, blue-eyed, tattooed babe – and he was the tall, dark-haired, buff Staticmuse who pole danced in front of her when they first met.

Sexton, who has fibromyalgia, ME and non-epileptic attack disorder (NEAD), told the Mirror that she played Second Life as a way to escape her pain and real-life problems. 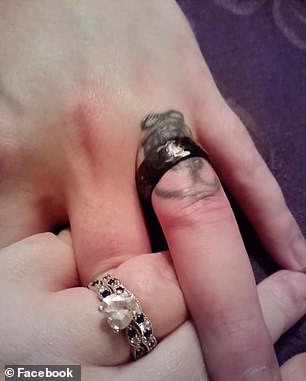 ‘Selena is what I would ideally look like – curvy, tall,’ Sexton told the newspaper, recalling the moment when Staticmuse walked into the rock nightclub that Selena was working in at that night.

‘He wasn’t wearing much – boxer shorts, angel wings and sunglasses,’ she said. ‘Then he started pole dancing in front of me and it was so funny. I just thought “wow, he looks interesting”. I started flirting with him.’

Staticmuse then asked Selena on a date, which led to them spending hours in a virtual amusement park.

‘It really did feel like a first date,’ Sexton said.

Sexton – still married at the time in real life – told Von Asten that she was ‘happily married and not interested in anything funny’, but added that they could be boyfriend and girlfriend while playing Second Life.

Over the next few days, Sexton said, while talking virtually with Von Asten for marathon 20-hour sessions, she wound up revealing that she wasn’t in love with her husband and hadn’t been in years. 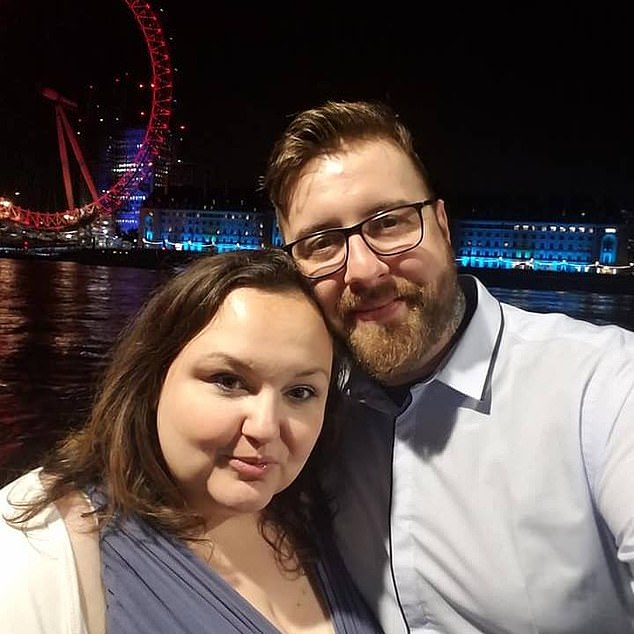 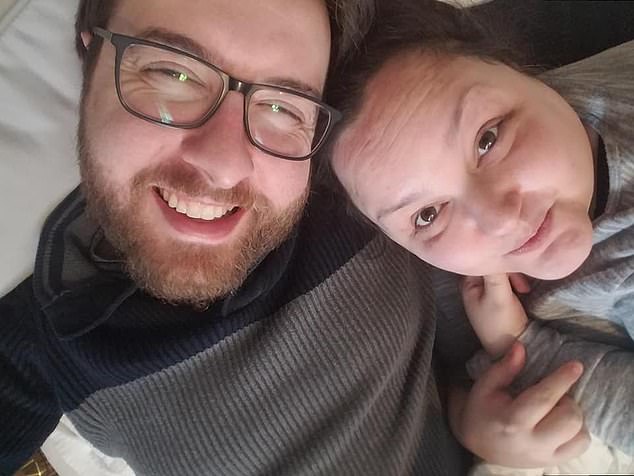 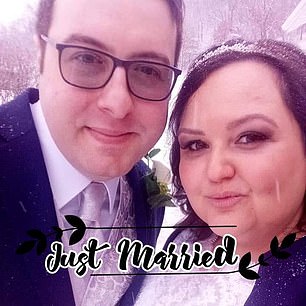 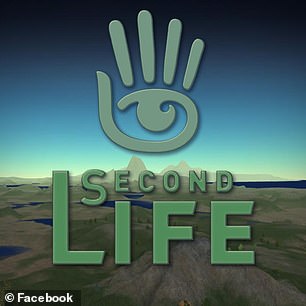 Sexton and Von Asten (left) are pictured on their wedding day, which occurred three years after they first meet while playing Second Life (right), a sprawling virtual online game 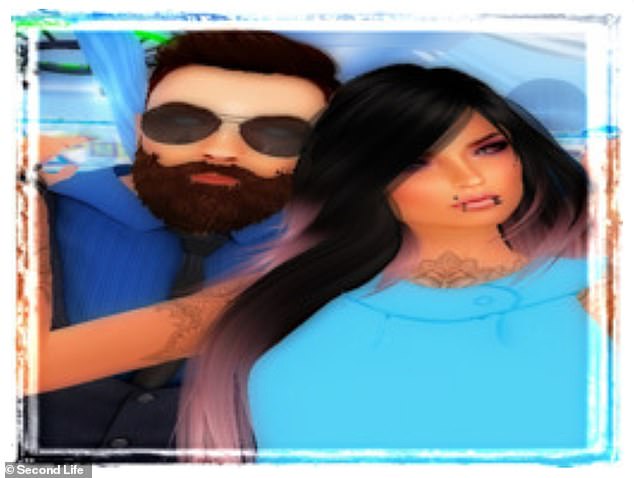 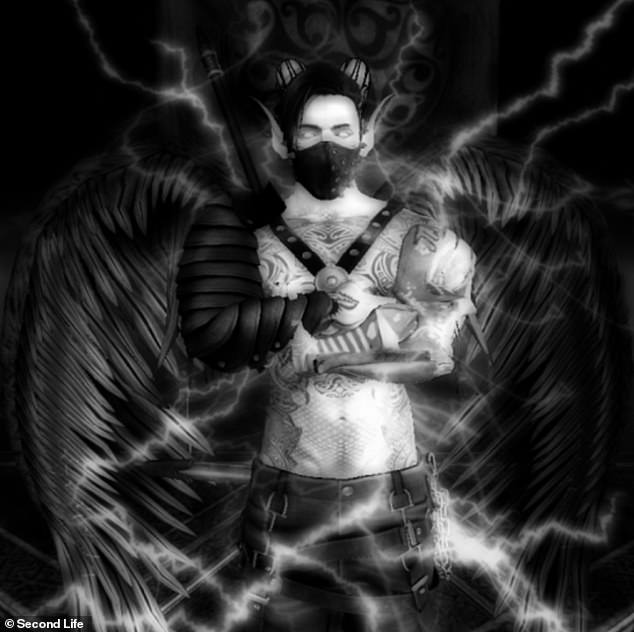 Staticmuse is a tall, dark-haired, buff and tattooed figure. The avatar was pole dancing when Sexton first saw him online on New Year’s Eve 2016 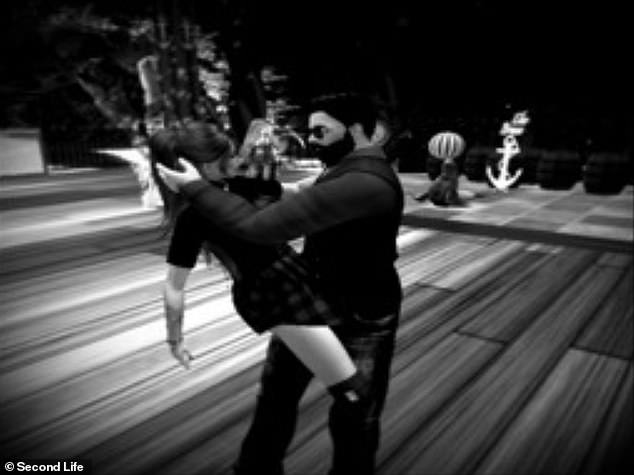 Sexton said that her Selena avatar (pictured with Staticmuse) worked at a rock nightclub and looks the way she wished she did in real life, curvy and tall

‘Then I realized I was living this life I was feeling trapped in, which is why I was always on the game,’ she said, noting that their ‘massive connection’ was one of the reasons why she fell for Von Asten.

‘I was wary, but I fell in love with his voice and how easy he was to talk to,’ she said.

Within days, Sexton admitted to her husband at the time that she wasn’t in love with him and was unhappy – he responded in kind.

‘His reaction was a relief,’ she said, adding that she eventually told him about Van Asten and that her then-husband ‘had no qualms about it.’

She said that he’s since met Von Asten and that ‘they get on well.’

What is Second Life?

-It’s similar to a massively multiplayer online role-playing game, however there are no quests or actions to complete, users simply exist in this world

-Users create avatars of themselves and use them to inhabit the world, interacting with each other and objects, attend virtual events and more

-Second Life has its own virtual currency, which is exchangeable in real-world money

-In 2015, it was estimated that Second Life users had cashed out about $60million through the virtual world

Sexton and Von Asten’s online relationship moved quickly – that within 10 days of playing, they said they were in love with each other, even though neither knew what the other looked like in the real.

‘I started to panic that maybe I was being catfished, after all I was a 37-year-old disabled mother – hardly a catch,’ Sexton said.

Then, Von Asten sent a picture of himself to Sexton and she realized that ‘was absolutely gorgeous,’ which led to a video call.

She said that no one had ever looked at her the way Van Asten did on the call and that ‘it was just love.’

The two got married in Second Life on February 25, 2017 – about a year and two months after first meeting. The wedding was attended by virtual family and friends from all over the world.

Sexton described the wedding as being ‘a proper ceremony with vows we wrote ourselves’ and said that it took place at a little chapel that Von Asten had built himself, one piece at a time.

‘We didn’t think we could have a real relationship together because of distance and me being 10 years older,’ she said.

They continued their online romance – getting a digital house and going through a virtual pregnancy and having a baby – until December 26, 2017, when Sexton flew from England to the US to spend a week with Von Asten in real life.

She told the Mirror that she was nervous about the meeting, but that the moment he said ‘Hey, sweetie’ at arrivals, she knew that ‘we found our missing piece. Everything connected. Once we’d spent that week together we knew we wanted to make a go of it.’

‘I fell in love with Kelly’s personality, warmth of her voice and the idea of her very, very quickly,’ Von Asten said, adding that although his family had met previous dates, ‘none of them were ever as well received as Kelly.’

Von Asten then flew to England in March 2018 to meet Sexton’s children in person, after seeing them on video and chatting with them. They ‘loved him,’ she said.

He then proposed to Sexton in April 2018, on Dover Beach, using an engagement ring that matched the one that he had given her in the online world.

Their actual wedding took place on December 30, 2019, in Wisconsin.

The couple is currently in England, awaiting coronavirus travel restrictions to be lifted so that Von Asten can go back to the US and wait for a spousal visa.

Now that they’re married in real life, Sexton says they aren’t indulging in Second Life, but that they are planning to check back into the virtual world down the line.

Sexton said that their relationship ‘feels like a fairytale’ and that ‘When I first saw him I felt like my soul had found its mate – my missing piece. It’s a perfect story with a perfect ending.’

Not all Second Life love stories end quite as neatly as Sexton and Von Asten’s did, however.

In 2008, a UK couple caused a stir when the wife filed for divorce over the husband’s unreasonable behavior’ after the wife caught his Second Life avatar having sex with another avatar. However, the woman that the husband had an online affair with, wound up getting engaged to him in real life.

In addition to helping people get carried away by romance, Second Life has helped many people make money, by allowing them to create virtual objects – often wardrobes – that can be purchased for in-game money that can be translated into real currency.

In 2015, it was estimated that Second Life users had cashed out about $60million while using the online platform.