A Florida police sergeant handcuffed an African-American doctor while he was unloading tents for the homeless from his van outside his own home.

The incident occurred on Friday and was caught on video by a security camera outside Dr. Armen Henderson’s home in Miami, Florida.

In the video, Henderson – who works for the University of Miami Health System – can be seen moving to and from his white cargo van, which is parked at the curb, with all of its doors open. After a few moments, a police cruiser pulls up to the van. 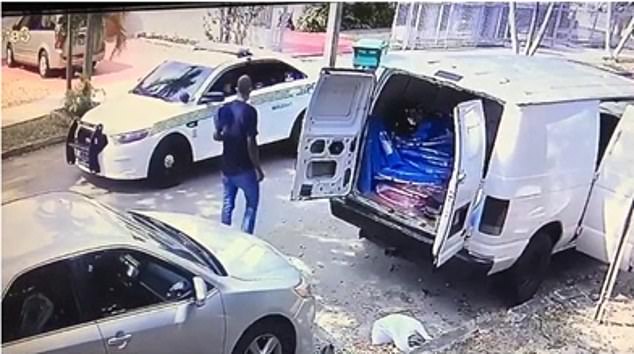 Security footage outside Dr. Armen Henderson’s home showed the moment that he was approached by police while he was unloading supplies from his van outside his home Friday 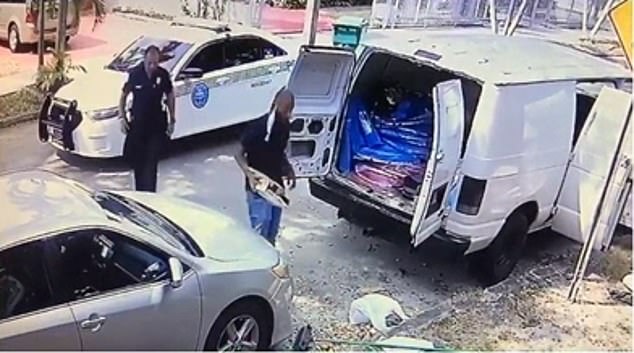 Henderson said the sergeant was patrolling the neighborhood following complaints about illegal dumping. The sergeant (left) is seen here following Henderson (right) back to the curb 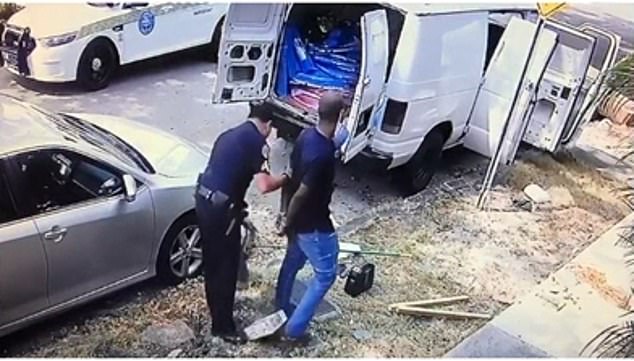 Henderson has a brief conversation with the sergeant in the vehicle, before turning away, at which point the sergeant exits the car. They have another discussion, after which Henderson, unhooking the mask from his ears, starts walking back to his home.

The sergeant and Henderson then have another conversation, which leads to the sergeant putting zip tie handcuffs on Henderson, who can be seen calling out to someone. The sergeant then leads Henderson back to his cruiser and tells him something, gesticulating in Henderson’s face as he placidly leans against the car.

As Henderson’s wife and the sergeant speak, Henderson can be seen picking up some gardening equipment and moving it towards the home.

Henderson told the Miami Herald that the sergeant had initially said he was patrolling the neighborhood because there had been complaints about people dumping garbage there. 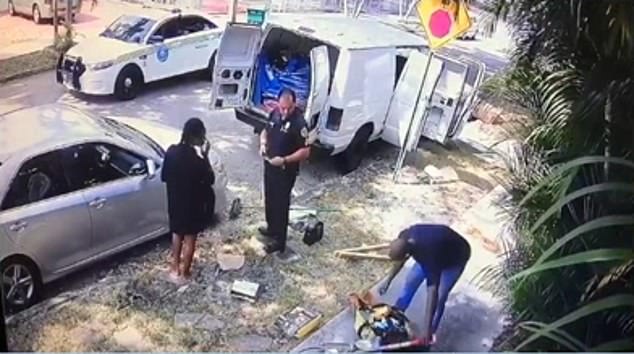 The sergeant is seen here after Henderson’s wife exited the home to show him ID. The sergeant released Henderon after speaking with his wife 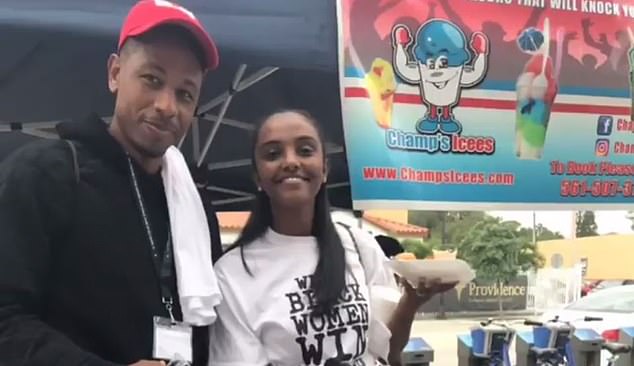 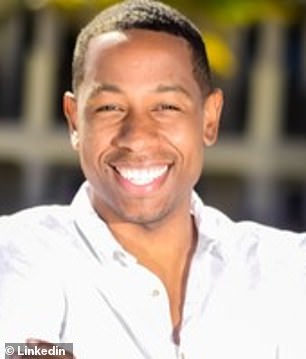 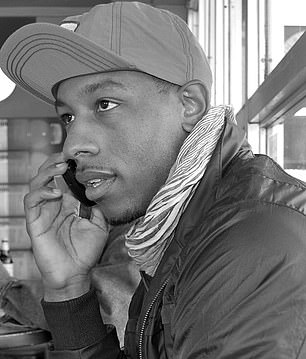 Henderson said that the sergeant told him ‘you should refer to me as sir, or sergeant when talking to me.’

Henderson also said that he did not tell the sergeant that he was a doctor and that he didn’t swear at him either. ‘He just grabbed my arms and cuffed me,’ he said.

Henderson, a father of a two young children, told Local 10 that he had been unloading tents from the van, ahead of taking them to the homeless population in Downtown Miami that day.

He said that he was in a hurry to get the van unloaded so that he could be downtown before noon. 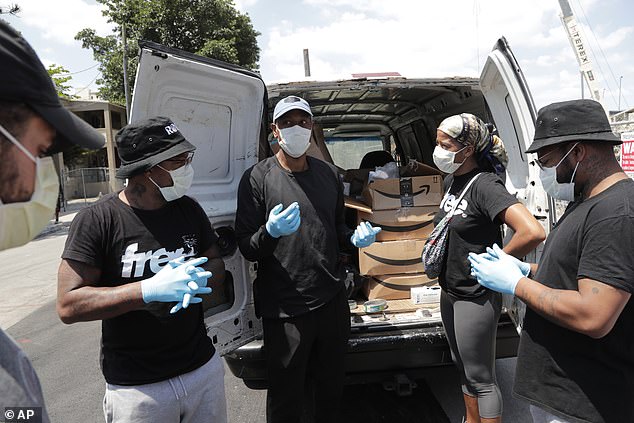 Henderson (center) recently grabbed headlines, along with other volunteers, for their work in testing Miami’s homeless population for coronavirus and giving them necessary supplies 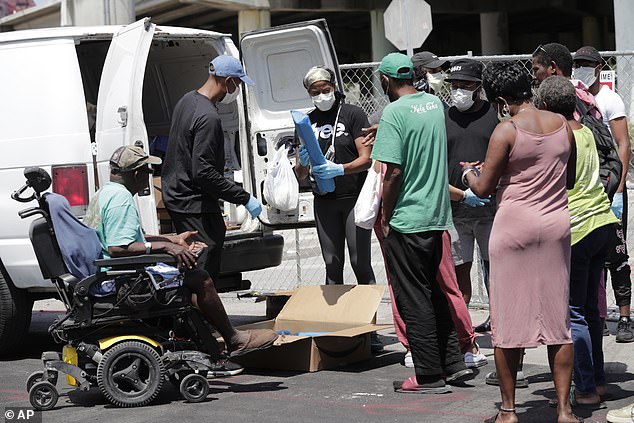 Henderson (second from left) is seen here standing next to his van, handing out supplies 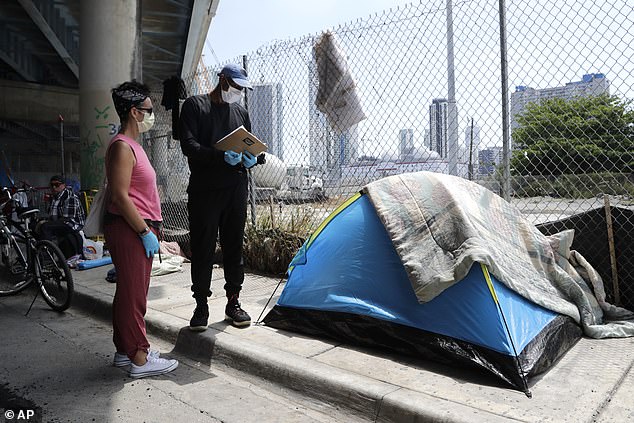 Henderson, who had been wearing a mask during the confrontation, questioned why the sergeant was so quick to stop him and why he wasn’t wearing a mask while he did it.

Especially during the pandemic, Henderson told the news station, ‘You should keep your distance between people, especially and limit your interactions. I was taking tents out of my car, why was that even a reason to stop and talk to me?

‘It is because of those reasons the number of cases were going up. Why was he so ready to approach me without a mask on regardless or not if I was littering?’ he added.

Since video of the incident went public, Miami Police has revealed that they will be conducting an internal investigation into what happened.

Miami Police Chief Jorge Colina said in a video posted to social media Saturday that his agency doesn’t condone or accept profiling of any kind.

Colina said that the context of the sergeant’s stop was that police had received a ‘litany of complaints’ about illegal dumping in the neighborhood.

‘There is a cargo van that is parked in front of that home. It appears to be trash that is being off-loaded,’ Colina said. ‘That is the genesis of the stop. What happens after that, what’s being discussed, the actions taken, etc., all that needs to be investigated. And it will be investigated.’

Henderson made headlines on March 28 after he and other volunteers were profiled for their work on testing Downtown Miami’s homeless community for coronavirus and providing them with hand sanitizer, tents, food and other amenities.

‘These people are the most vulnerable,’ Henderson told the Miami Herald about why testing the homeless for coronavirus was so important. ‘They’re also at highest risk for getting the virus and for spreading it.’