Damo Uncle wanted to be a BBC journalist. The middle-aged Chinese blogger said he would follow the “principle of results before evidence,” keep his camera on a suspicious angle, focus on the disorder of traffic jams and piles of rubbish and, when required, confront security guards to provoke a response.

Damo’s parody job application videos have been viewed more than 20 million times across blogging platform Sina Weibo and China’s domestic version of TikTok, Douyin. In isolation they could be taken as a tongue-in-cheek take down of journalistic tropes, but they are part of a much larger and increasingly powerful ecosystem of Chinese government propaganda that demonises foreign reporting as biased, racist and stereotyped. 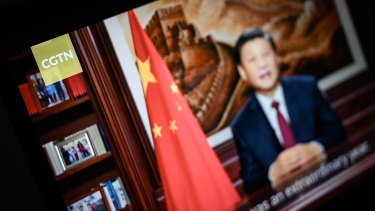 CGTN has been banned in the UK by the television regulator. Credit:Getty

Occasionally badged under the #Mediaunlocked hashtag, China has unleashed a torrent of videos, photos and articles accusing foreign journalists of fabricating grey skies, media companies of being proxies for foreign intelligence services, and manufacturing suppression in Xinjiang, where up to 1 million Uighurs have been detained.

“There’s clear temporal and narrative alignment across diplomatic and state media messaging as well as among pro-CCP [Chinese Communist Party] influencers and patriotic Twitter accounts,” said Australian Strategic Policy Institute researchers Albert Zhang and Jacob Wallis, who have reported a sharp rise in Chinese online attacks on the BBC since the start of this year.

“From which we can infer a level of coordination and a willingness to target international audiences.”

China’s escalating responses to what it sees as unjustified attacks on its policies have grown sharper as incomes, nationalism and international scrutiny have grown.

Cartoons lampoon foreign reporters as Inspector Gadget-style conspirators, state media outlets return to sites of alleged human rights abuse to run vision of happy kindergarten children playing with their parents, and the funding of critical think tanks and researchers, including the Australian Strategic Policy Institute (ASPI), are dissected in an attempt to discredit them and their western government sources.

“In the past, members of the Chinese public were not used to, or could not, communicate smoothly with the world,” Ji Zhiye, a member of the Chinese People’s Political Consultative Conference told state media outlet China Daily after the National People’s Congress on Thursday.

“As they enjoy better living standards and become more confident, they now have the time and capability to express their disappointment over inaccurate information about China and openly discuss it.”

China’s tactics are two-fold. It is simultaneously raising doubts about the limited independent coverage of its government, while expelling, restricting or undermining the few journalists left to give a picture of its intentions.

The Foreign Correspondents Club of China said 2020 saw the largest expulsion of foreign journalists since the aftermath of the Tiananmen Square massacre more than three decades ago. At least 18 journalists, including Australian reporters Bill Birtles from the ABC and Mike Smith, from The Australian Financial Review, were forced to leave, hurried out as their visas were cancelled or over national security concerns.

“For the third consecutive year, not a single correspondent said working conditions improved,” the FCCC’s report on media freedom found.

Alice Su, The Los Angeles Times correspondent, reported having to “take three COVID tests over five days” as she attempted to report from Xinjiang, where Chinese state media has routinely claimed the Muslim-minority Uighurs are prospering, not being detained.

“They obstructed us and said we had to take a test, even though we’d just gotten tested 30 minutes earlier at the train station,” she said.

Others have been subject to trial by visa. The Globe and Mail’s Nathan VanderKlippe received seven consecutive one-month visas, followed by a three-month visa.

In Xinjiang, he too was followed from airports on arrival. “Shoved and grabbed by people who refused to identify themselves” and “placed under such close surveillance that interviews were impossible”.

Asked about the findings of the FCCC report, China’s Ministry of Foreign Affairs spokesman Wang Wenbin said the Chinese government “had never acknowledged the organisation”.

“We welcome media from different countries working in China,” he said. “And will continue to provide them with convenience and assistance.”

Steven Lee Myers, the expelled Beijing bureau chief for The New York Times, told the FCCC that despite what China says about wanting to be open to the world and to show everybody what a vibrant society it is, “they clearly restrict reporting of anything that doesn’t adhere to their vision”.

“It’s suggestive of a climate that’s not going to get any better,” he said.

The breakdown in two-way communication via the media is rapidly narrowing the space for dialogue at a time when political tensions between China and the West are at their highest point in decades. Chinese international state TV network CGTN is now banned in Britain after it aired forced confessions of political prisoners. Its broadcasts have also been restricted on SBS in Australia. In retaliation, the BBC was banned from the limited number of hotels it was allowed to broadcast into China after it aired a report on allegations of rape, sterilisation and torture in Xinjiang.

Those disputes came to a head on Wednesday when Britain’s ambassador to China, Caroline Wilson, was summoned by Chinese authorities for her “ideological prejudice” after she wrote an opinion piece that defended the work of reporters. The piece was blocked from being shared by China’s censors.

“Foreign media criticising the Chinese authorities does not mean that they do not like China,” she wrote in mandarin.

Wilson quoted the motto of the French newspaper Le Figaro: “If criticism is not free, praise is meaningless”.

Start the day with major stories, exclusive coverage and expert opinion from our leading business journalists delivered to your inbox. Sign up here.