A man has been arrested after a suspicious fire at an East Melbourne building housing the practice of a prominent solicitor who has acted for a number of underworld figures including drugs baron Tony Mokbel.

Police and firefighters were called to the Lansdowne Street property near Victoria Parade about 2.40am on Sunday after reports of a fire, with rubbish alight near a doorway and under the balcony. 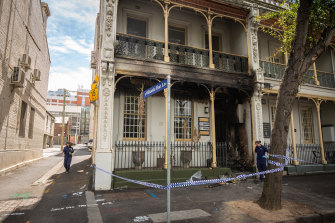 Damage at the Lansdowne Street property after the fire on Sunday.Credit:Scott McNaughton

The terrace house, home to the legal practice of Stephen Andrianakis, "suffered moderate damage" in the fire, according to a Victoria Police spokeswoman.

No one was injured and police are still investigating the circumstances around the blaze.

Mr Andrianakis has repeatedly acted as Mokbel's solicitor, including throughout his Court of Appeal hearing challenging a 30-year prison term for drug trafficking in 2013.

The prominent solicitor was also involved in the trial of John Higgs, who was jailed for 18 years in 2013 for his role in the failed importation of 15 million ecstasy tablets hidden in tomato cans – the world's largest ecstasy haul at the time, with a street value of $122 million.

And Mr Andrianakis was involved in a successful bid for bail by Ali El Nasher in the Court of Appeal in June this year. Mr El Nasher allegedly stomped on the head of someone during a fatal shootout at a boxing match in Kensington last year. He is on bail after being charged with attempted murder.

A 47-year-old Coburg man was arrested on Sunday and was assisting police with their inquiries into the fire. No one has been charged in relation to the blaze.

When contacted by The Age on Sunday, Mr Andrianakis said he would not comment on the circumstances of the fire, as the police investigation was ongoing.

The partially burnt building also contains travel agency SEtravel and Mediserve Nursing Agency. The Melbourne offices of both organisations could not be contacted before deadline.

Detectives and the police arson squad visited the scene as part of their investigation on Sunday.

A spokeswoman for Fire Rescue Victoria said: "Crews arrived on scene in less than five minutes and quickly extinguished a fire that had taken hold of rubbish near a door and under a balcony. Firefighters remained on scene checking for any potential fire spread and to ensure the fire was fully extinguished, before handing the scene to Victoria Police."