Airport rules take flight: Security limits on cabin bag liquids and the demand for passengers to remove laptops from bags will be axed by next summer

The ban on air passengers carrying more than 100ml of liquids in their hand luggage will be lifted at most major UK airports by June 2024, ministers announced last night.

Travellers will also no longer have to remove items such as drinks, creams and make-up and put them in clear plastic bags when going through security.

The new limit for liquids will be two litres.

Under the biggest shake-up of aviation security in decades, laptops and tablets will also no longer need to be removed from hand luggage. 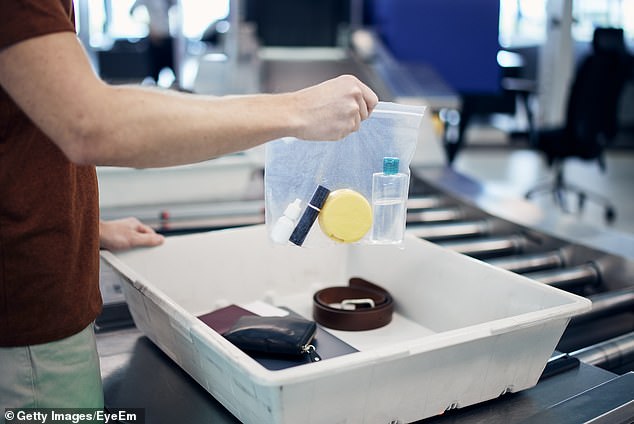 Pictured: Man putting items in clear plastic bag at airport (file photo). The ban on air passengers carrying more than 100ml of liquids in their hand luggage will be lifted at most major UK airports by June 2024, ministers announced last night

It will drastically speed up the time it takes for passengers to pass through security.

CT scanners to be installed at most major airports, such as Heathrow, Gatwick and Manchester, will use X-ray technology to provide a 3D image of what’s in bags.

They will allow security staff to inspect a bag from every angle, giving security staff a more detailed image of what people are carrying. Most current machines only produce a 2D image.

Similar technology is already in place in the US and at airports such as Amsterdam’s Schiphol.

Ministers will today introduce legislation allowing the changes, which will also drastically reduce the need for plastic at airports. It will require most major airports to install the technology by June 2024.

The biggest cause of delays at security is passengers failing to remove items from their bags or travelling with large bottles of liquids and creams.

‘Of course, this won’t happen straight away – this is going to take two years to be fully implemented.

‘Until then, passengers must continue following the existing rules and check before travelling.’ 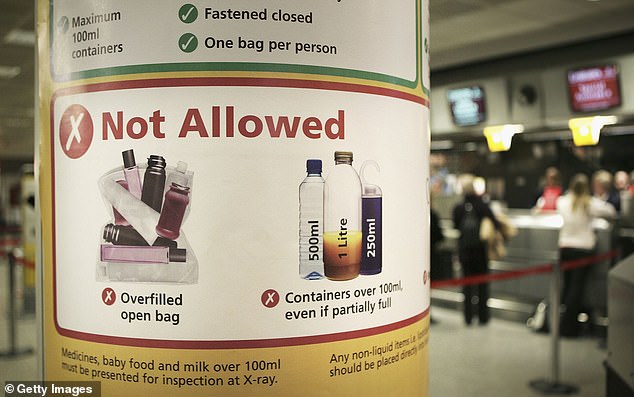 Pictured: Sign at airport (file photo). Travellers will also no longer have to remove items such as drinks, creams and make-up and put them in clear plastic bags when going through security

The 100ml rule was introduced 16 years ago after a foiled Islamist terrorist plot in 2006. Extremists planned to bring down seven flights leaving Heathrow using liquid explosives disguised as soft drinks.

It would have been al-Qaeda’s biggest attack in the West since 9/11.

The new technology has already been tested at Gatwick and Heathrow. Former prime minister Boris Johnson announced the trial in 2019, but the Covid-19 pandemic has delayed its roll-out.

It was introduced at Shannon airport in Ireland this year, with the 100ml rule scrapped. The airport said passenger processing times have been halved.

However, there are fears that passengers could face mixed messages if it is brought in at some airports before June 2024 and not at others.

Christopher Snelling, of industry body the Airport Operators Association, said: ‘This investment in next-generation security… will provide a great step forward for UK air travel, matching the best in class around the world. It will make the journey through the UK’s airports easier and air travel itself more pleasant.’