Lifting lockdown! Fitness fans hit gyms across the country for the first time in months as Covid rules are finally eased

Fitness fans were back in gyms across England today for the first time in months after coronavirus restrictions were eased.

Hundreds donned their lycra and made their way to their local clubs in the early hours to get in a training session before the start of the working day.

Swimming pools, tennis courts and weight training areas were all back in use while group classes remain on hold.

As of April 12, people can use indoor fitness facilities, including indoor pools, alone or within a household group.

Steam rooms and saunas will not be allowed to open until step three, which can start no earlier than May 17. 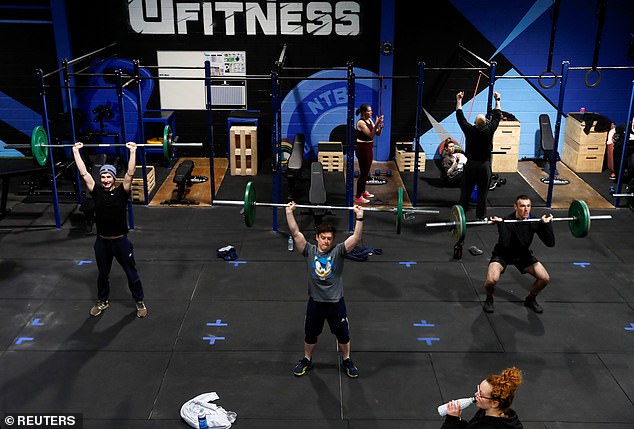 Hundreds of fitness fans have donned their lycra and returned to their local gyms across England in the early hours to get in a training session on the first day of restriction easing. Pictured: Ultimate Fitness Gym in Wallsend 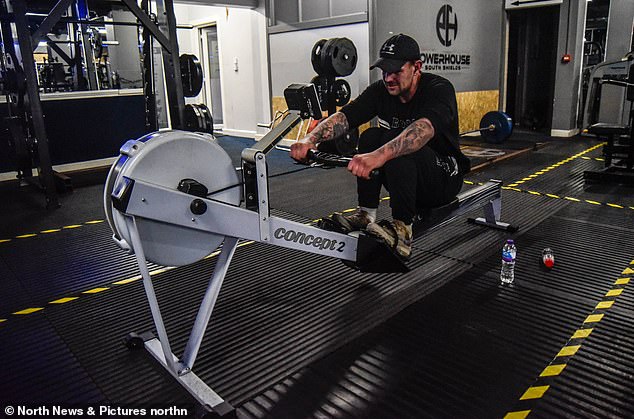 Gym goers were back whirring away on rowing machines and treadmills at Powerhouse gym in South Shields, South Tyneside as early as 6am 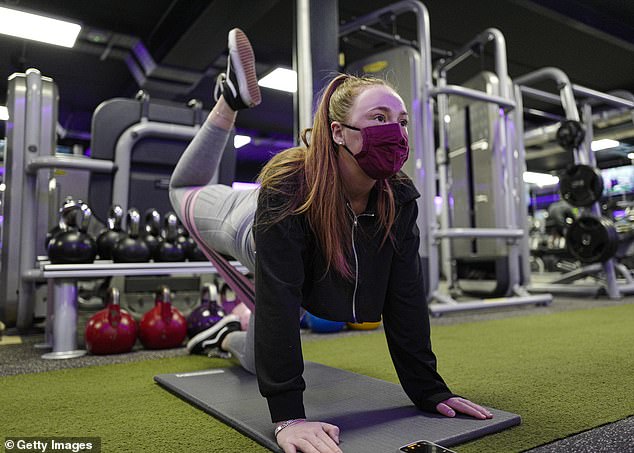 Francesca Williams, 20, meanwhile put in some stretches before getting on with her routine at the St Michael’s Health Club shortly after they opened at 6am in Falmouth, Cornwall

Socially-distanced gym goers were pumping iron as early as 6am at the Powerhouse gym in South Shields, Tyneside.

Francesca Williams, 20, meanwhile put in some stretches before getting on with her routine at the St Michael’s Health Club shortly after they opened at 6am in Falmouth, Cornwall.

And Robyn Delany, seven, and Greyson Delany, 10, were seen splashing about in the pool at David Lloyd Cambridge as the gym group re-opened all 88 of its clubs in England.

Health industry bosses say the decision to allow gyms and other indoor leisure facilities to reopen at the earliest possible opportunity underlines the role they play in the physical and mental health of the nation.

Huw Edwards, chief executive of trade organisation ukactive, said: ‘Gyms, pools and leisure centres have proven safety measures in place and they are looking forward to welcoming back members and visitors from Monday, bringing a long-awaited boost to communities across the country. 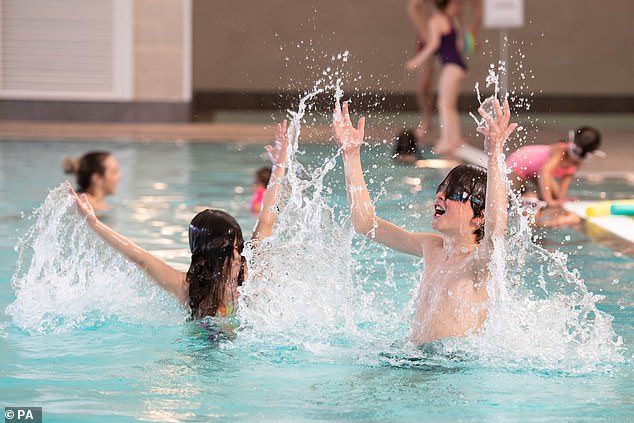 Robyn Delany, seven, and Greyson Delany, 10, were seen splashing about in the pool at David Lloyd Cambridge as the gym group re-opened all 88 of its clubs in England 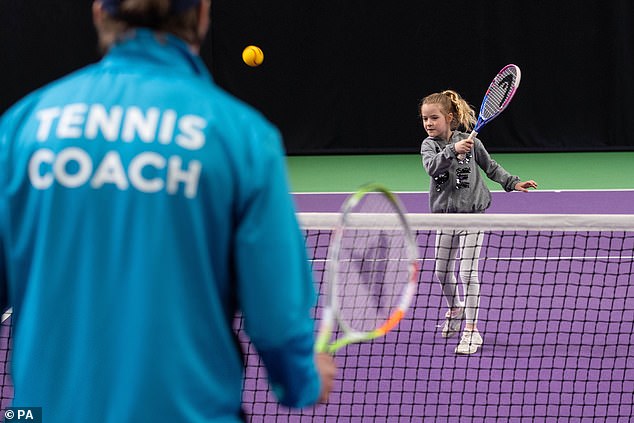 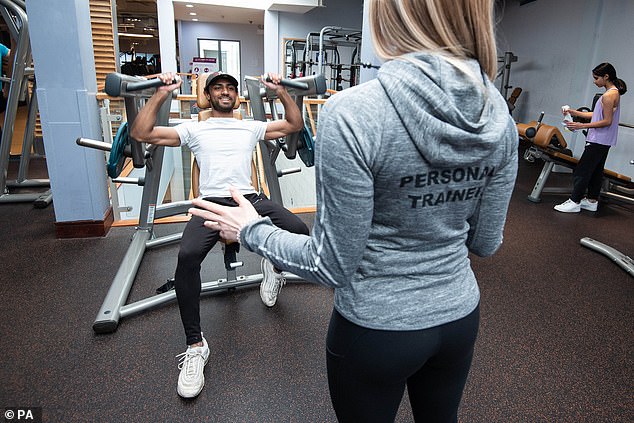 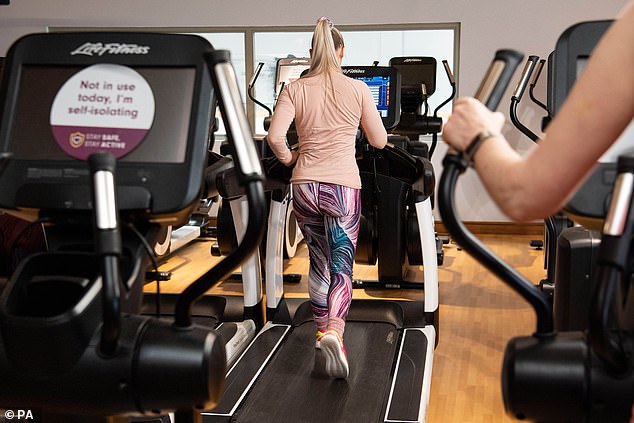 ‘The decision to reopen fitness and leisure facilities in the earliest stage possible for indoor venues underlines the role they play in our nation’s social fabric and in supporting the NHS, providing an essential service for the mental and physical health of millions.’

There are some 7,200 fitness and leisure facilities across the UK, serving 17 million users and employing 189,000 people.

Ukactive estimates there have been 700 million lost visits to facilities since the first lockdown on March 23 last year.

A survey by Leisure-net of 33,000 gym members found 69 per cent were ‘extremely confident’ in the safety measures after returning to their centre or club after the first lockdown and 90 per cent said they would use their club more or the same when it reopens, up from 88 per cent last June.

More than three quarters (76 per cent) said they intended to return to their club immediately.

Ukactive said data from 2,000 operators suggested the prevalence of the virus among visitors who had used facilities remained ‘extremely low’, at an overall rate of 1.7 cases per 100,000 visits, measured from 75 million visits across the UK between July 25 to December 27.

Polling by ukactive and ComRes suggested 42 per cent of UK adults were sitting for at least 14 hours longer per week during lockdown. 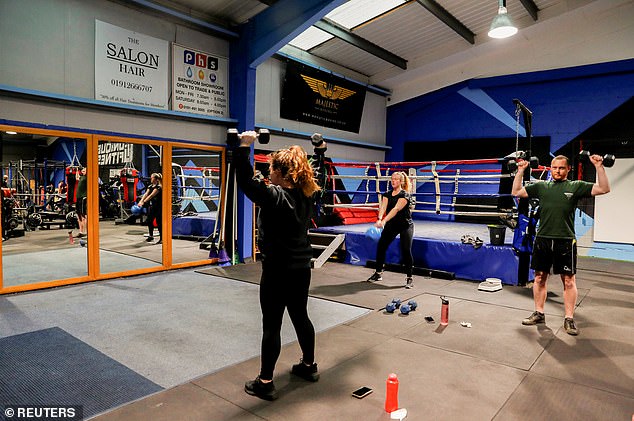 Ukactive estimates there have been 700 million lost visits to facilities since the first lockdown on March 23 last year. Pictured: Strength and conditioning class at Ultimate Fitness Gym in Wallsend, Tyneside 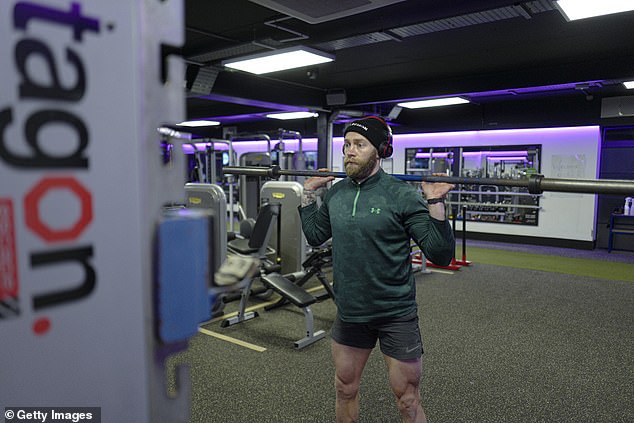 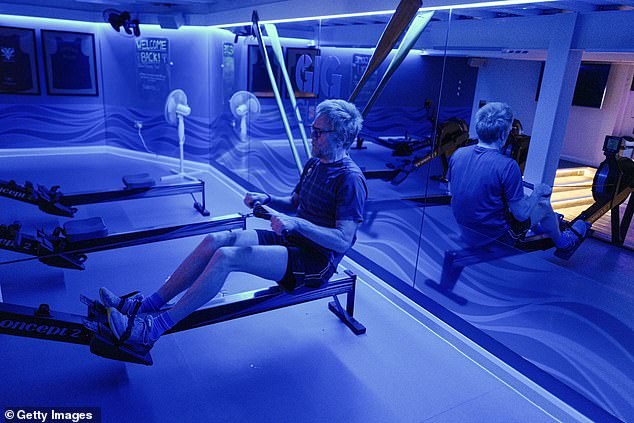 A survey by ukactive of its members showed approximately 400 facilities had already been lost during the crisis, while lockdown had resulted in £90 million in lost membership fees each week 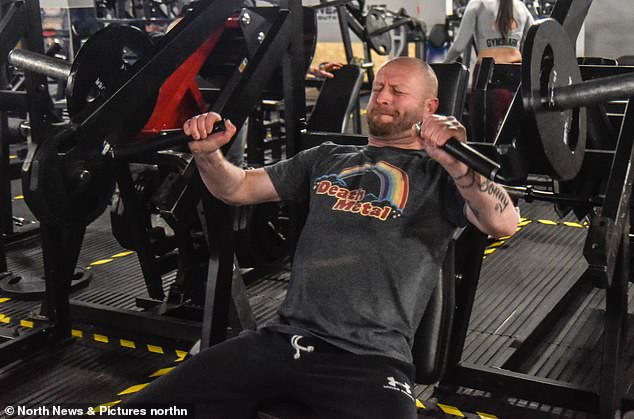 A survey by ukactive of its members showed approximately 400 facilities had already been lost during the crisis, while lockdown had resulted in £90 million in lost membership fees each week.

January is normally a key period for new joiners and renewals and usually sees 30 per cent growth.

Rebecca Passmore, UK managing director of PureGym, which is opening 10 new facilities in England alongside the reopening of its 230 sites, said: ‘After 14 weeks of closure we are absolutely thrilled to be opening up our gyms in England on Monday and expect approaching one million workouts over the course of next week.

‘The lockdown has been incredibly tough both for our members and the 3,100-strong PureGym team.

‘We know how much our members have missed the gym these past few months and I know I speak for the whole team in saying we are so excited to be welcoming them back.

‘For millions of people going to the gym is an essential part of their daily health and wellbeing routine, and we are committed to ensuring it is a safe and enjoyable experience, enabling people to be fitter, healthier and happier.’

Boris Johnson yesterday urged the nation to ‘behave responsibly’ following the major easing of restrictions, giving special notice to those returning to pub gardens and restaurants for outdoor dining.

Shops deemed non-essential will also reopen on Monday, as will hairdressers, indoor gyms, swimming pools, nail salons and zoos in another stride back towards normality.

However, social mixing indoors will remain heavily restricted, with around two in five adults yet to receive their first dose of a Covid-19 vaccine and the vast majority yet to get both.

The Prime Minister urged caution during the ‘major step forward’ as a scientist advising the Government warned the rules must be followed to minimise a possible rebound in case numbers.

‘I’m sure it will be a huge relief for those business owners who have been closed for so long, and for everyone else it’s a chance to get back to doing some of the things we love and have missed,’ Mr Johnson said.

‘I urge everyone to continue to behave responsibly and remember ‘hands, face, space and fresh air’ to suppress Covid as we push on with our vaccination programme.’

What can you do from today? (And what do we still have to wait for?)

Until May 17 at the earliest: Gatherings of up to 30 people outdoors, with the rule of six and two-household rule indoors; pubs and restaurants will reopen indoors; and controlled indoor events of up to 1,000 people or 50 per cent of a venue’s capacity, whichever is lower, will be permitted.

Up to 30 people will be allowed to attend weddings, receptions, funerals, and commemorative events, including wakes.

Indoor gatherings like exercise classes will be given the go ahead, and steam rooms and saunas will be allowed to reopen.

Until June 21 at the earliest: All legal limits on social contact will be lifted and nightclubs reopened.