Lebanon’s prime minister and three ex ministers have been charged with negligence over the catastrophic Beirut port explosion that left more than 200 dead.

A judicial source confirmed the charges against outgoing premier Hassan Diab on Thursday.

They are the first politicians to be indicted over the devastating August 4 blast that killed more than 200 people, disfigured the heart of the capital and stoked a wave of already-intense public anger against Lebanon’s ruling elite.

The four were charged with ‘negligence and causing death to hundreds and injuries to thousands more’ in the first such official indictment against a sitting prime minister in Lebanese history, the judicial source said. 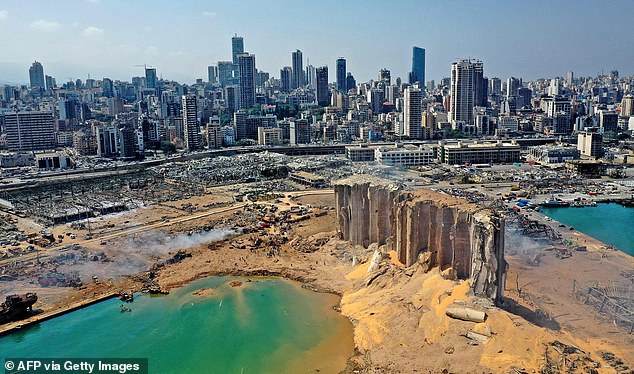 Lebanon’s prime minister and three ex ministers have been charged with negligence over the catastrophic Beirut port explosion that left more than 200 dead. Pictured: An aerial shot shows the massive damage at Beirut’s port following the blast [File photo] 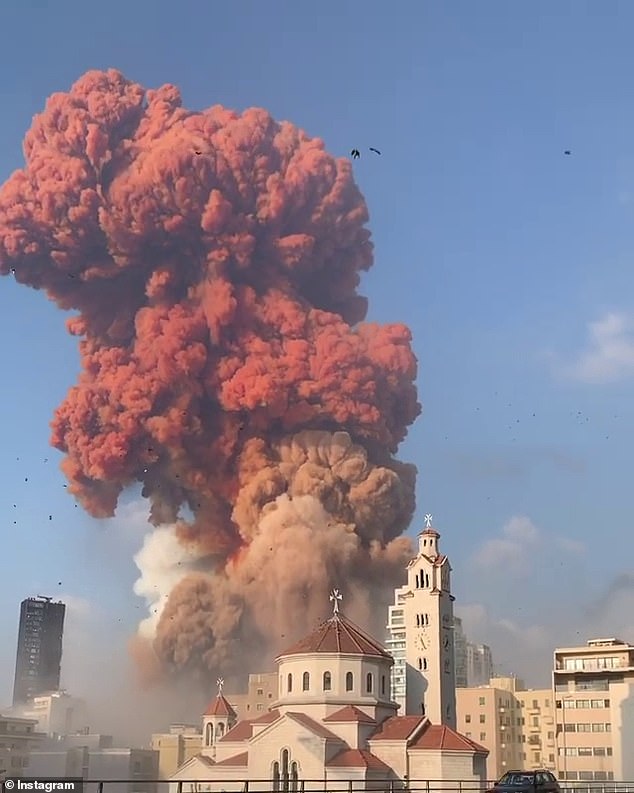 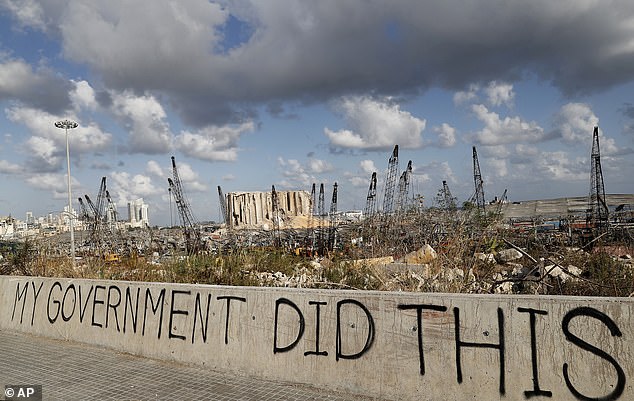 The blast stoked already-high levels of mistrust in the Lebanese government among both the international community and residents, who had already been protesting for months over corruption, a crippling economic crisis and the country’s post-civil war power sharing agreement. Pictured: Graffiti at Beirut’s port blames the government for the explosion [File photo]

After the blast, it emerged that top security officials and politicians had known for years about the hundreds of tonnes of ammonium nitrate fertiliser stored haphazardly at the Beirut port but had failed to take precautionary measures.

Thursday’s decision by judge Fadi Sawan came after an investigation confirmed the suspects had received ‘several written notices warning them against postponing the disposal of ammonium nitrate fertiliser,’ the source said.

‘They also did not take the necessary measures to avoid the devastating explosion and its enormous damage,’ added the source, who spoke to AFP news agency on condition of anonymity because he is not authorised to comment on the issue. 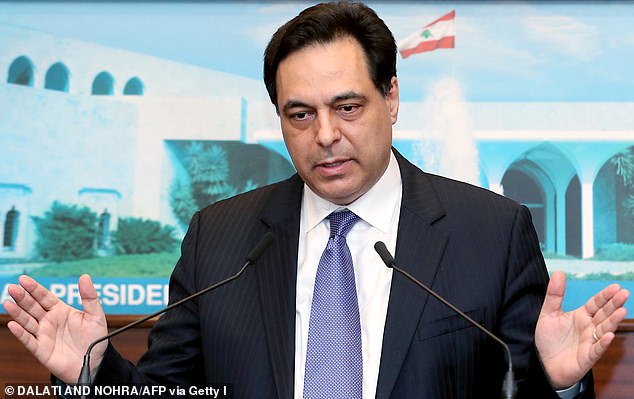 Outgoing Prime Minister Hassan Diab has been charged with negligence over the explosion in a first for a sitting Lebanese prime minister. He took office after his predecessor Saad Hariri resigned amid mass protests in October 2019. After the explosion, Diab stood down. He denies any wrongdoing [File photo] 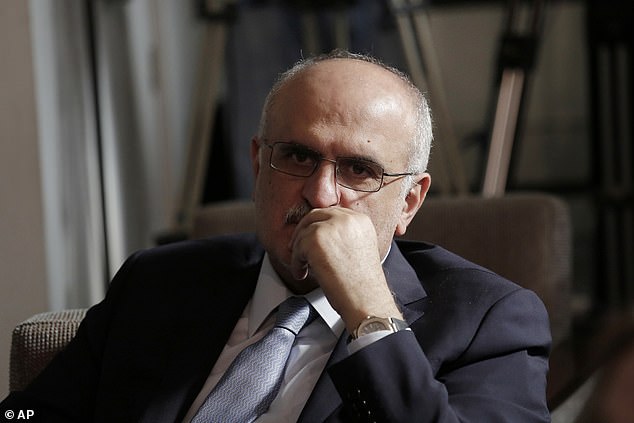 ‘He is confident that his hands are clean and that he has handled the Beirut Port blast file in a responsible and transparent manner,’ it said in a statement.

‘This surprising targeting goes beyond the person to the position per se, and Hassan Diab will not allow the Premiership to be targeted by any party.’

Hezbollah’s political wing has seats in the Lebanese parliament, but the group as a whole is listed as a terrorist organisation by many foreign powers including the US and European Union. 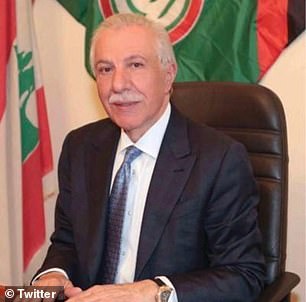 In a letter to parliament late last month, judge Sawan asked lawmakers to investigate several outgoing and former ministers over the explosion. These included Khalil, Fenianos and Zaiter.

The letter came after Sawan’s own investigations raised ‘certain suspicions about the responsibility of those ministers and their failure towards addressing the presence of the ammonium nitrate at the port’.

The judicial source on Thursday said parliament had not responded to Sawan’s request, prompting him to press charges unilaterally.

Sawan will begin questioning the suspects from Monday, the source said.

The investigation has so far triggered the arrest of 25 people, including top port and customs officials.

Lebanon has rejected an international probe, despite demands both at home and abroad for an impartial investigation.

However experts from France and the US Federal Bureau of Investigation took part in the preliminary investigation. 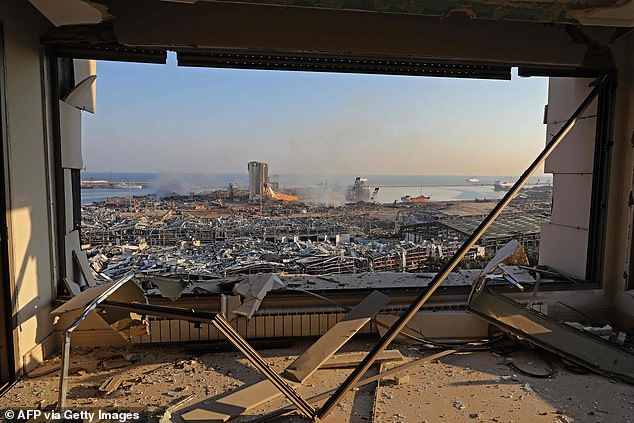 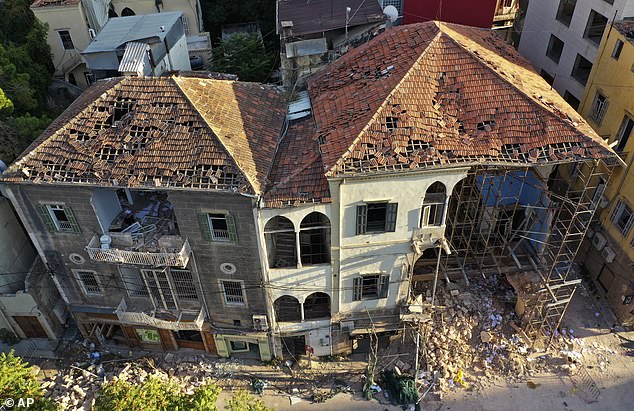 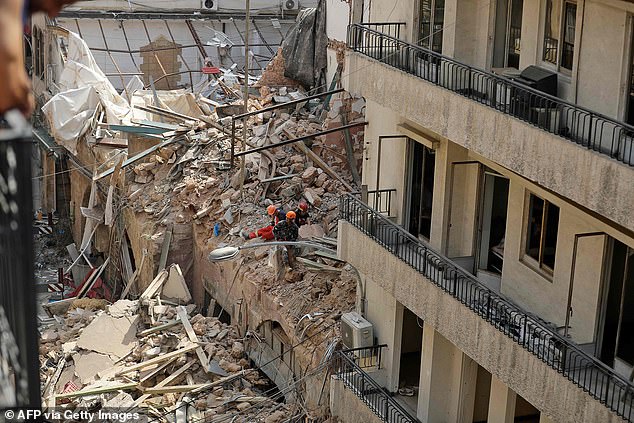 Homes and businesses were among the buildings wrecked by the blast, creating a huge surge in homelessness amid the coronavirus pandemic [File photo]

Public anger has simmered over the pace of investigation, which had until today had spared top political officials widely accused for the country’s worst peace-time disaster.

Many blame the blast on decades of negligence and corruption by the country’s ruling elite, which includes former warlords from Lebanon’s 1975-1990 civil war.

It came as Lebanon struggled with the effects of the coronavirus pandemic amid a punishing recession which had sparked huge anti-government protests that led to the resignation of prime minister Saad Hariri in October 2019.

The Beirut Bar Association has handed the public prosecutor hundreds of criminal complaints from victims of the explosion. 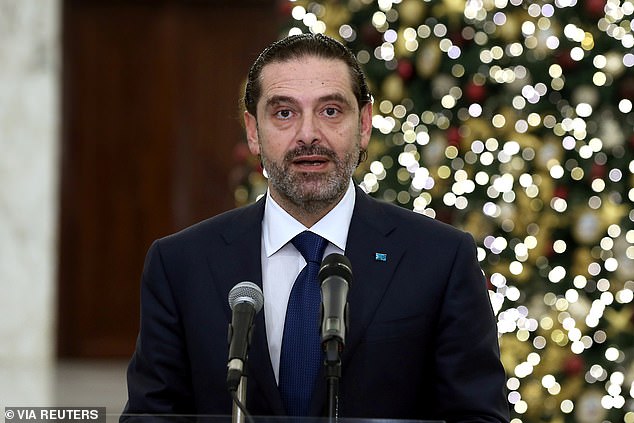 Saad Hariri, the former Lebanese prime minister who resigned last year amid massive anti-government protests, is due to make a comeback after being tasked in September with forming a government to prevent the country’s collapse.

On July 20, Diab and President Michel Aoun had both received a report from the State Security agency warning of the danger posed by storing the highly unstable ammonium nitrate fertiliser at the port.

After the explosion, the agency confirmed it had alerted authorities in a detailed report quoting a chemical expert who had visited the warehouse.

If ignited, the ammonium nitrate would cause a huge explosion that would be especially destructive to the port, warned the report seen by AFP.

Diab, who had testified before Sawan in September, resigned in the wake of the August 4 explosion.

Hariri is set to make a comeback after being tasked with forming a government to prevent the country’s collapse.

He said he had submitted a cabinet lineup of 18 ministers to the president on Wednesday, but no signs have emerged that a new cabinet is imminent.