Kanye goes on strike: Star says no more music till his contract ends as he launches into another rant calling himself the ‘new Moses’ and demands an APOLOGY from Drake

Kanye West has stated he is ‘not putting no more music out till I’m done with my contract with Sony and Universal’ at the start of a Twitter rant on Monday night.

‘I’m not putting no more music out till I’m done with my contract with Sony and Universal … On God … in Jesus name … come and get me,’ he wrote.

‘I need to see everybody’s contracts at Universal and Sony I’m not gonna watch my people be enslaved I’m putting my life on the line for my people The music industry and the NBA are modern day slave ships I’m the new Moses,’ West added. 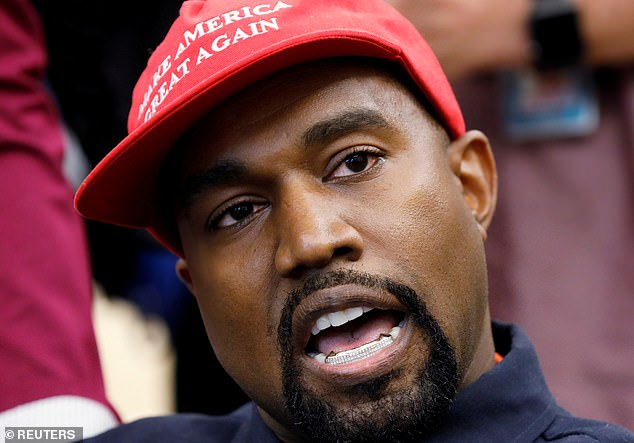 Less than an hour later, West declared himself to be the ‘new Moses’ and proclaimed the music industry to be ‘modern day slave ships’ 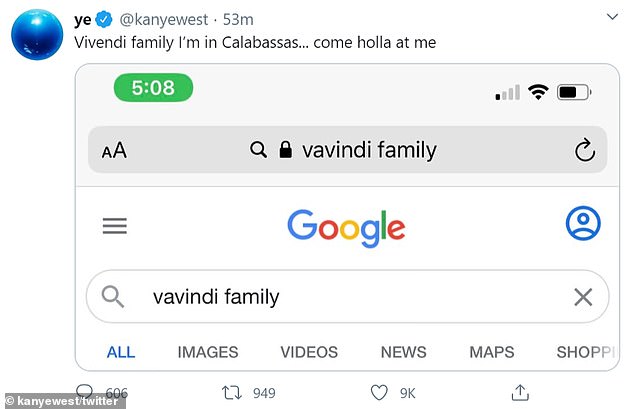 The Vivendi family are the French conglomerate that owns the Universal music that includes West’s GOOD label, Roc-A-Fella and Def Jam on which his music was released 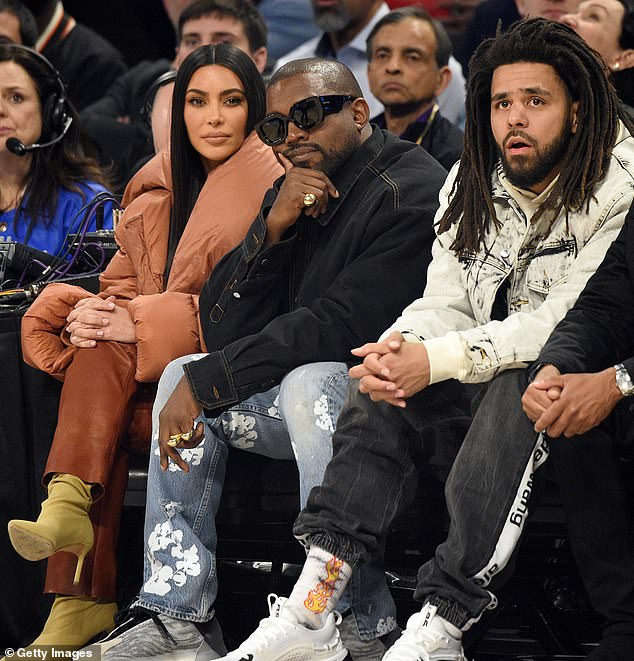 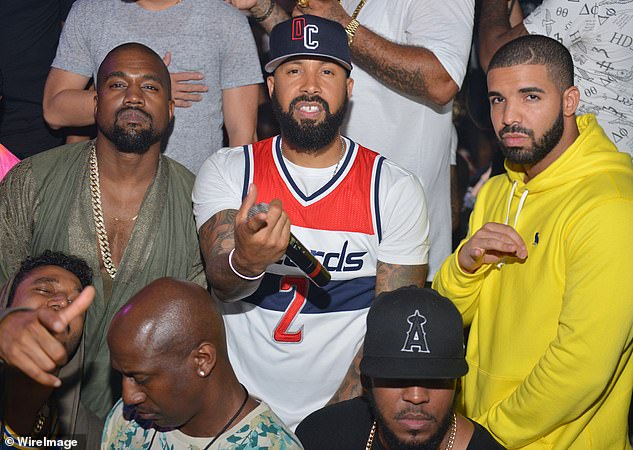 Kanye West, Kenny Burns and Drake, far right, are pictured together in June 2015

‘Vivendi family I’m in Calabassas,’ he then went on to tweet. The Vivendi family are the French conglomerate that owns the Universal music that includes West’s GOOD label, Roc-A-Fella and Def Jam on which his music was released.

‘I need a [public] apology from J Cole and Drake to start with immediately,’ he then wrote in another tweet, adding, ‘I’m Nat Turner … I’m fighting for us.’

West has feuded with both J. Cole and Drake in the past, while Nat Turner is an  American slave who led a Virginia rebellion for freedom in 1831.

As the Twitter rant continued, West wrote: ‘I’m the 2nd richest black man in America,’ followed by ‘I need all my people with me for us to get free,’ however that tweet was later deleted.

‘I deleted that tweet about riches… the wealth is in our love of family and our brothers and our service to God … let’s rise up… let’s communicate,’ West explained. 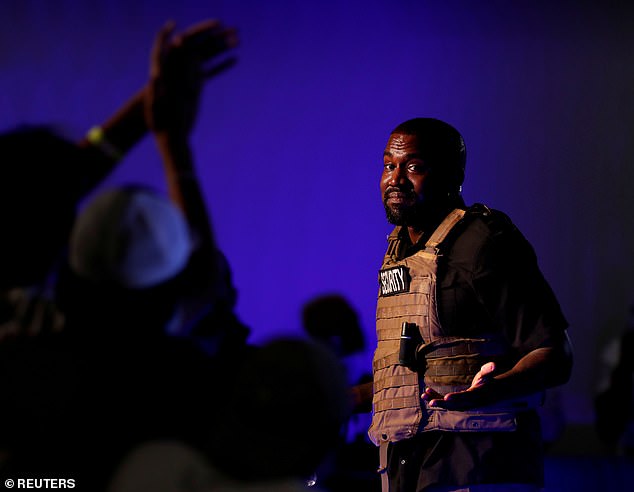 West demanded an apology with artists J Cole and Drake with whom he has feuded with in the past. He stated that he was ‘Nat Turner’, an American slave who led a Virginia rebellion for freedom in 1831

‘Let’s stop killing each other … let’s show God that we are Gods people … my ego gets the best of me too… God doesn’t measure us by money in his kingdom … let’s love each other… I love my brothers and I miss my friends … real talk,’ West continued.

‘I’m not industry bro … I don’t care… I’m in service to Christ … we need world healing … I miss my brothers… I refuse to argue with black men on labels we don’t own… even twitter’, West said in another jumbled tweet.

West then went on to discuss other concerns and pleaded for unity among his peers.

‘No more dissing each other on labels we don’t own,’ he requested.

Forbes calculates Kanye West’s net worth to be at $1.3 billion, although this tweet was later deleted 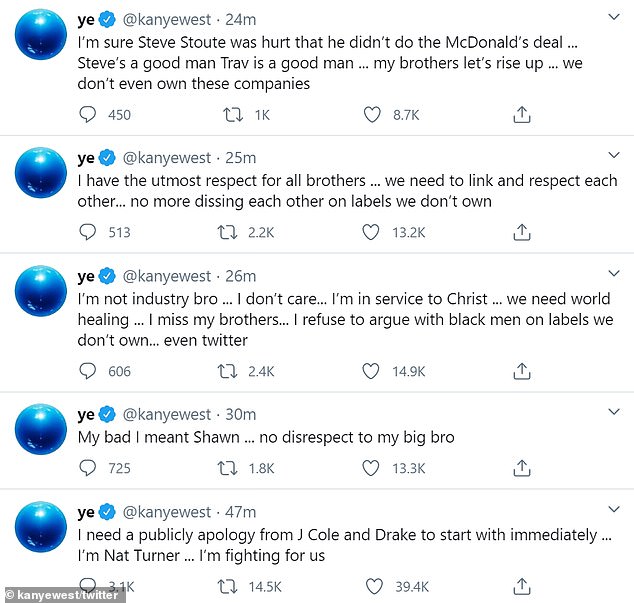 West’s issues with Stoute — apart from McDonald’s deals — became clearer when he tweeted an image of a headline in which the music exec said, ‘I don’t want anybody Black running around voting for Kanye West. West further invoked God and alluded to his disputes with fellow black titans in the music industry

West ended up suing Sony/ATV-owned EMI Music Publishing, Universal Music Group, Roc-A-Fella and Def Jam in January 2019 as he tried to get out of his contract.

The suit was ultimately settled for an undisclosed amount in October.

West then went on to share a screenshot of a post from Instagram account @balleralert, featuring a conversation between NBA star Kevin Durant and businessman Steve Stoute in which they discourage Black Americans from voting for the rapper in this year’s general election.

‘Steve Stoute is a good man … this is my brother … I’m disappointed with a lot of his recent decisions but Steve is my brother… I understand bro,and I’m here for life,’ West tweeted.

West’s issues with Steve Stoute became clearer when he tweeted an image of a headline in which the music exec said, ‘I don’t want anybody black running around voting for Kanye West.’ 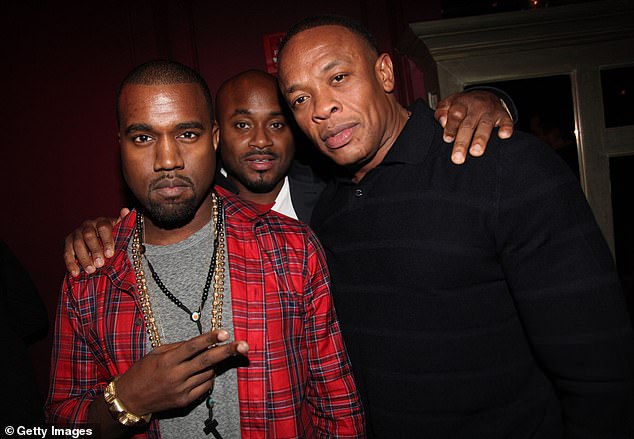 Kanye West, Steve Stoute and Dr. Dre are pictured together here in 2011 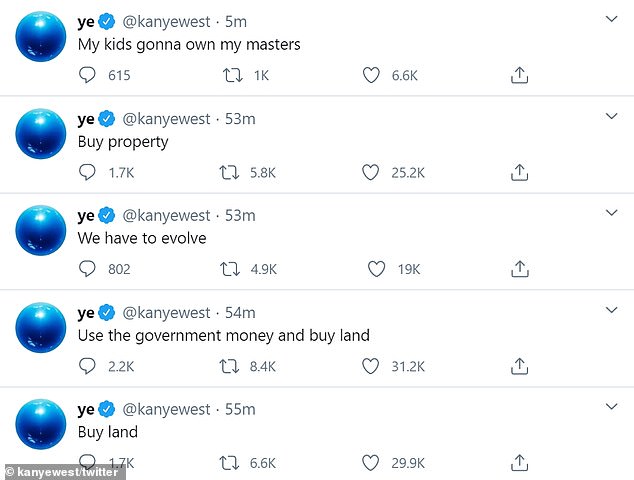 Late into the evening on Monday, the tweets kept pouring in making little sense

On Friday, West was told that he does not qualify to be on the presidential ballot in battleground state of Wisconsin after missing a filing deadline.

The decision was made by Brown County Circuit Judge John Zakowski who ruled in favor of the Wisconsin Elections Commission.

West had filed a lawsuit against the elections commission over the previous decision to bar him from the ballot because his nomination papers were submitted 14 seconds after the 5pm deadline on August 4.

In West’s case, Zakowski ruled that the state elections commission was correct in determining that the musician narrowly missed a 5pm filing deadline to get on the presidential ballot.

‘The unfortunate fact is this dispute could have been avoided had the West representatives simply arrived earlier,’ the judge said. 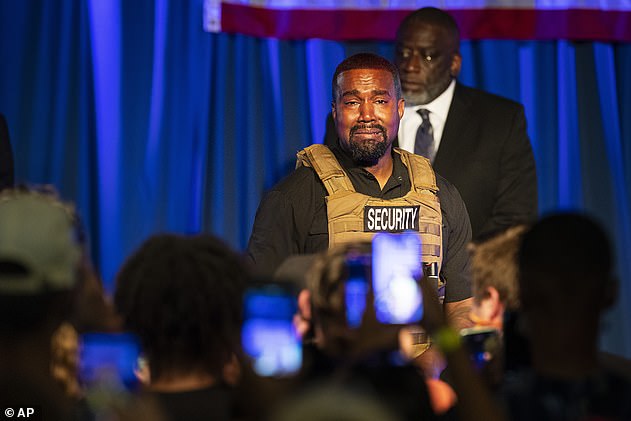 Kanye West (pictured at a South Carolina rally in July) does not qualify to be on the presidential ballot in battleground Wisconsin after missing a filing deadline, a judge ruled late Friday

‘Candidates need to plan ahead and arrive in time to get into the building and file the papers in the office of the commission prior to the deadline, there are no exceptions under the statute or the relevant case law.’

West had argued that the deadline did not expire until 5.01pm and regardless of the timing, commission staffers still accepted the papers. The commission voted that West had missed the deadline either by a few seconds or several minutes.

West announced a presidential bid in July, saying he’s seeking the nation’s highest office on a ticket he calls the ‘Birthday Party’.