EXCLUSIVE: James Franco hits back at ‘false and inflammatory’ sexual misconduct claims from two former students who say he dangled TV roles in exchange for explicit sex scenes at his acting school

Hollywood actor James Franco has hit back at ‘false and inflammatory’ allegations he sexually harassed and mistreated young actresses at his film school, DailyMail.com can reveal.

Two women who were enrolled in Franco’s Studio 4 film academy sued the movie star claiming he and his partners dangled film and TV roles in exchange for their appearance in explicit sex scenes or sexually-charged auditions.

They filed a class action lawsuit in October last year also claiming ‘Franco’s targets’ were also tricked out of pay by the actor’s comedy and improv school. 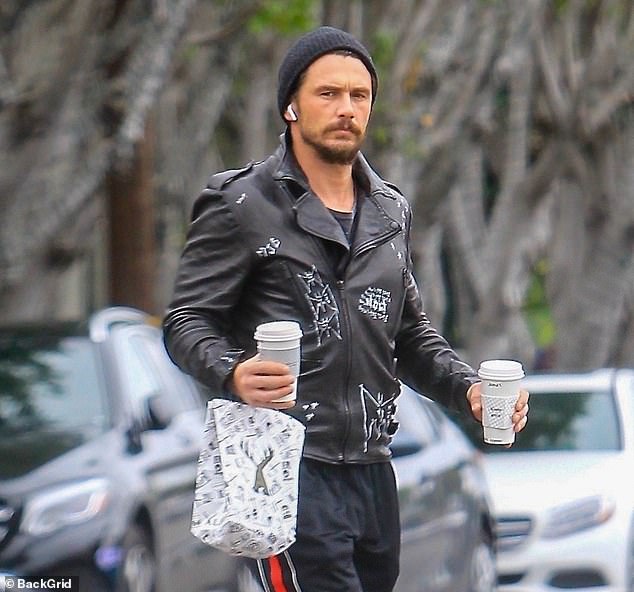 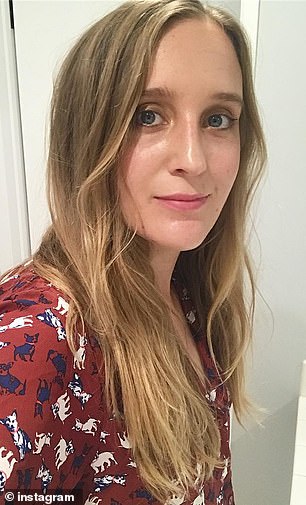 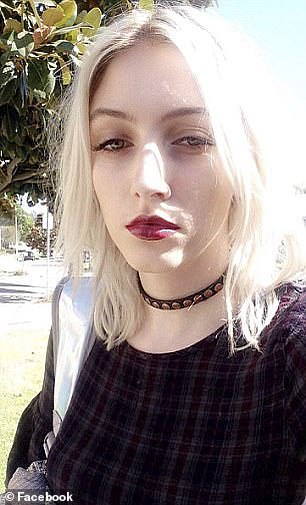 The former students, Sarah Tither-Kaplan and Toni Gaal, were among several actresses who came forward to publicly call Franco out for alleged sexually inappropriate and exploitative behavior, first after his appearance at the 2018 Golden Globes and later in a Los Angeles Times expose.

But in a legal demurrer – a written response to a complaint pleading for its dismissal on points of law – filed Friday and obtained exclusively by DailyMail.com, Franco slams the ‘salacious allegations’ and accuses the ‘attention-hungry’ women of trying to ‘smear’ his name by jumping on the bandwagon of the #MeToo and Times Up movements.

‘While the salacious allegations in the Complaint have made great tabloid fodder, they are also false and inflammatory, legally baseless and brought improperly in the form of a class action largely to gain as much publicity as possible,’ attorneys representing Franco and his partners wrote.

Franco’s attorney continued: ‘This lawsuit is a travesty of justice and the culmination of a meritless campaign that has unfairly tarnished a decent man’s hard earned reputation.’

Franco, 41, takes particular aim at accuser Tither-Kaplan, who is a former student of Franco’s acting school dating back to 2014.

Tither-Kaplan was among those who publicly denounced Franco’s alleged behavior on Twitter after his Golden Globes win in January 2018.

She tweeted: ‘Hey James Franco, nice #timesup pin at the #GoldenGlobes, remember a few weeks ago when you told me the full nudity you had me do in two of your movies for $100/day wasn’t exploitative because I signed a contract to do it? Times up on that!’

In response to her allegations which she later laid out in the class action suit, Franco’s lawyers say: ‘Ms. Tither-Kaplan had always expressed gratitude for having been given the opportunity to work in Emmy-nominated productions with Franco, one of her teachers.

‘Time after time she had posted unsolicited tweets and texts extolling Franco’s virtues, how much she admired him, and how much she got out of her time at Studio 4.’ 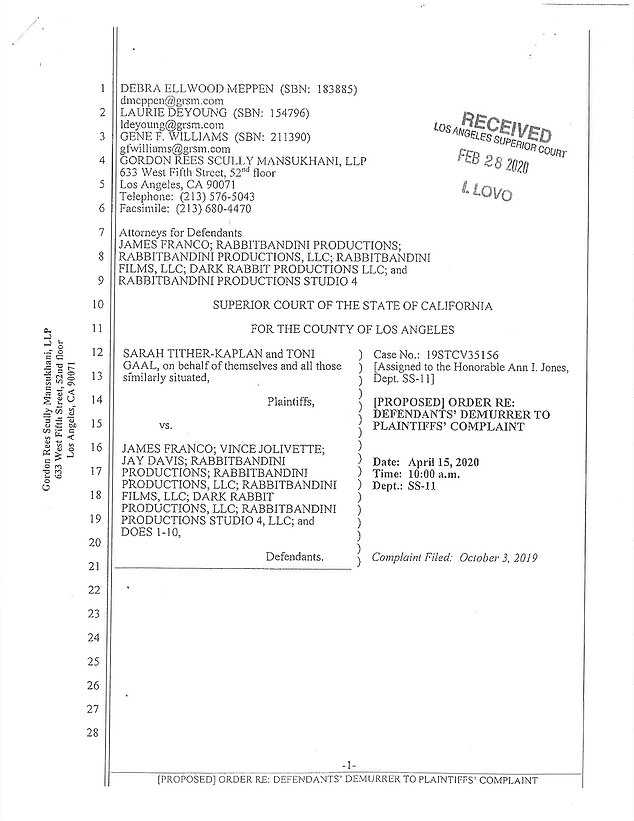 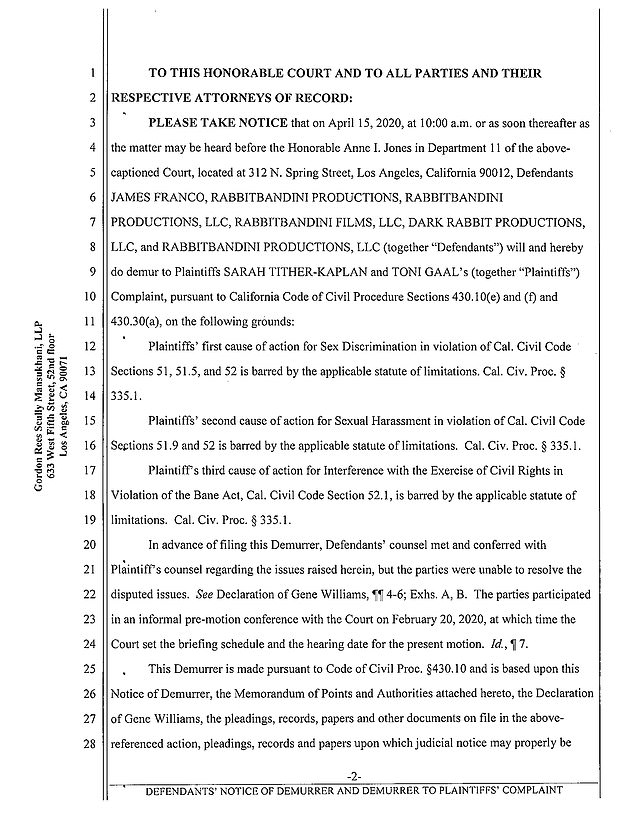 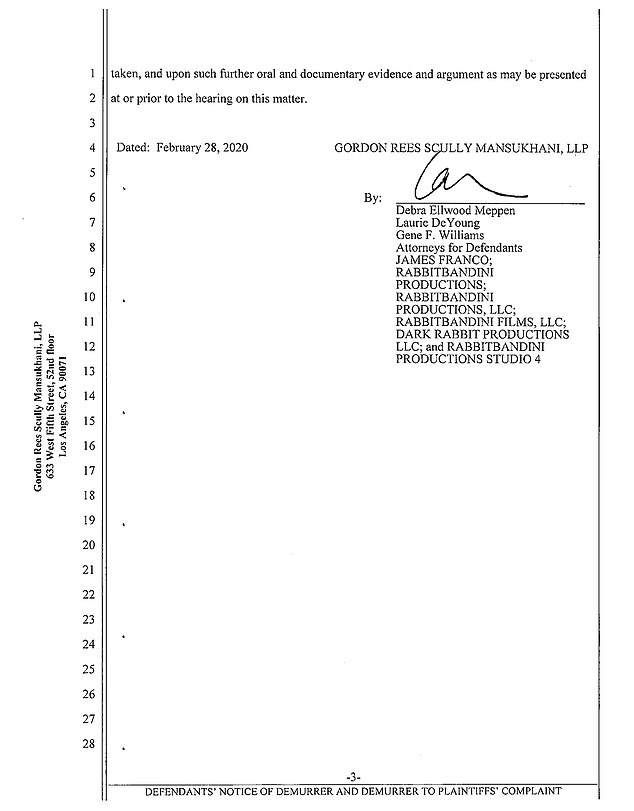 In a legal demurrer – a written response to a complaint pleading for its dismissal on points of law – filed Friday and obtained exclusively by DailyMail.com, Franco slams the ‘salacious allegations’ and accuses the ‘attention-hungry’ women of trying to ‘smear’ his name

The documents list several of the social media posts and texts which gush about Franco and Studio 4.

In one Tither-Kaplan said: ‘James is a gem. I’m lucky to be part of this big ol weird fam.’

In another she wrote: ‘It’s a dream to work with these beautiful weirdos.’ 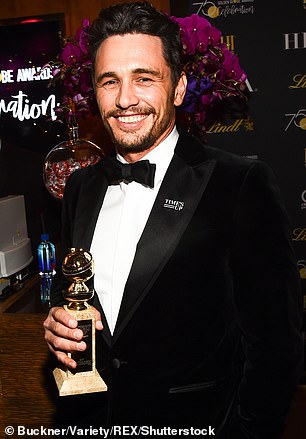 And in a third the actress references nude scenes, writing: ‘Thanks for censoring my nip jamesy. Looooveeee these maniacs.’

In other posts Tither-Kaplan says she had an ‘amazing experience’ working with Studio 4 and offered to help in any way she could in future, even if it meant running errands and making the coffee.

But, the legal docs state: ‘Now, over half a decade later and having failed to achieve any significant professional success, she claimed to have been mistreated.

‘Her unsubstantiated, false, and woefully belated allegations were, unfortunately if predictably, bought hook, line and sinker by the Los Angeles Times and other media outlets – and so began Franco’s odyssey as a falsely accused man.’

The class action suit accused Franco of creating ‘an environment of harassment and sexual exploitation’ at Studio 4, which was shuttered in 2017.

The Disaster Artist actor allegedly took advantage of his role as instructor by persuading female students to disrobe and/or engage in sexually-charged stage scenes with the suggestion they would get cast in one of his projects.

The suit says Franco ‘routinely pressured to engage in simulated sex acts that went far beyond the standards in the industry.’

It also claims Franco and his partners, Vince Jolivette and Jay Davis, through the academy and their various production companies opted to ‘sexualize their power and fame’.

They are alleged to have recruited women along with ‘various other ‘scouts’ tasked with the job of seeking out young, naive women between the ages of 17 [and] 24 because these women would not know how the film industry functioned,’ the suit claims.

The school’s two-year program promised to teach students the Meisner method, ‘as practiced by Franco while giving them the ability to audition and be hired as talent for RabbitBandini Productions,’ the suit claims, making a reference to one of the actor’s production firms, all the while ‘sexually exploiting and humiliating female students and actors.’

The alleged incidents are said to have taken place in 2014, the same year the school opened in Los Angeles and New York. 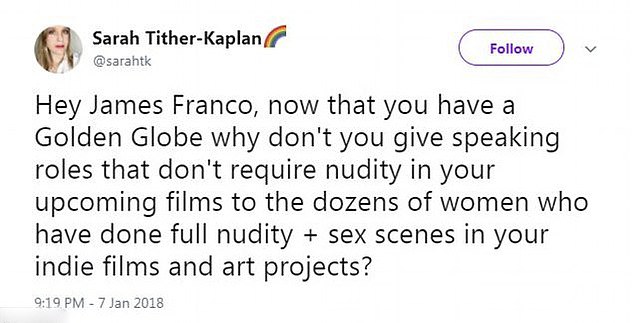 Tither-Kaplan’s tweet pictured above was among several made after Franco’s appearance at the Golden Globes, alleging sexual improprieties and exploitation 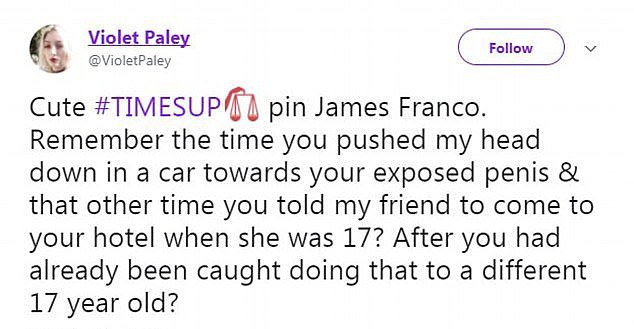 Paley said: ‘& that other time you told my friend to come to your hotel when she was 17? After you had already been caught doing that to a different 17 year old?’

Tither-Kaplan enrolled in the LA school in February of that year and Gaal in April.

But in the demurrer Franco debunks many of the women’s claims.

The paperwork says Tither-Kaplan ‘knowingly engaged’ in nude scenes under terms of a contract she signed and no one pressured her to perform in the films.

The filing also addressed Tither-Kaplan’s most shocking claim that she witnessed Franco removing the vaginal guards of four other actresses.

The documents state: ‘Tither-Kaplan admitted that she was not one of the actresses using a vaginal guard… all of the actresses involved confirmed that their vaginal guards were not removed, that the shooting of the film was professional, and that they did not feel mistreated, uncomfortable or taken advantage of; and… the cameramen involved in shooting the scene have confirmed that the guards were never removed.’

The suit added that Gaal has ‘personal grievances’ which have no place in a class action lawsuit.

In the suit Gaal claims that she was denied entry to a special ‘sex scenes master class’ for expressing her concern over the class.

‘She was told by a male employee to ‘grow thicker skin’ and stop being so sensitive,’ the suit claims.

The demurrer states that Gaal is ‘upset’ that an audition was ‘filmed’ and appears to have competing grievances against Franco to those of Tither-Kaplan, however.

‘Gaal is suing because she was not selected for a ‘Master’ acting class back in 2014, while Tither-Kaplan is upset that she was,’ the filing says.

The demurrer intends to have the lawsuit thrown out based on the facts and points out that several of the most damning claims were brought three years after the applicable two-year statute of limitations had expired. 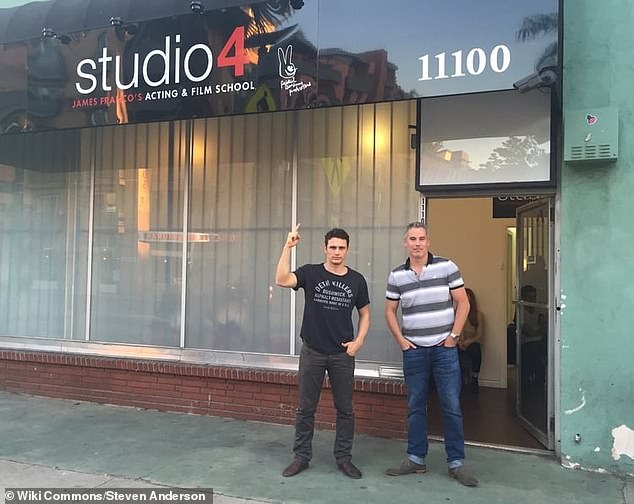 The acting school, Playhouse West Studio 4, opened in 2014 and abruptly closed in 2017 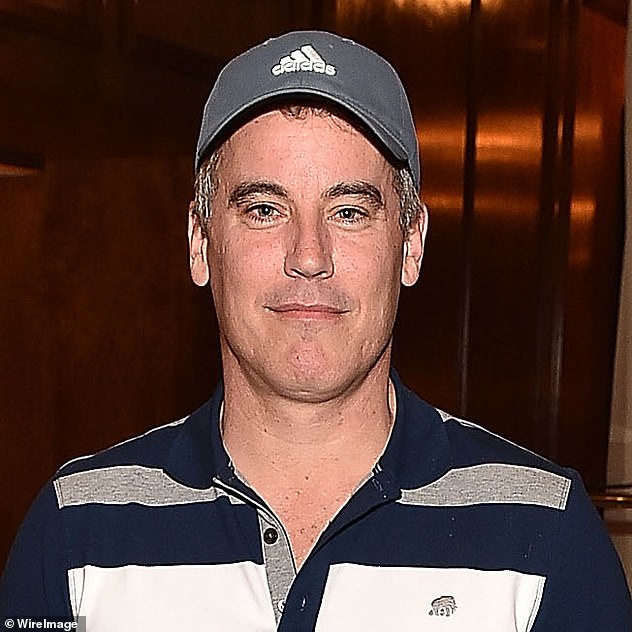 Franco owned the school with partner Vince Jolivette, above 2015, who is also named as a defendant in the lawsuit

The filing states the women go to great lengths to smear Franco and his partners in the lawsuit, describing them as overtly and unabashedly ‘sexually hostile, predatory and exploitive’.

But questioning the women’s claims that they didn’t realize the true nature of what was happening until years later, the document states: ‘It would be impossible for a reasonable person, faced with such treatment, to fail to understand that Defendants actions were wrong and actionable.’

Franco’s lawyers say that the women have used the #MeToo and Times Up movement to ‘wrongly ensnare an innocent person’.

After Franco’s appearance at the 2018 Golden Globes, where he walked away with a win for best actor in a musical or comedy for his role in ‘The Disaster Artist, and wore a ‘Time’s Up,’ pin, actress Violet Paley, tweeted: ‘Cute #TIMESUP pin James Franco. Remember the time you pushed my head down in a car towards your exposed penis & that other time you told my friend to come to your hotel when she was 17? After you had already been caught doing that to a different 17 year old?’

Paley later clarified her tweet by writing: ‘Just to be clear I wasn’t 17, I was an adult.’

The age of consent in both New York and California is 17.

‘If I have done something wrong I will fix it. I have to,’ said Franco in response to the public outcry.