Home » World News » Italy is no outlier, it’s a frontrunner. These nations are set to follow

Amsterdam: It has long been tradition for an elite group of flower growers to sweep through the fields of the Netherlands in early April. Their colourful haul is blessed by the Bishop of Rotterdam before being shipped to the Vatican, where it is carefully arranged to frame the Pope during Easter Sunday Mass.

Chief designer Paul Deckers has been part of the ritual since 1988. But not this year. His plans are in ruins as the coronavirus pandemic radiates across Europe.

"Given the developments and the measures which have been taken in Italy we decided not to take any risks," Deckers says. He doesn't think the event in St Peter's Square will even go ahead. 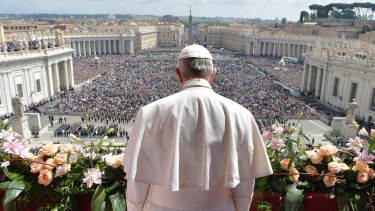 Pope Francis delivering an Easter Sunday Mass at the Vatican, surrounded by flowers from the Netherlands. Credit:AP

As COVID-19 spreads across the continent, other decisions of much greater consequence loom. Some are matters of actual life or death. Doctors in Italy this week published guidelines warning that patients over a certain age might have to be left to die so that scarce intensive care beds can be given to younger people with a better chance of survival.

"Resources may have to be used first for those with a higher probability of survival and, secondly, who has the most years of life left, and offer the maximum number of benefits to the majority of people," the advice warned.

The scale and impact of the Italian outbreak has stunned the world. The country has been shut down under emergency measures not seen since World War II. Its economy has been paralysed. Anyone who goes outside is being stopped by police or the military and asked to produce evidence about why they are there. Total infections have now surpassed 15,000 and more than than 1000 people have died in a fortnight. 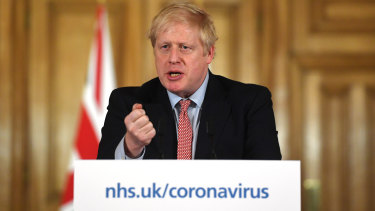 Prime Minister Boris Johnson announces Britain will move from a ‘containment’ phase to a ‘delay’ phase.Credit:Bloomberg

He also says closing schools would have minimal impact and classes would have to be suspended for up to four months to make any material difference to the rate of spread.

In a line graph form, Italy's outbreak will ultimately resemble an upside down capital 'U'. This curve means the pandemic may pass more quickly but the impact on the health system of such a massive short-term caseload is severe.

The British government says its strategy will flatten that curve and spread out the infections out over a longer period – Johnson calls it "squashing the sombrero". The social distancing measures put in place by other countries should achieve the same effect but Britain's plan is using different techniques to achieve it.

Not everyone is convinced. Former British health secretary Jeremy Hunt – Johnson's opponent in last year's Conservative leadership contest – says he is "concerned" only four weeks remain before Britain finds itself in the same situation as Italy and "what we do every single day of those four weeks is absolutely critical".

But Johnson is holding firm and even took a swipe at other countries for a need to "be seen to act" which means they "may do things that are not necessarily dictated by the science".

The contrast with the rest of Europe couldn't be sharper – and the stakes could not be higher if Johnson and his team have gambled on the wrong strategy.