Iran’s death toll from coronavirus has jumped by 11 in just a day, bringing the total number of people to have died from the deadly virus to 54.

Health Ministry spokesman Kianush Jahanpur made the announcement on state TV today, as he confirmed the number of those infected has now reached 978.

He called on Iranians to avoid any unnecessary trips and stay at home after the country saw a huge spike in the number of people to have contracted the virus in a 24-hour time-frame. 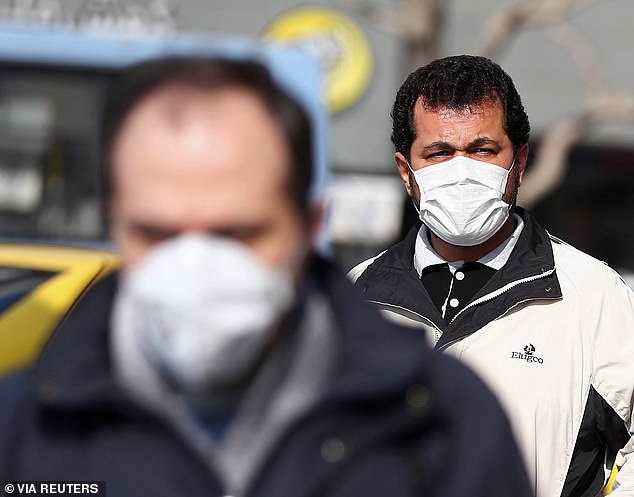 Iran’s death toll from coronavirus has jumped by 11 in just a day, bringing the total number of people to have died from the deadly virus to 54. Pictured: men wear masks in Tehran

The three patients, who had been in isolation at home, were quarantined at a Beirut hospital after showing symptoms, the ministry said in a statement.

‘There were 385 new cases of infected people in the last 24 hours, increasing the total number to 978. The death toll is 54,’ Jahanpur said.

Iran has had the highest number of deaths from coronavirus outside of China, where the outbreak originated. 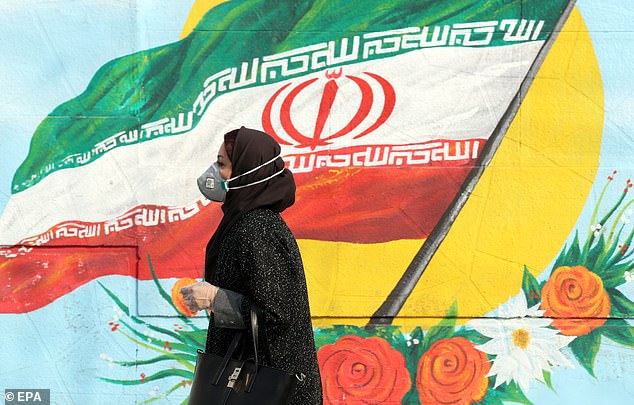 He also called on Iranians to avoid any unnecessary trips and stay at home after those contracting the virus saw a huger spike in the space of just 24 hours. Pictured, a woman with a mask walks in Tehran

On Saturday, the death toll was put at 43, with 593 infected. Some neighboring countries have closed their borders with Iran and several countries have stopped flights.

A handful of countries in the region have reported infections among people who traveled to the Islamic Republic.

Iran’s elite Revolutionary Guards have allocated facilities across the country to help eradicate the new coronavirus, a Guards commander told a televised news conference on Sunday.

‘We have set up centres across the country to help people to tackle the virus … we need national cooperation to tackle this crisis. 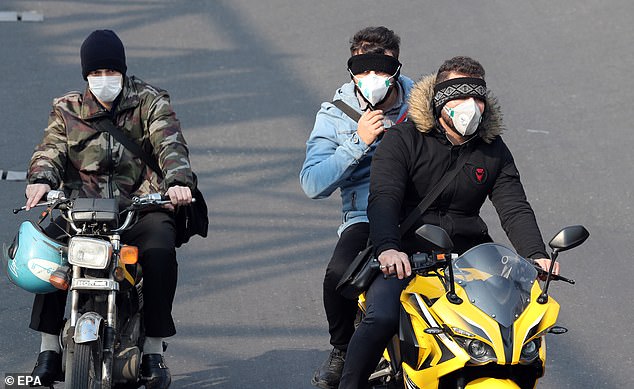 Iranians wearing face masks ride their motorcycles at a street in Tehran. Donald Trump has banned travel to Iran after America reported its first death

‘People should follow our health officials’ advice,’ said the commander, who was not named by Iran’s Press TV.

Donald Trump has banned travel to Iran after America reported its first death from the virus.

The US president added that he was considering additional restrictions, including closing the border with Mexico in response to the outbreak.

Elsewhere, the husband of British-Iranian woman Nazanin Zaghari-Ratcliffe believes she has contracted coronavirus at the prison where she is being held.

Richard Ratcliffe said his wife has repeatedly asked to be tested for the virus at the Evin prison in Tehran after suffering from a ‘strange cold’.

Although there are currently no confirmed cases at the prison, Covid-19 has spread rapidly across Iran.

The Foreign and Commonwealth Office (FCO) has called on the Iranian government to ‘immediately allow’ health professionals into the prison to assess British-Iranian dual nationals.

The rapid spread of the new coronavirus has increased fears of a pandemic, sending global markets into a dive last week and prompting governments to step up control measures.

As of Sunday, there have been over 87,694 cases of the virus globally, the majority in China.

Outside of China, it has spread to 53 countries, with more than 6,500 cases and more than 100 deaths. Globally, the illness has killed nearly 3,000 people.

Mainland China reported the biggest daily rise in coronavirus cases since February 22 on Sunday as more infections emerged among prison inmates in the epicentre of the outbreak, but officials emphasised the overall situation continues to improve.

Churches were closed in South Korea on Sunday, with many holding online services instead, as authorities fought to rein in public gatherings. The tally of cases rose by 586 to 3,736 while the death toll rose to 20.

Italy will introduce measures this week worth 3.6 billion euros (£3billion) to help the economy withstand the largest outbreak of coronavirus in Europe, Economy Minister Roberto Gualtieri said on Sunday.

Italy has registered more than 1,100 cases and at least 29 people have died.

Factory activity in China contracted at the fastest pace ever in February, highlighting the damage from the outbreak on the world’s second-largest economy.

Britain announced a jump in cases on Sunday, with 12 new infections taking the total to 35, as health minister Matt Hancock said the government was preparing for the global epidemic to get worse.

Qatar, Ireland, Ecuador and Luxembourg reported their first cases of the virus.

The French government put a temporary ban on public gatherings with more than 5,000 people. France now has 100 confirmed cases. Of those, two have died.

Japanese Prime Minister Shinzo Abe asked the public to cooperate in a “tough battle” to contain the outbreak in coming weeks as the country prepares to hold the Olympic Games in Tokyo this summer as planned.

The virus has prompted numerous cancellations or postponements of sporting events.