International student enrolments at Victorian schools have fallen more than 30 per cent this year, amid warnings that schools will disband their international programs if Australia’s border remains closed for muich longer.

Close to 4900 international students were enrolled in Victorian schools at the start of this year, compared with about 6950 a year prior.

Only 448 international students commenced at Victorian schools at the start of this year, compared with close to 1400 students in early 2020, official figures show. 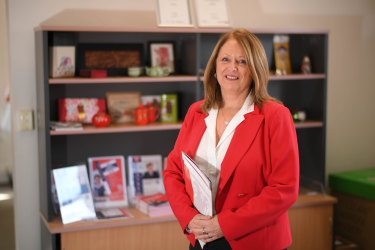 Tracey O’Halloran, managing director of AEAS, says it took four years for enrolments to recover after the GFC. Credit:Eddie Jim

Victoria had Australia’s biggest international school program before COVID-19, with many schools relying on these students for income and academic plaudits. Sixty-four per cent of international students, who are primarily from China, Vietnam and Cambodia, attend government schools.

In 2019, state schools were ordered to stop enrolling international students as applications surged to a record high.

A year later, during Australia’s first wave of coronavirus, thousands of students returned home. About 4000 chose to stay in Australia indefinitely rather than return to their home country for remote learning.

Now, Australia’s delayed COVID vaccine rollout and budget forecasts that the country’s border won’t reopen for another 12 months have raised concerns enrolments will fall off a cliff next year. 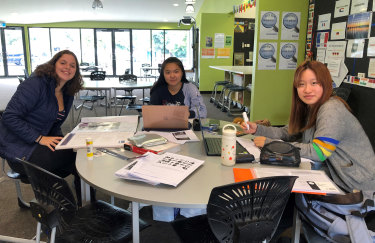 Ele Martinez Castelli from Uruguay with Qiaochu Weng and Lei Lin from China. The trio are international students at Bendigo Senior Secondary College.

Bendigo Senior Secondary College had 16 international students before COVID-19. The school now teaches seven on campus and 16 students offshore, some of whom are enrolled in other government schools, to keep its program viable.

Principal Dale Pearce said schools with large programs were probably shedding staff due to uncertainty over when the country’s border will reopen.

“There will be some schools who I would expect would say, ‘This is marginally profitable for us anyway and it’s all too much trouble now so we can’t keep those staff on’,” he said. “And then some of those schools will make a decision to close their international student programs down … In the end if it’s costing schools money, then they don’t it.”

Tracey O’Halloran is the managing director of Australian Education Assessment Services, which helps schools market themselves overseas and conducts tests of international students.

AEAS has been working with dozens of private schools on proposals to bring back international students, including flying them in on charter flights from low-COVID places such as Singapore.

But with the federal budget warning Australia’s borders will probably remain closed until the second half of 2022, Ms O’Halloran said international student programs would have to close.

“Some English-language programs have been shuttered,” she said. “I’m aware of one school that has decided to not continue their program at all so that will be quite variable across schools. There have been other schools that have not been accepting new enrolments until things are clearer.”

Not all schools are worried. Colin Axup, the Victorian Association of State Secondary Principals president, said schools were generally in wait-and-see mode.

Small pilot programs for students to return to fly to Australia are expected to commence later this year.