The world's second-most populous country has added more than 1 million cases this month alone and is expected to become the pandemic's worst-hit country within weeks, surpassing the United States, where more than 6.6 million people have been infected. 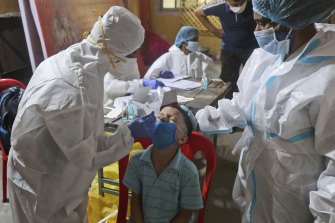 Health workers collect a swab from a boy in Mumbai to test him for COVID-19. Credit:AP

The ministry said 1290 more people died in the past 24 hours, for a total of 82,066, which is the third-highest toll in the world. Experts warned that India's fatality rate could increase in coming weeks with lockdown restrictions relaxed except in high-risk areas.

But authorities ruled out imposing a second countrywide lockdown as recoveries were growing at more than 78 per cent. Its fatality rate is 1.6 per cent, far lower than 3 per cent in the United States and Brazil, according to tallies by Johns Hopkins University.

Dr Gagandeep Kang, an infectious diseases expert from Christian Medical College in the southern Indian state of Vellore, said the increase in cases in India was inevitable. But she said the country still has a chance to limit the growth through a strategy of testing and isolating affected places.

She said "the goal was for India to do enough testing to bring down the test positivity rate, or fraction of tests that test positive to less than 5 per cent or even less than 1 per cent".

Most of India's deaths are concentrated in its large cities — Mumbai, Delhi, Bengaluru, Chennai and Pune. But smaller urban centers in Mahrashtra such as Nagpur or Jalgaon have also reported more than 1000 deaths.

WHO warns of COVID-19 momentum as winter looms in north

The World Health Organisation warned on Wednesday that COVID-19 is spreading at a worrying pace in some parts of the northern hemisphere, a few months away from the winter influenza season.

"We are starting to see worrying trends in some countries," Maria Van Kerkhove, WHO technical lead for COVID-19, said during a social media webcast.

"We are seeing increases in hospitalisations, in intensive care units, particularly in Spain, France, Montenegro, Ukraine and some states of the United States. That is worrying because we have not seen the flu season yet."

Dr Mike Ryan, the WHO's top emergency expert, advised people at high risk for COVID-19 infections to get a flu vaccination. 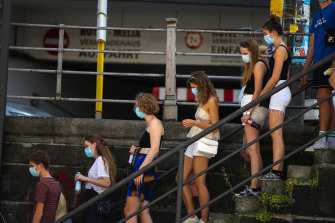 Hospitalisations of people aged 15-49 infected with COVID-19 are increasing in several countries.Credit:Bloomberg

French health authorities reported new 9784 confirmed coronavirus cases on Wednesday, the third-highest number of daily additional infections on record since the disease started to spread in the country at the end of the winter.

The Madrid region, one of the worst hit by COVID-19 in Spain, is planning to announce restrictions on movement on Friday that could include targeted lockdowns in virus hotspots, a senior official said, as the country's infections surged again.

Madrid accounts for about one-third of active coronavirus cases in Spain, with a higher incidence in high-density and low-income neighbourhoods, mainly in the south of the capital.

The health ministry registered on Wednesday 4728 new infections in the last 24 hours, including 1854 in Madrid. That was up from 3022 cases reported on Tuesday and brings the cumulative tally to 614,360 – Western Europe's highest. With 17 new deaths, Spain's death toll has reached 30,243.

Madrid also accounts for the highest proportion of hospital capacity occupied by COVID-19 patients, at 22 per cent, way above Spain's average of 8.5 per cent. 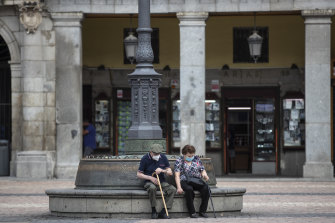 A man and woman sit in downtown Madrid, which is experiencing a surge in coronavirus infections.Credit:AP

"There will be decisions focused on restricting mobility," Antonio Zapatero, head of the COVID-19 response for the region, told reporters, adding the health department was considering locking down areas with the highest incidence of the virus.

"There has been a relaxation of behaviour that we cannot afford," he said, adding people were organising parties, drinking in the street and not respecting quarantine rules.

Since restrictions on movement were lifted and mass testing began in late June, infections have risen in Spain from a few hundred a day to thousands. Deaths have also increased to 50-60 per day in the past two weeks from single digits in July.

"Many people are doing whatever they feel like, so I do think we need to have more measures," said Ines Diaz, a Madrid resident.

The latest plan comes amid controversy in Spain over who is to blame for the increase in infections, with regions and the central government pointing fingers at each other.

About 12 million people in South Africa have "probably" been infected with the coronavirus, but that startlingly high number has not caused a similarly high death rate and might indicate a widespread "level of immunity," the country's minister of health says.

More than 20 per cent of South Africa's population of 58 million have had the virus at some point, Dr Zweli Mkhize estimated earlier this week. He cited studies that found the presence of coronavirus antibodies in blood samples taken from parts of the population. The findings have prompted the government to start a more complete national study, Mkhize said.

"South Africa has seen the surge receding, and thus raises the question of the level of immunity that may already be existing in society," he said.

Other studies have indicated that up to 40 per cent of the population might be immune to the virus, the health minister said. Some South African experts suggest that Africa's most developed economy may be approaching herd immunity, but scientists believe at least 70-80 per cent of a population needs to be immune before there's any effect. And with COVID-19 it's unclear how long that immunity might last.

Amid significantly decreasing confirmed virus cases, South African President Cyril Ramaphosa is addressing the nation Wednesday evening and is expected to announce a further easing of lockdown restrictions, which might include a limited opening of international borders to travellers from some countries.