India accounted for almost half of all global Covid cases and one in four deaths reported in the last seven days, shocking data has revealed, as the country’s virus crisis continues unabated.

Of the 5.7million cases reported between April 27 and May 4, India accounted for almost 2.6million of them, the WHO said in its weekly update on Tuesday.

India also recorded more than 23,000 of the 93,000 global deaths between the same dates – though analysts have said both case and death figures could be up to ten times the official numbers.

Over the last two weeks, it means that at least 120 people have died of Covid in India every hour, as doctors warned it could be months before the situation improves. 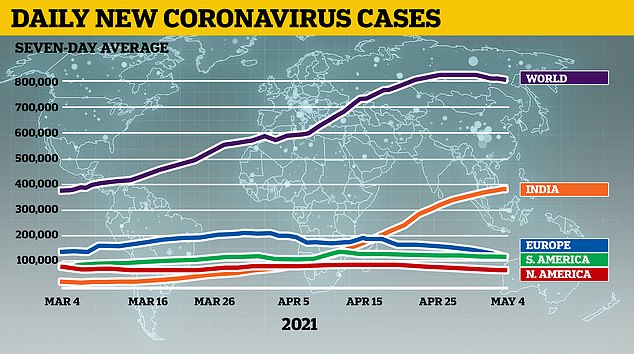 India now accounts for almost half of the global total of Covid cases reported each day, figures show, outstripping entire continents such as Europe, South America, and North America 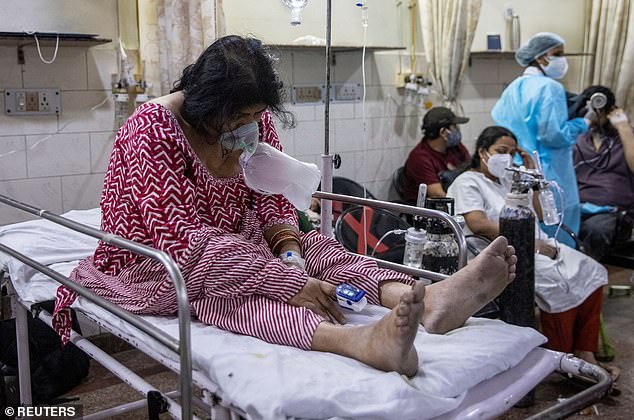 An Indian woman suffering from Covid breathes through an oxygen mask at a hospital in Delhi, as it is revealed the country accounted for almost half of global cases last week 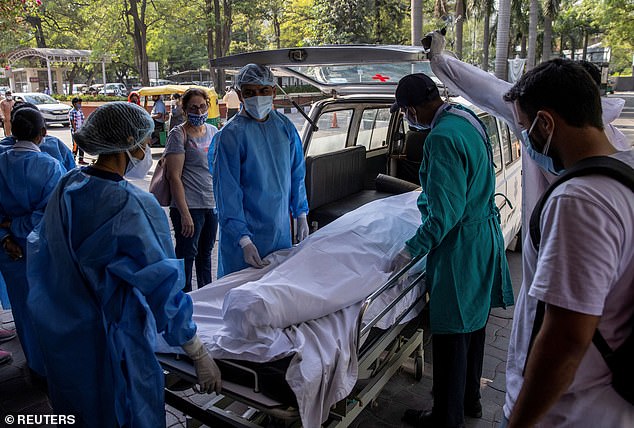 The body of Karuna Vadhera, 74, is taken from a hospital in Delhi to a crematorium to be burned, as data showed India accounted for one in four global virus deaths in the last week 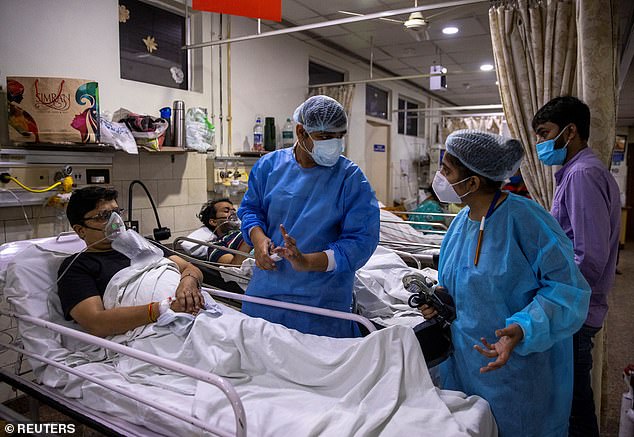 Rohan Aggarwal, 26, a resident doctor treating patients suffering from Covid, talks to staff during a mammoth 27-hour shift at a hospital in New Delhi 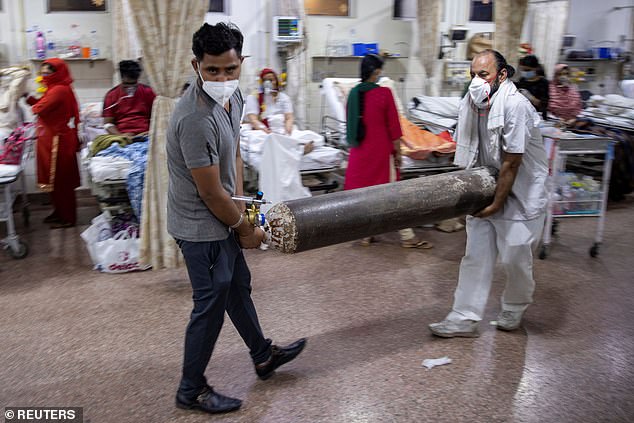 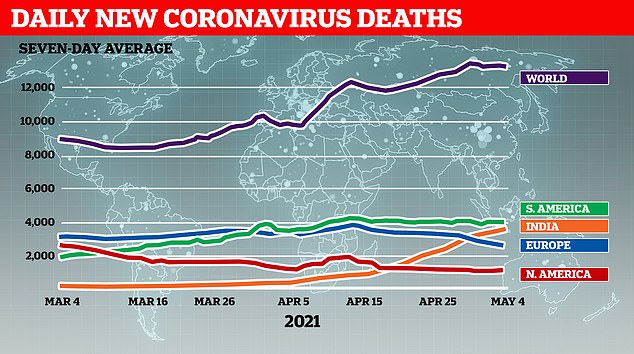 India also accounts for around one in four Covid deaths reported each day, though experts have warned the true figure could be up to ten times higher

India’s second deadly surge of COVID-19 has seen hospitals runs out of beds and oxygen and left morgues and crematoriums overflowing. Many people have died in ambulances and car parks waiting for a bed or oxygen.

Prime Minister Narendra Modi’s government has been widely criticised for not acting sooner to suppress the second wave of the virus. Religious festivals and political rallies have attracted tens of thousands of people in super spreader events.

‘We need a government. Desperately. And we don’t have one. We are running out of air. We are dying…’ wrote Indian author Arundhati Roy in an opinion piece published on Tuesday calling for Modi to step down.

‘This is a crisis of your making. You cannot solve it. You can only make it worse….So please go. It is the most responsible thing for you to do. You have forfeited the moral right to be our prime minister.’

India’s government says there are enough oxygen supplies but distribution has been hindered by transport problems.

A two-judge bench of the Delhi High Court has been holding almost daily video conferences to hear petitions from hospitals seeking oxygen and invoking India’s constitutional right to protection of life.

India’s surge in infections has coincided with a dramatic drop in vaccinations due to supply and delivery problems.

At least three states, including Maharashtra, home to the commercial capital of Mumbai, have reported a scarcity of vaccines, shutting down some inoculation centres.

India’s opposition has called for a nationwide lockdown, but the government is reluctant to impose a shutdown for fear of the economic fallout, although several states have imposed social curbs.

In the remote state of Mizoram which borders Myanmar, beds are in such short supply in Zoram Medical College, the stateâs biggest COVID hospital, that all non-COVID patients have been asked to leave, said government official Dr Z.R. Thiamsanga.

Only three out of 14 ventilators are still available. 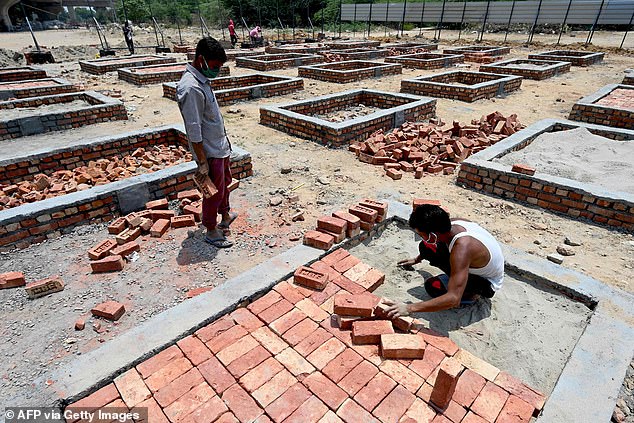 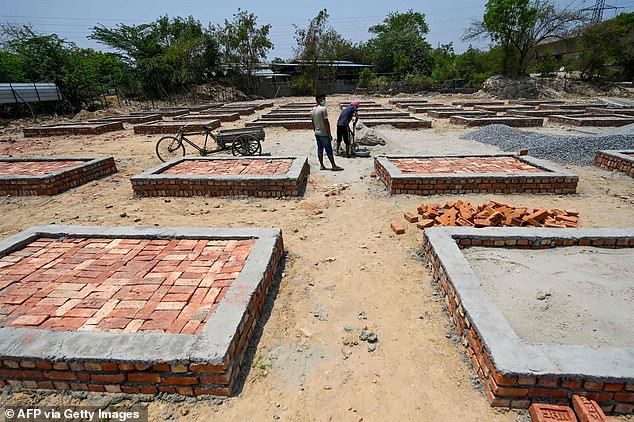 Hindu tradition states that bodies must be burned within 24 hours of death, meaning crematoriums have been forced to expand to deal with the number of Covid victims

‘In my opinion, a complete lockdown is required to control the situation,’â he told Reuters from the state capital Aizawl.

Medical experts say the actual numbers of dead and infected in India could be five to 10 times the official tallies. The country added 10 million cases in just over four months, after taking more than 10 months to reach the first 10 million.

Daily testing in India has fallen sharply to 1.5 million, state-run Indian Council of Medical Research (ICMR) said on Wednesday. It hit a peak of 1.95 million on Saturday.

Public health experts believe India will not reach herd immunity any time soon but say hospitalisations and deaths will reduce significantly in six to nine months, according to a report in The Economic Times.

Herd immunity is when a high enough proportion of the population is vaccinated or been infected and developed antibodies so that one infected person could theoretically only infect less than one person, halting the spread of the virus.

Australia has banned travellers from India who have been in the country within the prior 14 days but Hockley said the players would wait outside India for approval to head home.

Eight Asiatic lions at an Indian zoo in the southern state of Hyderabad have contracted the coronavirus, the government said on Tuesday, adding that there was no evidence that animals could transmit the disease to humans. 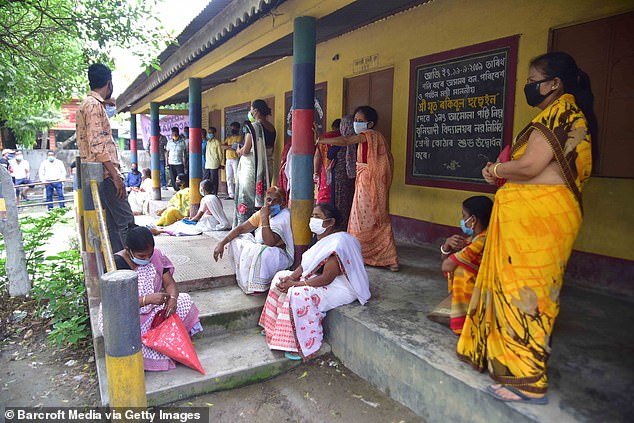 Women wait in line at a vaccination centre in Assam state, India, to get their Covid jabs – even as some states warned they have run out of doses 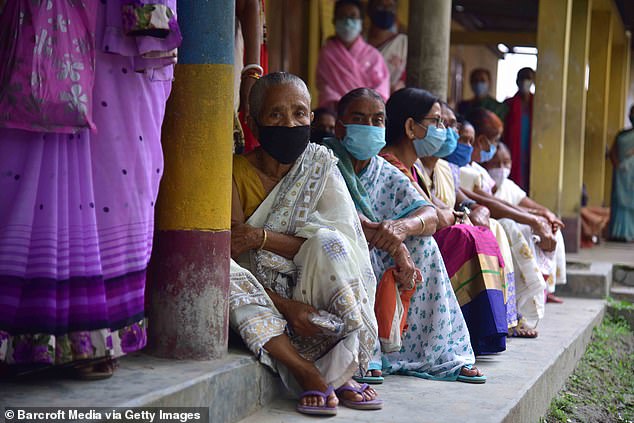 India is attempting to vaccinate its way out of the current crisis but state leaders have warned there are not enough doses, and it will take months to ramp up production (pictured, women wait for jabs in Assam state)