Roadmap to happiness: Proportion of Brits who believe life will return to normal within six months surges 10 per cent after Boris Johnson launches a plan to end the lockdown – but new data shows Covid financial hit has affected the poor the most

Optimism for the future has surged in the wake of Boris Johnson’s roadmap out of lockdown, official figures revealed today.

The proportion of Britons  who believe that the Covid crisis will be over within six months rose from 22 per cent to 32 per cent in a week after he unveiled his plan to end the lockdown by June.

At the same time, the proportion who believed it would take more than a year for the nation to return to normal fell  from 27 per cent to 20 per cent.

The figures from the Office for National Statistics (ONS) were taken either side of Mr Johnson’s roadmap unveiling on February 22, which will begin with the return of schools on Monday.

But at the same time the ONS revealed how the economic impact of the past year, including three brutal lockdowns, has fallen disproportionately on the nation’s poorest paid.

‘High vulnerability’ jobs in the hospitality sector were particularly at risk of reductions in hours and pay.

Waiters and waitresses saw a pay decrease of 10 per cent compared with 2019, with 77.3 per cent were furloughed.

In contrast, most professional occupations, which include healthcare specialists, teachers and accountants, fall into the ‘low vulnerability category’ and were less badly hit. 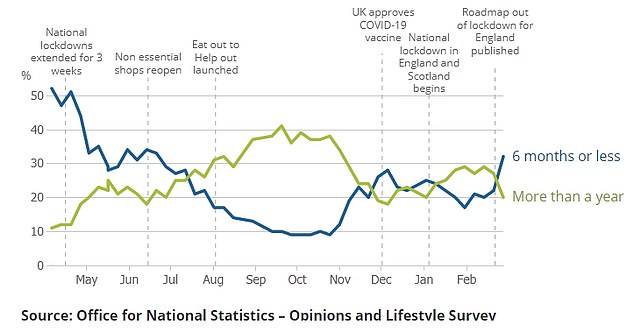 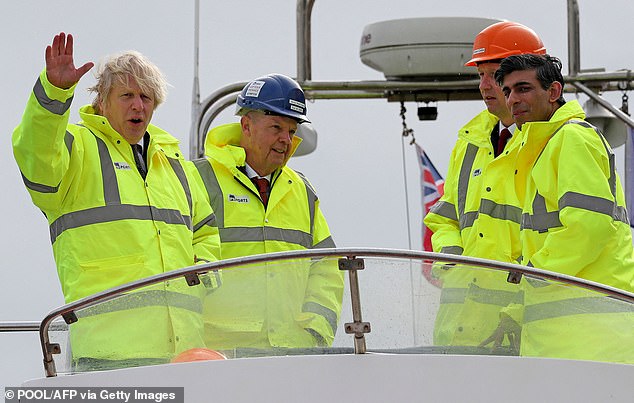 The proportion of Britons who believe that the Covid crisis will be over within six months rose from 22 per cent to 32 per cent in a week after he unveiled his plan to end the lockdown by June. 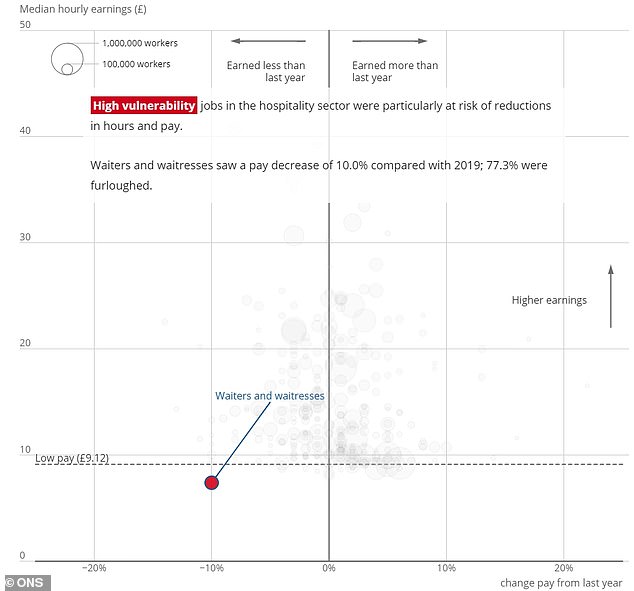 More than half (53 per cent) of those furloughed during the first lockdown last year  were in the high vulnerability group of jobs.

They include construction labourers, security guards or cleaners, and skilled trades occupations such as electricians, gardeners or tailors. These are less likely to be classes as key workers or be done from home, the ONS said.

Two-fifths (41.4 per cent) of jobs in the high vulnerability group saw pay reductions in the last year.

The majority of roles in this group are likely to be held by men, although women are the majority among the very worst paid, the ONS found. Some 72.3 per cent of occupations with median hourly wages below the low wage threshold were women.

Low paid jobs include cleaning, domestic or kitchen, and catering roles, which are mostly done by women.

And almost half of teenage workers are in the high vulnerability group.

Lorna Carter-Blake, managing director of DA Training and Consultancy, said: ‘Claims by the Government that we’re all in this together ring increasingly hollow when you look at the raw data.

‘While higher earning professionals have been the least likely to see their income impacted by the pandemic, as they can largely work from home, those in lower paid jobs who cannot are the most likely to earn less.

‘For the lowest earners to be the ones with the highest chances of receiving reduced pay is rubbing salt in the wound.’