Home » World News » ‘I won’t go away until I get what I want’: Man blackmailed woman with intimate images

A Sunbury man who stole sexually explicit images of a woman and anonymously posted them online in an attempt to coerce her into sending him a sexually explicit video has been spared a prison sentence after he was convicted of blackmail.

Forklift driver Glenn Maxwell, 48, began an escalating campaign of threats and intimidation against his victim in February last year. 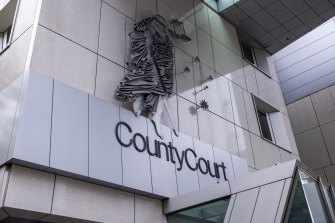 Glenn Maxwell was sentenced at the County Court on Tuesday after pleading guilty to blackmailCredit:Wayne Taylor

“Honestly, I won’t go away until I get what I want … I may stop asking for a while then start up again but not ever giving in,” one message read.

Maxwell was arrested on July 26 last year after police linked IP addresses from several online accounts to his residential address. He initially denied the offending, and claimed his phone may have been hacked, before he was charged with blackmail. The father of two pleaded guilty to the charge at the County Court on June 14, before he was sentenced on June 21.

While the offence of blackmail carries a maximum sentence of 15 years, Maxwell was handed a three-year community corrections order that requires him to perform 400 hours of community service.

Blair said that Maxwell had acted with a “concerning level of persistence,” and that he had communicated in a way that was “increasingly threatening and aggressive.”

But she noted he was a first-time offender, was responding to treatment and was genuinely remorseful.

The victim in an impact statement said the contents of emails sent by Maxwell were so detailed that she felt she was being stalked, and during the offending she was unable to sleep and was constantly anxious.

The father of two had stored hundreds of explicit images and videos of the victim on his phone. Following his arrest on July 26 last year, detectives found that he accessed the woman’s phone in June and September in 2020.

Police also located a screenshot from September 2020 in a password-protected app on Maxwell’s phone that revealed photos from the victim’s iCloud account had been sent to Maxwell’s Gmail account.

The same folder contained a recording of CCTV footage that showed the victim entering the PIN for her phone.

When the victim refused to comply with his demands, Maxwell publicly uploaded explicit images of the victim to social media, and sent several emails containing the images to her work colleagues.

He first contacted the victim on February 26 last year, sending a text via a burner phone.

“Hey been going to txt you for months” the anonymous message read. “Did you mean to email me? Not complaining but not expecting them either.”

Maxwell continued to contact the victim via text, repeatedly demanding she send more explicit content, while refusing to identify himself.

“I have seen everything but want more,” he wrote in one message.

The victim and her partner blocked the number used by Maxwell on March 4 but in late April, Maxwell contacted the victim again, this time using Instagram accounts he had created. He used one of the accounts, which used the victim’s name as its handle, to publicly upload 16 explicit images of the victim. Once the victim saw the images, Maxwell deleted them.

“Current pic has 22 views from friends and randoms. Like I said earlier it has just begun only you can stop it,” one message read.

In another, he wrote “I won’t stop until I get that one thing … Might post more tonight if there is enough demand. I’m sure there will be you are popular ;).”

Days later, he started texting the victim from a new phone number and sent emails to her work.

“Honestly, I won’t go away until I get what I want … I may stop asking for a while then start up again but not ever giving in.”

On May 21, Maxwell registered a third mobile phone number under a false name. Along with further threats, he sent a series of GIFs and images showing a female, who was not the victim, being dominated sexually. Maxwell stored this material in a folder on his phone titled ‘Things I will Do To You’.

Our Breaking News Alert will notify you of significant breaking news when it happens. Get it here.