After mixed messages last week from the UK government over the wearing of face coverings, the health secretary, Matt Hancock, announced on Tuesday they would be made mandatory in shops in England from 24 July.

The policy, which was introduced in Scotland on Friday, will be enforced by police, who have the power to implement fines of up to £100, but shop workers will be expected to “encourage” the wearing of face coverings.

The Guardian spoke to shop owners about their thoughts on the announcement.

“The word ‘mandatory’ is meaningless,” says 70-year-old Redmond Hanlon, who has owned his village convenience store in Devon for 35 years. “I’m not going to refuse entry to mask-free customers. I’ve got 80-year-old guys coming in first thing in the morning for newspapers. I’m not going to say, no, you can’t have your paper. These are guys I’ve known for years.”

Hanlon says most customers do not wear face coverings, but he has been handing out free masks to customers who want them. Last week, he installed a pedal-controlled hand-sanitiser dispenser at the shop entrance and a screen over the counter.

“I think government instruction might make a difference [to how many people wear face coverings]. I’m going to put up a sign thanking customers for wearing masks tomorrow, but I won’t do more,” Hanlon says. “My view is that it’s up to people how they get on with each other. By and large I like to let people do their own thing.”

‘It’s not just me being wacky. The government says so too’ 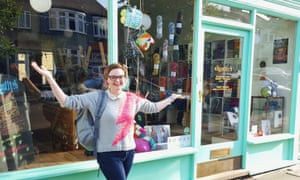 Rosie Fletcher is delighted face coverings will be mandatory from 24 July. She was already planning to ask customers to wear them in her north London shop, but the government’s announcement “means I have some more force behind it”, she says. “It’s not just me being wacky. I can say: ‘A-ha! The government says so too!’”

While Fletcher, 30, is concerned some people might become “really belligerent” if she asks them to wear a face covering, “I’m working on standing my ground and telling them calmly that if they don’t wear a mask, they can’t come in”.

Living with a number of autoimmune conditions, Fletcher is classed as extremely vulnerable and says it has been “absurdly difficult” trying to do business while protecting her health and the health of her staff. Her shop has been open two mornings a week for online order collections while they wait to see if the reopening of pubs and restaurants has an effect on case numbers.

Making face coverings compulsory, she says, will make her feel more secure. “Masks aren’t magic but when people wear them, it says to me that they’re taking the pandemic seriously.”

‘I can’t afford to turn away business’

Matthew, who runs a furniture shop in Cornwall, says he cannot afford to turn away customers after being closed for 12 weeks during lockdown.

“If I push people away from my front door, they’re just going to walk into my competitors,” he says. “I can’t afford to put my customers’ backs up. Boris Johnson is telling people to go back to the high street and shop, but I think this will put people off and turn them back to internet shopping, which we’re fighting against.”

While Matthew and his employees have benefited from a government grant and the furlough scheme, he says the future of the business is still uncertain, and he fears things “could get tougher”.

He also criticises the chancellor, Rishi Sunak, for setting a bad example by not wearing a face covering during recent trips, such as when helping out at a Wagamama restaurant.

“If you want retailers and customers to follow government policy, it would be helpful for government ministers to do it, right before they announce it as mandatory,” Matthew says. “Lead by example, and people will follow.”

‘It’s an excellent idea … but how do you enforce it?’ 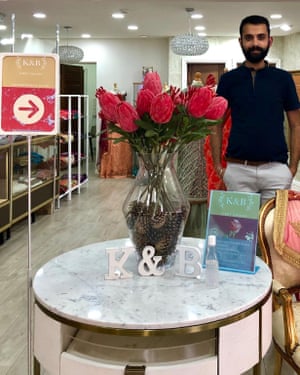 Encouraging shoppers to wear face coverings will be a balancing act, says Karan Sodhi, who runs a bridal store in Derby.

“I think it’s an excellent idea. It’s something we’d like to have in law so we can justify our decision to have face masks in store. But how do you enforce it?” he says. “If a customer comes in willing to spend a significant amount of money, but they don’t want to wear a face covering, what do we do? Do we jeopardise our own health and let them come in? [Or] are shop owners expected to take CCTV images to the police or call 999?”

Sodhi, 24, also wonders how the rules will be publicised. Many people in his community do not speak English as a first language, so he and his staff have been teaching customers about social distancing and hand hygiene. “Looking at the street now, nobody is wearing a face covering and I don’t see how that will change in a matter of days.”

Regardless, Sodhi’s store will introduce mandatory face coverings from Monday, before 24 July. “We don’t see the need to wait,” he says. Especially as there’s growing evidence wearing a face mask protects people.” 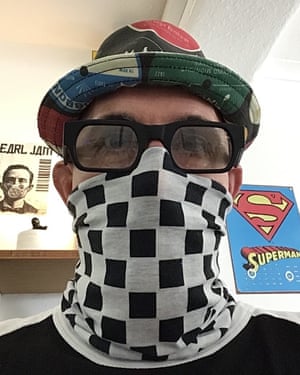 Crispin Willis, who runs a whole foods shop in the East Neuk of Fife, says that making face coverings mandatory in Scotland has massively increased customer confidence, and that fears about them deterring customers were, in his experience, unfounded.

“Before they were made mandatory, there were lots of elderly people wearing masks and feeling uneasy that others weren’t. We invested in screens over the counter, and everyone calmed down a lot. They paid for themselves tenfold in the business we’ve made because people feel more confident,” he says. “When we started wearing masks, it calmed down further.”

While Willis supports the measures, he thinks the policy of police enforcement is unrealistic.

“I’m going to remind people and put up posters, but the nearest police station is a 20-minute drive in an emergency,” he says. “It’s hardly an emergency if people aren’t wearing face masks, so I wouldn’t make that call. It’s a waste of police time.”