When a wild beast outmatches a wildebeest: Hyena tears its prey to pieces after bringing the animal down with swift, bloody attack

A lone Hyena has been pictured tearing an adult wildebeest to pieces after bringing the animal down with a swift and bloody attack in Kenya.

The gory but spectacular photo set shows a solitary hyena biting the hind legs of a fully-grown wildebeest before dragging it to the floor, savagely gnawing on its insides whilst the poor creature was still standing up; and the scavenger’s prey screaming in agony as it endures its bloody fate.

The brutal pictures were captured by Norwegian wildlife photographer, Tom Dyring, 71, who lives close to Oslo, on a recent trip to the Maasai Mara in Kenya. 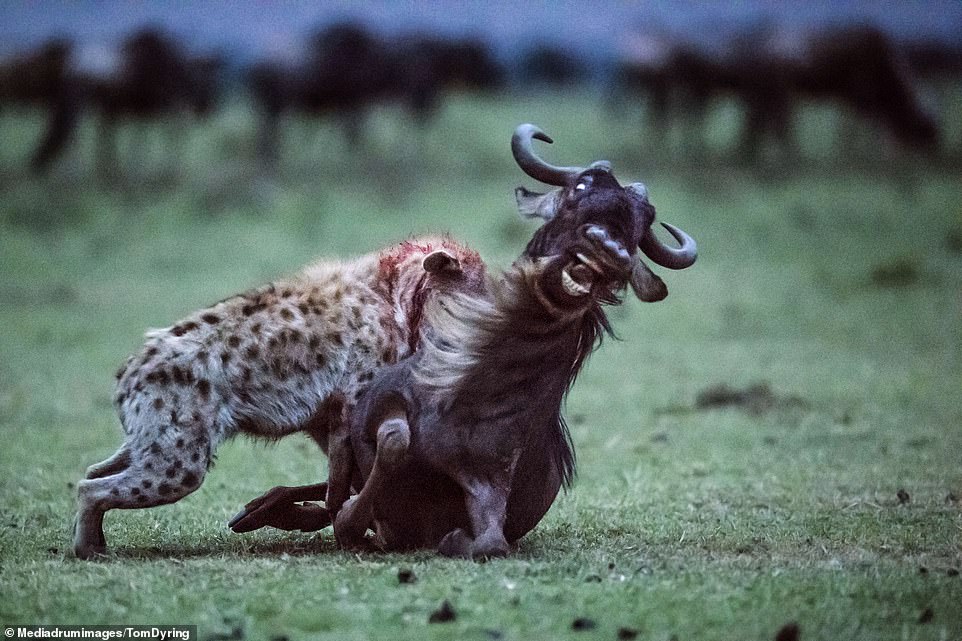 Pictured: This haunting image, photographed by Norwegian wildlife photographer, Tom Dyring, 71, in Kenya, shows a wildebeest letting out a bellow as it’s grounded by a vicious hyena 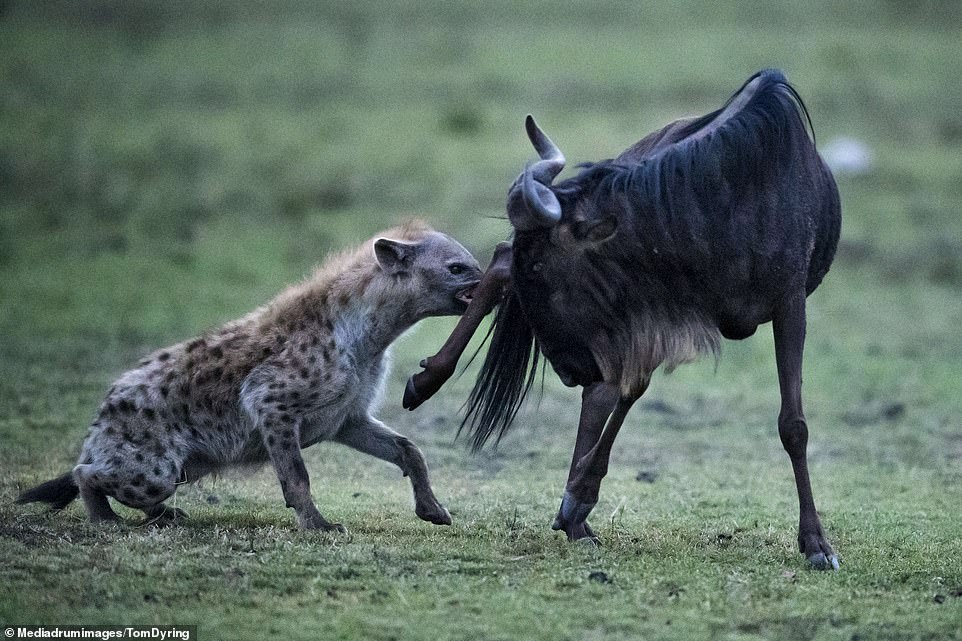 The wildebeest tries to boot away the persistent hyena after it latched on to its hind leg with its teeth in Maasai Mara, Kenya 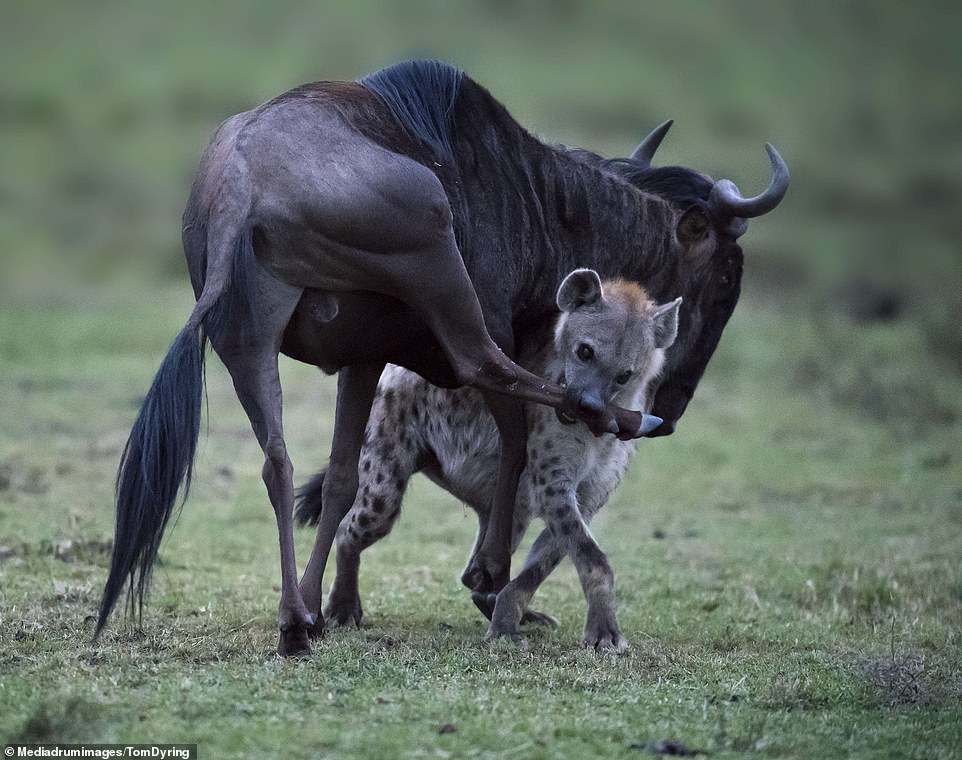 The wildebeest bucked but the determined lone hyena held fast. A solitary hyena weighs around 120lb, with the wildebeest usually weighing up to 600lb

The grisly encounter lasted for approximately 40 minutes and stunned veteran safari guides who had questioned whether a solitary hyena, which weighs around 120 pounds, could even takedown an adult wildebeest, which can weigh up to 600 pounds.

‘We couldn’t believe what we were seeing; a medium or rather small-sized spotted hyena had, for some reason, managed to grab a hold of one of the back legs of a full grown wildebeest – and was hanging on to it,’ recalls Dyring, who was an architect before he became a professional photographer.

‘The answer to the question ‘Can a single hyena take down big prey like a wildebeest?’ was going to be answered – and we had front row seats. 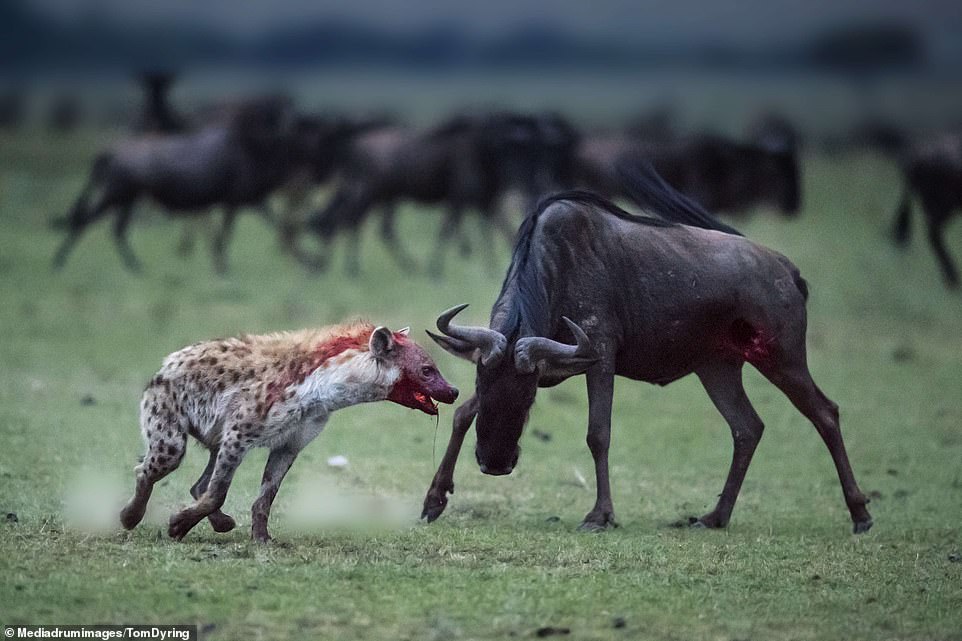 Remarkably, the wildebeest rallied for one last attempt to fight off its deadly attacker but its fate was already sealed. Spotted hyenas are famed scavengers and often dine on the leftovers of other predators

‘It turns out the answer was a resounding ‘yes’. The hyena tackles the wildebeest’s leg and brought it down – the hyena immediately goes for the soft part of its prey. The hyena seemed to know what to do and I think it had done it before. The wildebeest managed to get back on its feet but that didn’t stop the hyena tearing out its stomach as it stood there.

‘Despite its wounds, the huge wildebeest manages to get free and fights for its life but is soon tackled to the floor again. The hyena then attacks the animal’s other flank and you can see the wildebeest screaming.

‘The wildebeest seemed resigned to its fate after that although it continues to look towards us and below – it must’ve taken around fifteen minutes to die.’ 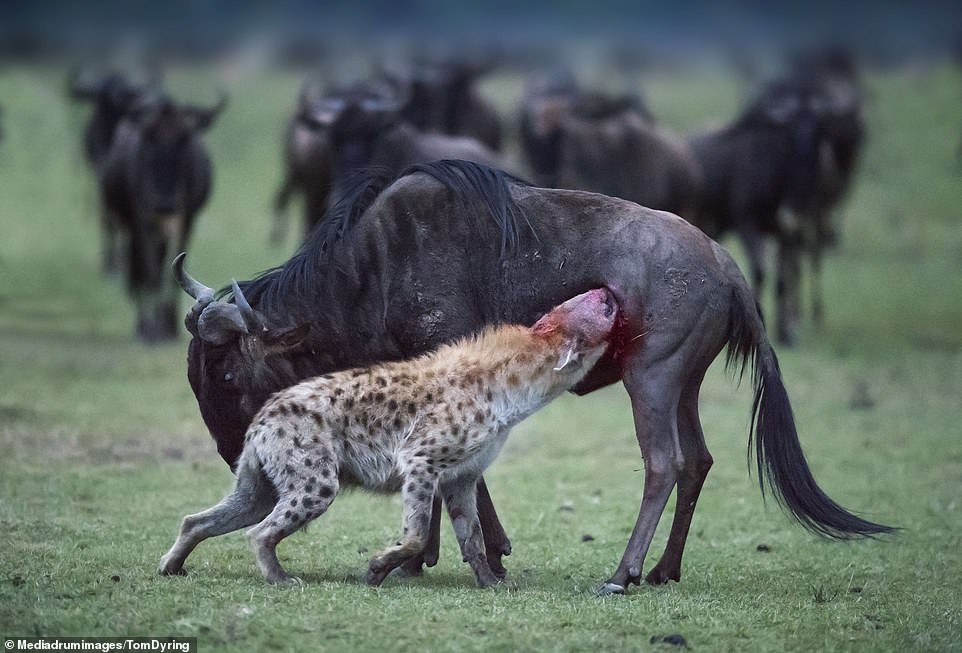 After tackling the wildebeest to the ground, the hyena managed to chew its way inside the wildebeest’s soft flank, before the struggling animal got back to its feet somehow 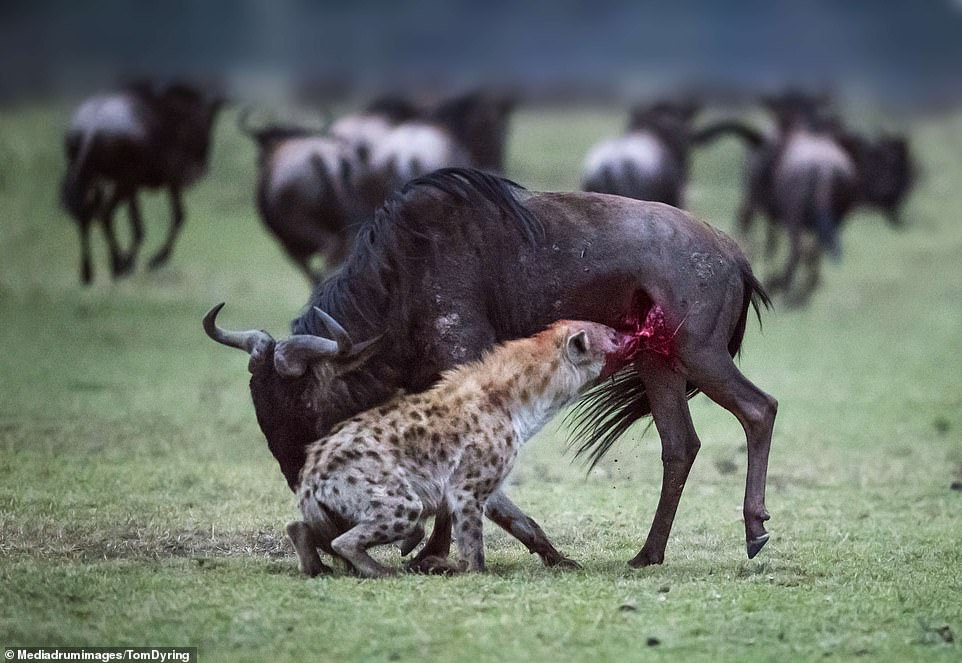 A graphic image shows the hyena tearing flesh out of its prey’s already open wound. The vicious predators are known to be skilled hunters that will take down wildebeest or antelope – though usually in a pack 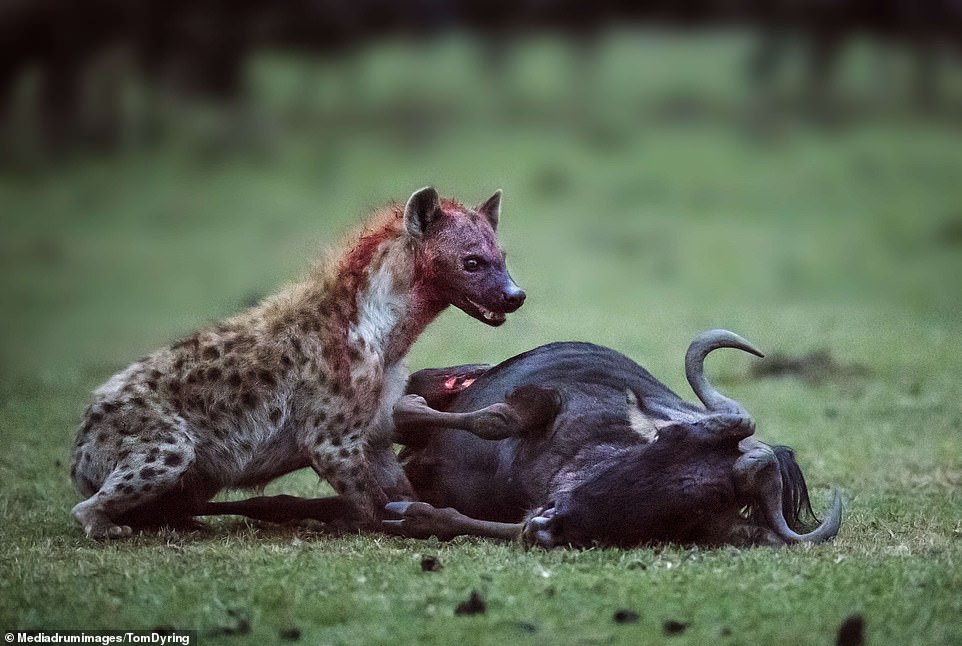 But soon the hyena tackled its prey to the floor again, chewing a second hole through its other side and bringing the mighty beast down

Spotted hyenas are famed scavengers and often dine on the leftovers of other predators. But these hardy beasts are also skilled hunters that will take down wildebeest or antelope – though usually in a pack.

Voracious eaters, the hyena will gorge itself when the opportunity presents itself. Certain tribes – such as the Maasai – leave the bodies of their dead out for hyenas to strip bare.

Although certainly not for the faint-hearted, Dyring was impressed by the hyena’s predatory instincts.

‘It was not a very nice experience and my empathy with the wildebeest was strong,’ admits the photographer. 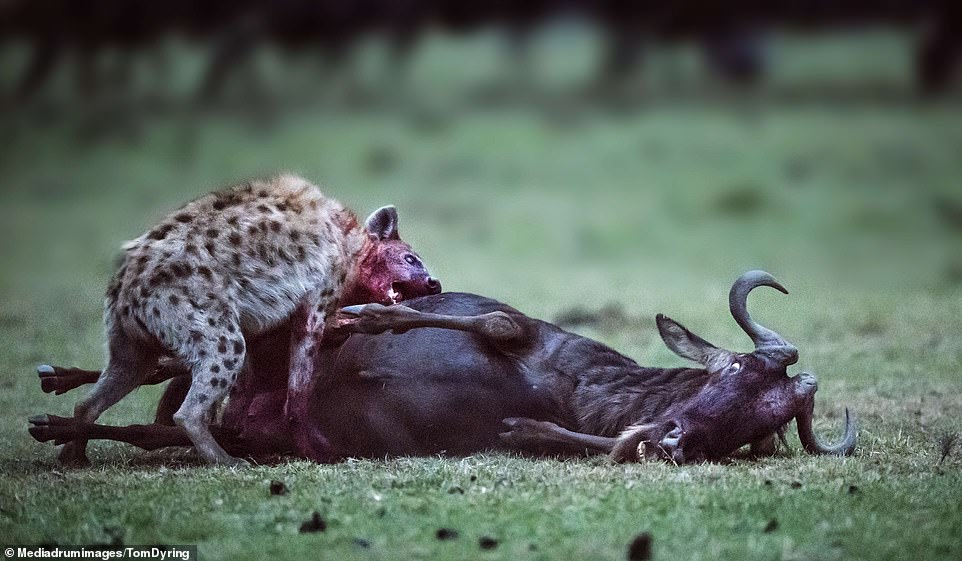 The wildebeest eventually dies, after a bloody battle against a far smaller foe. Dyring said: ‘The hyena is killing the only way it knows – and of course cannot feel compassion with the food. This is the reality for wild animals. Nature is totally unsentimental’

‘However, ’empathy’ is no winner in evolution, so it was a harsh reminder of simple rules of nature.

‘The hyena is killing the only way it knows – and of course cannot feel compassion with the food. This is the reality for wild animals. Nature is totally unsentimental.

‘It was an amazing sight to see, I would never have thought a hyena could manage to take down a fully grown wildebeest by itself.’