A hero commuter has been praised for coming to the rescue of an Asian woman who was being racially abused by a belligerent man on a train.

A disturbing six-minute video posted online on Wednesday shows a man in a white cap standing by a woman on a Sydney train to protect her from an aggressive man.

The offender can be heard repeatedly screaming ‘f**k off’ as the hero bystander blocks him from getting close to the innocent woman he is shouting at.

Alarmed passengers can be seen gazing towards the commotion, as the Good Samaritan cops the brunt of the racially-charged tirade. 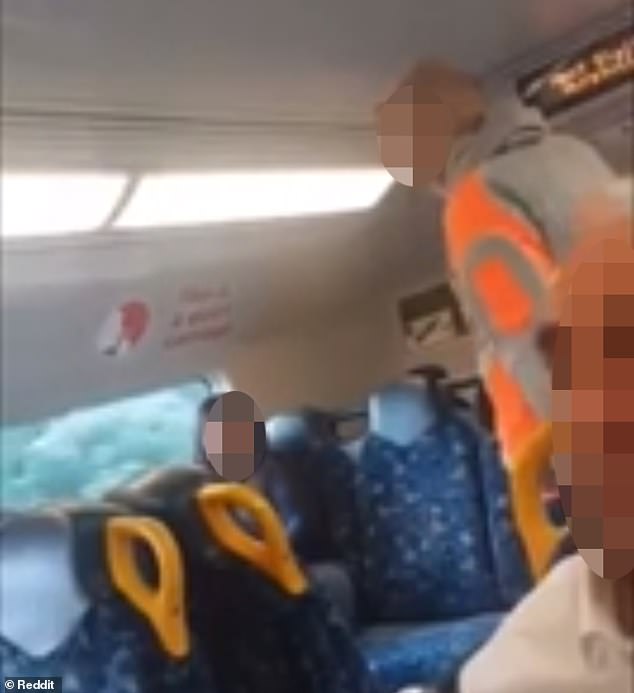 The man eventually barges past him to start abusing the woman as she sits quietly and alone.

‘Get back to Manila you piece of s**t,’ the man taunts, pointing his finger at her face.

Fed up, the man in the cap walks through the cabin towards the train’s emergency button, which he uses to contact transport NSW train staff.

But the antagonist launches a verbal attack on him, following the man down the stairway.

‘Where are you going maggot? Hero? Hero! Hero! the abuser yells.

The commuter can be heard speaking over the emergency line as the man, viciously attempting to distract from the call, spits on him before storming back into the cabin.

‘I’d rather you have a go at me than pick on some woman,’ the hero calls as the pair engage in a heated exchange.

The instigator then storms back towards the woman to continue berating her, with the commuter following to stand by to ensure her safety. 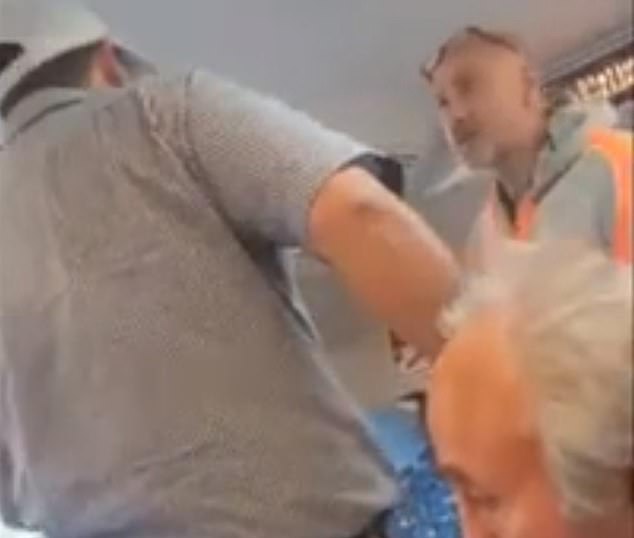 ‘I’m not a Filipino, I’m Indonesian,’ the woman responds.

‘I don’t give a f**k who you are,’ I’m bouncing the ball right here,’ the offender says.

‘Mate I’m happy to stand down here if you’re going to keep on intimidating the woman,’ the hero replies. ‘What are you going to do? Try and intimidate me? It’s not working is it?’

The hostile stand-off drags on for a further three minutes, with the pest flexing his fist and seizing up against him in a bid to intimidate before stealing his hat.

As the aggressor prepares to descend the train at Hurstville station, in the city’s south west, the defender pushes him down the stairs and collects his belonging.

The bully can be seen lying on the train’s floor, incessantly shouting abuse until the video cuts out.

Commentators were left outraged by the racist behaviour, with many applauding the commuter for standing up to protect the victim. 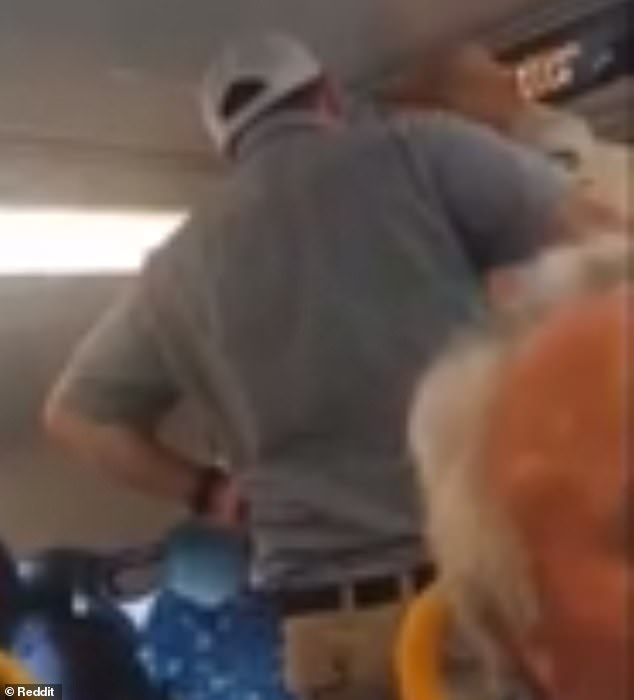 ‘Good job on the way the white cap guy handled the situation and reassured the lady. What a complete jerk the other dude was. Hoping he was charged and caught,’ one person wrote.

‘This made my anxiety spike. What makes them think it’s okay to be so horrible to other people,’ another comment read.

Someone else said: ‘sounds like he’s got some serious mental issue. Good on the guy with the white hat.

‘That was rage inducing. I hope that push down the stairs permanently broke something,’ a fourth person added.