‘Heartless’ burglars have raided a children’s hospice charity shop, closed due to the coronavirus pandemic, by smashing a hole in the store’s roof.

Charity bosses say raiders removed slates from the shop roof before gaining entry to the stockroom through the ceiling.

The aftermath of the burglary was discovered earlier this morning.

Though nothing was stolen, bosses from the charity shop, which has been closed since the government put the country in lockdown due to coranvirus, say the damage to the roof will cost around £1,000 to repair. 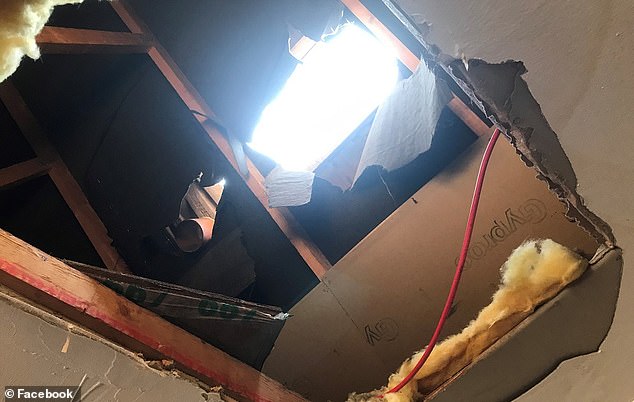 The burglars targeted the Derian House Children’s Hospice store in Chorley, Lancashire, by tearing through the shop’s roof 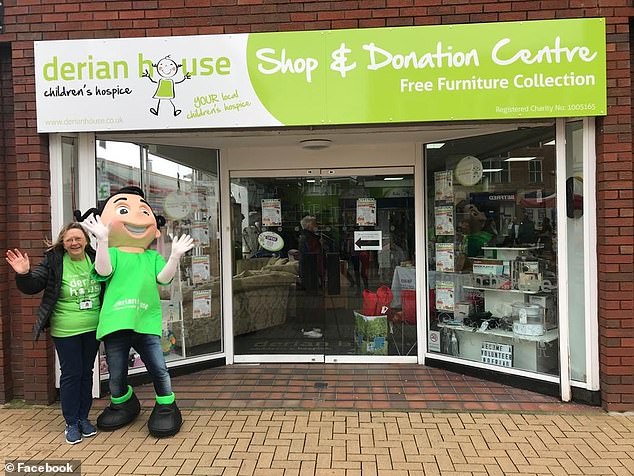 Derian House Children’s Hospice cares for more than 400 seriously ill children and young people from across the North West. Pictured: The hospice’s shop in Chorley which was targeted by burglars

He said: ‘The coronavirus outbreak has already meant that we have had to close our charity shops and cancel fundraising events, so to have to spend precious cash on repairing the damage done in this mindless act feels especially frustrating.

What is Derian House Children’s Hospice?

Derian House Children’s Hospice cares for more than 400 seriously ill children and young people from across the North West.

The hospice itself is based in Chorley, Lancashire, near to Chorley and South Ribble Hospital.

The charity says it ‘gives families the chance to make the most of every moment they have together’.

The charity relies on the public for more than 90 per cent of its funding, with running costs of around £4million a year.

To support the costs, the charity has three shops, which are based in Chorley, Layland and Horwich.

‘Something like this is heartbreaking for our wonderful team of volunteers who work tirelessly and donate their time to running our charity shops.

‘But, as ever, the local community have overwhelmed us with their support, with local roofers working nearby even offering to replace the missing slates free of charge.’

The charity first alerted members of the public to the burglary with a post on Facebook earlier today.

In the post, it said: ‘We’re heartbroken to have to tell you that our charity shop in Chorley has been targeted.

‘The break-in was discovered this morning and it appears that the burglars removed roof slates and gained entry into our stockroom through the ceiling.

‘Although we’d luckily removed all cash and high value items from the premises, the damage done by this mindless act will cost more than £1,000 of precious donations for us to fix.’

The social media post prompted hundreds of response, including some who slammed the burglars as ‘disgusting’.

One person to comment, Kay Robinsworth, said: ‘Disgraceful behaviour from these individuals. Unfortunately there are always some in today’s society.’

The post has prompted both anger and offer of support for the charity, which cares for more than 400 sick children each year

The charity was also flooded with offers of support, including from local roofers offering to fix the damage for free.

A Facebook fundraising page, called Riziah’s Fundraiser, set up by Naomi Moazzeny today, which aimed to raise £1,000 to cover the cost of the damage, has already raised £750.

The charity has asked anyone with information is asked to call Lancashire Police.