A cruise ship held off the coast of the United States after passengers tested positive for coronavirus will dock on Monday, but the US government has provided no guidance as to what will happen to Australians on board. 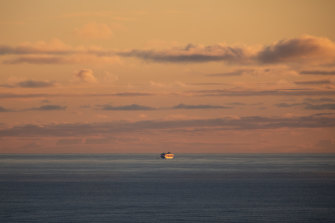 All at sea: The Grand Princess off the coast of San Francisco on Saturday as it awaited clearance to dock in the US.Credit:Bloomberg

The Grand Princess, which has more than 3500 other passengers and crew aboard, is due to dock in Oakland, on the east side of San Francisco Bay, after idling for days off the coast of San Francisco while officials debated where to send it.

The captain said passengers from California who don't require acute medical care will be sent to a federally operated isolation facility within California for testing and isolation. US guests from other states will be transported by the federal government to facilities in other states. 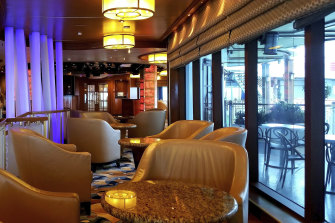 The public spaces on the Grand Princess are empty as passengers are quarantined in their cabins.Credit:Michele Smith via AP

He said while crew would be quarantined and treated on the ship, the US government had not given the cruise line any directive in terms of what would happen to foreign nationals – including Australians – on the ship.

Bill Pearce and his wife Karen are among four Australians stuck on the Grand Princess, which had been returning to San Francisco after a trip to Hawaii.

The couple have been on the ship for 16 days and, like other passengers, they have been quarantined in their rooms since Thursday.

Mr Pearce said he was concerned about contracting coronavirus following a spiralling infection rate after passengers on a similar vessel, the Diamond Princess, were quarantined off the coast of Japan in February.

"[We don't know if] the infection is spread by maybe the crew even giving us meals or through the air conditioning," he told the Seven Network.

"Certainly I would like to get out and get some fresh air, that's for sure."

Gold Coast dancer Kylie Chappell is known to be one of 1111 crew on board. Ms Chappell travels the world performing on cruise liners.

The Grand Princess had been forbidden to dock in San Francisco amid evidence the vessel was the breeding ground for a cluster of nearly 20 cases that resulted in at least one death after its previous voyage.

In an ominous sign, initial tests of just 46 people on the Grand Princess found 19 crew and two passengers had the virus.

US President Donald Trump said on Friday he would prefer the Grand Princess' passengers and crew to remain at sea rather than be allowed to dock on the mainland.

This is despite the virus spreading on the Diamond Princess cruise ship when it was quarantined off Japan. Experts have been scathing in their analysis of ships being used as quarantine sites.

In a statement, DFAT said US authorities were testing everyone on board, and that Australian officials were waiting for advice as to whether any Australians had contracted the virus.

Australian consular officials in San Francisco were on hand to provide assistance to Australians on the ship, it said.