A British couple have told how their £11,000 cruise from hell on the Grand Princess where 21 passengers caught coronavirus ended with them being airlifted back to the UK on a windowless cargo plane where ‘air stewards’ wearing hazmat suits served them sandwiches and bottles of water.

Denise and Len McConkey say they and 100 other passengers endured a ‘truly terrifying’ flight back to the UK – as six passengers with confirmed Covid 19 were on board and kept in a metal box in the cargo hold and they were barked at by cabin crew using a megaphone.

Speaking to MailOnline back home in London where they are self-isolating until March 25, Denise said passengers from the California cruise were loaded onto a jumbo cargo plane after disembarking and were met at the airport by ‘frightening’ federal agents wearing protective clothing. 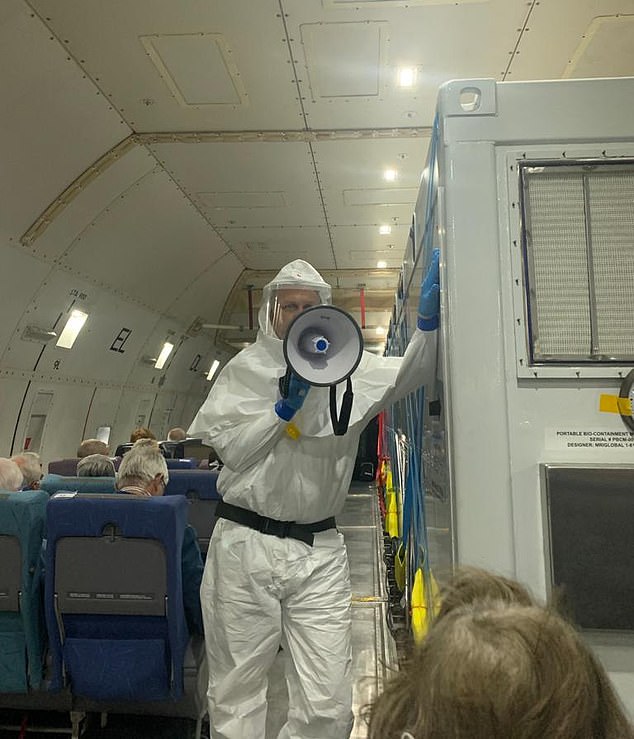 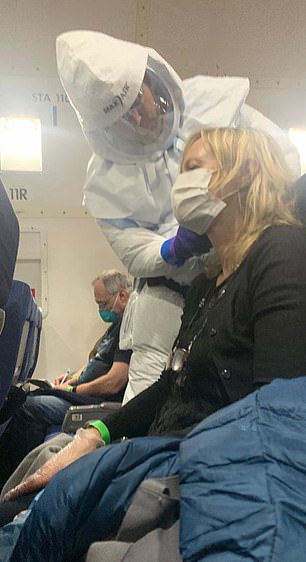 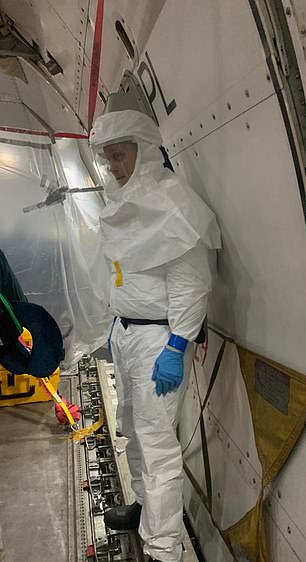 Passengers are fitted with face masks on board the 10-hour ‘flight from hell’ where they were served sandwiches, salads and bottles of water on their way back to the UK 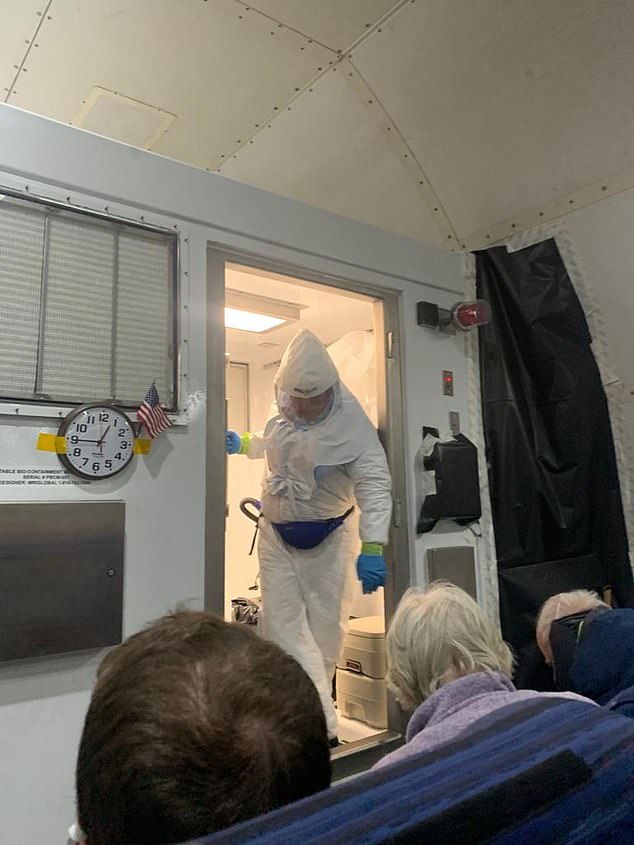 Up to 100 holidaymakers from the cruise were flown back to the UK from California to Birmingham where they were served sandwiches, salads and bottles of water on plastic trays 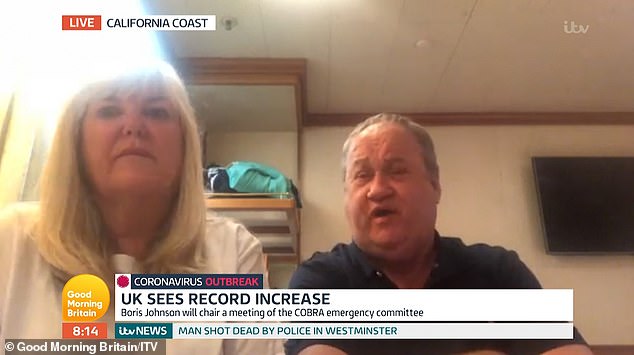 Denise and Len McConkey, of London, told MailOnline of their terrifying flight to Birmingham. They got a taxi the rest of their journey back to London and enjoyed a meal at McDonald’s

‘It was truly terrifying,’ said Mrs McConkey. ‘We were met at the plane by these federal agents all dressed in hazmat suits. It was like that scene in ET.

‘We boarded but there were separate areas for those who had been diagnosed with the virus, those thought to have it and us other passengers.’

Mrs McConkey, who runs a mini cab firm in Elton, south London, said an agent told them the plane belonged to a friend of President Trump who had called in a favour to transport the passengers.

‘It had no windows and the inside was just bare with these seats clamped onto the metal interior.

‘They spoke to us with this scary megaphone – no tannoy or anything and there were loads of places on the bare interior where you could trip up which wasn’t ideal for the many elderly travellers.

‘It was like we were cattle or something. My dad was so frightened he didn’t eat or drink for the whole time. It was a 10-hour flight and it was just exhausting.

‘No-one knew where we were going or where we’d be landing – in fact when we touched down we were told we were in London but we were in Birmingham. The organisation was a shambles and no-one really seemed to know what they were doing.’ 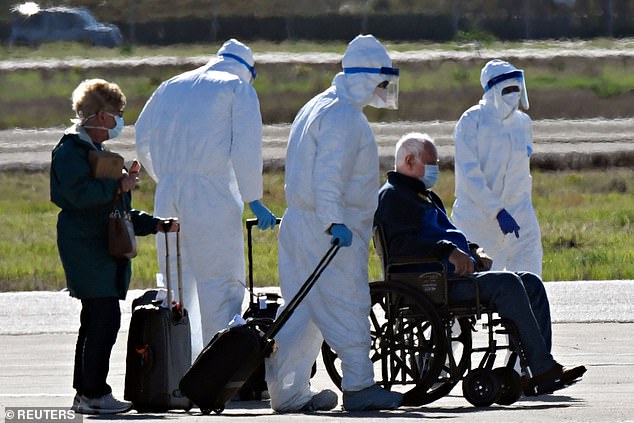 Passengers are led on the tarmac at Oakland, California, where they then boarded a cargo plane that had reportedly been loaned to Donald Trump as a favour from a wealthy associate 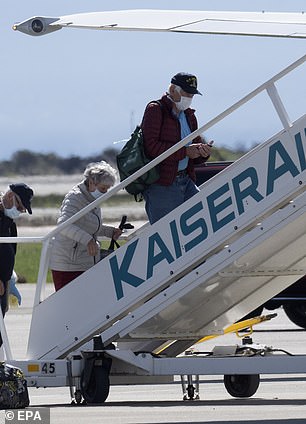 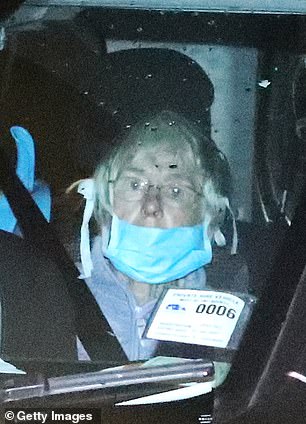 Brit passengers wearing facemasks board the flight (left) and a female passenger (right) is driven to the airport in Oakland, California. Six confirmed cases flew back to the UK with them 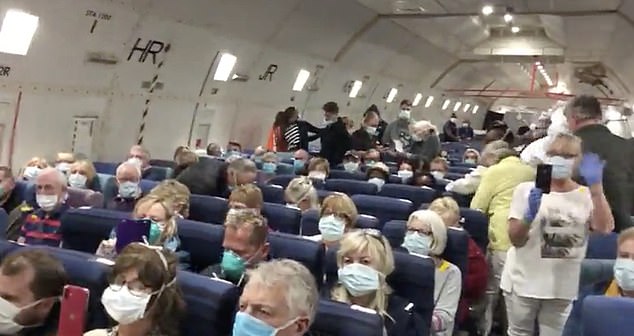 The McConkeys said those with coronavirus were shuffled on board before everyone else and shut in a metal box marked with a biohazard sign.

Mrs McConkey said: ‘We couldn’t see inside the box. There was a big metal door with a swing handle, a bit like a large meat fridge. There was another door on the inside so you couldn’t see what was going on.

The agents in suits went in to see them.

‘We thing that there were six people inside because they all had to fill in a form and an agent came out with six forms in his hand. 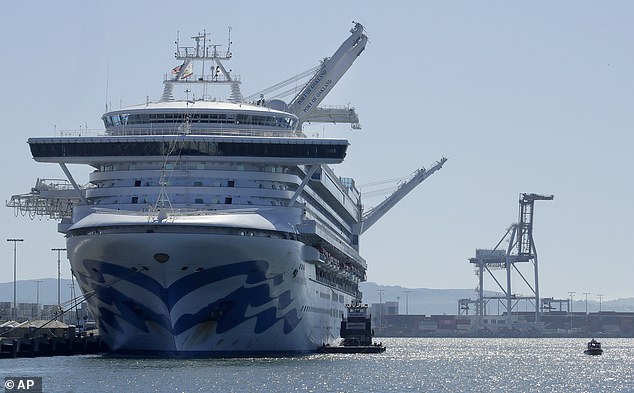 The ship, which holds 3,500 passengers, had been circulating the Californian coast since March 5 after the first virus cases were confirmed. They finally disembarked on Tuesday 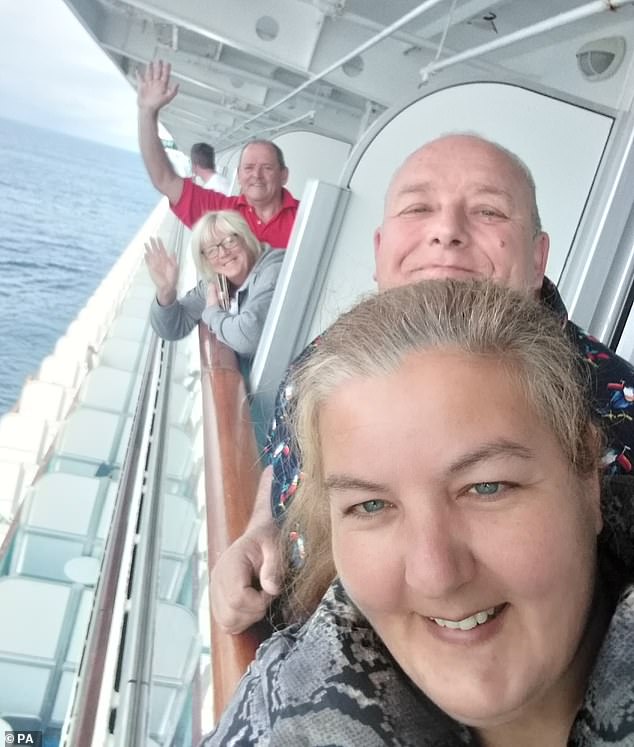 British holidaymakers Justine Griffin, from Leicestershire, had been is travelling with her husband Dave and friends had previously said she would be bottom of the list to disembark

She went on: ‘The cabin crew didn’t really act as such. They were just five men in suits. They gave us sandwiches, salads and water on a plastic tray, but you had to look after yourselves.

‘There was no safety briefing at all. A man with a megaphone said: ‘You all know how to use a seatbelt so let’s put them on.’

‘He told us that if a blue light flashed then we should all return to our seats as it meant we were hitting turbulence. It was very worrying as we’re all used to a safety briefing on board a plane.

‘Luckily there was no turbulence – the first we saw of the blue light was when we were coming down to land. We didn’t know we were landing because there were no windows. It was very disorientating.’

The McConkeys who were confined to their ship cabin for several days have now been told they have to self-isolate for a fortnight and they have had to send their two daughters out of the house.

‘One is staying with a friend but the other has had to go to a hotel. It’s been a nightmare and one I hope we never experience again.’

Mrs McConkey, her father and stepmother Edwin, 82 and Jean, 78, and her husband Len, 66, had booked the holiday of a lifetime – 15-night cruise from San Francisco to Hawaii and back – at a cost of around £11,000. But on the return leg from Hawaii passengers began to go down with coronavirus and were eventually told to confine themselves to their cabins.

Mrs McConkey said: ‘It was an utter nightmare from start to finish. From the moment we were confined to our cabins on the Princess Grand it was a shambles of organisation. 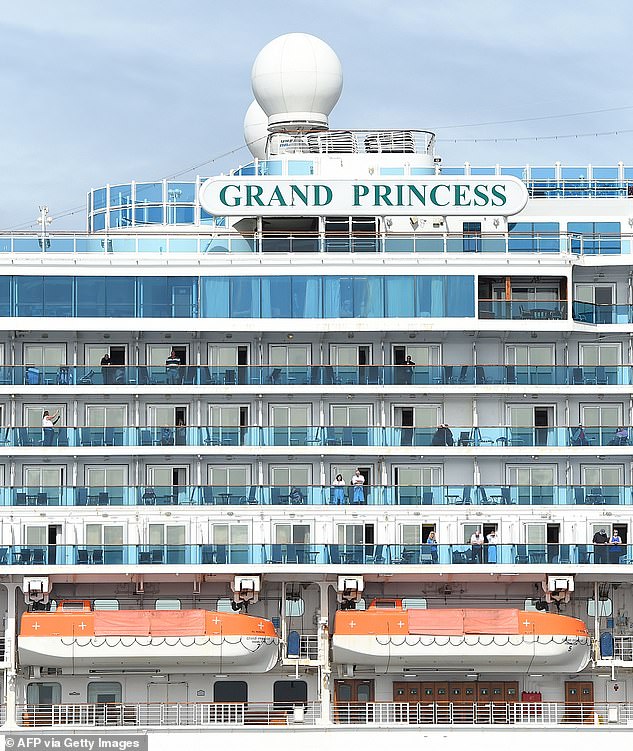 The Grand Princess docked in nearby Oakland, California, on Tuesday, and was expected to initially only allow sick people and Americans off, who will be quarantined before others leave

‘I can only imagine what it’s like to be on a prison ship but I’m pretty sure it’s similar to what we experienced. ‘It was ridiculous because we couldn’t get food and drinks. If you asked for a cup of tea is would take six hours to get to you. The crew were clearly struggling to deal with the situation.’

After circling for days after being forbidden to dock at San Francisco they disembarked in Oakland and were transferred to a cargo plane.

Following their ordeal, all the passengers were driven home in separate taxis.

Mrs McConkey said: ‘I was pleased about that. The taxi took us all the way home and we stopped off on the way to pick up a McDonald’s – that was our first meal back. We were all starving hungry.’

She added: ‘We’re all so relieved to be back. It was a total nightmare and so exhausting. We’re just so pleased to be back in Britain sleeping in our own beds again. Thank goodness it’s over.’