Police in Georgia released dashcam video of a suspect firing at officers with an AK-47 rifle during a high-speed chase earlier this week that left three officers injured, one suspect dead and another in custody.

The video shows a patrol car carrying two deputies speeding toward the location where a police officer had been shot multiple times inside his cruiser early Monday. When the deputies reach the stopped police vehicle, a man on the roadway approaches and fires multiple rounds with the assault rifle, disabling the deputies’ car.

Deputy Jay Repetto was struck once in the arm inside the cruiser, the Carroll County Sheriff’s Office said. Both he and Cpl. Jamison Troutt returned fire, killing the suspect at the scene.

“If not for the heroic efforts of all Officers and agencies involved and to Corporal Troutt and Deputy Repetto for stopping the suspect, this incident could have resulted in more Officers being injured or killed and the suspects could have posed an even bigger threat to the public as this occurred in a residential area, and at this time of the morning, people are getting ready for work and staff is getting ready to arrive at the school,” the sheriff’s office said in a statement. 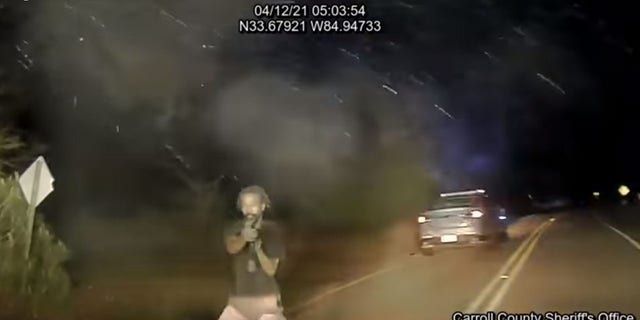 The suspect who fired at officers with the AK-47 rifle was later identified as 28-year-old Pier Alexander Shelton. He was killed at the scene after officers returned fire.
(Carrollton County Sheriff’s Office)

The situation unfolded just after 3:30 a.m. Monday when a Georgia State Patrol trooper attempted to stop a car for speeding at 111 mph on Interstate 20. The two suspects inside the car sped off, firing at officers during a high-speed chase that involved several law enforcement agencies.

Along with Repetto, the other wounded officers were identified as Carrollton Police Sgt. Rob Holloway and Villa Rica Police officer Chase Gordy.

Repetto and Gordy were both treated and released from the hospital Tuesday evening, FOX5 Atlanta reported. Holloway remained in intensive care at Grady Memorial Hospital.