More than 100 suspected street racers have been taken into custody in Georgia after police surrounded them inside a parking lot and deployed spike strips to prevent their escape.

The Clayton County Sheriff’s Office says the arrests happened early Sunday morning following its response to calls about cars performing stunts outside a Sam’s Club store in Morrow, near Atlanta. A total of 75 adults were hit with charges including loitering, prowling and possession of a firearm under 18, while the parents of 27 juveniles were charged with curfew violations.

“Of course, some tried to leave, driving over sidewalks and medians attempting to flee,” Officer Aubriel Stroud said. “But, no worries, we got them, too.” 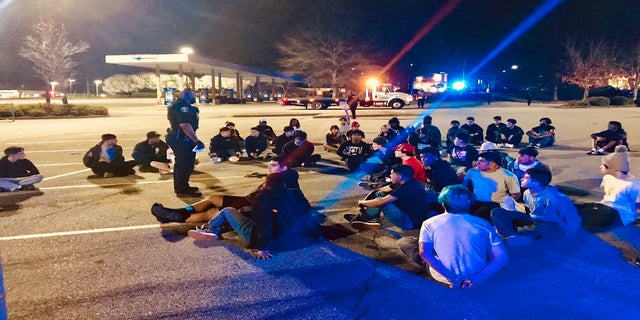 Stroud added that 48 vehicles were impounded and four firearms were seized.

The identities of the suspects were not revealed, but they appeared to be young, according to a picture released by the Clayton County Sheriff’s Office.

Law enforcement that arrived on-scene decided to “strategically block off every exit available for the racers and deployed spike strips to flatten their tires if they decided to run,” according to a statement from the Clayton County Sheriff’s Office.

“Once closing off all areas of escape, deputies and officers went from car to car and arrested all … of the street racing crew,” it continued.

Police also said in the statement that “reading is fundamental”.

“However, when you drive too fast it is hard to read the warning signs posted at the entrances of Clayton County giving those intent on breaking the law the warning that it might be wise to turn around,” it said.