Georgia Gov. Brian Kemp repealed a Civil War-era state citizen’s arrest law this week, signing new legislation more than a year after the death of Ahmaud Arbery, a 25-year-old Black man pursued by White men who suspected him of a crime in their neighborhood.

Kemp, a Republican, signed on Monday House Bill 479, which, in part, revises the grounds for an arrest by a private person by ending the right for bystanders to make an arrest in Georgia if a crime is committed in their presence “or within their immediate knowledge,” FOX 5 Atlanta reported. It keeps protections for business owners to detain individuals suspected of theft until law enforcement is contacted.

“This bill makes Georgia the first state in the country to repeal its citizen’s arrest statue,” Kemp said Monday before signing the measure. “Today we are replacing this Civil War-era law, ripe for abuse, with language that balances the sacred right of self-defense of person and property with our shared responsibility to root out injustice and set our state on a better path forward.”

Those who had pushed for the repeal said the law was approved in 1863 to round up escaped slaves and was later used to justify the lynching of African Americans. Outcry over Arbery’s shooting also pushed lawmakers last year to pass a new hate crimes law in Georgia, more than 15 years after the state Supreme Court overturned an earlier law.

Arbery, then 25, was fatally shot while running through a neighborhood near Brunswick on the Georgia coast in February 2020. His 27th birthday would have been days ago, and his mother, Wanda Cooper-Jones, said she viewed the law as a birthday present to her son.

“I think the signing of this bill will make people think before they take action into their own hands,” said Cooper-Jones, who witnessed Kemp sign the new law at the Georgia state capitol in Atlanta. “Unfortunately we had to lose my son in this manner. Had this bill been in place, I think it will protect young men as they are jogging down the street.” 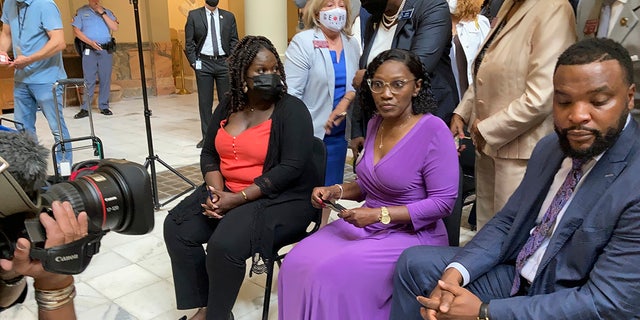 Greg McMichael and his adult son, Travis McMichael, armed themselves and pursued Arbery in a pickup truck after he ran past their home on Feb. 23, 2020. A neighbor, William “Roddie” Bryan, joined the chase and took cellphone video of Travis McMichael shooting Arbery three times at close range with a shotgun. All three men are scheduled to appear before a federal judge Tuesday on hate crime charges.

The father and son who pursued Arbery weren’t arrested or charged until the state took over the case more than two months after the shooting. A prosecutor initially assigned to the case had cited Georgia’s citizen’s arrest law to argue that the shooting was justified. Lee Merritt, the family attorney, said Arbery’s relatives continue to want to see that prosecutor criminally charged.

State charges of malice murder and felony murder, two counts of aggravated assault and one count of false imprisonment, and criminal attempt to commit false imprisonment are still pending against the three defendants, and a Georgia judge has set a trial in the state’s case for October and will hear pretrial motions later this week. Issues surrounding citizen’s arrest could be aired in pretrial hearings.

Under the repeal bill, people who are mere bystanders or witnesses generally no longer have the right to detain people. Deadly force can’t be used to detain someone unless it’s in self-protection, protecting a home, or preventing a forcible felony. The changes retain Georgia’s “stand your ground” law, which says a person who is being threatened isn’t required to retreat.

It still allows business employees to detain people they believe stole something and lets restaurant employees detain people who try to leave without paying for a meal. It also lets licensed security guards and private detectives detain people. Someone who is detained must be released along with their personal belongings if a police officer or sheriff’s deputy doesn’t arrive within a reasonable time.