A bodybuilder from Geelong who played a young Arnold Schwarzenegger in a film biography has been charged with affray, criminal injury and possession of drugs, including cannabis, ice and testosterone, a court has heard.

Calum von Moger, 31, appeared at Melbourne Magistrates Court on Monday via video link, but was not required to enter a plea. 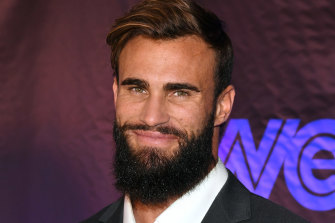 He was charged with being in possession of testosterone, a drug used by bodybuilders to increase their strength, as well as methamphetamine and cannabis on January 31.

He was also charged with being in possession of the drugs Proviplex, which can boost testosterone and Viaplex, which is used to treat erectile dysfunction. A further charge related to driving a car without number plates in Melbourne’s CBD. 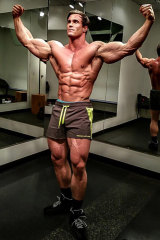 In court, defence lawyer Bernard Campigli said Mr von Moger had also been charged with affray and criminal injury in relation to a separate incident in January.

This was Mr von Moger’s first court appearance after he was released from remand on bail. The case was adjourned until May 26 and Mr Campigli successfully applied to have Mr von Moger’s bail conditions changed, so he could live with one of his brothers.

Mr von Moger, who is 188 centimetres tall, and weighed 112 kilograms at his peak, has 3.2 million followers on Instagram and is known as Schwarzenegger 2.0 in bodybuilding circles.

He is one of six siblings who grew up with his parents of Dutch and Austrian heritage on a hobby farm in central Victoria before moving to Geelong when he was eight.

He started at the gym to keep pace with his older brother and took it up as a profession after trying his hand at joining the army, skippering yachts, animal husbandry, landscaping, lifesaving and adventure tour guiding.

The bodybuilder is a three-time winner of the World Fitness Federation Mr Universe title. He won the WFF junior Mr Universe in Austria in 2011 and the amateur Mr Universe in 2014 in South Korea, which spurred him to move to Los Angeles in 2014 to further his career where he was funded by sponsors, endorsements and started his own clothing brand.

In 2015 Mr von Moger won a pro-bodybuilding card at the WFF Universe event, staged in La Ciotat on the French Riviera.

“I got to a point where I wanted to create my own legacy. I wanted to introduce my style of body building and fitness and I wanted to motivate younger kids,” Mr von Moger said in a 2015 interview.

He appeared in the bodybuilding documentary Generation Iron 2 in 2017 before portraying a young version of his idol, Arnold Schwarzenegger, in the 2018 film Bigger, which documented the rise of the bodybuilding industry in the US in the 1970s and 1980s.

And in 2019 Mr von Moger appeared in his own Netflix documentary Unbroken, which charted his comeback from a bicep tear injury.

He returned to Australia several months ago during the pandemic.