Malmo: Sweden is to limit gatherings in the country to a maximum of eight people in what Stefan Loefven, the prime minister, described as "an extremely interventionist measure which has no equivalent in modern times".

The new tougher approach brings the Scandinavian nation – which in the spring imposed the lightest restrictions in Europe – closer to a lockdown than at any time in the pandemic. 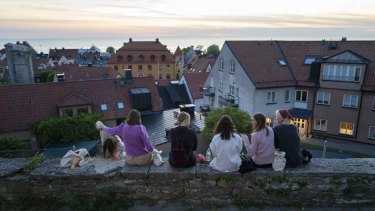 Limited to groups of eight: people sit along a street in the town of Visby in Gotland, Sweden. Credit:Getty Images

Those arranging public events for over eight people will face fines or even imprisonment, while those holding private gatherings are strongly recommended to stay below the threshold.

"There should be no social situations with more than eight people, even if they are not formally covered by the law," Loefven said at a press conference yesterday.

The new limit will come into force on November 24 and is initially expected to apply for four weeks, but in a press release the government said it was ready to extend the recommendation over Christmas and the new year if necessary. 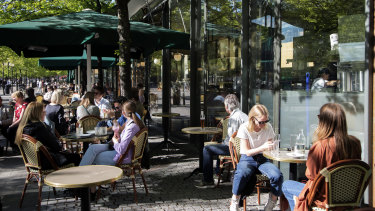 People sit at tables outside a cafe at Kungstrdgrden in Stockholm, Sweden.Credit:Bloomberg

Loefven said that adherence to the new restrictions was essential if the current surge in infections was to be brought under control.

"This is going to get worse," he said. "Do your duty, take your responsibility to stop the spread."

The number of people testing positive in Sweden hit a new daily record of 5990 new cases on Friday, with the number of positive diagnoses rising by about 50 per cent a week.

The country's public health agency began rolling out "general local recommendations" to the most hard-hit regions from the middle of last month, but Lena Hallengren, Sweden's health minister, said that the recommendations, which were far-reaching but not backed by law, had not been sufficiently widely followed.

"Over recent weeks, the recommendations have been sharpened and strong measures have been taken. Despite this, behaviour has not yet changed enough to turn the direction of the development," she said. "The curves are still going in the wrong direction."

The new measures should not be interpreted as being the beginning of a hard lockdown of the sort in place in Britain and several other European countries, Loefven said. "We do not believe in a total lockdown, we believe that the measures are putting in place are the right ones," he said.