Britain’s leading psychology body has been criticised for encouraging psychologists to call their clients ‘sluts’ if they request it.

In guidelines aimed at encouraging more inclusive language, the British Psychological Society (BPS) told its 60,000 members to refer to patients using their ‘preferred term’, including so-called ‘reclaimed terms like dyke or slut’.

But health professionals and members of the public have attacked the move, saying the word was inappropriate and derogatory.

Australian psychotherapist Tania Marshall described the BPS advice as a ‘mess’ and questioned if there could ever be a situation where ‘referring to your client as a slut would be therapeutically beneficial’.

She tweeted: ‘Surely we would want to explore where that came from, why they came to that term, why they use it, what it means for them and any background related to it, rather than just affirming it?’

In a response to Ms Marshall, the official BPS Twitter account claimed the word ‘slut’ had been ‘reclaimed by feminist activists’.

It said: ‘The use of preferred terminology is long established psychological/ psychotherapeutic practice & is in line with guidance… We only advocate the use of reclaimed terms e.g. slut where it is the client’s preference (as is clearly stated in the guidance).’

The statement sparked a furious response on social media, with one doctor accusing BPS officials of having ‘lost their minds’. 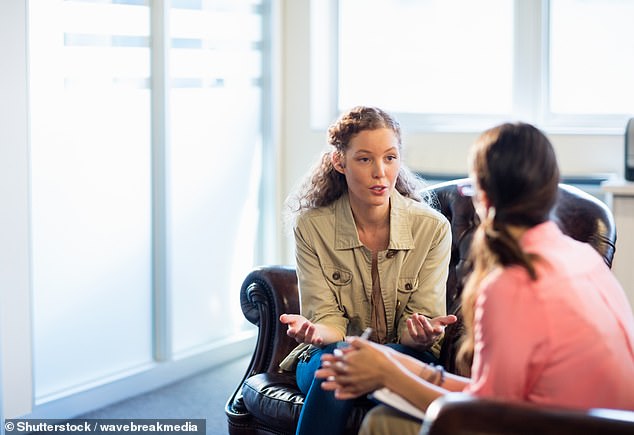 In guidelines aimed at encouraging more inclusive language, the British Psychological Society told its 60,000 members to refer to patients using their ‘preferred term’, including so-called ‘reclaimed terms like dyke or slut’

Describing the guidance (pictured) as ‘a mess’, Australian psychotherapist Tania Marshall questioned if there could ever be a situation where ‘referring to your client as a ‘slut’ would be therapeutically beneficial’

They added: ‘Two scenarios in which a patient might demand a HCP [healthcare professional] refer to them as “slut” — a traumatised woman or a male fetishist.

‘In either scenario it is unacceptable. Also, clinicians have no obligation to debase themselves by indulging insulting language.’

Feminist psychologist Dr Jessica Taylor claimed the word had ‘definitely not been “reclaimed”.

‘It is actively used to oppress, we have decades of psych research to show that, and psychologists should never ever, ever refer to their clients as a “slut” no matter what,’ she added.

WHAT DO THE BRITISH PSYCHOLOGICAL SOCIETY GUIDELINES SAY?

The British Psychological Society, which represents around 60,000 psychologists in the UK, released guidelines in 2019 which advises its members to call their patients a ‘slut’ or ‘dyke’ if requested.

The guidelines state: ‘Clients may use many different terms to refer to their identities and practices and psychologists are advised to use those that are used by clients themselves or to ask which terms are preferred.

‘Some people do not use GSRD or LGBTQ (lesbian, gay, bisexual, transgender and queer) labels, but may be comfortable with, for example, MSM (men who have sex with men), WSW (women who have sex with women), culturally specific terms, or reclaimed terms like dyke or slut.

‘A client’s preferred name and pronoun should be used in person and, in almost all cases, in documentation.

‘These may be gendered (he or she) or if the client prefers, gender-neutral (they, or the client’s preferred gender neutral term).

‘Similarly, psychologists should use the client’s preferred term for their relationship and understand how they define it.’

Psychotherapist Dr Richard Gipps said it was the job of therapists to explore whether a patient’s view of themselves was healthy or toxic, rather than just accepting it.

Former counsellor Laura Marcus added: ‘If I had a client with anorexia I would not affirm that they were overweight and I certainly wouldn’t call them fatty even if they called themselves that and said that’s how they wanted to be called!’

While radical feminist Angie Jones tweeted: ‘Any therapist telling a client to embrace a sexist slur or using it toward a client should be struck off.’

In a discussion about the issue on parenting forum Mumsnet, one woman wrote: ‘I would have thought that if a woman came to a therapist insisting she be called “slut”, the therapist should be trying to find out why.

‘I can see — maybe — a group of women friends jokingly using the term. But in a therapist’s office? Unprofessional is the kindest word I can use.’

Another questioned why the BPS had listed derogatory words for women but not for men in its guidance, describing the terms as ‘misogynist’.

The BPS’s ‘Guidelines for psychologists working with gender, sexuality and relationship diversity’ were first published in 2019.

But the controversial content came to light last week after it tweeted a link to the document and encouraged members to: ‘Make it your New Year’s resolution to be more inclusive of gender, sexuality & relationship diversity.’

Last year it was reported that the BPS was under examination by the Charity Commission over concerns about its governance, lack of transparency and claims it silenced certain academic views.

It was also accused of allegedly lobbying for psychologists to be allowed to prescribe drugs, including hormone blockers to transgender patients.

A BPS spokesperson said: ‘Our Guidelines for Psychologists Working with Gender, Sexuality and Relationship Diversity were put together by experts working in this field and were subject to extensive consultation with all BPS members in 2019.

‘The BPS is clear that it is down to the practitioner’s professional judgement to determine if the client is using terms, that could be considered derogatory, in an empowering way rather than in a self-loathing way that may be detrimental to them.

‘In this case, we should have been clearer in our tweet that we do not believe this term has been universally adopted by all feminists.

‘However it is important to recognise that for some people, reclaiming phrases that many consider to be derogatory, is a form of empowerment.’