The navy will try to refloat its $10 million patrol boat. HMAS Wollongong, at dawn today at high tide.

Navy divers guided by a private salvage contractor, worked throughout the night to prepare the badly holed 42-metre ship for the rescue attempt. 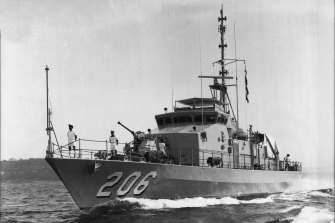 But an overnight gale, forecast for eastern Victoria, could force the ship, wedged on a reef, further on to the rocks, negating 48 hours of intensive salvage work.

The Wollongong ran aground on the north-west tip of Gabo Island at about midnight on Friday. The navy has refused to comment on the possible cause until a board of inquiry is held. It is to begin in Sydney this morning.

The impact broke both the Wollongong’s propellers, its three rudders and bent its propeller shaft.

A navy spokesman in Sydney, Commander Goof trey Morton, said the Wollongong had an extensive hole in its right side. The engine room and much of the magazine, which contained ammunition for the boat’s 40-millimetre Bofors gun, were flooded and safe, he said.

The Gabo Island lighthouse keeper, Mr Chris Richter, said the light on the island was working at the time. 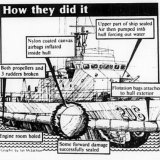 First published in The Age on June 4, 1985.Credit:The Age Archives

The man who has run the salvage operation since early Saturday morning, Commander Mike Webster, said: “We are in a better shape than we were previously. We have a good opportunity to salvage her if the weather stays down.”

The navy’s fleet commander, Rear-Admiral Ian Knox, said on Saturday that the Wollongong had hit the reef as it was taking shelter behind Gabo Island from a squall in Bass Strait.

A weather bureau spokesman said the weather would worsen today with 30 to 40 knot winds.

Commander Webster said if the Wollongong were freed today it would be either towed to Eden, or beached on sand at Gabo Island to allow more work to be done.

Yesterday men concentrated on plugging leaks in the stern with epoxy resin and pumping water out. Earlier the crew’s personal belongings had been removed and other electrical equipment had been stripped from the ship to give it more buoyancy. It was floated further last night with air flotation bags wrapped on each side which gave divers more room to plug holes in the stern.

Sea King helicopters ran shuttle services from Mallacoota airport to the island for most of yesterday, flying salvage equipment in, and taking material from the Wollongong to shore. Sailors from HMAS Launceston and HMAS Curlew, anchored just off the island, worked to strip the Wollongong of its equipment.

Meanwhile, the Federal Opposition claimed that the grounding of the Wollongong called into question the effectiveness of the entire navy fleet.

The Opposition defence spokesman and National Party leader, Mr Sinclair, said from Darwin that a navy with ships that could not handle rough seas was about as effective as an air force without planes.

The RAN patrol boat Wollongong was being towed towards Eden early today, after being pulled off rocks at Gabo Island, where it had been for almost three days.

The $10-million boat was moved off the rocks at 8.23 pm and towed out for flotation gear to be attached.

After work on patching holes in the boat’s hull, the man in charge of the operation, Commander Mike Webster, decided to take advantage of good weather and head for Twofold Bay at Eden.

The Wollongong was being towed by a merchant tug and was accompanied by another tug and the minesweeper HMAS Curlew.

At 3 am divers were still patching holes in the underside before the ship set off. A navy spokesman said: “The damage was less serious than expected. We have been lucky.”

He said the weather had improved enough to make the tow possible. The trip, at a speed of about four knots, was expected to take eight or nine hours.

At that rate, the Wollongong should be at Eden by noon today.

“We hope to make it at least to Cape Howe before any weather hits,” the navy spokesman said.

The successful salvage came just after the 8 pm high tide, after navy divers and private experts had worked all day, plugging holes in the hull and pumping water out of the engine room and living quarters.

A tug attached a towline to the Wollongong about midday while a commercial salvage barge waited in case it was needed to pump diesel from the fuel tanks.

Commander Webster said: “The weather has been absolutely marvellous, and of course that is the determinant factor.”