Home » World News » From the Archives, 1964: Hundreds hurt in wild crush to see The Beatles

ABOUT fifty young people were taken to hospital yesterday after a near-chaotic welcome to the Beatles by 20,000 outside the Southern Cross Hotel. 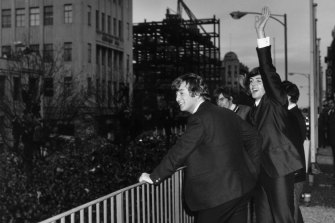 The Beatles wave to the fans from the first floor balcony of the Southern Cross Hotel, Melbourne.Credit:The Age Archives

Another 200 teenagers were treated on the spot, many of them in Red Cross stations set up in the hotel and in the Australian-American Club opposite.

Between Bourke and Little Collins Streets, there was one solid, swaying, chanting mass of humanity.

Mob hysteria was never far away. 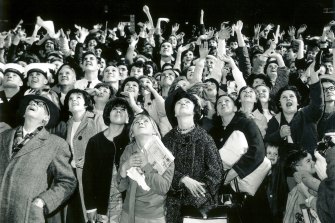 The crowd waits anxiously for the Beatles to appear at the Melbourne Town Hall in 1964.Credit:The Age Archives

Hospitals reported the Injured, none of whom was admitted, mainly suffered from faints, bruised ribs and hysteria.

Police estimate 250,000 people welcomed the Beatles at the airport, along the route and in the city.

As the crowd waited for the Beatles to appear on the hotel balcony overlooking Exhibition Street: 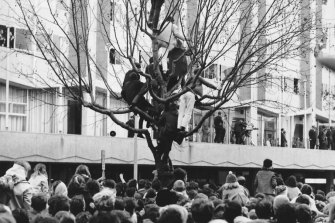 Fans wait outside the Southern Cross Hotel in Melbourne to catch a glimpse of The Beatles.Credit:The Age Archives

The Beatles, who had come from Melbourne Airport in a closed car, entered the hotel by a staff entrance in Little Collins Street.

Their welcome at the airport, by a crowd of 5000, was comparatively quiet.

Many of their young fans in Exhibition Street had been walling for hours.

When the Beatles appeared eventually on the hotel balcony, cheering and chanting rose to a crescendo.

The Beatles joked and laughed with the crowd for several minutes. At one stage, they gave mock Nazi salutes because the scene must have reminded them- as it reminded many onlookers—of a Hitler youth rally.

When the Beatles went inside the hotel, the crowd soon dispersed.

Inspector L M. Patter-son, of Russell Street, who was in charge of police operations, said that despite the casualties “things went all right. 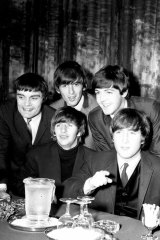 “It was hectic for everyone concerned from the airport into the city, but there were no bad incidents and no ill feeling either way.” he said.

Inspector Patterson said more than 25 police cars and 300 policemen were used to supervise the crowds.

During the “big crush” the lounge room floor of the Australian-American Club was like a battlefield strewn with bodies.

Crushing, foot and leg Injuries and hysteria cases were laid out on blankets and carpets all over the floor and propped up in arm chairs lining the walls.

They were brought in two entrances in a steady stream — some on stretchers borne by police and ambulance-men, some supported by friends, others carried bodily.

Many were unconscious when brought in, while others sobbed in pain, or were hysterical with emotion.

Girls outnumbered boys by 10 to one in the casualty room.

First casualty was Marilyn Arthur, 14, of Nathalia, who screamed so hard at the earlier airport arrival of drummer Ringo Starr that she burst a blood vessel in her throat.

At the Southern Cross welcome to the Beatles, unconscious people were passed over the heads of the crowd to get them to safety.

One policeman who had been on the job for three hours before the Beatles arrived described it as “The second battle of Flanders.

“They pushed forward 20-ft. taking the barriers with them. We muttered all our strength and pushed them back 15 feet. Then the whole thing started all over again.

“It was frightening, chaotic and all rather inhuman.”

By contrast, the airport arrivals of Ringo Starr and the main group—for which greatest fears were held—were almost uneventful.

One of the tour organisers, unaware of the Southern Cross crush, said: “It looks as though our public appeals for fans to keep away from the airport have been successful.”

The group alighted from the plane, waved to their screaming idolisers and swiftly completed two circuits of a special reserve for Beatle fans in an open truck.

The earlier arrival of drummer Ringo Starr and the group’s manager, Mr. Brian Epstein, was at least livelier.

Ringo, whose departure was delayed by a severe bout of tonsillitis and laryngitis, left London on Friday and arrived at Melbourne airport at 9.55 a.m. yesterday.

More than 2000 fans – some of whom had been camped there since early on Friday—lined the wire mesh fence of a special reception area.

Frenzied squealing began when his airliner came into sight, and reached a crescendo that drowned even the sound of aircraft motors when the mop-haired drummer stepped onto the passenger gangplank.

Ringo, wearing a black corduroy Edwardian coat and carrying a large, pink-ribboned toy koala, looked tired and drawn as he waved an overnight bag to the fans.

Last night there were still groups of teenagers lingering in the hotel plaza and in Exhibition Street.

But the Beatles had an early night and made no appearances.

A spokesman said they were tired and went to bed at about 9 p.m. Police remained on duty at the hotel throughout the night.