A friend of the woman who accused Christian Porter of rape has told the Federal Court that she believed her friend was telling the truth and wanted the woman’s allegation to be made public after her death so that an inquiry could be held.

Jo Dyer, a theatre and film producer and festival director, met the woman in 1986 when the pair were teenagers. She gave evidence on Tuesday that she believed the allegations against Mr Porter should be made public after the woman took her own life in June last year. 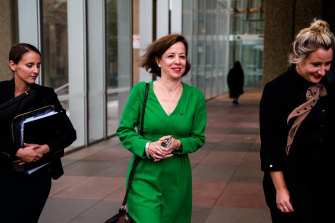 Jo Dyer, centre, outside the Federal Court in Sydney on Tuesday.Credit:James Brickwood

“I thought that, if all else failed, if they became public that would necessitate an inquiry into those allegations,” Ms Dyer said.

Ms Dyer is seeking a Federal Court order to restrain prominent defamation silk Sue Chrysanthou, SC, from acting for Mr Porter in his defamation proceedings against the ABC because of an alleged conflict of interest. An urgent three-day hearing started on Monday.

The court has heard Ms Chrysanthou gave free advice to Ms Dyer, who is expected to be a witness for the ABC, on November 20 last year and on January 27 and 28 about an article in The Australian newspaper. The article was published in November after Ms Dyer appeared in a Four Corners broadcast about Mr Porter and others.

The rape allegation, strenuously denied by Mr Porter, was not aired as part of that broadcast.

Ms Dyer said she did not have contact with the woman from the early 1990s until August 2019, when they reconnected in Adelaide.

“Is that when you say that she told you about her allegation that she had been raped by Mr Porter in 1988?” Mr Porter’s barrister, Christopher Withers, SC, asked.

Asked if the woman told her that “she didn’t want Mr Porter to become prime minister”, Ms Dyer said she “wouldn’t characterise it in that way”. 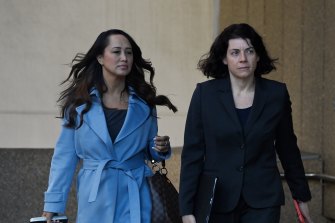 Sue Chrysanthou SC, right, and solicitor Rebekah Giles, both of whom are acting for Christian Porter, arrive at the Federal Court in Sydney on Tuesday.Credit:Kate Geraghty

“When she articulated that, she was saying that given how difficult it would be for her to pursue this case [through the courts], that a measure of success for her endeavours would be if Mr Porter did not become prime minister.”

She agreed that she believed everything the woman told her about the rape allegation and that she was deeply upset when she took her own life.

“And that you felt, did you not, that justice had not been done because she hadn’t at that point given a formal statement to police?” Mr Withers said.

Asked if she believed Mr Porter should never become prime minister on the basis that she believed the allegations were true, Ms Dyer agreed.

“After she passed away, did you have any discussions with her parents?” Mr Withers asked.

Earlier on Tuesday, Macquarie banker James Hooke, who has previously been described as a former boyfriend of the woman, said he would prefer not to discuss the nature of their relationship in a public forum. 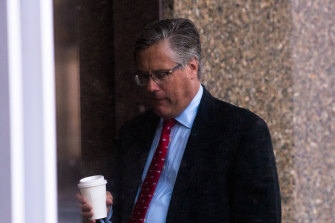 He said he released a statement on March 12 this year after he was mentioned in articles in The Australian and Adelaide’s Advertiser newspaper.

“That was partly the reason I put it out. I was [also] aware that there was an article that would be appearing in The Australian that Saturday where one of the authors of that article had made threats against me through an intermediary,” Mr Hooke said.

He agreed the woman was a “very dear friend” of his and said she had died “eleven months ago yesterday”.

Ms Chrysanthou and solicitor Rebekah Giles, who is also acting for Mr Porter, are expected to be cross-examined on Wednesday by Ms Dyer’s barrister, Michael Hodge, QC.